“There’s No Reason For You To Feel Powerless or Left Behind” (Runaways vol. 5 # 4 Review) 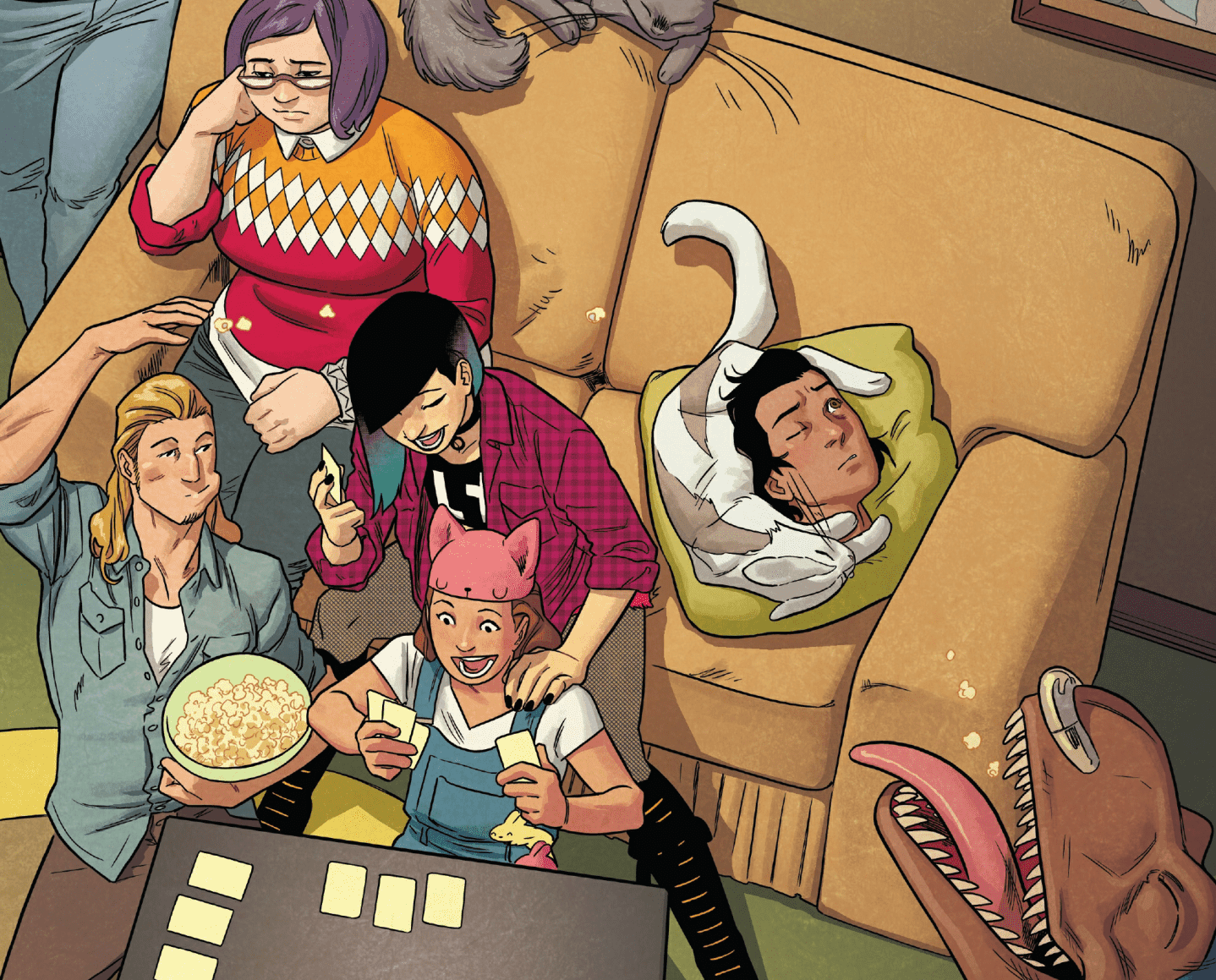 The Runaways visits their youngest member Molly Hayes who is now living with her biological grandmother. Gert’s intention was to have Molly rejoined the group. But, is Molly even ready to be a runaway again? 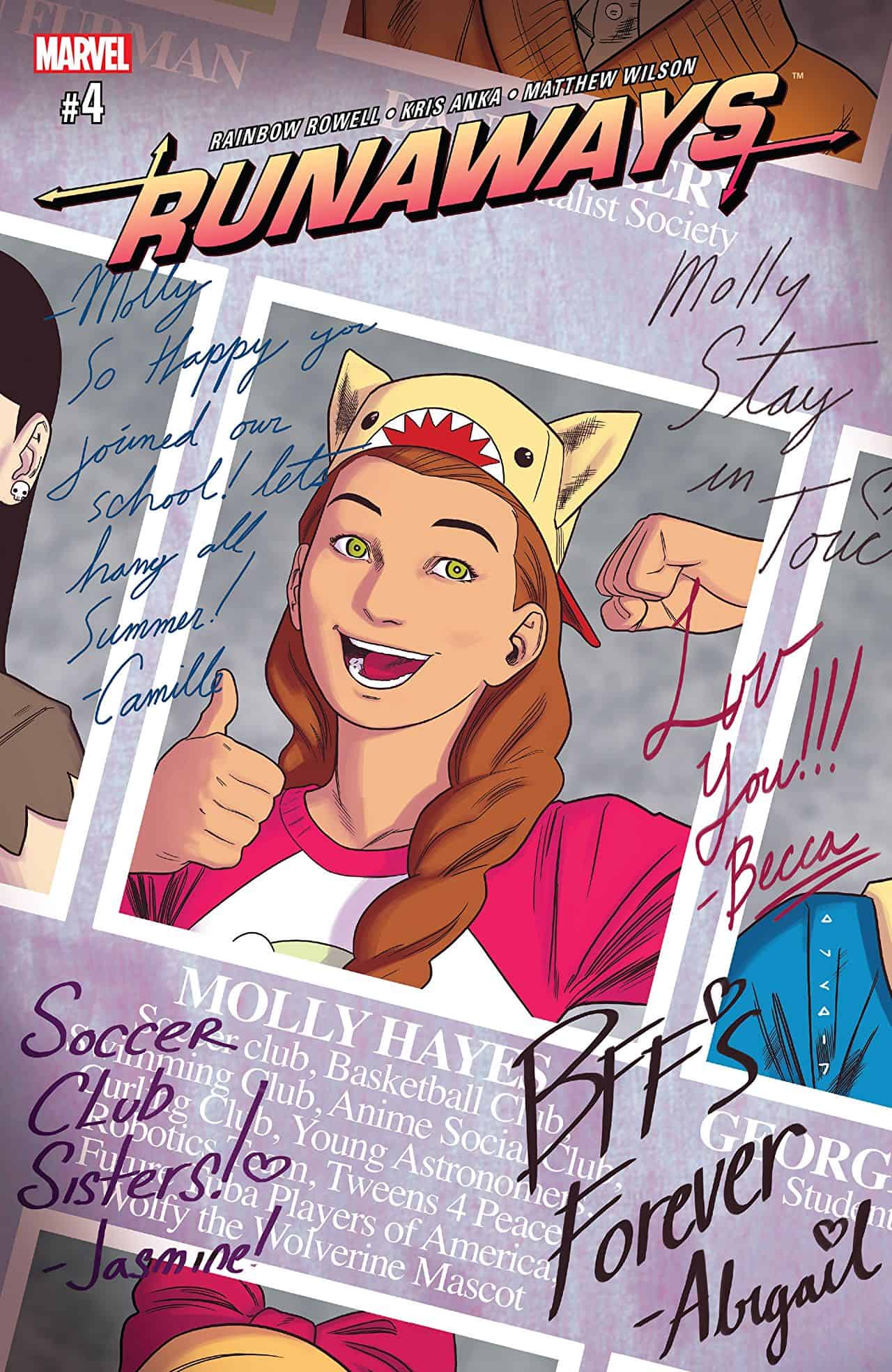 Previously:
Nico, Gert, Chase and Old Lace visited Karolina at her dorm who was also surprised to see Gert being alive again. Gert invited Karolina to run away with them. However, Karolina refused her invitation telling them that she is now happy with her current life. Gert got hurt and went back to their van, with Chase coming after her. Nico and Karolina had a talk about their current situation. Nico obviously understood and was happy for Karolina. Karolina, however, felt torn between her rejecting the only family she knew. Back in the van, Gert released her frustration to Chase who was trying to comfort her while attempting to repair the head of their android member, Victor. Nico came in to join them and told them that she was ready to become a runaway again, to Chase and Gert’s delight. Nico added that Karolina had made her decision not to join them. They then decided to visit their youngest member, Molly Hayes who is now living with her grandmother.

Nico, Gert, and Chase prepared themselves before they meet up with Molly and her grandmother. Unknown to them was the severed android head of fellow runaway, Victor secretly observing them. Meanwhile, Molly Hayes was arranging her trading cards when her grandmother called her. Grandma Hayes told her that she wanted to get a good blood sample from Molly before lunch. Molly obliged and while she allowed her grandmother to get a blood sample from her, she asked if one of her friends could come over after lunch. While they were discussing, they heard their doorbell rang. Grandma Hayes went to open the door to check who their visitors were. It was the Runaways, Nico, Gert, Chase and Old Lace. Nico told her they were looking for Molly and was about to introduce themselves. Grandma Hayes, told her it was not necessary because she knew them, called Molly and told her that her friends were here. Molly was surprised to see the gang especially Gert who is now alive. The Hayes then invited the gang inside for a snack.

Molly was happy to be reunited with her friend while they had grilled cheese sandwich made by grandma Hayes. Gert being a bit skeptical and cautious did not eat anything prepared for her. Chase then decided to also bring out Victor’s head and put him on the table. Both Nico’s and Gert’s disapproved of his actions, treating Victor like a plant. Molly was shocked and worried to see what is left of Victor but Chase reassured her that he was only in standby mode. After the group ate their snacks, grandma Hayes offered to help Chase with repairing Victor. Molly excitedly stood up and invited everyone to come up and see her room. Chase opted to stay behind while Molly grabbed Victor’s head from her grandmother. On their way to Molly’s room, Nico commented about the photos of Molly’s parents, mentioning that she did not know that they both grew up together and it was kind of odd knowing that the two had the same mutant powers.

When they reached Molly’s room, Gert took the advantage and told Molly to pack up her things and run away with them. Molly who was confused refused Gert’s invitation and told her that she already had a family to stay and live with. Gert got hurt by Molly’s reaction and walked out. Nico followed her and tried to talk to her about it which Gert shrugged off. 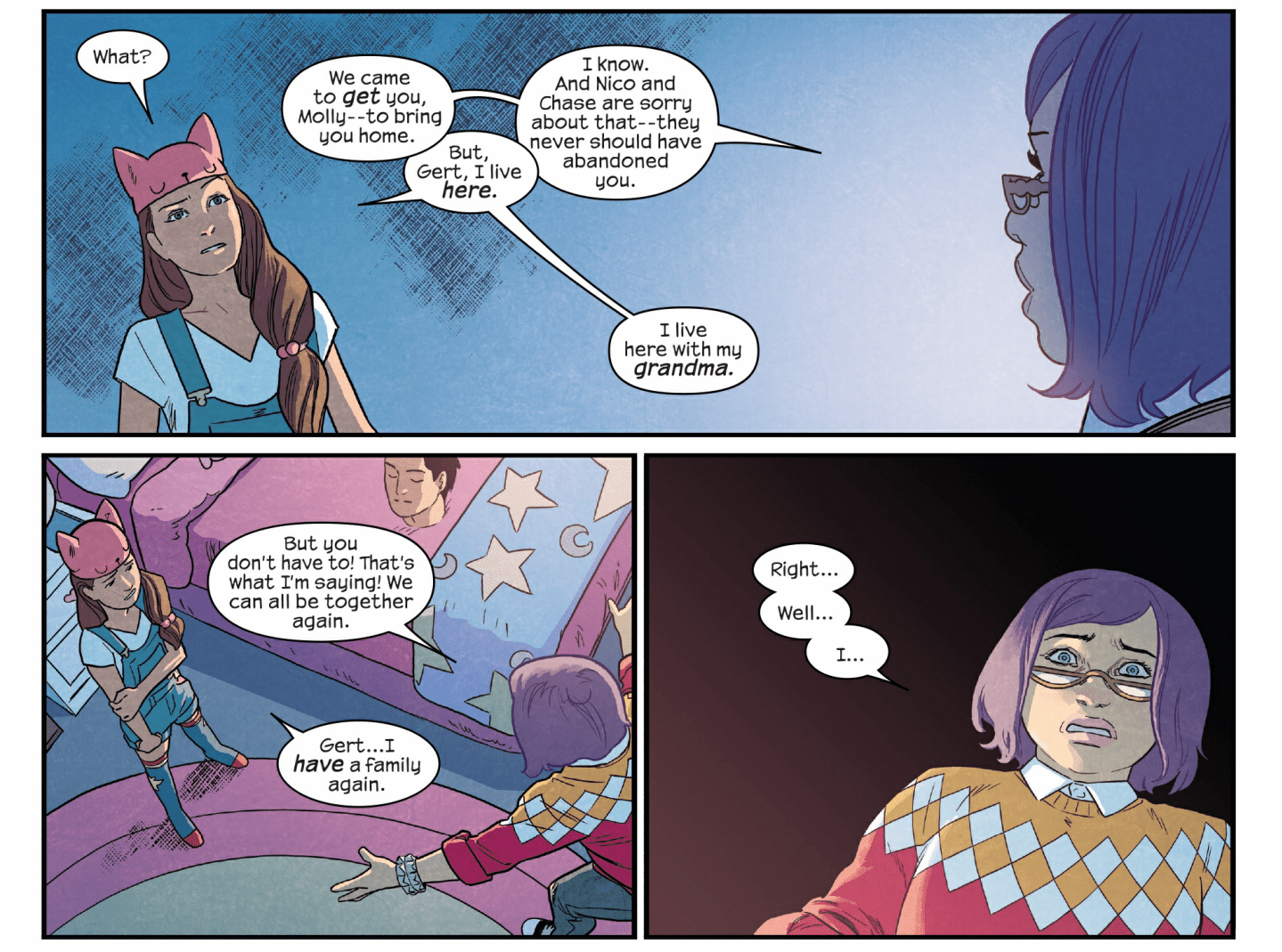 Inside, Molly tried to talk to Victor while poking at his temple. Victor’s soft spot towards Molly revealed that he was indeed alive and asked her how she found out about him. Molly responded that he saw Victor’s eyelids do an eye roll when Chase was not looking. Molly then commented about Victor condition of just being a head without a body in a funny way. She also asked him why he had not revealed to the gang that he was already awake. He responded that if they knew he was already alive, the gang would then expect him to make big decisions, the decision of being a runaway again. Molly promised him that she’ll keep their little secret. 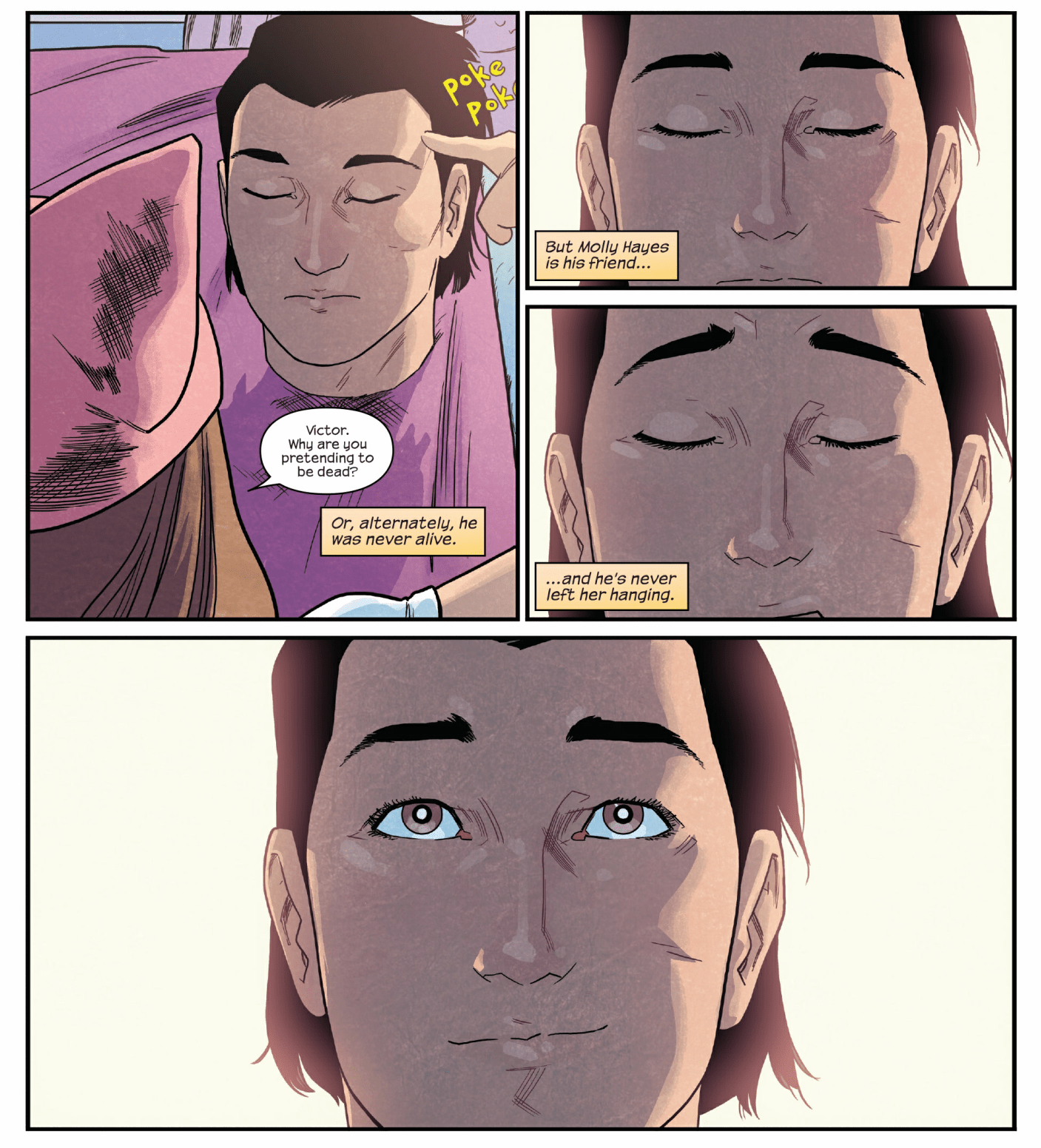 Downstairs, grandma Hayes had a conversation with Gert. She also asked Gert’s permission to pet Old Lace. Grandma Hayes then fed Old Lace a bowl of cat food. She then talked to Gert about how Chase explained to her how they had brought Gert back to life. She also talked about how she knew Gert’s parents and the Pride. She tried to comfort Gert by explaining to her that Molly always talked about her and that she was also there for Gert if she needed a family. Gert replied that Grandma Hayes doesn’t need to be a grandmother to her and that she did not want to become a burden. Grandma Hayes reassured Gert that she was not a problem at all. 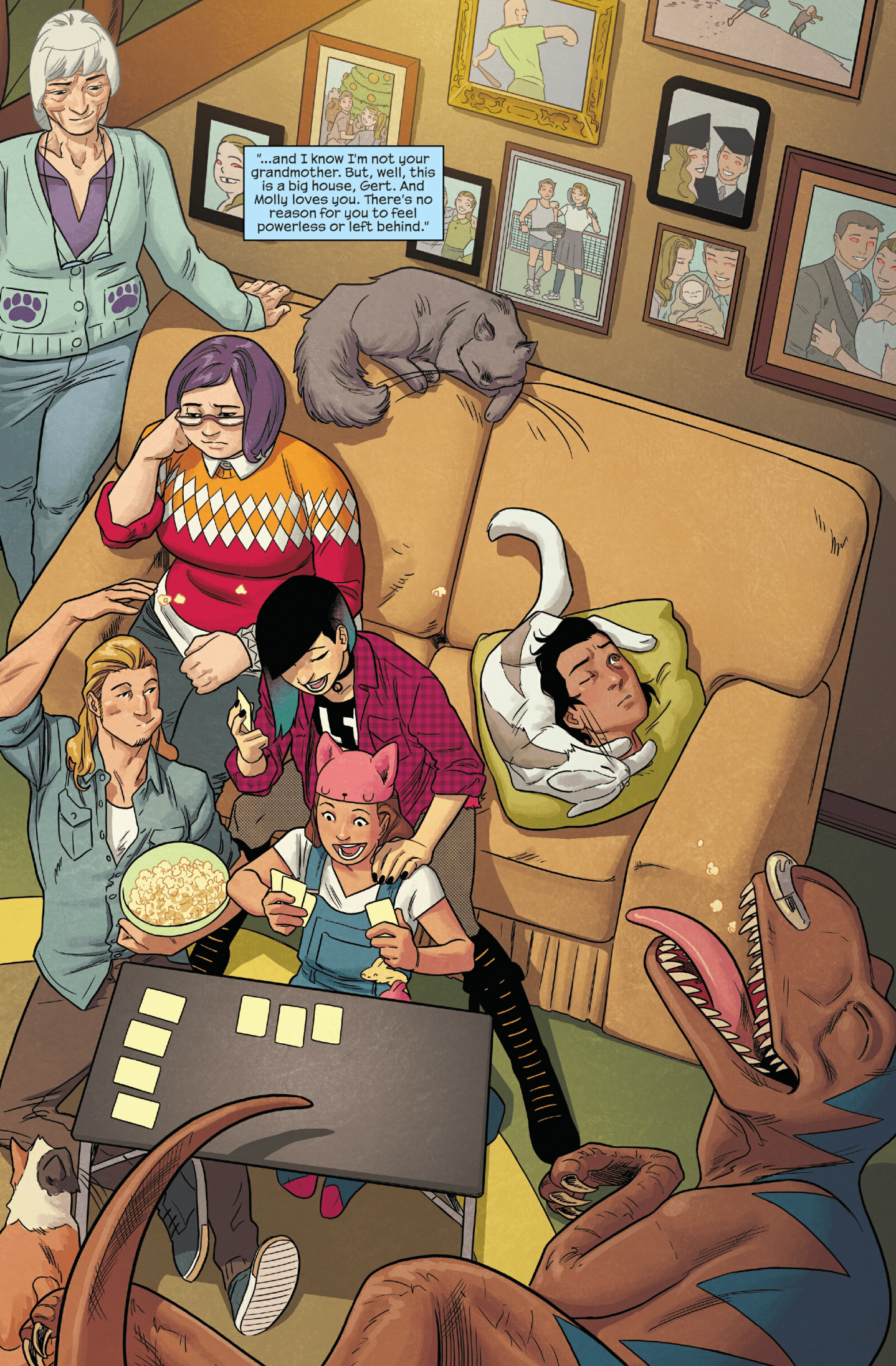 Later, the gang spent some quality time together, having fun that late afternoon on the sofa. After a while, Nico and the gang were preparing to bid their farewell and thanked the Hayes for having them over. They also re-assured Molly that they will visit her often and also attend Molly’s football game. Nico then called out Gert who then told the gang that she is no longer running away with them and that she had decided to live with the Hayes. The whole team was surprised by this sudden decision. Molly, on the other hand, looked worried after hearing this, while grandma Hayes looked suspiciously pleased.

A very fun and light-hearted issue featuring the return of the Runaway’s youngest member, and fan favorite mutant, Molly Hayes. I like how the whole issue captured the youth and positivity that Molly has always been throughout the series. That does not mean that Rowell did not put a bit of drama into the story. What would be a Runaways book without drama and emotional conflicts? Gert getting hurt again when Molly refused her invitation to run away with them was one of the conflicts we get to see in this issue. But this time, it gets interesting when grandma Hayes had a little to talk with Gert. Of course, as a reader, we all know something smells fishy with grandma Hayes and her cats, but I guess we still have to wait a little more to find out what’s up. Especially, after we saw Molly getting worried that grandma Hayes was able to convince Gert with something I think I should not spoil (but I still mentioned it earlier LOL.) Another thing I enjoyed was, of course, Victor getting highlighted in this issue as well. Plus the fun little chat he had with Molly. Although it is still unsure if this is the same Victor we know or if this is already his villain self, Victorious who is keeping a low profile. Everything as of the moment remains to be seen. That is the only minor downside of the series for me, the slow pacing of the story. It’s not a total con though because the story is still exceptionally well written and entertaining.

Kris Anka’s visually stunning art does it again on this issue. He did an awesome job with all the attention to details he had added and a few Easter eggs you find within the pages. I could never get tired of his art style and I love the way he had drew pre-teen Molly being the vibrant character that she is known for. Colors by Wilson was also something that should be mentioned as well since he did an excellent job. He had made Anka’s work livelier and more worthy of its praise. The texture he adds and the mood he delivered with the book’s colors were perfect in every way.

A very fun book to read that contrast last issue’s dramas. Rainbow Rowell delivered a very consistent and well-written story. The gorgeous art and colors by Kris Anka and Matthew Wilson also managed to immerse the readers and complimented Rowell’s scripting very well. This issue is definitely another win for the series!