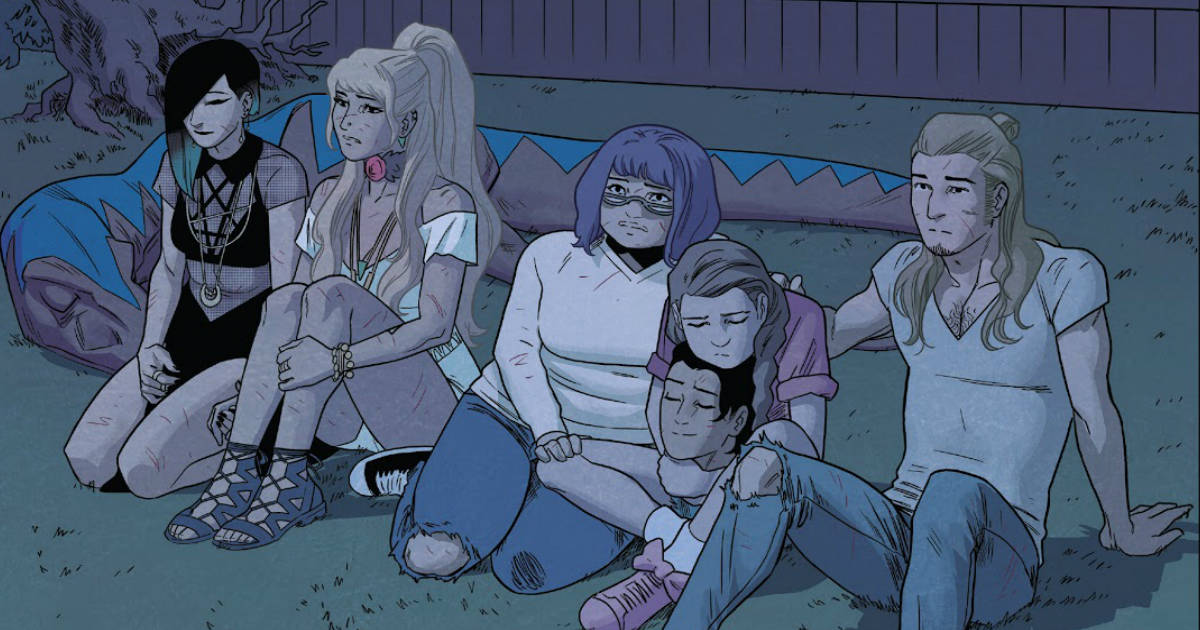 Dr. Hayes will not allow Molly and Gert to run away and she’ll do anything to keep them with her. Will the Runaways be able to stop her from keeping two of their own! Our thoughts about the heart racing conclusion for the first arc of the critically acclaimed series! 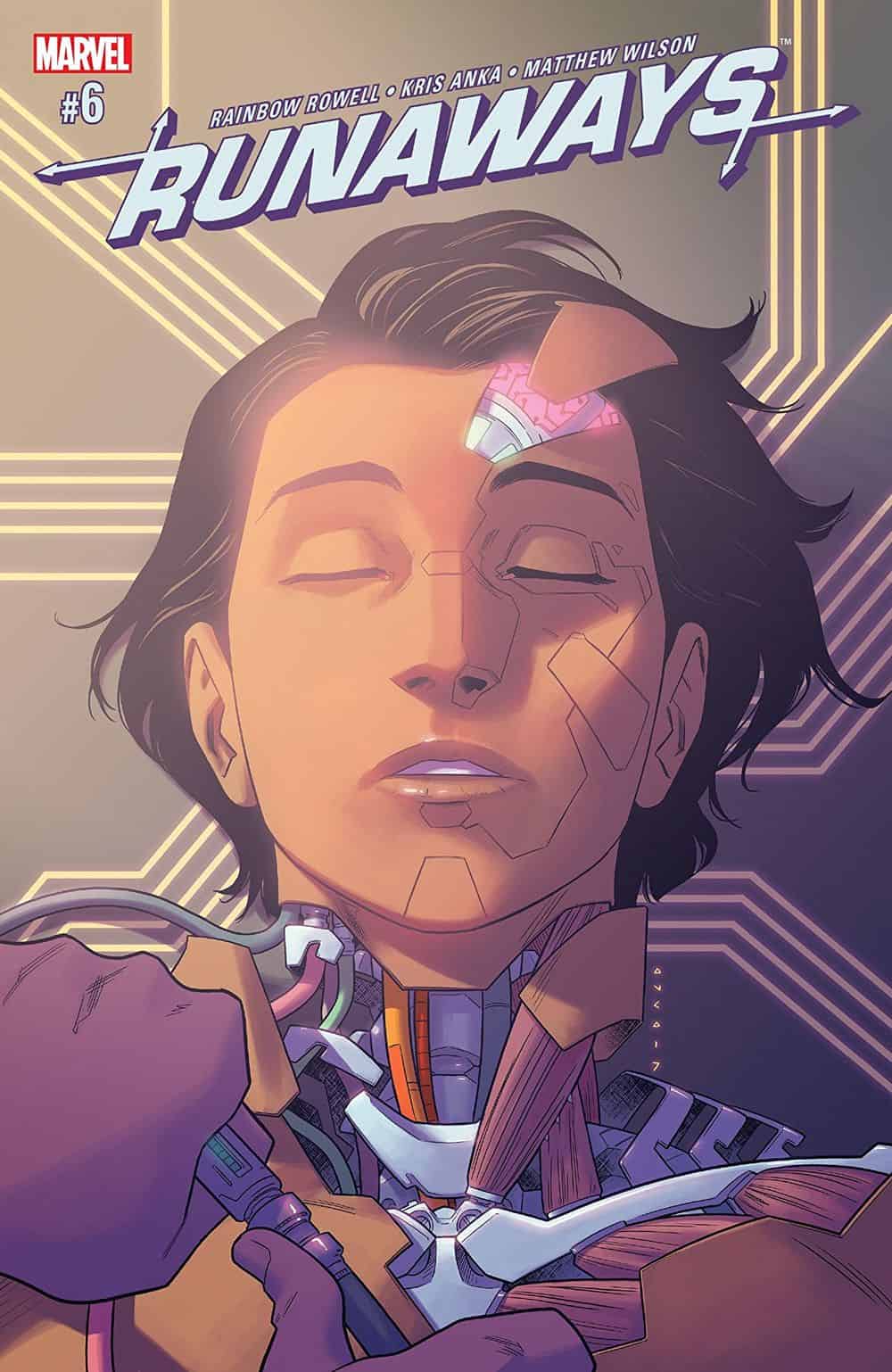 Gert was now living with Dr. Hayes and Molly. But Molly seemed worried as days went by. Dr. Hayes, however, was ecstatic and got DNA sample from Gert to test out. One day Molly finally spoke with Gert who told her that they had to run away. Gert got confused by Molly’s sudden change of mind and asked her why. Molly explained that although her grandmother was not a super-villain, she obviously had intentions to experiment and change Gert, which Molly did not want to happen. The two then agreed and decided to run-away. Also, Molly warned Gert to not think about their plans whenever they were around Dr. Hayes mind reading cats and told her to sing “It’s a Small World” to keep their thoughts distracted.
Meanwhile, Chase was venting out his frustrations towards Victor’s severed head. Out of annoyance, Victor revealed that he was already awake the whole time. Victor then told Chase that he did not trust Molly’s grandmother and the two decided to rescue Gert and Molly from her.
Sometime later in Nico Minuro’s apartment, Nico was talking to herself, frustrated about her limitation of using magic with the Staff of One. She then got an unexpected visit from Karolina. The two talked briefly which became awkward after Nico attempted to kiss Karolina. They were then interrupted when Chase and Victor barged in, announcing that they were saving Gert and Molly.
Back at the Haye’s residences Molly and Gert were about to run away but were caught in the act by Dr. Hayes. Dr. Hayes tried to stop them but the Runaways came on time to save and help their friends.

The Runaways arrived at the right moment to rescue their fellow members Gert and Molly. Gert was surprised to see everyone especially Victor who told her that Chase fixed him up. Chase felt proud of this statement but was then attacked by one of Dr. Hayes’ cat. The teenaged heroes then battled it out with Dr. Hayes’ telepathic enhanced cats. Molly who was in the middle of the chaos tried to inform her teammates not to hurt her grandmother. 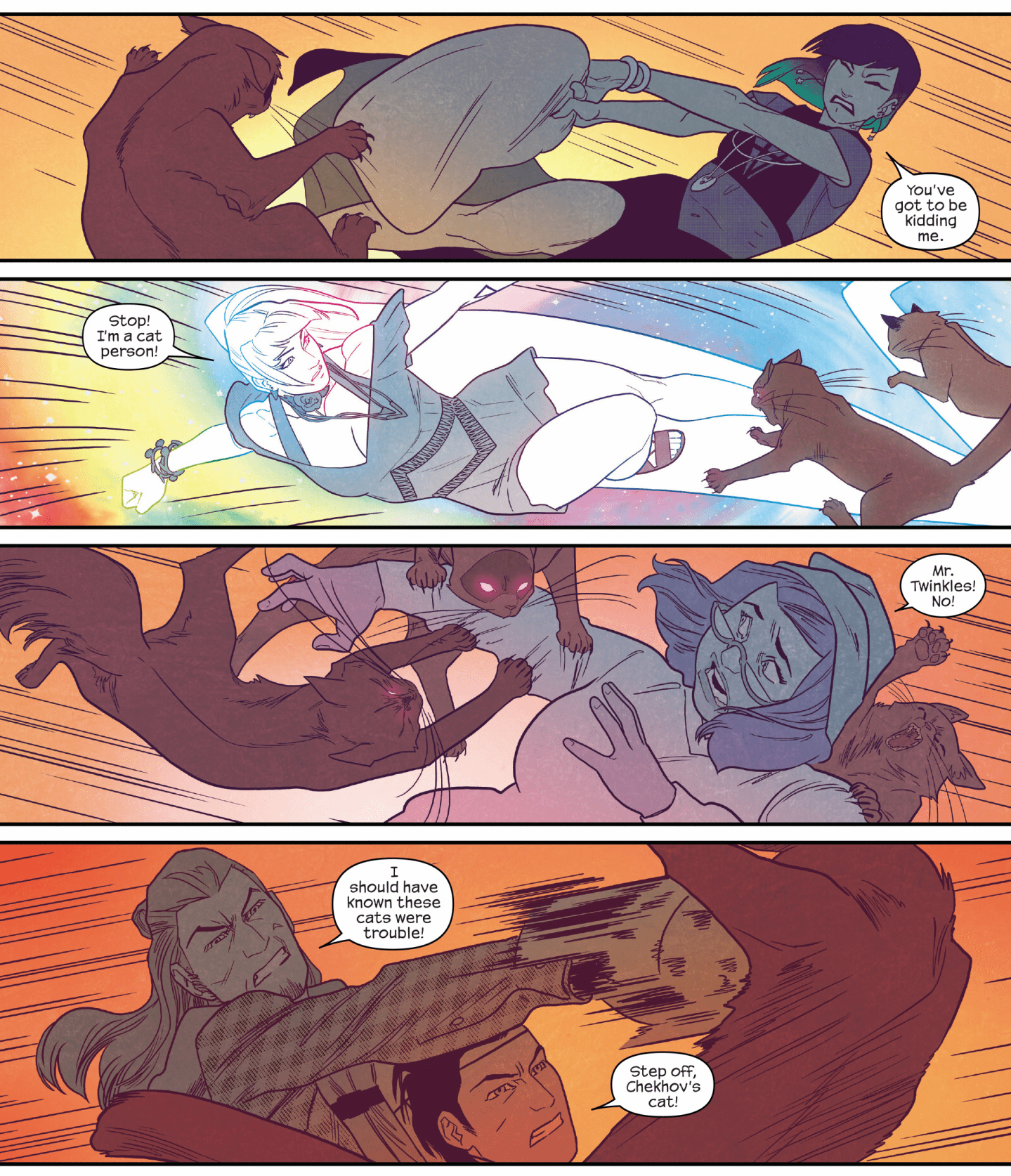 Dr. Hayes’ did not hold back and had the cats telepathically attack the teens (except Molly) all at the same time. This stunned the Runaways, giving Dr. Hayes’ the advantage. Dr. Hayes’ tried to convince her grand-daughter not to run away and even bargained that she will release her friends unharmed if she stopped this nonsense. Molly expressed her love for her grandmother even telling her that despite knowing her grandmother did some questionable experiments it was not equivalent to how evil her parents were. The only reason that changed her mind was when she feared that grandma Hayes’ might hurt Gert. Dr. Hayes’ responded that she wouldn’t hurt Gert at all. Molly then pointed out that Dr. Hayes’ was already hurting Gert that very moment. 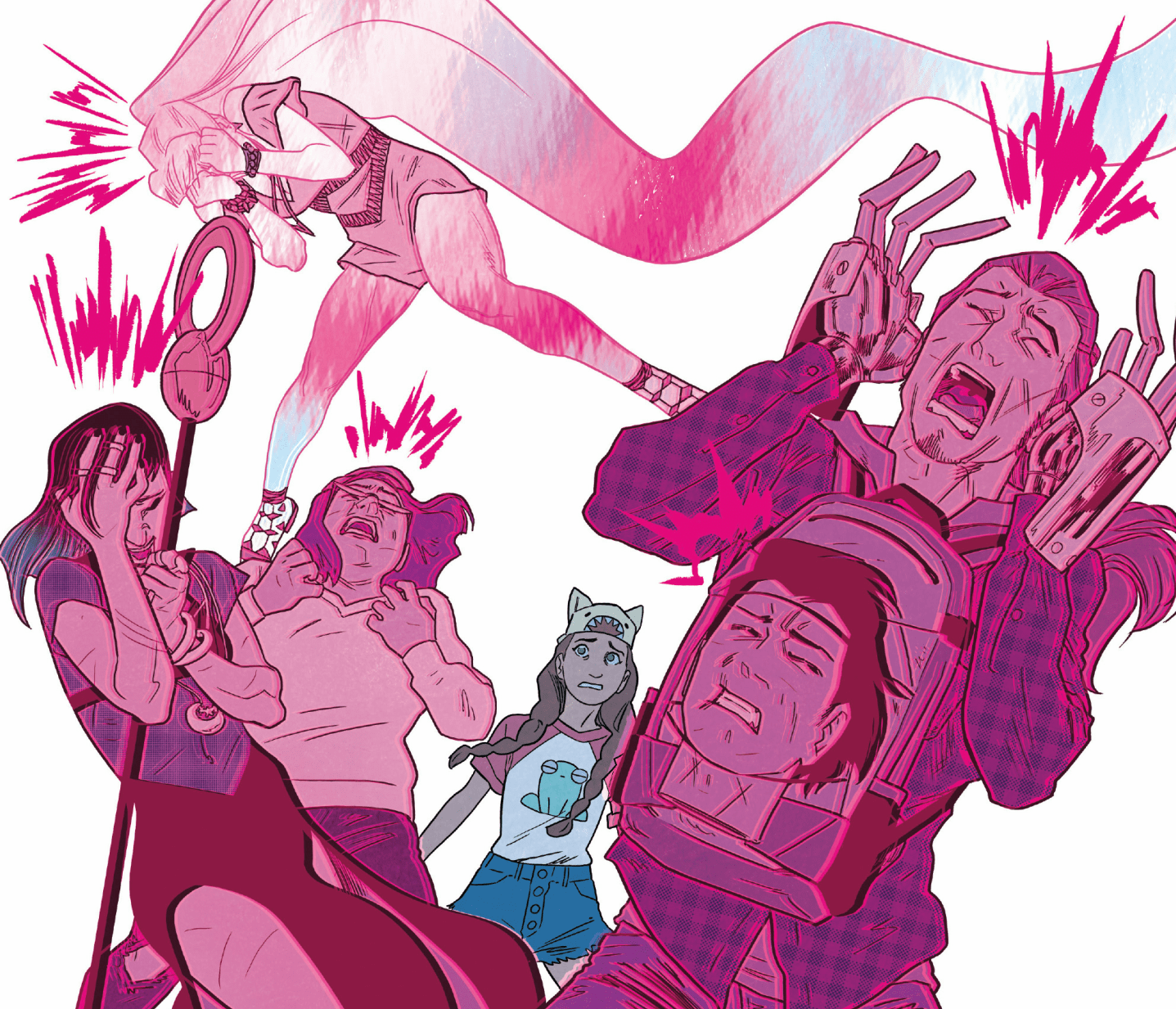 Dr. Hayes had one of her cats go down, while Molly shook off some of the cats to halt their mind hive attack from harming her friends. This then freed the teens from the cats’ psychic control, giving Nico a chance to use her magic to magically order the cats to jump out of the window unharmed. The teens then expressed how difficult it was to defeat someone who they couldn’t hurt and decided to just leave. 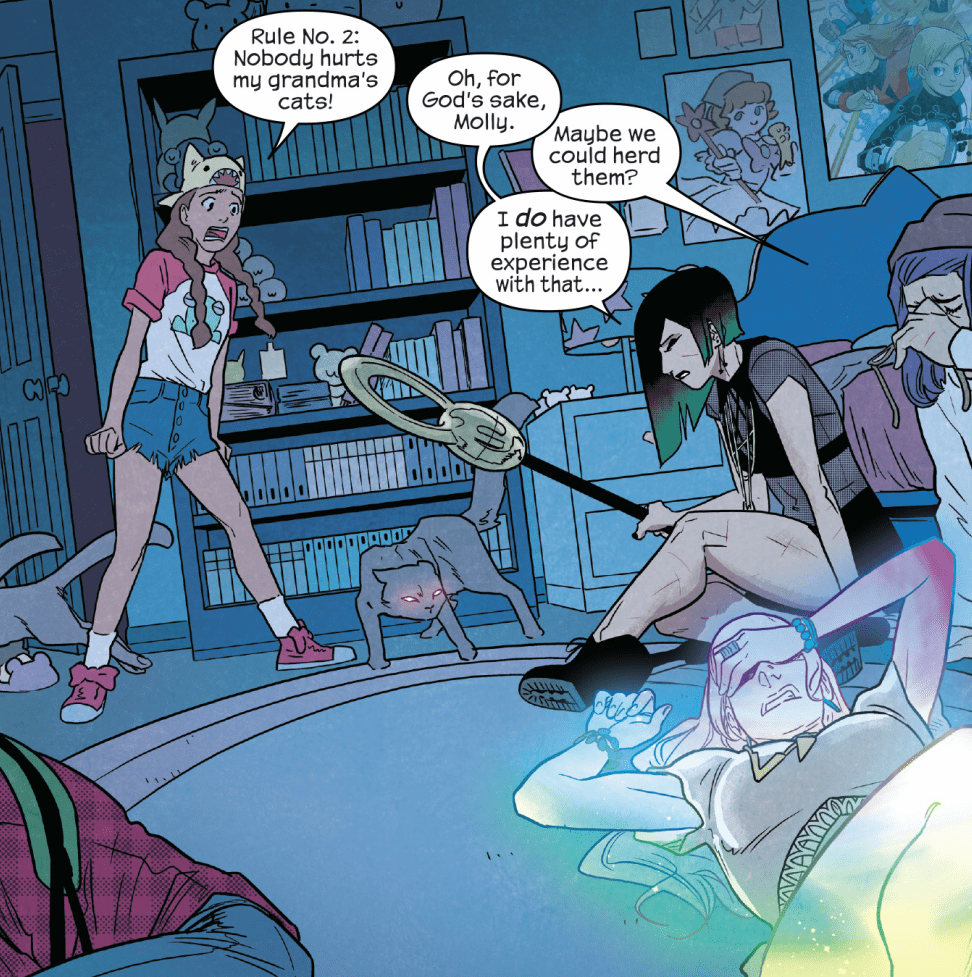 Dr. Hayes’ attempted to talk Molly out of it when all of a sudden another familiar voice interrupted and surprised the teens. It was Molly’s mom, Alice Hayes. Molly in shock, asked if it was indeed her mother. Gert, however, reminded Molly that Alice Hayes died alongside the rest of the Pride. Dr. Hayes, answered back stating that they were all wrong and revealed that she cloned Alice Hayes, and planned to revive Gene Hayes too. Molly, looking broken-hearted and still in shock then made a decision by informing Gert that she wanted to leave. The two went ahead and escaped through Molly’s window. Dr. Hayes then told Alice to stop the teens from running away. Alice psychic powers were able to hit Nico’s mind which angered Karolina. Karolina decided to end the battle and released one massive attack. Outside Molly cried hard embracing Gert. 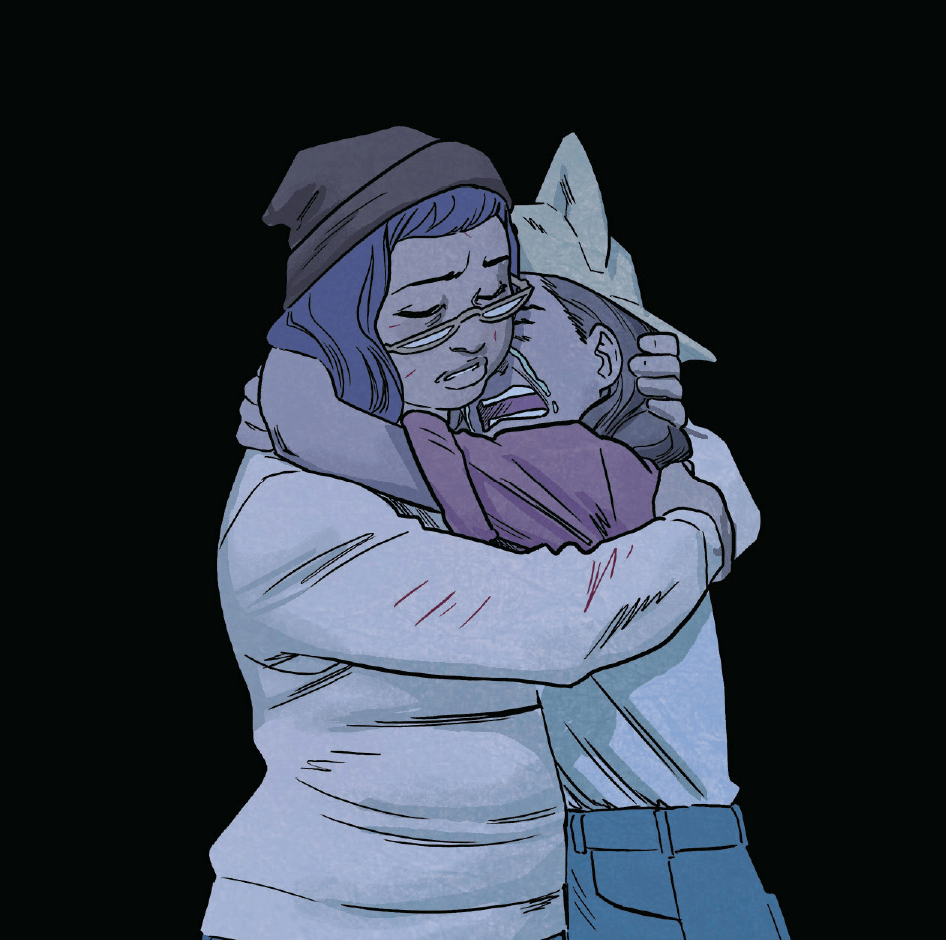 Later the Runaways tried to decide what to do with Dr. Hayes. They all agreed to report Dr. Hayes to the Avengers. The gang then saw one of Dr. Hayes’ cat, Rufus. Molly told them Rufus was the only cat who was on her side and asked Nico if she could keep him. Nico hesitant at first got convinced by the rest of the gang to have Molly keep Rufus. The teens finally decided that they all went home (wherever home was for these Runways.)

One thing was clear regarding this relaunch, and it was that Rainbow Rowell and Kris Anka made sure that they did justice to the characters, story and especially for the fans. Aside from that they also had to make sure that new readers wouldn’t feel alienated.

The first arc in general, I would say was definitely written with love and care. Because of this I really think that it paid off. Rowell managed to capture the personalities of the characters and also explore their weaknesses, insecurities and personal conflicts.

Focusing on this latest issue, it gave us another heart aching moment especially watching Molly struggle during the fight between her grandmother and her friends. Reading the whole story made me wonder what was going through Molly’s head during that moment and how she’ll take everything after this. I know we’ll still see her happy-go-lucky personality in the next coming stories, but I am also expecting that this event broke her and affected her deeply; growing up killing her parents and now defeating her grandmother who cloned her deceased mother. I mean really, that is one twisted thing to witness and experience growing up. Sometimes, I think this might be why Molly became a villain in one alternate future timeline. For reference, this was revealed back in 2013’s X-Men Battle of the Atom’s future timeline. Molly was part of the Brotherhood of (Evil) Mutants as Bruiser. I won’t go beyond writing my review making theories though, but it would be interesting to if this will get explored in the series soon. 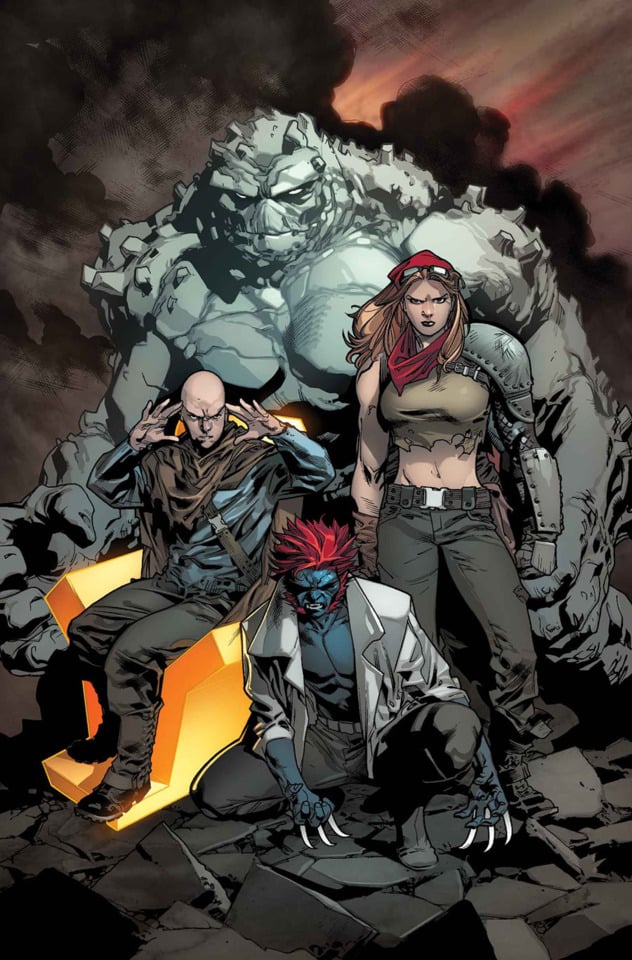 Kris Anka was of course still at his best in this issue. Trust me, everything looked gorgeous and I enjoyed how he still managed to draw these characters expressively well. What worked well with his beautiful, clean interiors were Matthew Wilson’s gradient-filled coloring. Wilson’s coloring gave life to all of the pages and magically set the perfect mood and atmosphere of the story. Trust me, the creative chemistry of these three talented people complimented very well and it’s hard not to praise them with their wonderful job on this book.

But unlike the last five issues, for some reason, the showdown or the plot twist that was revealed in the book did not really surprise or give me much of an impact. I’m not saying it’s a bad thing though, I mean I could go on for days praising the book. But I have to be honest, this issue lacked something. Or maybe it was because the battle between Dr. Hayes’ and the Runaways was too quick. But, it could be me though. All-in-all the book is still wonderful. I would still recommend this series to everyone.

It’s not perfect, but the amount of love provided by the creative team consistently delivered a wonderful job producing a high-quality story. The book will definitely capture and play with your emotions. It will make you laugh, excited, worried and even make your heartache. Runways is definitely a book I would recommend and the first arc concluded in this issue wonderfully, yet will still keep readers and the fans wanting for more!