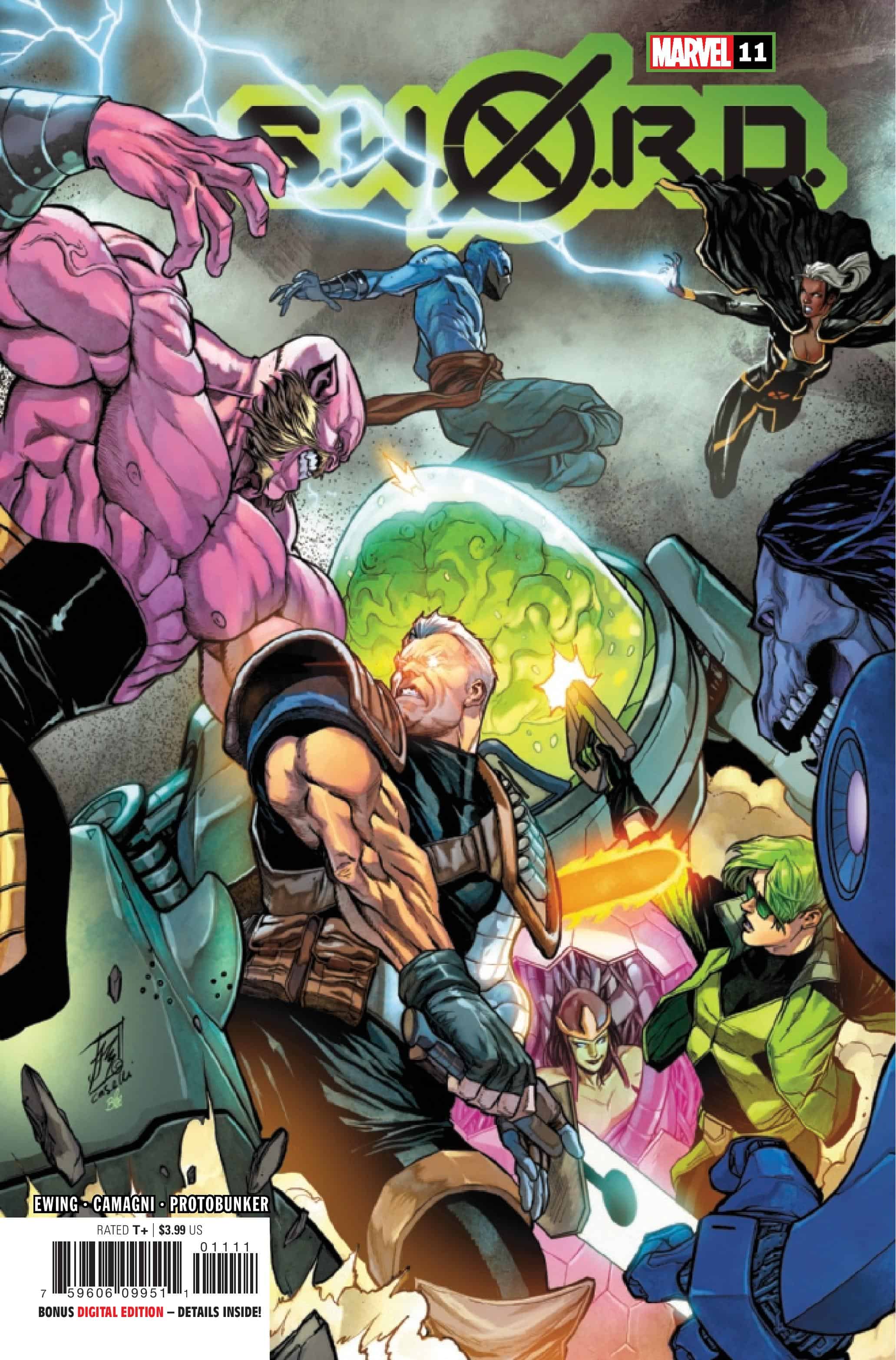 Sword Station One is crashing to Earth. The Lethal Legion is poised to destroy the diplomatic zone. Abigail Brand is ready to make her move. But how far ahead did she plan? How many losses will she accept? And how many bodies will she leave in her wake?

It’s the end of Al Ewing’s first foray into the X-World, and does it go out with a bang? Sort of? Ewing had to tie up a lot of loose, dangling plots, and unfortunately he wasn’t able to do that here. He did finish up the Taki/Gyrich/double/triple/quadruple spy plot, but there’s still so much here that remains unsaid. Hopefully the subplots will continue on with, what I can only assume is X-Men Red, after the upcoming Lives/Deaths of Wolverine weekly event that will launch a whole new host of books for the new Destiny of X era of the X-Men. Very little is known about this new era, but if the ending of this issue is any indication of what we can expect, prepare to be overcome with all of the potential the developments from this issue can produce.

Ewing’s strong suit has always been his ability to weave gold out of past events and characterizations, and he does especially well with Gyrich, who should always be an exceptionally arrogant, and annoying bigoted buerocrat, and he’s definitely that in spades. Unfortunately the ending of his plot as a part of SWORD and Orchis rang rather underwhelming. Another moment that rang rather hollow was Vindicator’s role in this whole thing. Mac is a character who hardly has his hands clean, and has a history of duplicitous behavior, but after his long association with Wolverine, Northstar, Aurora, and other mutants, he wouldn’t throw his hand into the ring of such an international organization. Mac has first hand knowledge of how corruption can destroy innocents, so his presence here never felt kosher. Where he goes from here will take Mac down a few paths that may make his character quite unredeemable.

Ewing’s Brand has been a real treat to read. While the humans have been playing checkers, and the mutants have been playing chess, Brand’s out here playing Risk, with a side of Settlers of Katan just to add to the strategies and strings she’s pulling, and I love that about her. Eden and Cable’s roles are almost afterthoughts here, which is unfortunate because Eden’s development in this title has been a very big boon for it.


Jacopo Camagni and Fernando Sifuentes are the art team here, and they’re putting in some quality stuff here. As I’ve said before, Camagni is an artist I’m not too familiar with, but it’s nice to see what he can do. Unfortunately we were spoiled by Valerio Schiti when this title first launched, that it overshadows all of Camagni’s work here. Given time, and honing his craft could launch him onto some big things to come.

I hope to see more of the cast that was woefully under utilized, such as Random, along with Voght, Risqué, and Frenzy with whatever book they find themselves in the coming year. Also I really hope to see more of Cortez. He was the surprise star from the earlier issues, and his absence has been felt. Ewing has loads of material to weave into gold from all of the dangling subplots that we didn’t get to see come to fruition, along with the new status that comes from this ending. If Ewing’s next book is half as good as SWORD, what comes next should make for one heck of a show.