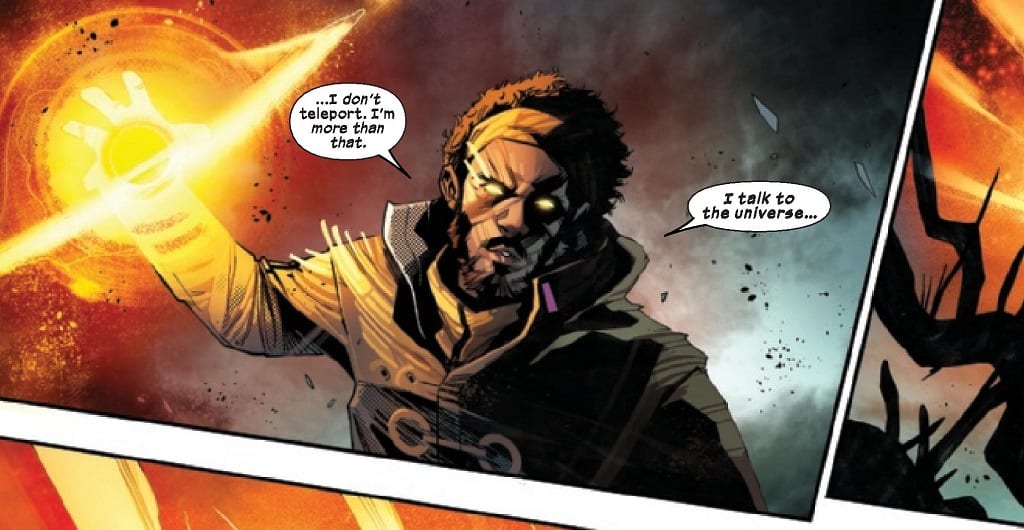 Knull has taken over Krakoa!! Wielding the possessed body of young Cable he has laid the island of mutants low, mutants are dying or imprisoned in darkness...is this the end? Has the sun set on the fledgling mutant nation and on the Earth itself,? Some like Abigail Brand think so and are preparing for the worst but Eden Fesi may have something to say about it...

Ewing demonstrates his ability to take us through a full turn in a single issue. He starts the issue with everything in darkness and exceptionally bleak, emphasizing it with a few quick mutant deaths, thrown in for effect. Knull stands seemingly triumphant over Krakoa, with only Manifold left to oppose him and all seems lost, while between Brand and Hope they argue over the best course of action to take as Brand tries to enact Protocol V, which is really a backup plan to save mutantkind and also some of humankind. Ewing does a great job of showing how Brand and Hope agree on the idea but not the timing. Ewing uses Manifold, Frenzy and to a lesser degree, Whizzkid as the focal points of the issue, and all of them get some really great moments as they get to show why they on the team and just how valuable they are as individual members of S.W.O.R.D. Joanna gets to kick some butt, and Whizzkid gets to show off his talents AND join the action in a very cool kind of way while Mentallo provides some comedy relief. However, the day really belongs to Manifold who goes head to head with the Knull possessed Cable, and it’s an incredible fight that shows that while Eden may not be a soldier like Cable, he is an exceptionally formidable opponent with an incredibly powerful and versatile powerset. Again Mutant cooperation is the order of the day.

Ewing takes time to pick up on things that have been established before including Cables deepening self-doubt (even though Magneto tries to offer the young mutant solace) and showing that recent events may have muddied Magneto’s view on things as he seeks to bring Cortez to the council for a debate about an amendment to a major law.

The art is once again brilliant, as we are used to by the Schiti, Gracia and Maher team. Starting in darkness in deep blacks and purples which is later combated with hot oranges and yellows from Gracia as Schiti pencils a fantastically dynamic combat scene using non symmetrical paneling and razor-sharp lines to bring us what may be one of my favorite fight scenes of the current era. There are several glorious splashes and oh yes have we said Schiti draws awesome tech stuff cause he does (see the tank and its “transformation” as reference), while the last single page feels exceptionally ominous especially with Magneto in that outfit. Shout out to VC’s letterer Ariana Maher who is fast becoming one of my favorite letterers at Marvel with lettering that flows exceptionally well through the whole issue and some great sound effects work.

S.W.O.R.D #4 is once again a very good example of how to tie a line-wide event into a franchise but still use the book to further the main characters' development as well as tie in several ongoing plot points established in other books in the Reign of X line. Throw in exceptional art from a superb team and there really is nothing to do but sit back and enjoy a thoroughly enjoyable read that ticks all the boxes.