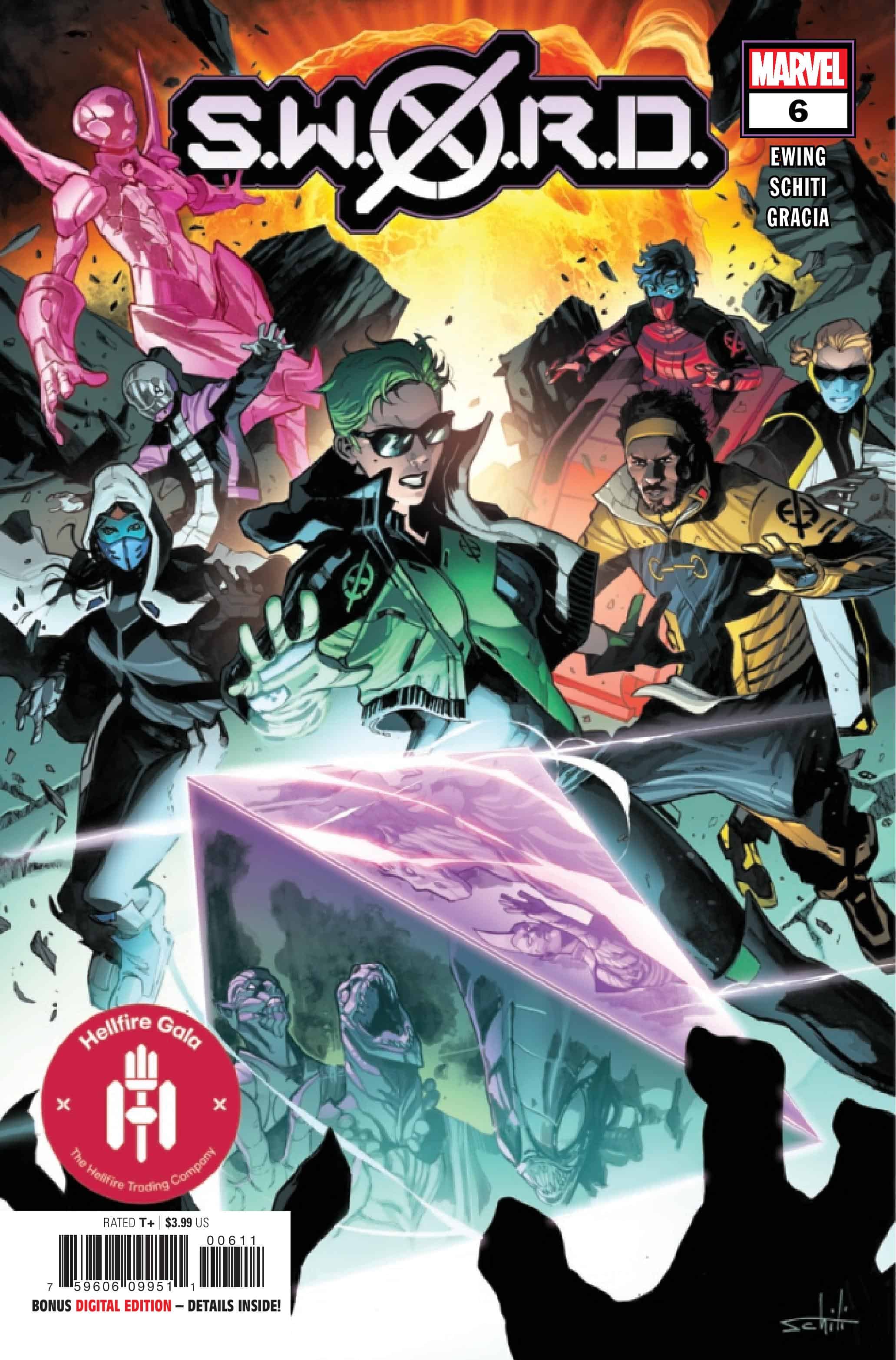 THIS IS WHAT COMES NEXT

On Earth, the HELLFIRE GALA is in full swing. But on S.W.O.R.D. Station One, a very different guest list comes together…as Abigail Brand finally unveils her plans for Mysterium – and the future of human and mutantkind.

This is what comes next… That tag line has been bandied about since the inception of this series and I have to pay Ewing and company the compliment of saying they have teased and tantalized us with snatches of what was to come this entire series. But now
the teasing is over and mutantkind’s plans stand revealed. (Ed. note: see Planet Size X-Men if you have for some reason missed that… turn back now and go no further till you have caught up cause spoilers ahead!)

So Mars has been terraformed by mutankind in a dazzling show of power and the aftermath has left many shocked and adrift. Ewing takes a moment to examine the reaction of Steve Rogers to what has occurred, his reflection which he shares with Doom. Ewing writes Doom superbly and is surprisingly melancholy and well-phrased, leaving enough wriggle room for several interpretations down the road. Doom, of course, as always has his own plans and leaves Cap on an ominous note.

Next, it’s bribery – literally! The entire middle section of the book reveals what the mysterious mysterium is that mutants have been stockpiling and how they intend to use it as Abigail Brand and her team (who look magnificent in their Hellfire regalia…Brand, especially in her Captain Harlock, looks phew) entertain cosmic guests that are not as impressed by the terraforming feats of before. Ewing ties in his current Guardians of the Galaxy run with the presence of Peter Quill and Nova in the meeting. The Intergalactic Empire of Wakanda is represented from Ta-Nahesi Coates’ Black Panther run, and so is the recently-installed Snark Monarch and several other guests who have appeared across multiple Marvel books in various runs.

It’s a clever reminder that while the achievements of the moment are grand, that there is a much larger cosmic stage that mutantkind has stepped onto. However, Ewing uses what’s been done in other runs to remind us that this story is very much part of the larger Marvel universe. Mysterium is a means to an end… a bribe to buy acknowledgment of Planet Arakko as the capital of the Sol system and reaction is varied although ultimately only one guest  representative declines the offer (which is interesting because they declined another offer at the beginning of HOX/POX, if this means something remains to be seen). 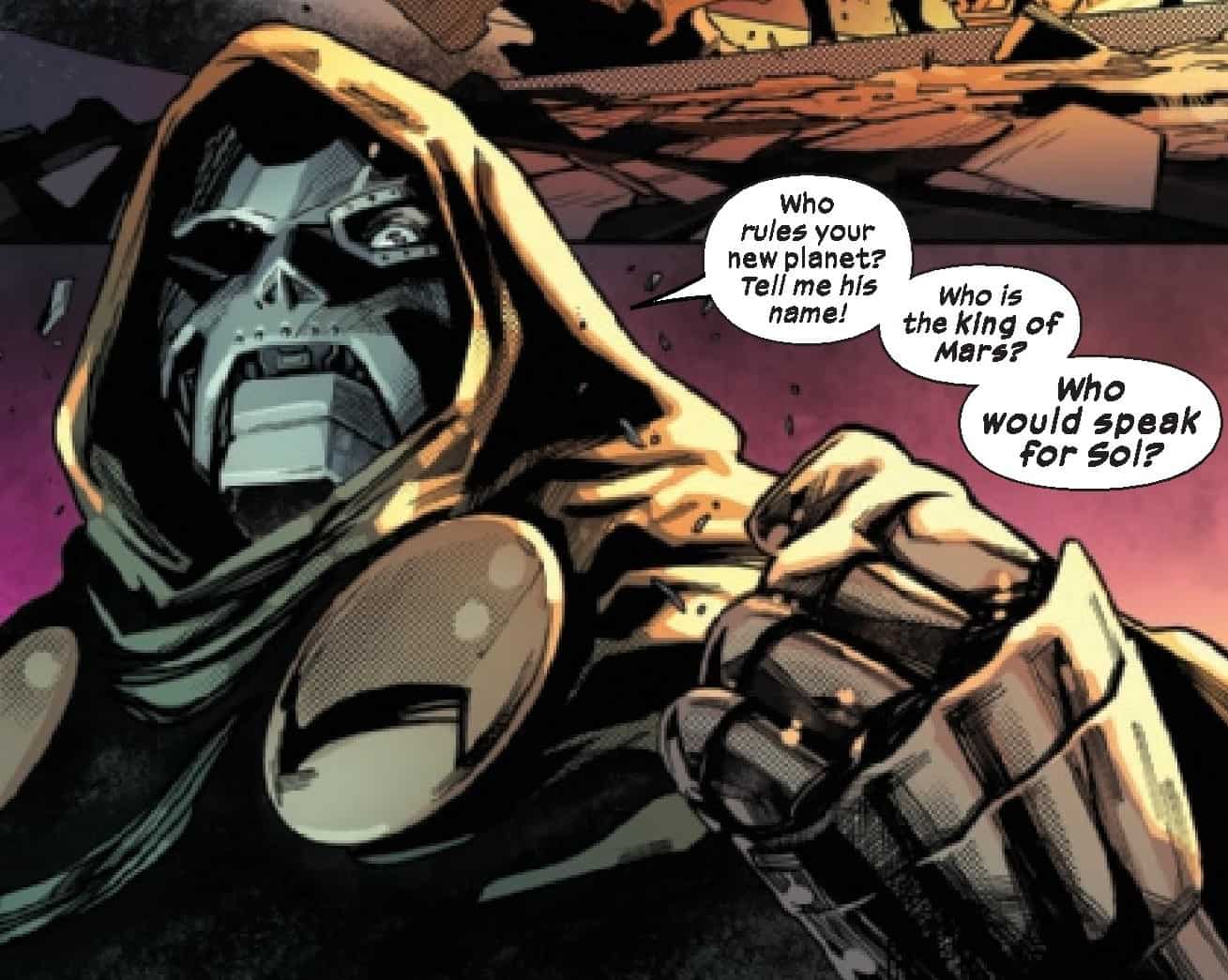 The next part, which we all saw coming if you saw the signs, reveals the regent of Sol in a magnificent splash page from Valerio Schiti as Doom arrives to demand who speaks for Sol and boy does he get his answer and it’s glorious! I said it in my review of Planet Size X-Men last week…the story possibilities for the regent of Sol are very exciting to me. It’s worth mentioning if you have looked at future S.W.O.R.D. covers Doom has a role in the affairs going forward as we are left with the reveal and immediately transported back to Earth for a reunion.

The last part of the book is a complete surprise to me I’m not going to lie, I did not see it coming. It’s at once poignant and touching but also ominous. Ewing does what no one else in the line has done with Magneto so far as he strips the iron façade of Omega mutant leader away and has him be exceptionally vulnerable. It’s the twist I didn’t see coming as Magneto reconciles with Wanda in a wonderful piece of meta-conversation that acknowledges the current canon and at the same time says who cares. It’s a brilliant piece of writing that definitely puts Magneto at odds with a large portion of not only Krakoa but also may be the lead into the upcoming Trial of Magneto book from Leah Williams. Regardless, it’s a beautiful moment to round out the issue. 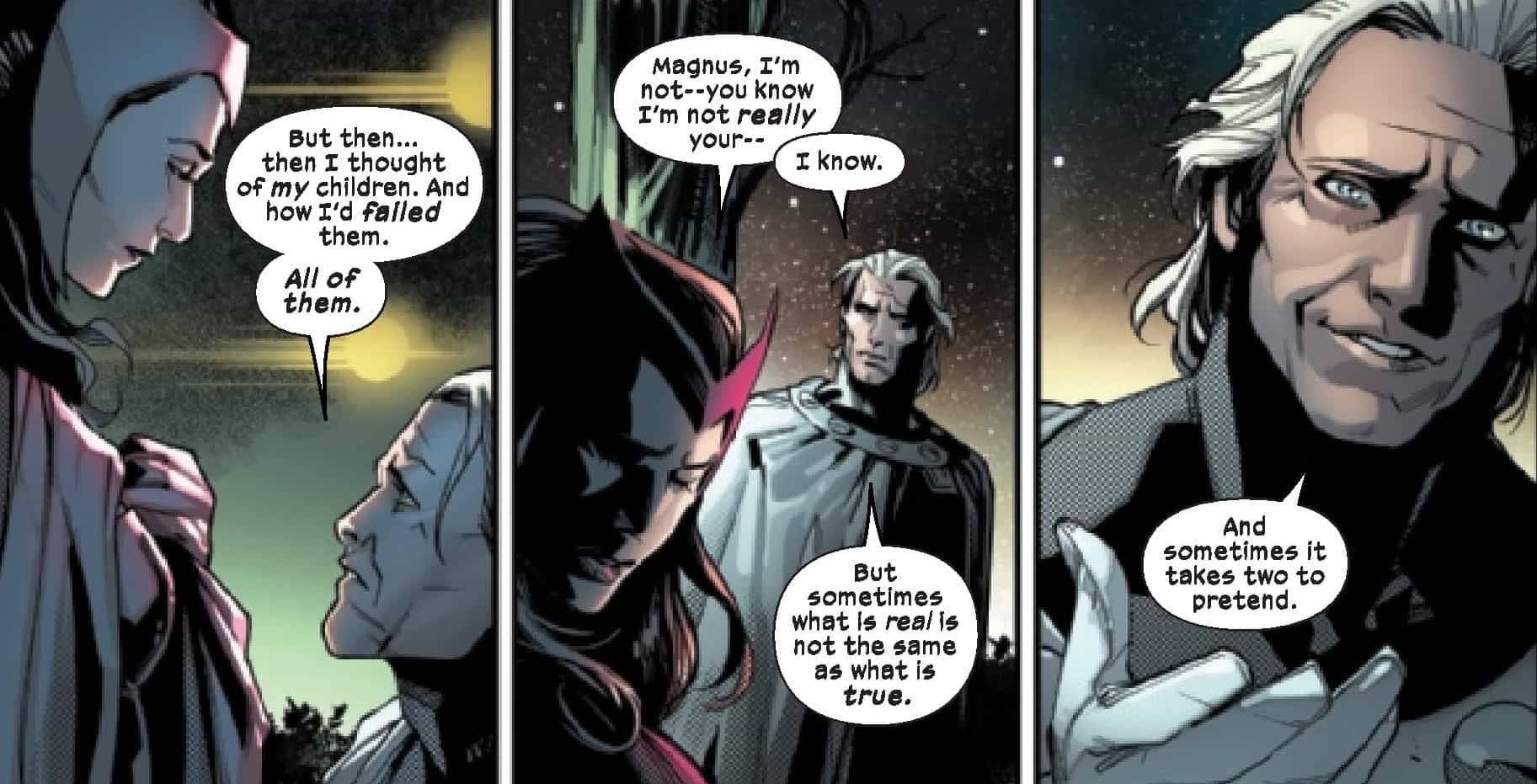 Valerio Schiti and Marte Gracia can do no wrong once again, Sumptuously rendered characters against the background of stars beautifully colored by Gracia, with the starry night sky bearing witness to it all. The caustic yellow and green of Doom versus the pure blue Lightning of the regent of Sol… it’s again a beautiful book from start to finish that runs a huge gamut of emotions from its start to its very last page and the art and color play a huge part in that. This was a red issue and boy does it deliver on that idea that it’s important the same way as Planet Size did last week.

S.W.O.R.D. #6 is about payoffs both literally and figuratively in a beautifully drawn book that does an exceptional job of acknowledging plotlines from before not only in the mutant storylines but also the entire marvel universe as a whole as Ewing shows just how adept he is in weaving the threads of what has come before and cracking the door open to show us a glimpse of what is to come... because this IS what comes next!