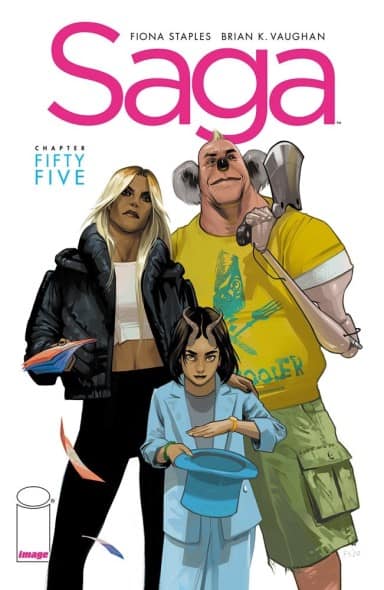 This issue picks up the story of Hazel, Squire, and Alana. After a three year hiatus, both in the real world and within the confines of this story, nothing is exactly what it was before.

There’s nothing quite like returning to a good book after a long break, although given the narrative structure of this comic (time passes here, as it does in the world we inhabit) the story we enter is not quite the same as the story we stepped out of. Three years have passed for these characters, as they have for us, and we’re thrown into an adventure that we don’t quite know — or fully understand.

Things are different after the death of Marko. Alana is juggling two kids, a couple of makeshift (and highly illegal) businesses. Squire stopped talking after the death of his father, and now he’s having to keep his screen in black and white to disguise himself as a commoner (a practice that probably isn’t helping his progress in therapy, not that Alana can pay the bill consistently anyway), and Hazel can’t understand why she feels so numb after losing the vast majority of her social group and family. She’s risking capture to boost records.

This was a double sized issue, and it still felt too short. Most of the main players resurfaced. Sophie’s at boarding school (no sidekicks allowed, sorry Lying Cat) and her remaining parent, Marko’s ex, is still pulling her various political strings. There’s a scene when she fucks The Will after he shows her the Marko’s skull (turned on by her vengeance and the accompanying change in her fortunes) that was absolutely chilling  — both due to the casual cruelty and disrespect she shows to someone whom she once claimed to love, and also because she was discussing her daughter with genuine love throughout.

But that’s very human, isn’t it? We’re all walking knots of contradiction. Love for this person, hatred for that. Gordian tangles that we can’t ever fully unpick but which death might sever. I have missed the deep humanism of this book, it’s fraught, bright, horrid, loving characters.

And its vital social commentary. There’s a reason, after all, that drug dealers deal drugs. There’s a systematic reason that single mothers struggle.

I was pleased to see that there’s only one cover for this story, and the price was the same as it always is. This cemented the fact that this is a continuation of something bigger, a metaphorical brick in the wall that Vaughan and Staples are building. The cover isn’t nearly as important as the contents. The art, as ever, is an astonishment. The deceptive clarity of Staples’ lines carries a remarkable emotional heft.

I’ve missed reading this book. I cannot wait to see what happens next.

This book is full of life, death, complex characters, desire, loss, love, and everything else. Welcome back to the Gordian knot.