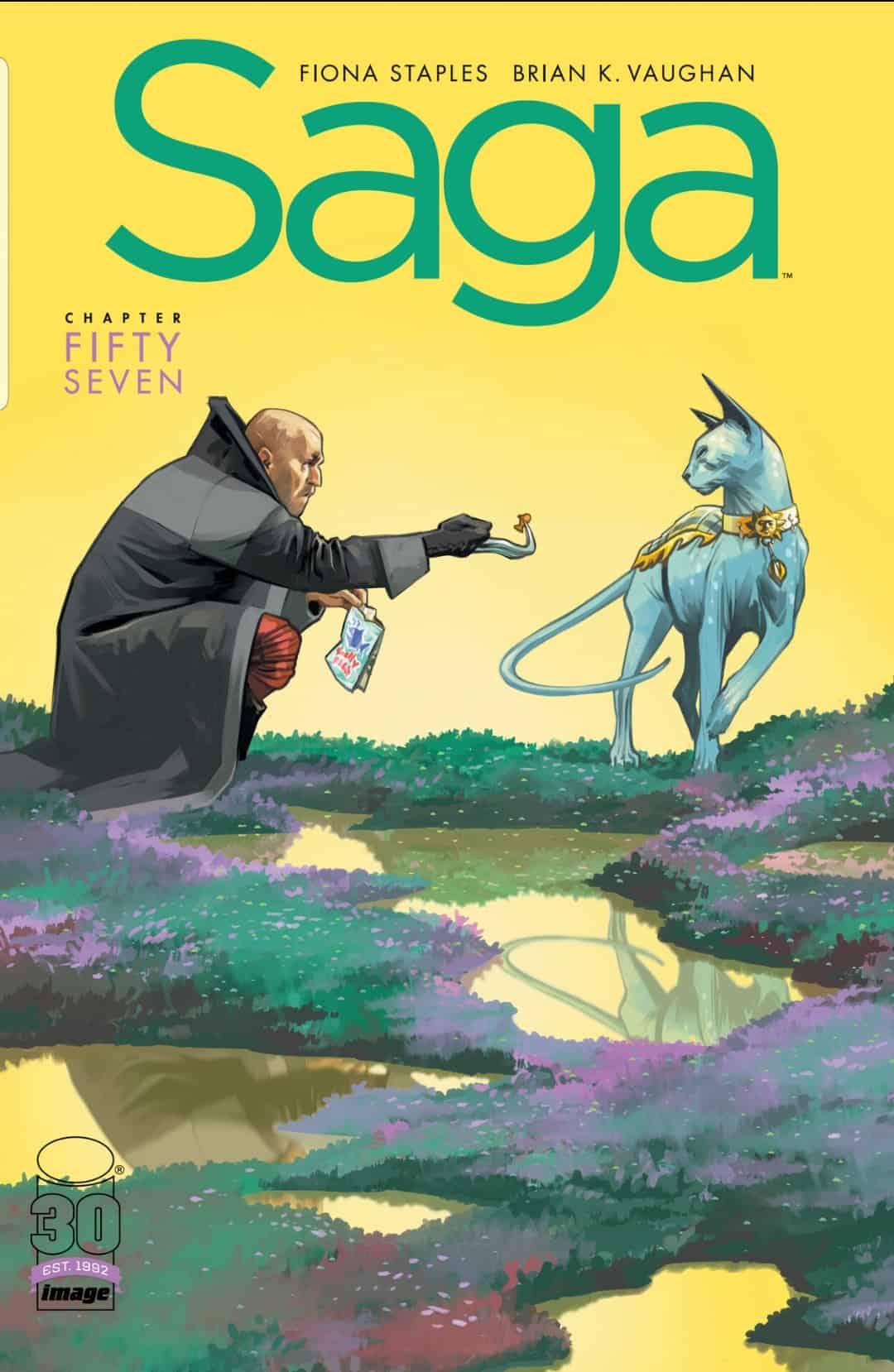 While Alana bluffs her fellow captain, The Will applies a thick layer of soap over King Robot's screen. Will these lies and subterfuges work out for anyone? Read on, to find out.

This review requires a trigger warning, for the discussion of the threat of child sexual abuse. Read on forewarned.

Brian K Vaughan severely overstepped himself last month. I could not review issue 56. I deeply resent that he slipped the threat of child rape into the story, as casually as he did, merely for the effect the shock would produce. The fact that this issue reveals that this threat merely existed to display Alana’s sacrifice (and nothing else) makes his stumble even worse.

That wasn’t the first time that Saga has dealt with the realities of child trafficking (the character of Sophie has blossomed from the root of that atrocity) but it was the first time that Vaughan has broken the threat out merely to stir up controversy. As a survivor of a series of rapes that occurred when I was almost exactly Hazel’s age, it was extremely disappointing to see a writer that I usually hold in the very highest respect use an experience that thousands (if not millions) of children experience daily as a means of shocking the audience and building up a suspense which was totally snuffed out in this issue.

I see, very clearly, what Vaughan was attempting to do — the sort of character he was straining to build with this threat, and his intended commentary about content warnings — but he failed so offensively, he caused such damage by his failure, that I could not write about it for a while.

It doesn’t help that the threat of a child’s pain was used as a motivating event for the parent, without acknowledging the damage that this causes to the victims, was doubly upsetting.

If anything, this issue made the previous ending worse. The threat of child rape was used solely as a means of shoehorning in the fact that Alana had her wings surgically removed — a revelation that could easily have been spurred by the fact that, as Alana stated to Endwife, she needed camouflage anyway. Alana’s damaged wing was infected. She was raising two children who seemed to be of different species. She needed the amputations. The threat of child rape was totally unnecessary to the progress of the story. And Vaughan used it anyway. Because he could.

There were some nice moments in this story. The protective code that Alana and Bombazine created was lovely. King Robot’s revision of history reflected a common behavior of abusive parents. Fiona Staples’ art was, as always, nuanced, tender, and occasionally shocking. Her character design is astonishingly beautiful and entirely well thought out. The tremendous overall quality of this story hasn’t been reduced by this asinine misstep — but it has been tainted. Vaughan will have to work quite hard to undo the damage.

This issue suffers from the damage inflicted by last month's cliffhanger ending. I'm not certain that the series can recover from this.