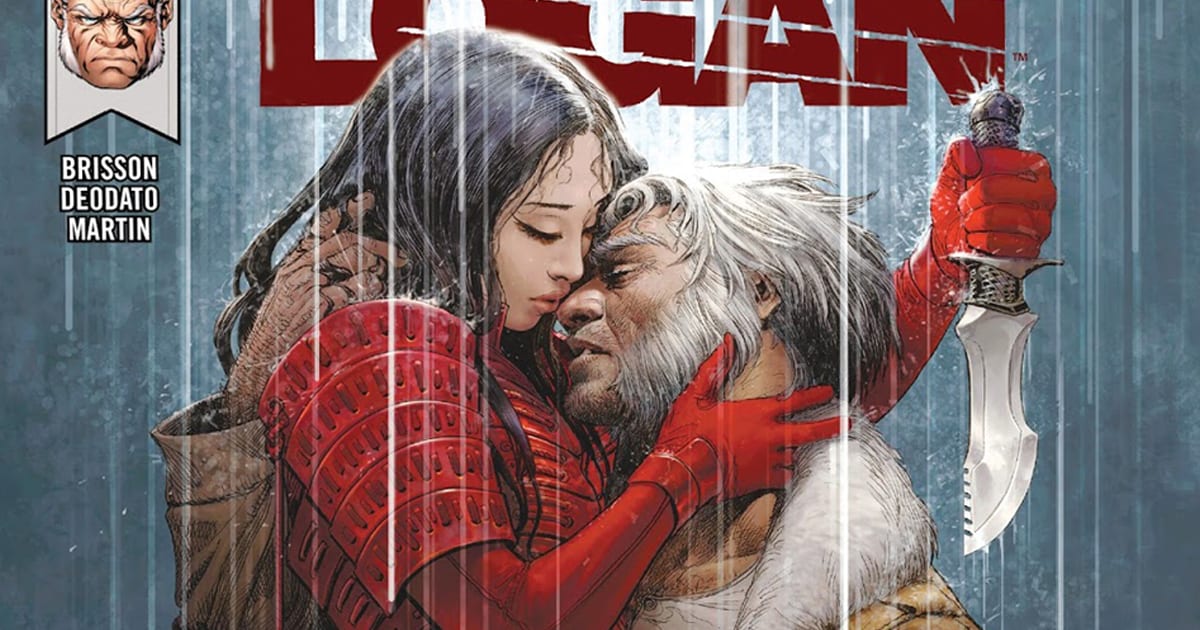 Logan, having defeated The Maestro and his Hulk Gang, now finds himself on familiar ground in Tokyo, but a new threat emerges! Who is the Scarlet Samurai? 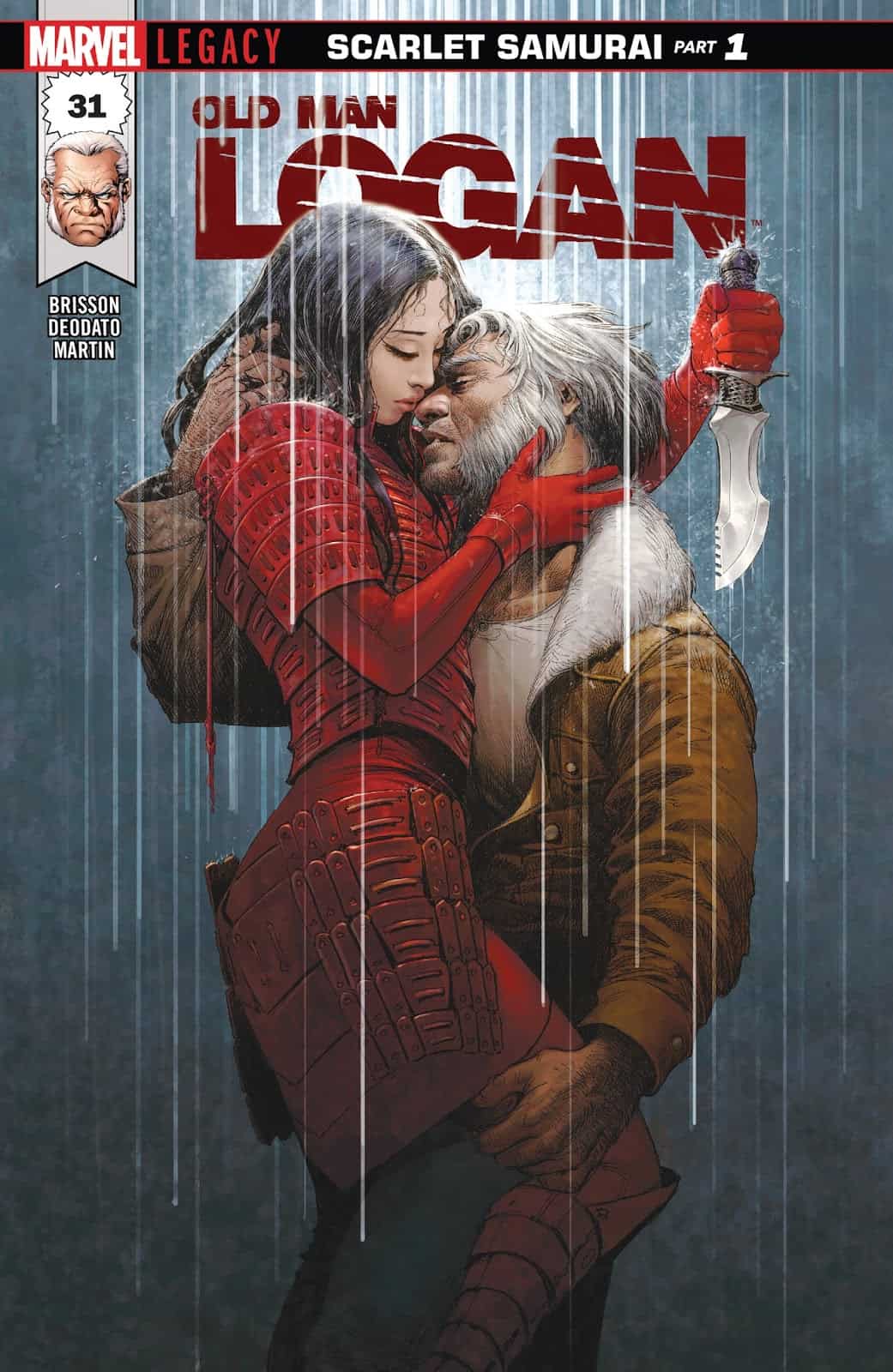 What You Need To Know:
Heading over to Kabukicho, Tokyo after his battle in the Yukon with the Maestro and the Hulk Gang, Logan becomes embroiled in a gang war between The Hand and Shin Harada, The Silver Samurai, son of the original.

What You’ll Find Out:
Walking through the streets of Kabukicho, Logan enters a bar. Just as he is walking in the door, a man is tossed through the front window. Several men with bats and chains begin beating the man for being a stranger on their turf. Logan offers to buy them all a round of drinks if they let the man go, but this does not quench their thirst for a fight, so they attack Logan. As fingers and arms are sliced off, Logan realizes these men are regenerating their limbs instantly. 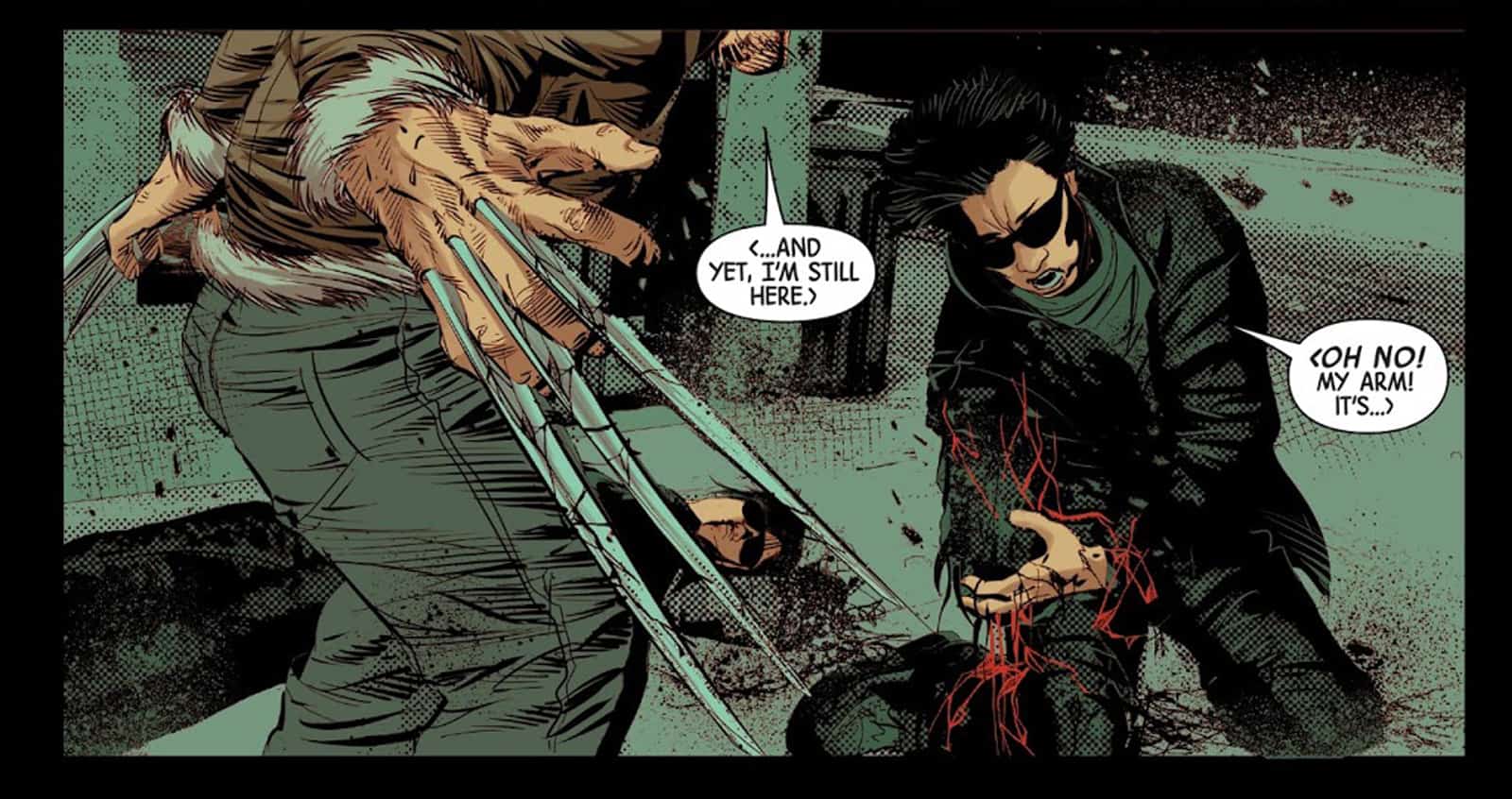 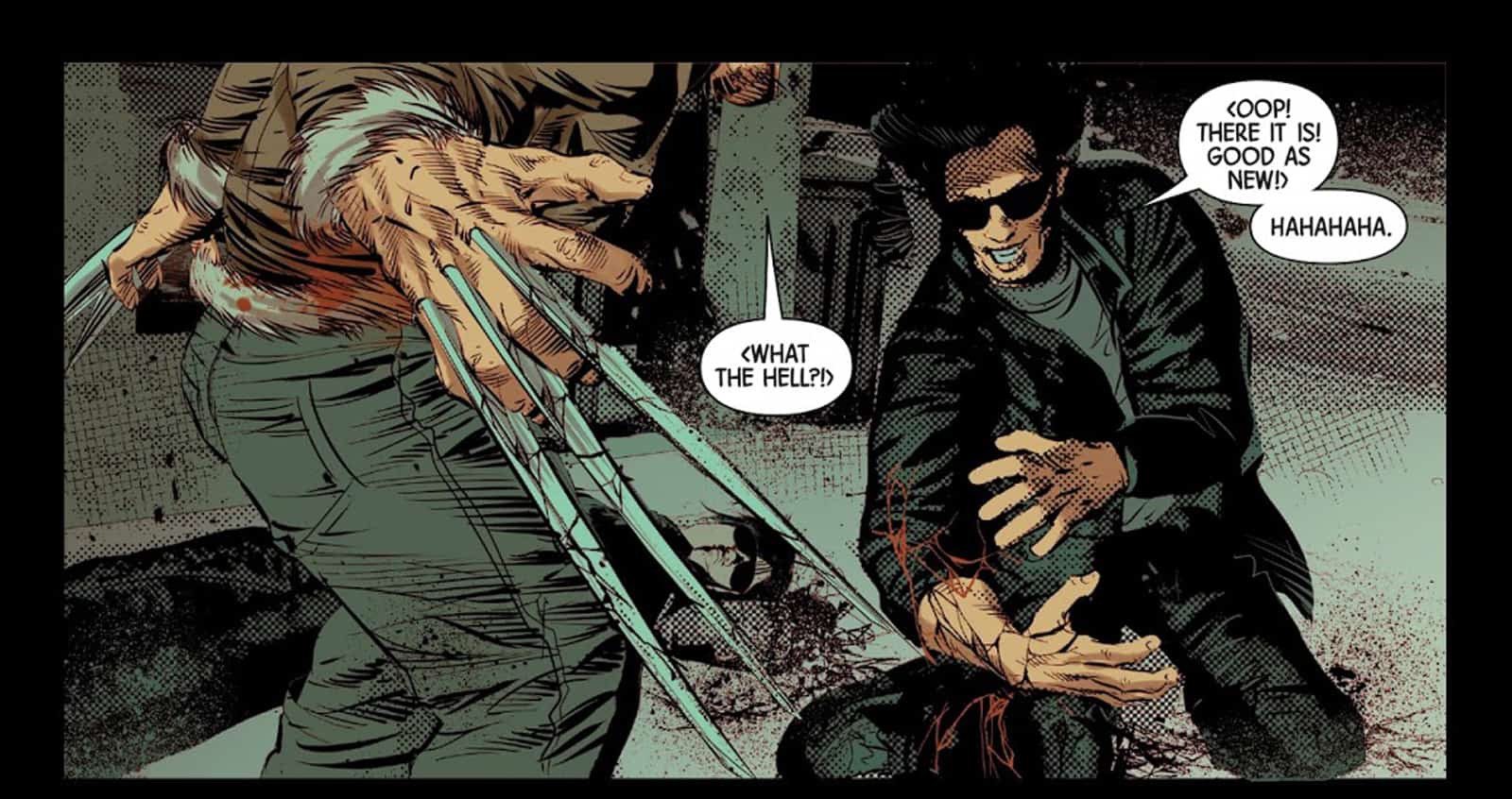 Switching his tactic to knocking them out cold, Logan questions one of the men, alerting him to the fact he knows they aren’t mutants or Inhumans. Threating to cut him faster than he can heal, Logan wants answers!
We switch scenes to the Yashida Corporation Tower in Tokyo. Scientist Touko Kenmochi is working late, but it’s obvious there’s more than just “work” going on, as he steals vials of a glowing liquid. 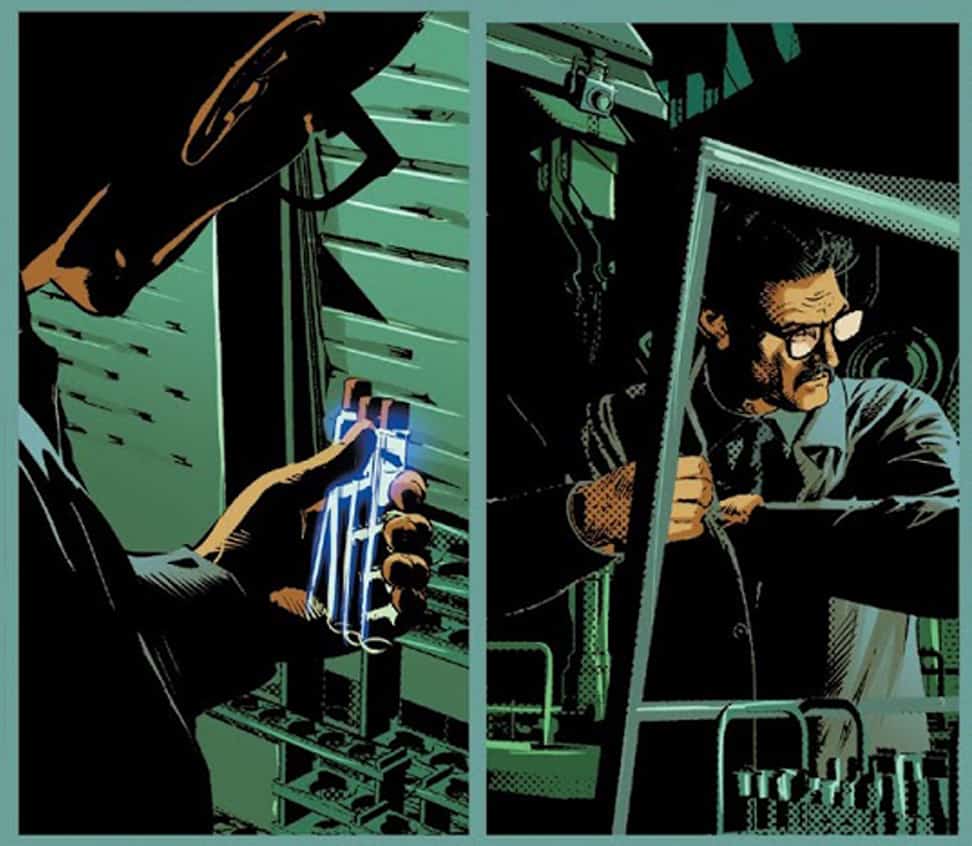 As heads to his car, he is approached by Shin Harada, the Silver Samurai, and two bodyguards. Shin asks Touko why he is stealing from him and shows him a video of the transgression. Shin threatens to go after Touko’s wife and daughter if he does not tell him who he is stealing for. Activating his Silver Samurai armor, he grabs Touko by the neck and dangles him over the parking structure they are on top of. Touko reveals that it was someone by the name of Kenji Aizone, of the Crazy Thunder Clan. He begs Shin for his life, but the Silver Samurai drops him anyway. 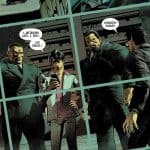 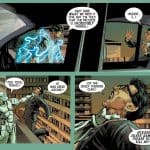 Logan heads to Ikebukuro, Tokyo, to follow up on the info he got. He confronts Kenji directly who has his Crazy Thunder Clan ninjas attack Logan. Since they have all taken the “Regenix” formula, Logan decides he really doesn’t need to hold back and a bloodbath ensues. 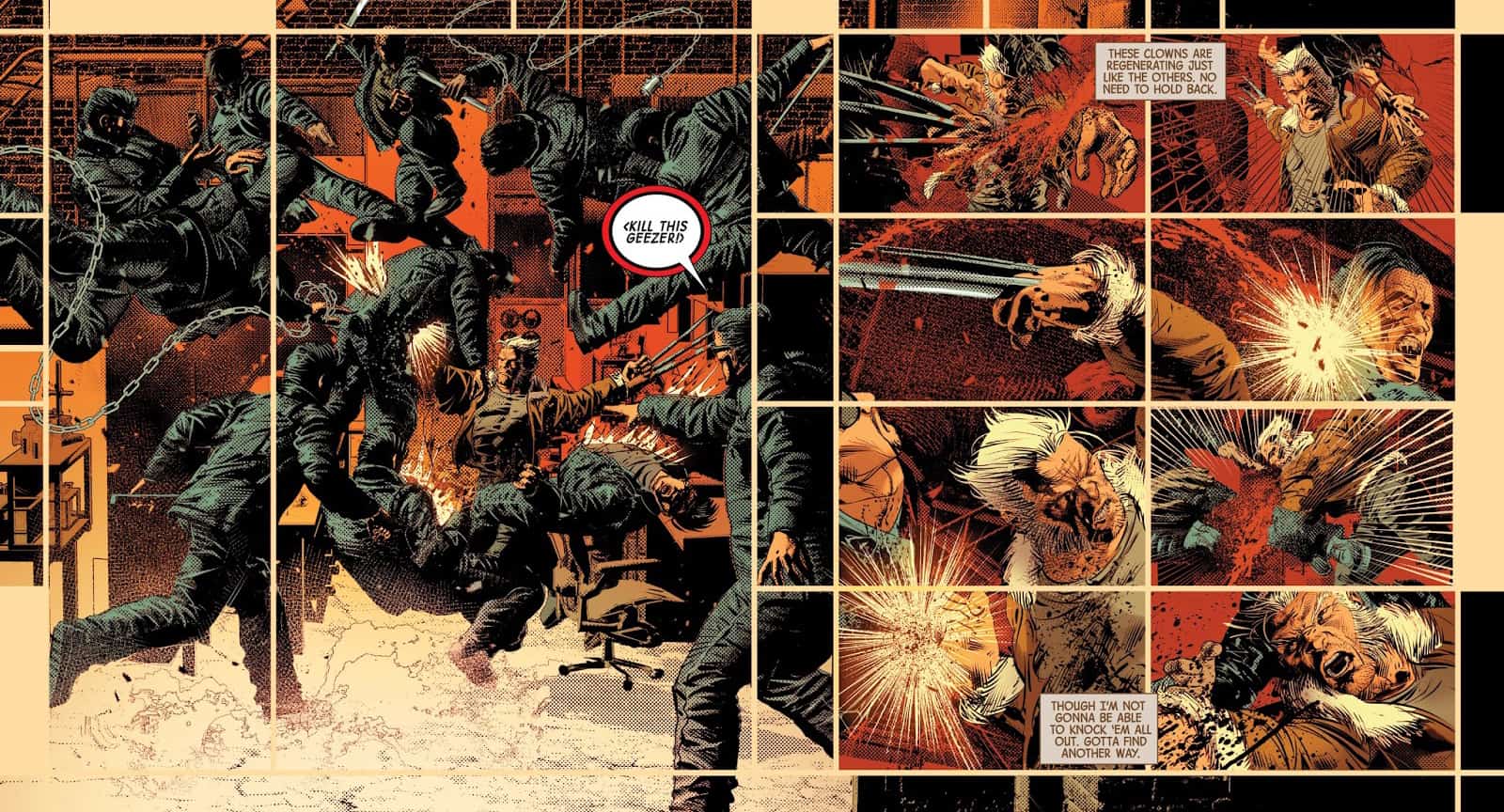 The fight moves into a large cooler, where Logan discovers the Regenix doesn’t work well in cold temperatures. After killing the ninjas, Logan forces Kenji to give up his info. Touko has been selling the Regenix to them to pay off debts. He doesn’t know what lab Touko worked at but he knows where he lives.
Meanwhile, at Yashida Corp., Shin is talking to someone on the phone about the Regenix leak, when he realizes the building is covered with red ninjas. 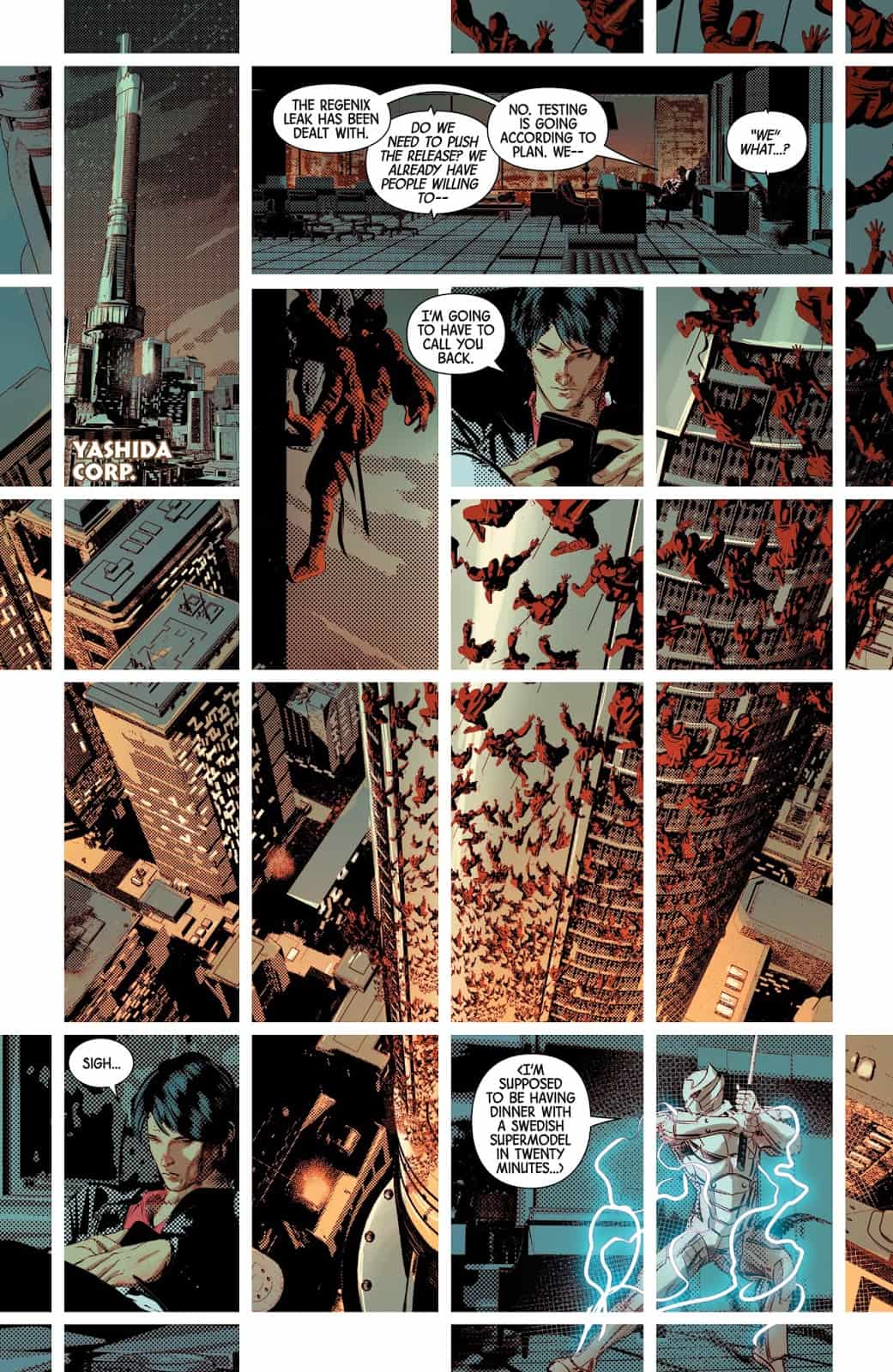 He switches to his Silver Samurai armor and quickly defeats the ninjas as they explode into his office. Suddenly, Gorgon, the mutant and member of the Hand, appears, informing Shin that they are taking over. Quickly disabling the remaining ninjas, the Silver Samurai mentions that he has taken precautions with Gorgon’s power to turn others to stone with eye-to-eye contact. 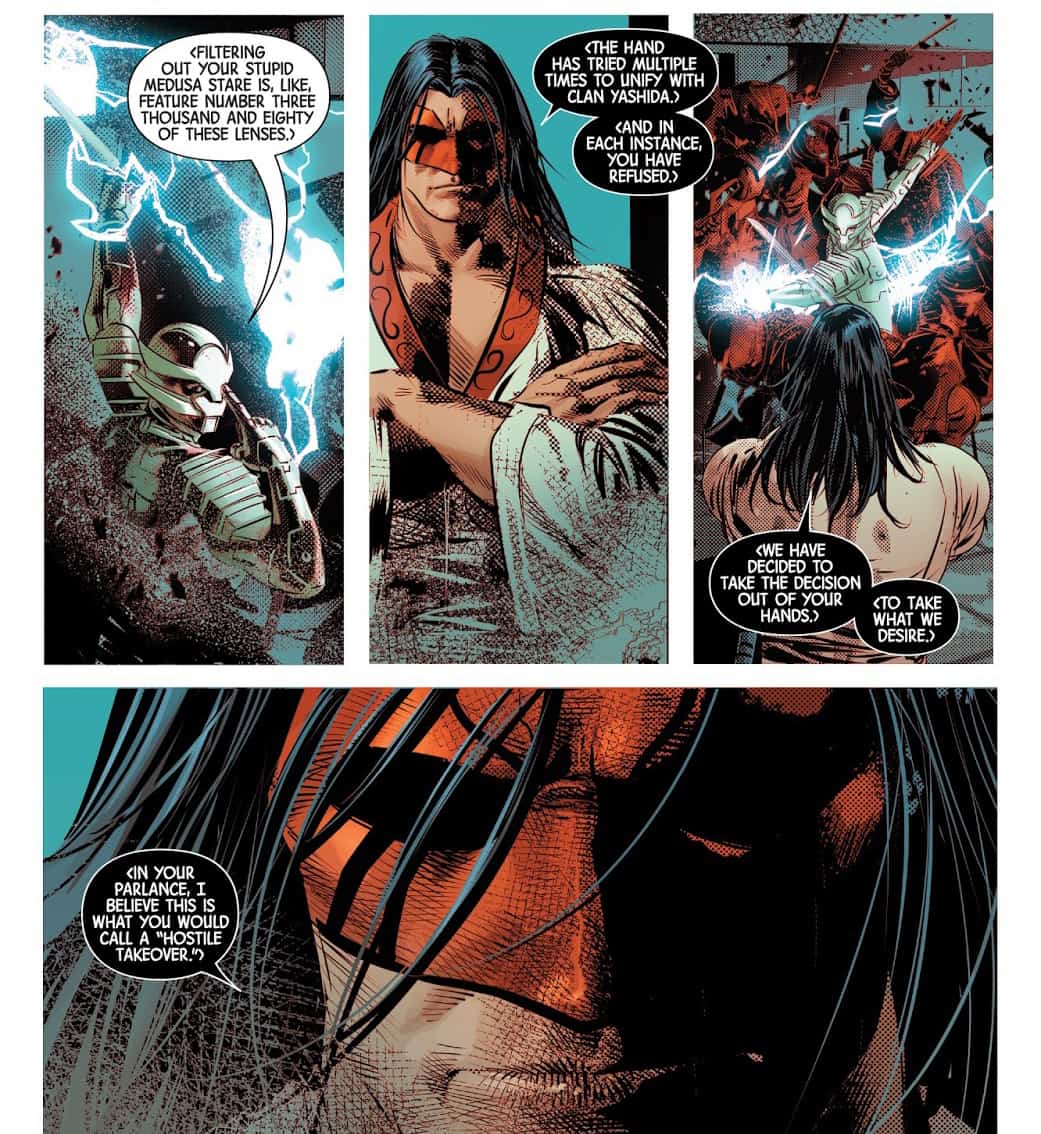 Informing Shin the ninjas were merely a distraction, a figure clad in red armor suddenly stabs Shin from behind, announcing that Clan Yashida is now in the capable hands of THE SCARLET SAMURAI!

What Just Happened?
Ed Brisson switches locations with ease, going from the wilds of the Yukon to another familiar Logan terrain: Japan. Stories featuring Logan in Japan are always fun for me. He has a long history with the Yashida Clan and this new story arc seems to be adding another chapter to his experiences there and with the Japanese criminal underground. We only get a glimpse of the Scarlet Samurai in the story, but we get a gorgeous cover by Mukesh Singh, showing that the Scarlet Samurai is a female, although we don’t know who yet. With the Prime Logan having returned in Secret Empire, I’m not sure what will become of Old Man Logan or this title, but I sure hope this creative team continues with SOMETHING involving “a” Logan!

Deodato shows no signs of slowing as the exquisite art and panel placement continue the high standard he has brought to this title. The detail is just incredible! 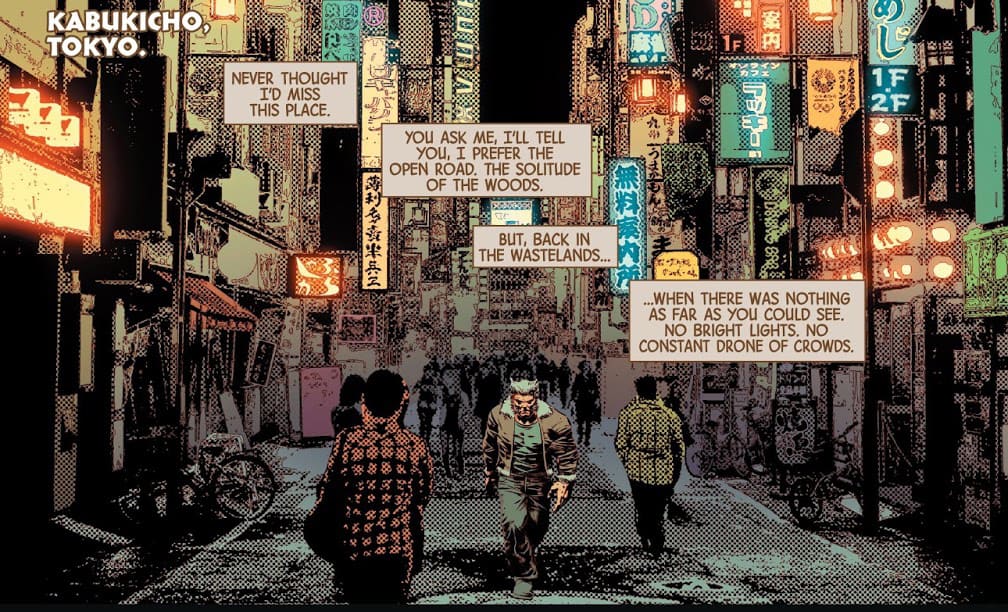 At the end of the issue, we also get a 3-page “Marvel Legacy introduction” to Old Man Logan, written by Robbie Thompson, art by Andrea Sorrentino, and with coloring by Lee Loughridge.

Rating 9/10
Final thought:
“Scarlet Samurai” begins a new story arc featuring Logan in Japan. This is a great jumping-on point for new readers! If you aren’t already picking up this fantastic book, I highly recommend it!