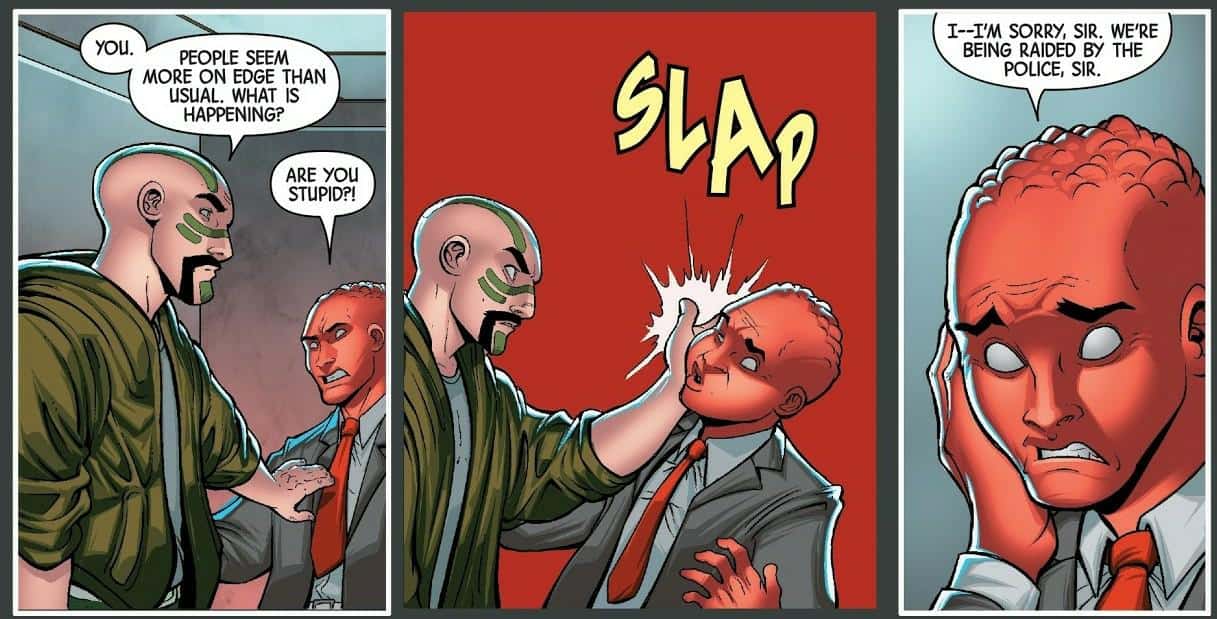 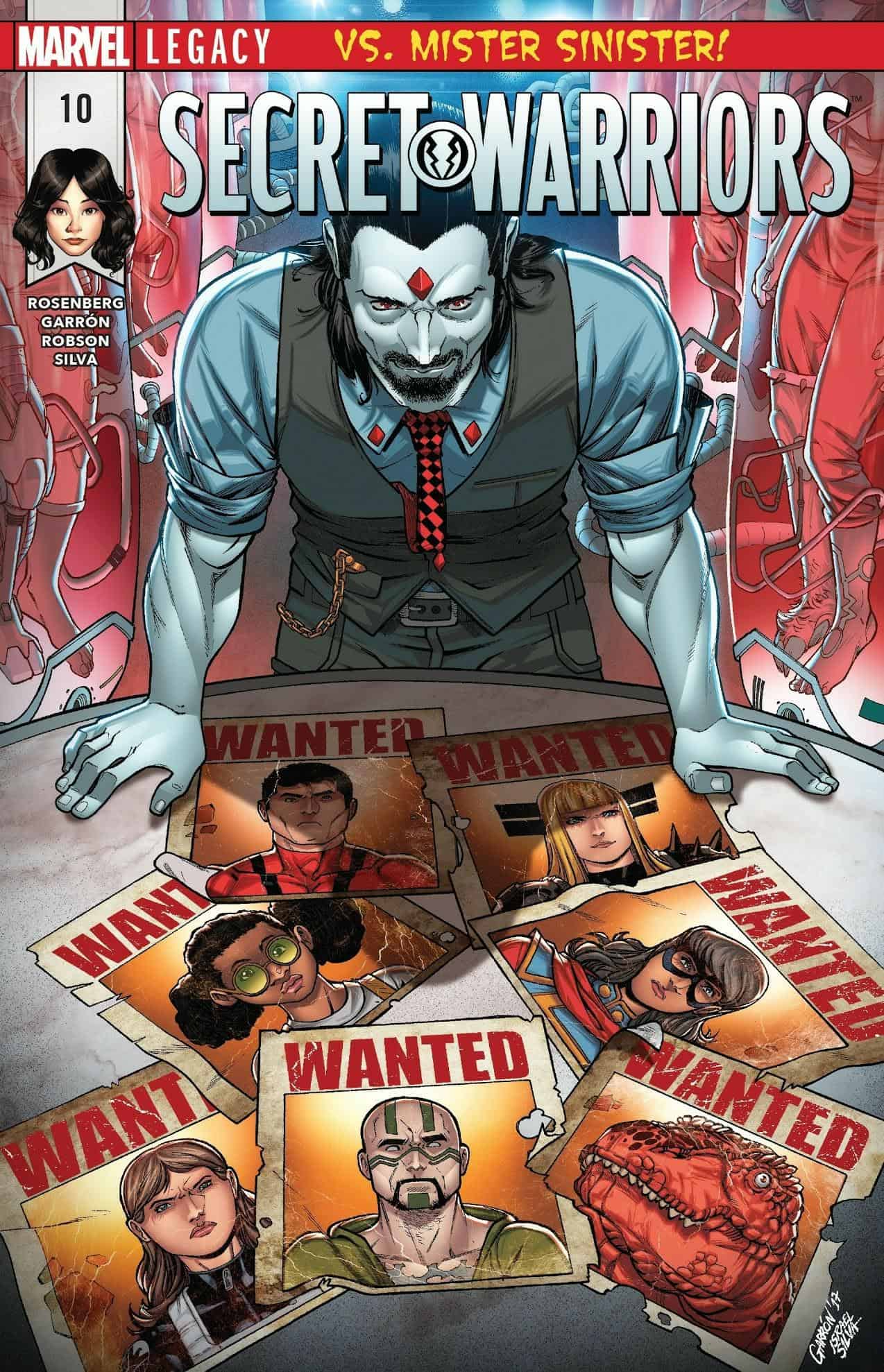 The Empire has fallen, heroes have risen, Warriors remain. Although Hydra has been defeated and the Inhumans lives have begun to normalize, The Warriors have a new mission, Mister Sinister has been kidnapping inhuman children to try and unlock their powers without the use of terrigen, Inferno’s niece numbers among the taken, and The Warriors are going to find her.

The Warriors consist of Quake, Moon Girl and Devil Dinosaur, Ms. Marvel, Inferno and sometimes Karnak, although his motives are often suspect and he currently isn’t on the team. The group is currently being aided by the mutant Magik, who allowed Dark Beast to escape and feels responsible.

Dark Beast has been stealing Inhuman children who have not yet been exposed to terrigen and is trying to trigger their powers without the catalyst at the bidding of Mister Sinister. Inferno’s niece was taken and while searching for her the team found dozens of kidnapped children and have been returning them home with the help of the mutant Magik.

Meanwhile, Karnak kicked off the team for supporting Dark Beast and Sinister from the start, even going so far as to give them his own son, has begun working at Ennilux, a secretly inhuman run company owned by Ahura Boltagon, Black Bolt’s son.

Last issue the team stormed Dark Beast’s lab, which was rocked by a series of explosions. Meanwhile, the team discovered Dark Beast or Sinister had booby-trapped the children themselves as one exploded in front of dozens of news crews.

We open on news crews reporting in front of Dark Beast’s lab, apparently, there is a connection between the equipment and Ennilux, the inhuman run company. A crudely drawn series of photos is flashed across the screen, the Warriors are wanted for questioning. They’re hiding out in the inhuman community of New Attilan. Some are not as well received as others. 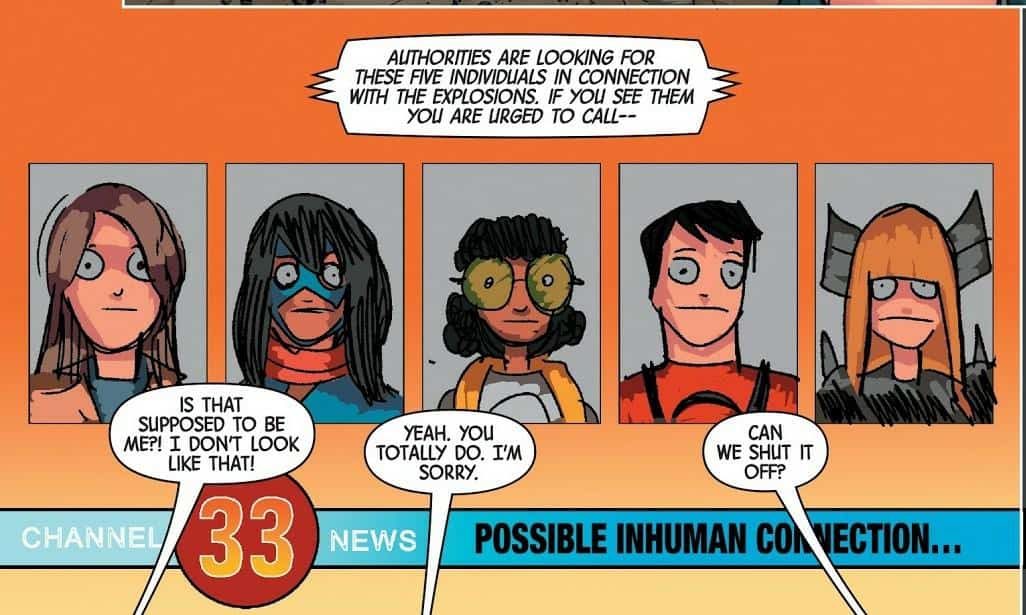 Inferno runs into Naja and Grid, whom he was split up with way back in issue 2. They’re mad at him for ditching them with Hydra. He tries to defend himself but they’re not convinced. Magik grabs him and they teleport to Ennilux. 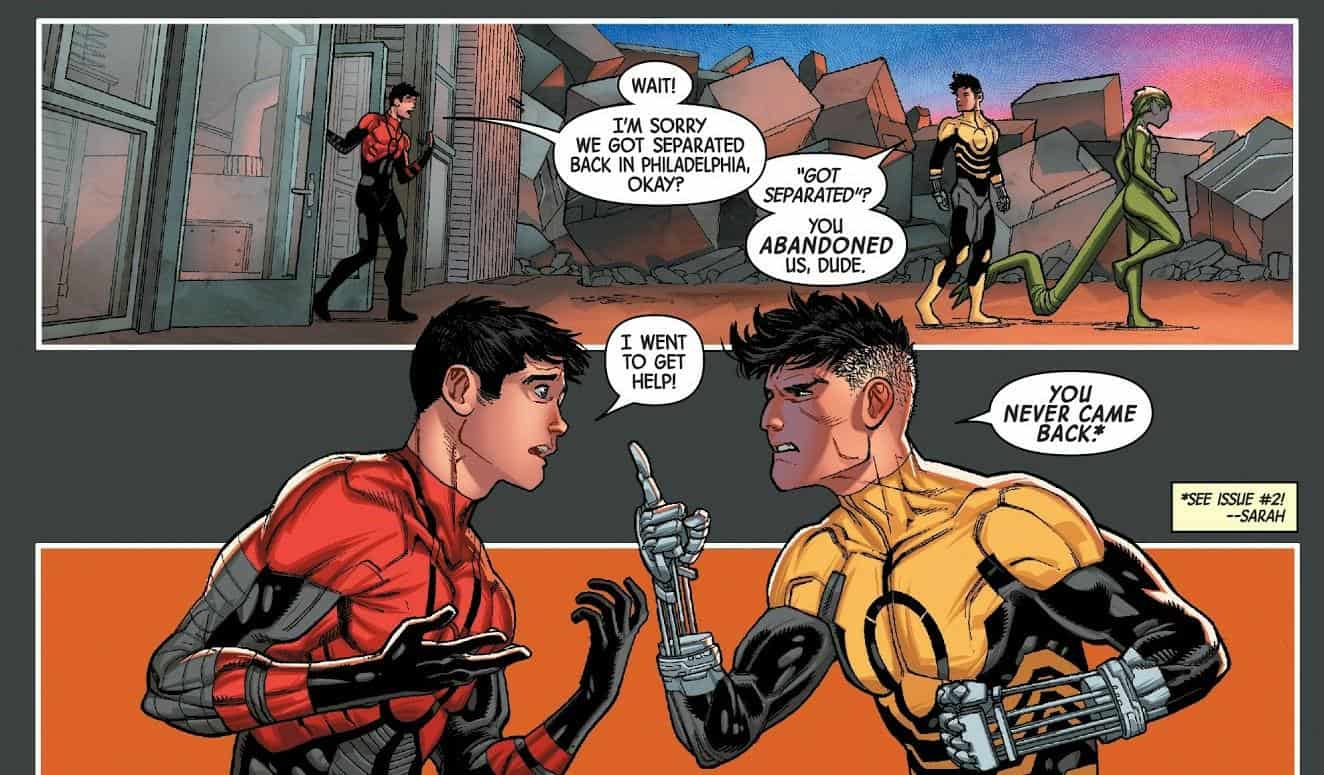 We cut to the Ennilux offices, everyone is running around in a panic, the police are outside. Karnak walks into the room and asks what’s going on, a man responds angrily and Karnak has possibly the most hilarious reaction I have ever seen.

Ahura runs in and asks how this could happen, how could Sinister have their prototypes? Karnak responds he gave them to Sinister. Ahura says he won’t get away with it, Karnak responds with predictable flippantness, he always has a plan.

Suddenly Magik and Inferno teleport into the Ennilux lobby, the guards draw their guns and everyone braces to fight, they want Karnak. Suddenly Ahura walks out, he won’t give them Karnak, he needs him more. As he runs the duo off he gives them a snippet of info. Look for Sinister in deserted Shield bases. 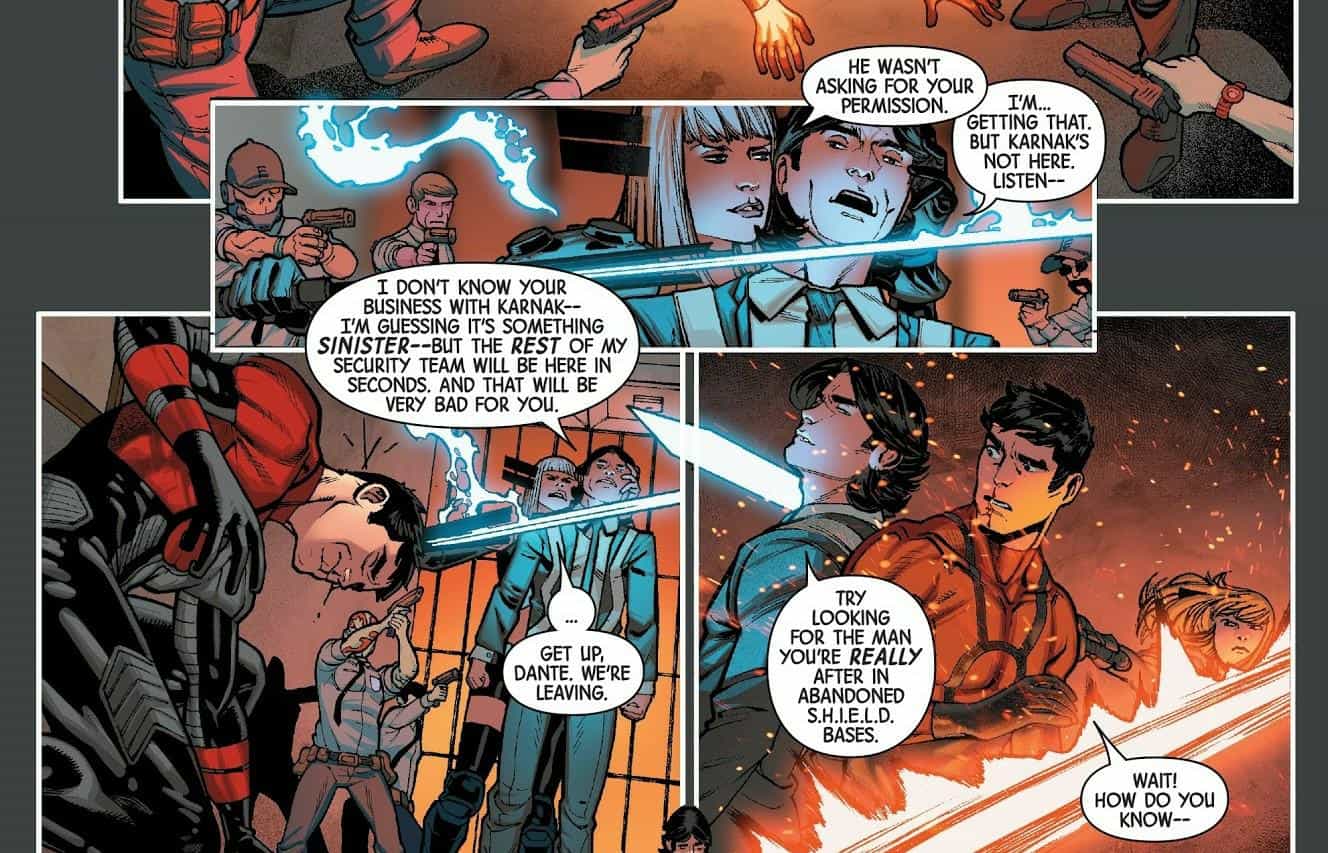 What will they find? Find out for yourself pick up Secret Warriors #10 issue today!

So far Secret Warriors has been a solid series, very funny at times and generally interesting. The Karnak moment made me laugh very much, although this issue had a bit of a high school drama feel to it I can say I was into. Overall not bad, I do wish we had gotten a bit more action, although Karnak’s final plan was a masterstroke. All in all a decently set up story assuming it pays off next issue.

The art this issue was a bit rough, it’s mostly Inferno’s facial expressions though. I can’t explain it but it is noticeable at times. Conversely, Inferno’s fire looks amazing! Maybe we call it a wash? I’m glad to see Devil Dinosaur back as we hadn’t seen him in a couple issues, and he is visually very well done. 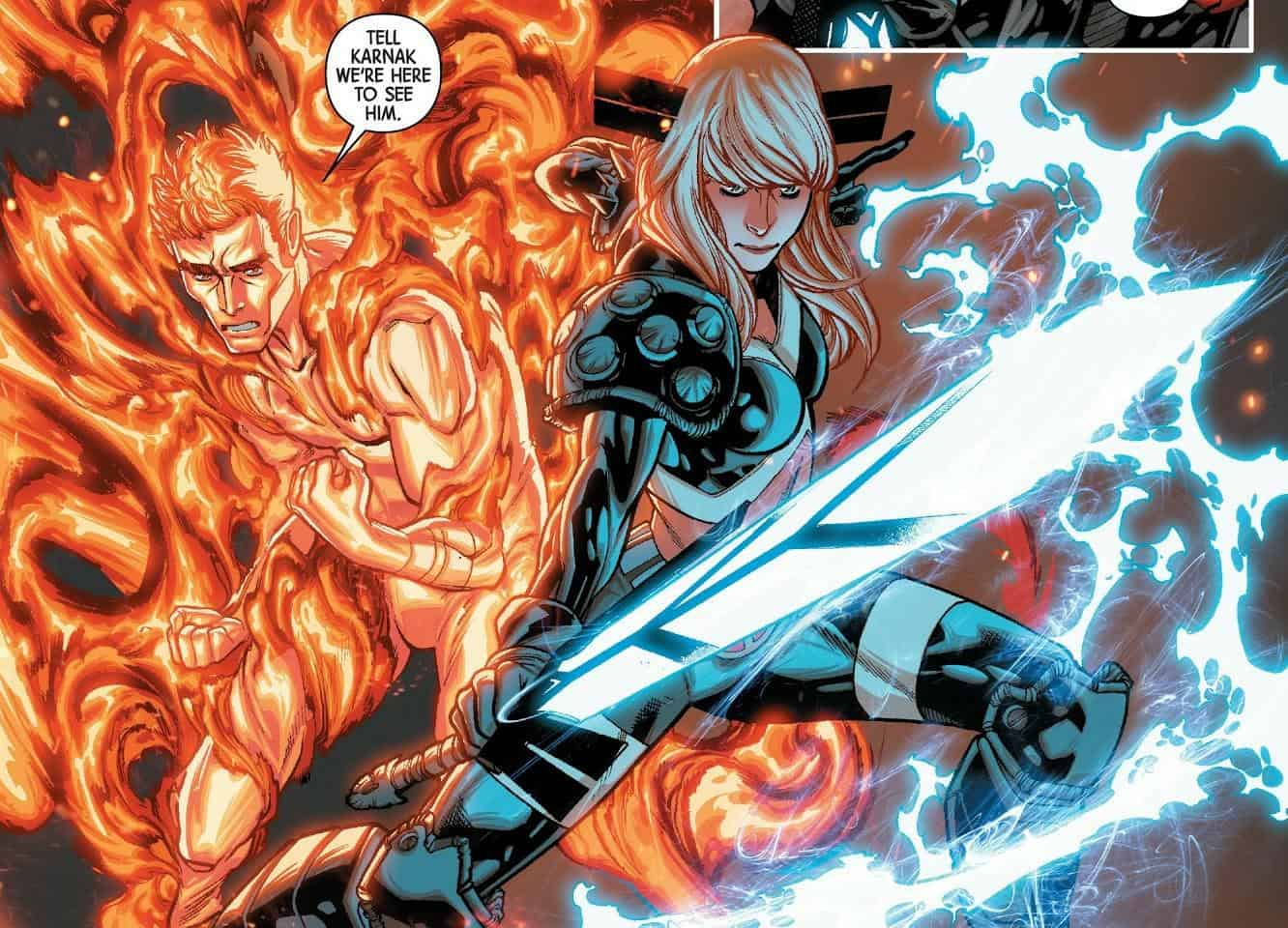 An interesting issue in the series, although not really a can’t miss arc if you aren’t particularly interested in the Inhumans in particular. I’m curious where all this is going and eagerly await the next issue for the conclusion.