SEVEN SONS #2: No One Said Being Jesi Was Easy 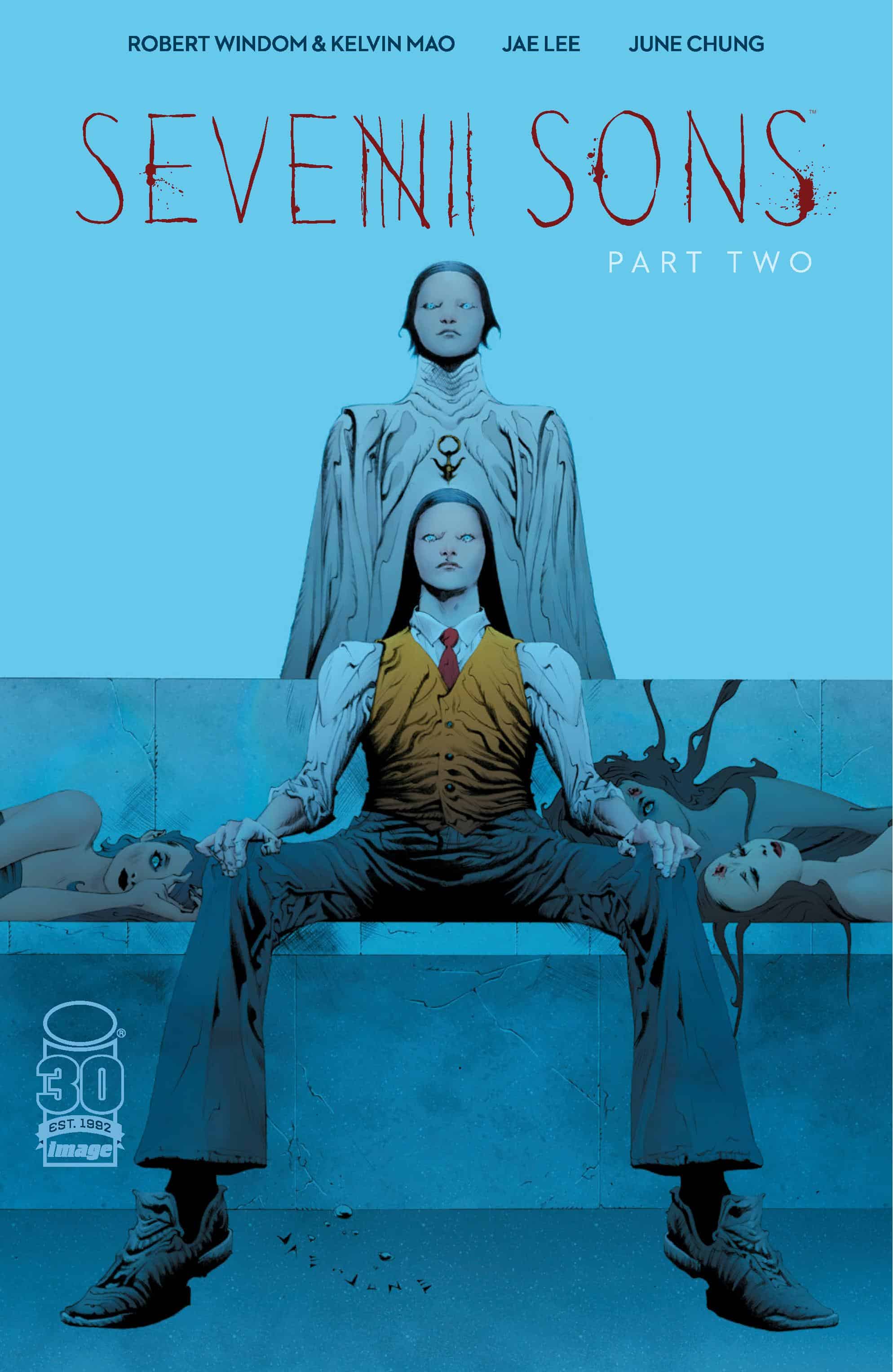 Ep introduces his sheltered brother Delph to the pleasures of the outside world while questioning their existence and the nature of the Church of the Seven. But Ep's about to learn that Jesi don't get to be like everyone else, not without tragic consequences.

After the explosive opening events of issue one, the creative team turn back the clock and split the issue into 3 parts. Several opening pages introduce us to and give us insight into the history of Nicolaus Balaak and the beginnings of the Church of the Seven Sons, neatly condensing Balaak’s time before the coming of the Jesi with the miracle births of the Jesi. The dialogue is short sharp and succinct, letting Jae Lee’s art do most of the talking and storytelling as we start in 1977 fleshing out the truncated history previously alluded to in issue one.

The second part of the issue jumps forward in time to 1998 (although still in the past) and there’s a distinctive shift here in style as the creative team uses the dialogue and interactions of it’s characters to drive the story forward. Jae Lee’s visuals still capture the spectacle of the massive religious juggernaut that is the Church of The Seven Sons but the focus is very much on Nicolaus and the 3 remaining Jesi, how they interact as the issue digs deeper into who they are as people and their relationships with each other. What this issue does remarkably well is how it humanizes the Jesi and comments on the hypocrisy’s of large  organized religion. This is embodied very strongly in the character of Ep who chaffs deeply under the burden of the religious mantle the Jesi have had put upon them. Lee’s art reflects the spectacle of the Church here but progressively narrows the focus  visually page by page as the interactions between characters become more and more intense. 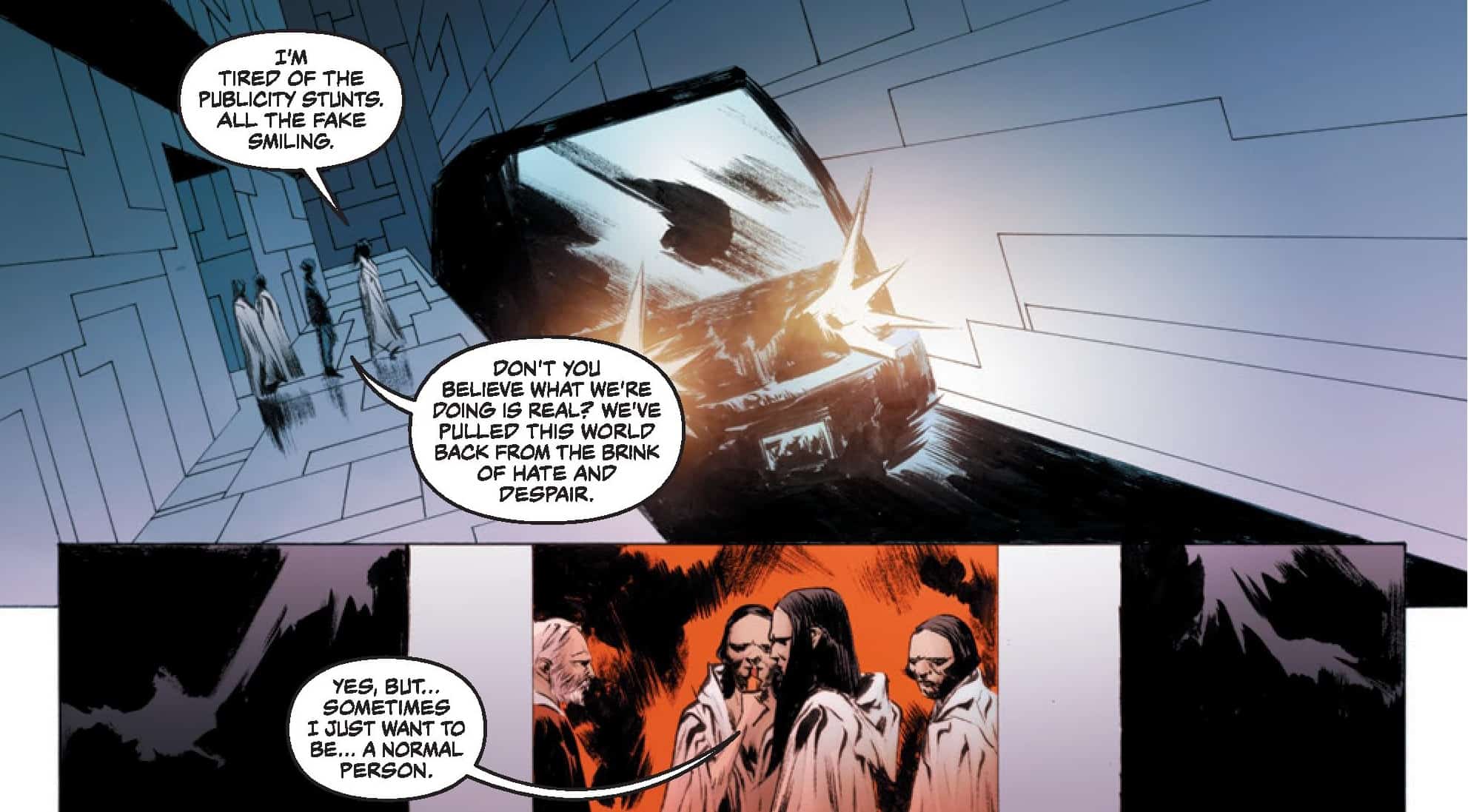 The last part of the issue is a fascinating balance between more interaction that examines the nature of Ep and Delph and highlights Delph’s naivete nature and Ep’s more world weary one and even arrogance with violence. Ep takes Delph to a club and exposes him to all sorts of very human pleasures and temptations as he reveals his plans to Delph. But Ep has gotten to comfortable in his quest to be anonymous and live a “normal” life and tragedy strikes as another Jesi dies but not before he reveals to his brother that there are secrets being kept from them by Nicolaus. Clever paneling from Lee captures the hedonistic nature of the club and the violence that ensues and we even get to see a miracle…

It’s an issue filled with exposition, determined to flesh it’s mythos out with plenty of symbolism and very human feeling characters thanks to an excellent script and excellent art.

Overall Issue #2 is a slower affair as it takes the time to flesh out the history of the Jesi and the Church of The Seven Sons in a installment where the art and script cleverly trade places in driving the story forward before coming together for a strong and violent ending to the issue.

SEVEN SONS #2: No One Said Being Jesi Was Easy