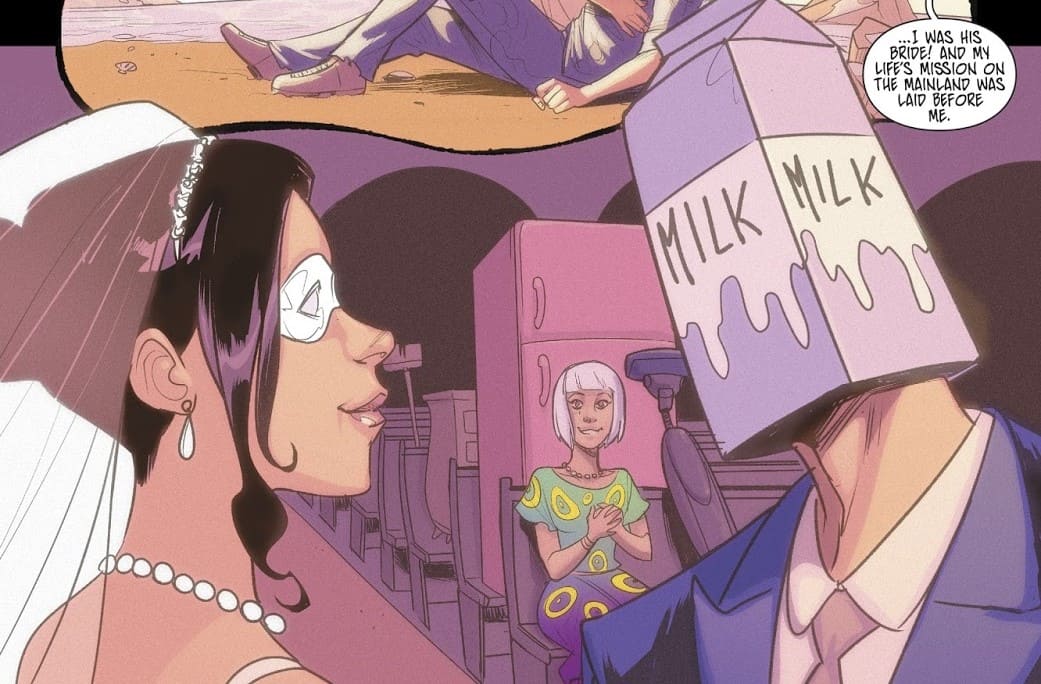 Psychoactive milk from Retconn is warping and changing the fiber of reality as we know it. The Doom Patrol and JLA are on their trail, but what of the rest of the DC universe? What has happened to Wonder Woman? 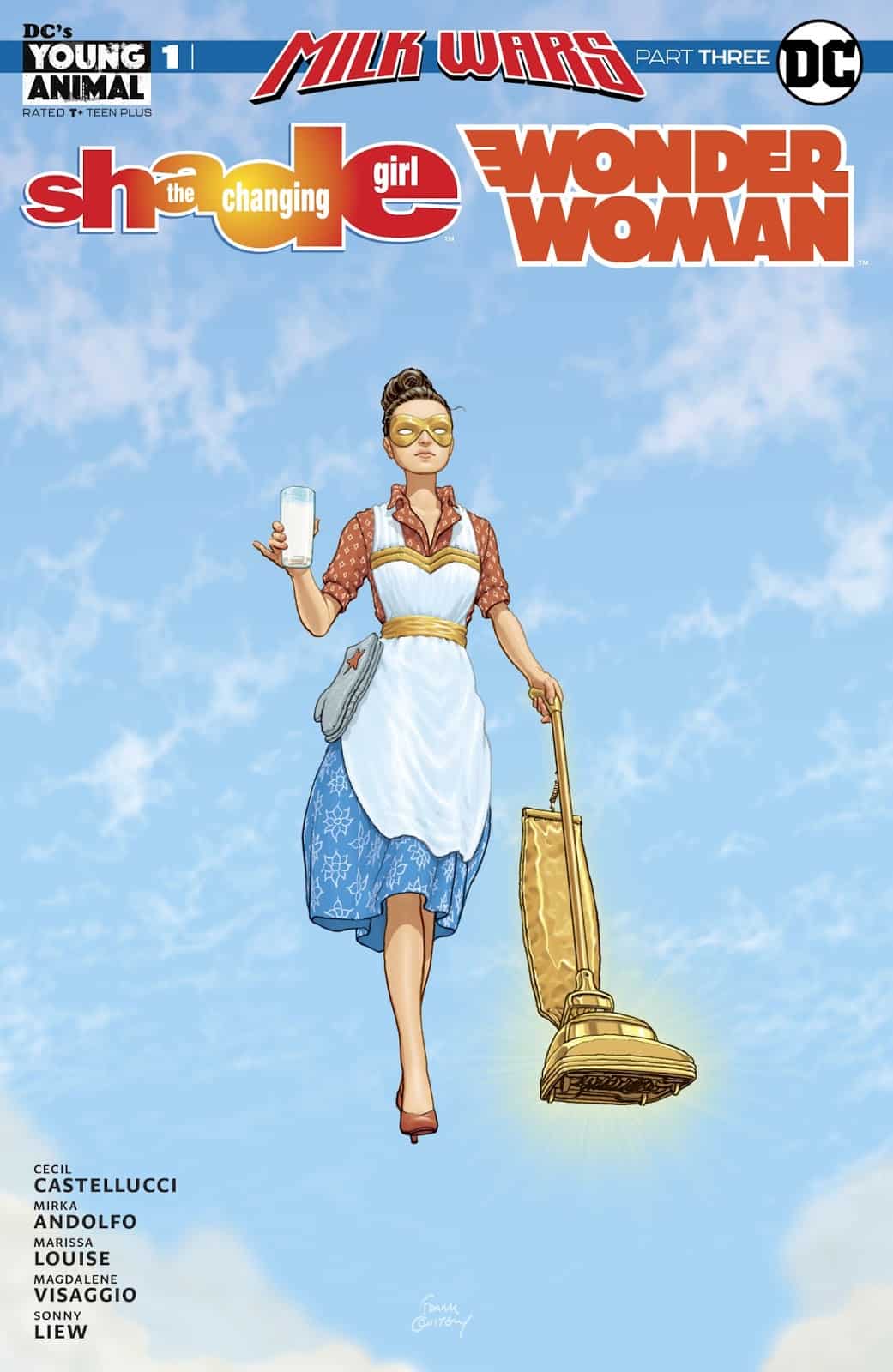 What You Need to Know:
After seeing the Doom Patrol fight Milkman Man, and seeing a odd milk obsessed Priest Batman, it’s clear that something is off in the DC Universe. Has the psychic milk spoiled Wonder Woman? Read on! 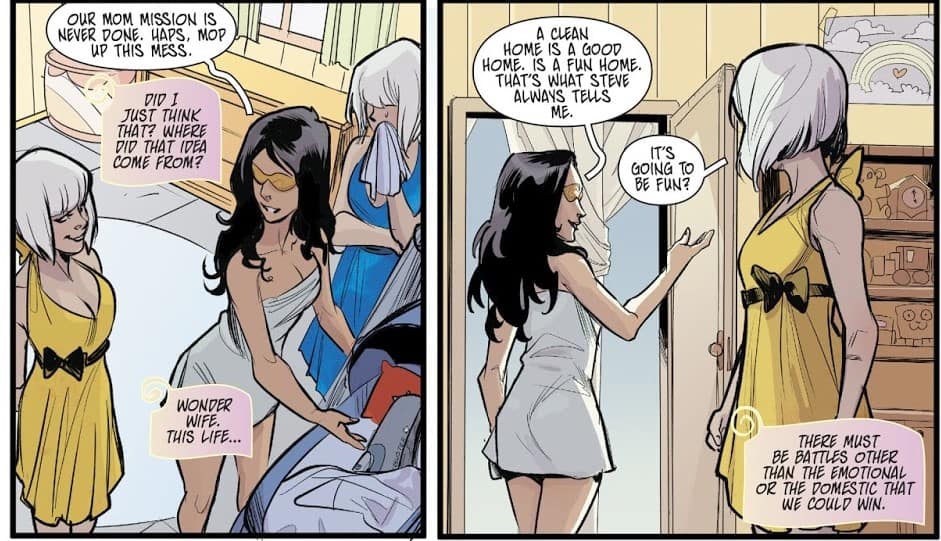 What You’ll Find Out:
With Retcon’s evil milk changing reality, we find a warped idyllic universe populated by odd versions of the heroes we know and love. Retconn seems to be targeting Superman, Batman and Wonder Woman. Shade the Changing Girl is being used to control Wonder Woman’s emotions, who refers to herself as Wonder Wife. Shade has been split into five distinct emotions, and Wonder Wife is using her basically as a mood control device. Anytime she begins to remember who she really is, Wonder Wife uses Shade to change her emotions or drinks more of the milk. Wonder Wife decides to take all of the Shades to a women’s rally, but Shade is uncertain of what is really going on. She keeps seeing Cave Carson’s eye skittering around the compound, and she can’t shake the feeling that something is wrong. After returning from the twisted women’s rally, Wonder Woman begins to fight the brainwashing again and sees Cave Carson’s eye. She sends the Shades to catch it, but they fail, and in anger Wonder Woman throws one of them against the wall, causing a crack in the wall and reality itself. Shade forces the crack open and finds Wonder Woman’s tiara and lasso. Outside of the pocket reality, Shade reassembles herself and breaks Wonder Woman out of her brainwashing. Together they get into Cave Carson’s eye and depart to go after Retconn.

What Just Happened?
First off, I enjoy the idea of the milk warping Wonder Woman into the polar opposite of herself. She is no longer a warrior. She is a completely subservient housewife who lives only to please others. I just don’t know if it gets all the way there conceptually in the issue. It does feel like it could have been two issues or maybe more streamlined into the one it got. Either way, I feel like the issue gets 90 percent of the way to the goal but doesn’t quite make it.

I read all of the Young Animal titles except for Shade the Changing Girl. I tried it but could not get into it. That being said, I felt like she was used as less of a character and more of a plot device to keep Wonder Woman in check. It’s possible that I feel that way because I’m much more invested in Wonder Woman than Shade. I’m very curious to see how it all comes together in the upcoming finale.

Finally, the art in this book is very interesting. Andolfo blends Themysciran architecture beautifully with retro 50’s sensibilities and really sells the gilded cage that Wonder Woman finds herself in. I don’t think I’ve seen Andolfo’s art before, and I’ll certainly keep my eye out in the future. 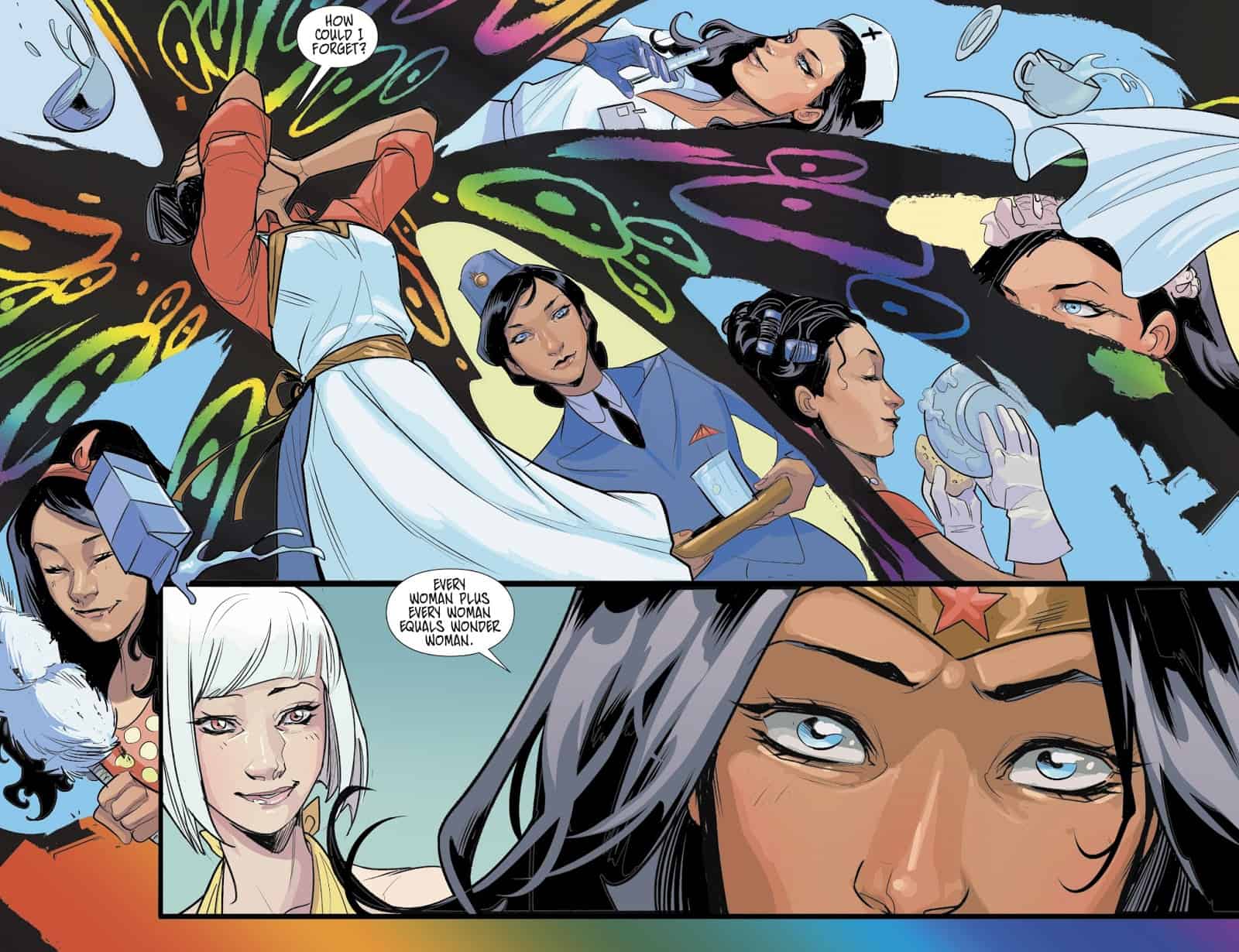 Final Thoughts:
While perhaps not as strong or weird as the preceding two issues, this is still a fun and interesting issue. I liked the concepts in the issue, but it was missing something. Definitely worth a read through.