SHADOW SERVICE VOL. #1: Into The Shadows 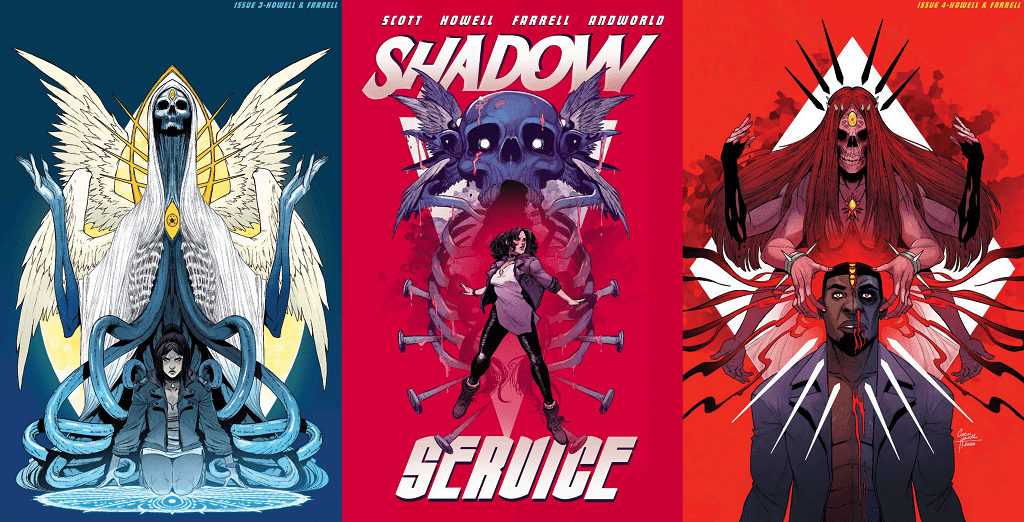 Welcome to England. Not the England of Big Ben and tea with the Queen...no welcome to the London of demonic monsters, secret agents that eat people and can then become those people and things that do more than just go "bump" in the night. This is the world investigator Gina Meyer finds herself falling deeper and deeper into when a missing person's job takes a left turn straight into a supernatural can of worms so to speak...but Gina has secrets of her own...you see Gina can do magic, has a talking rat as a buddy and a past filled with trauma from growing up with abilities that no one else has and as she soon discovers Gina is not alone.

Cavan Scott spins an intriguing supernatural underworld thriller around his main character as her investigation has her cross paths with the mysterious MI26 and its members or, as it’s known amongst some, of it’s own Mi-666. There’s a constant tension in the book, a dark undercurrent of things unseen and secrets not yet known that leaves the main character as well as the reader with questions as to who are strange ancient child Hex and his MI26 agents as well as to who their targets are as Gina learns more and more secrets of this hidden world. Who can she trust? Can she really trust anyone?

Even while we learn about Gina’s troubled childhood and follow her as she is recruited into helping MI26 (very much against her better judgment or will, the truth be told), the lines of who the villains are in the series are never clear and become muddier and muddier throughout the book. Along the way, there are monsters, demons, possessions, cantrips, spells, and magic galore! I’m very much reminded of horror novels like Creed by James Herbert that I read when I was younger (minus the demonic sex of course although who knows it’s only been one arc). In terms of atmosphere, I think Scott has been able to create a genuine noir moodiness to this story which helps immerse you in this strange and dangerous underworld with characters that have unique occult abilities and agendas that are not cut and dry which adds to the constant tension in the book. This isn’t the happy magic world of white magic this is a dark world of occult spells and horrifying monsters which is frightening and compelling in the best way.

The art team of artist Corin Howell, colorist Triona Farrell, and lettering studio Andworld Design bring this story of the dark hidden underworld of magic in London and occult secret maneuvering to life with wild horrific monsters, with clean lines and ominous designs as well as a clever color palette that is at once colorful but also muted and broodily reflective of the occult world that the characters live in. Howell draws awesome monsters and the ones we get to meet and the magic we get to see in this series is both fascinating and horrifying and the way it is drawn and colored suits the feel of the book perfectly. Farrel’s use of purple and green is particularly excellent quality with purple being almost the main character’s “theme” as it was even reflected in Andworld’s dialogue thought boxes for Gina. The art through the entire volume is always of a particularly high standard. Howell does a great job of showing emotion through faces and is consistent with the look and feel of the characters throughout the book while also making the supernatural monsters are compellingly horrible when they come to life on the page.

Shadow Service Vol 1 is a superbly good first volume of supernatural noir that takes the idea of the misanthropic investigator who happens to do magic and builds a world of mysterious occult agencies, monstrous creatures, and dark secret agendas for the main character and readers to navigate with strong writing and excellent art. It's Magic Noir that isn't afraid to go bump in the night and balances the mystery and horror elements really well for a compelling read.

SHADOW SERVICE VOL. #1: Into The Shadows