Shadow War Omega #1: Killer’s Calling From Inside the Continuity 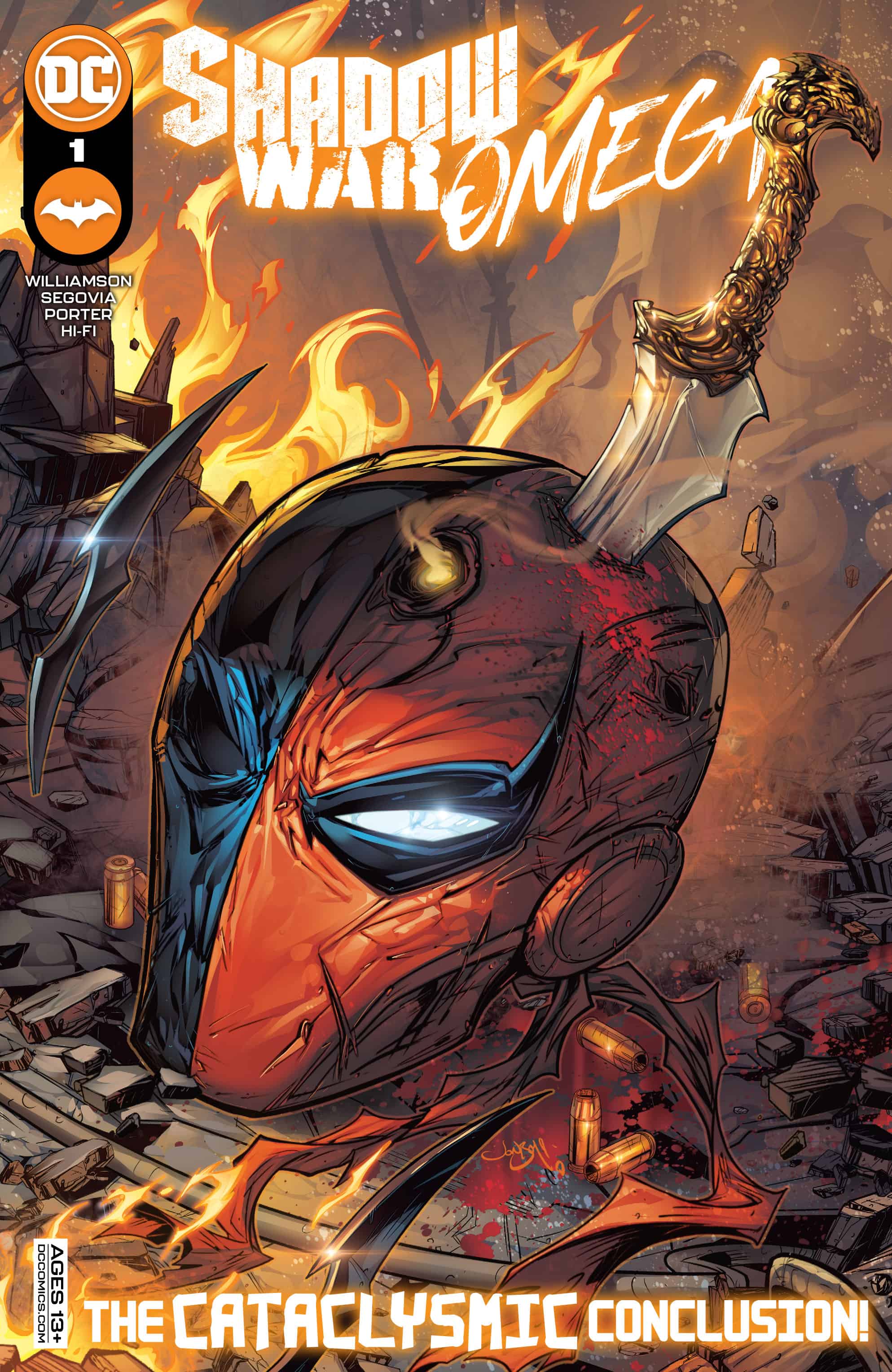 THE SHADOW WAR'S EPIC CONCLUSION! The shocking finale of the Shadow War! Lives have been lost. Heroes and villains have fallen in battle. And now the real mastermind behind the Shadow War has been revealed. But they are far from done! Batman and Robin are all that's left to put a stop to their real plans. Can the father-and-son duo work together to save the day? Events in this issue lead directly into DC's next big summer event!

Crossover events can be a powerful boon to ongoing titles in an interconnected universe. One of the thrills of reading mainstream comics (which has arguably been adapted to the screen in the form of the MCU) is getting to experience characters and plots intersecting, and push and pull microcosms of the narrative world. An issue, however, with the crossover in comics, is when pairings are mismatched or too similar. This creates a sort of narrative dissonance where the larger story being told does not match the specific aspects of the individual issues comprising the event. This dissonance can occur with aspects of a book, from its writing and characterization to its art and coloring. Once that dissonance springs up it’s extremely difficult for the crossover to realign and return to a more consistent experience.

Shadow War Omega, written by Joshua Williamson with art from Stephen Segovia, Mike Henderson, and Howard Porter, colors from Hi-Fi, and lettering by Troy Peter, takes no time in providing context to the reveal from the last installment of the event, detailing why Geo-Force has been masquerading as Deathstroke and instigating the Shadow War. It’s a surprise move to deal with the fallout of Brian Michael Bendis’s time on the Event Leviathan and Checkmate books, which have felt largely forgotten in this era of DC’s publishing line. It’s commendable on Williamson’s part to try and tie these various, diverging ideas of continuity over the last few years into a shared timeline, but the largest issue with this issue’s script, and the event as a whole, is there is a lacking through line.

Williamson tries to employ a parallel structure with Robin and Deathstroke as the two major forces in the event, bolstered by Batman, Rose Wilson, and Talia Al Ghul. That parallel structure almost works but feels lacking on the Deathstroke side by the conclusion of the story. If the story centered on a singular character (which feels like it should have been Damian) it would have sharpened the focus of the event. Instead, the final product is a stepping stone for Damian’s character and another new status quo for Deathstroke, the current one having only been set-up in a handful of issues before and during this crossover. Ideally, the desire to let Damian grow will persist past this series, and with the recent announcement of another Robin-centric event from Mark Waid and Mahmud Asrar, that chance does not seem too far off.

The issue showcases the strongest, and most consistent, art for the crossover, which belongs to Segovia. His art has a modern and stylistic approach, combining straightforward and clear panel work with excellent and kinetic linework. Segovia’s art does a great job of bringing together the various pieces of this crossover and gives the book a stylish flair for its final issue. Hi-Fi’s colors work in perfect sync with the art to give the issue a bombastic palette and ratchet up Geo-Force’s meta-abilities. With that amazing pairing in the main portion of the issue, it’s a jarring change going from Segovia’s art to Henderson’s for a denouement, before switching again to Porter’s for the epilogue and additional set-up.

That change is another example of the widening gap between the books that are featured in this crossover (Batman, Deathstroke Inc., and Robin) and highlights just how important a shared artistic aesthetic or style is to a crossover event. On their own, all three artists are great and have proven consistently amazing series, but when put together, the art clashes, and not even the coloring can tie them together. Either letting a singular artist or more realistically because of scheduling, pairing artists with an aligned aesthetic or style would have helped to create a more cohesive story. Instead, Shadow War reads like a battle of the bands with multiple bands on stage at the same time, playing distinct genres of music.

Ultimately Shadow War Omega is a scattershot ending to a scattershot of an event, not committing to a story about any of the titular characters, or dealing with the previous series in earnest. What’s clear is this book’s status as a set-up for Williamson’s upcoming Dark Crisis. The crossover as a whole feels like a pit stop to pad time before the universe-altering event and is more interesting in theory, rather than execution. Shadow War Omega is an excellent book to look at, but the story is lacking, and if nothing else, hopefully Segovia will get to tackle a limited series or Black Label book next.

Shadow War Omega #1: Killer’s Calling From Inside the Continuity