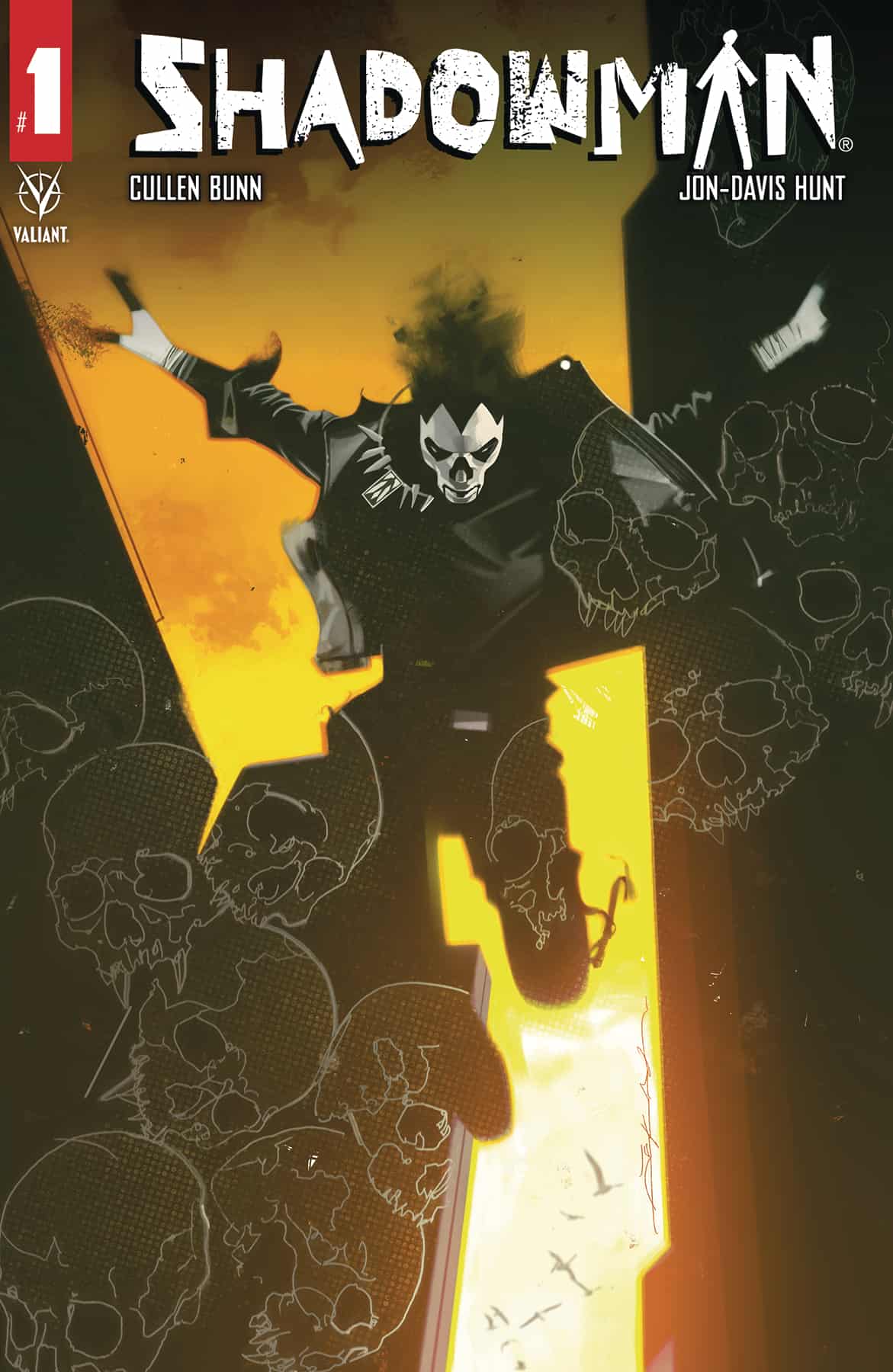 New York Times bestselling writer CULLEN BUNN (Venom) and acclaimed artist JON DAVIS-HUNT (Clean Room) pull you into a world of horror and supernatural suspense as Jack Boniface, aka SHADOWMAN, protects humanity from the nightmares that lurk within the dimension known as the Deadside… but the barrier between Earth and the horrifying realm is tearing and gateways are popping up all around the globe. The forces of darkness are hungry for life, and only Shadowman stands in their way.

The return of Valiant’s flagship character Jack Boniface a.k.a. Shadowman is utterly horrific, uniquely heroic and relentlessly engaging as we find ourselves back in New Orleans to kick off a brand-new story packed with potential for greatness. Cullenn Bunn is often introduced as the Master of Horror and he proves worthy of the title in Shadowman #1, delivering not just a scary premise but a truly terrifying comic, filled with grotesque and bloody influences to shape this new danger surrounding the Deadside and Earth. 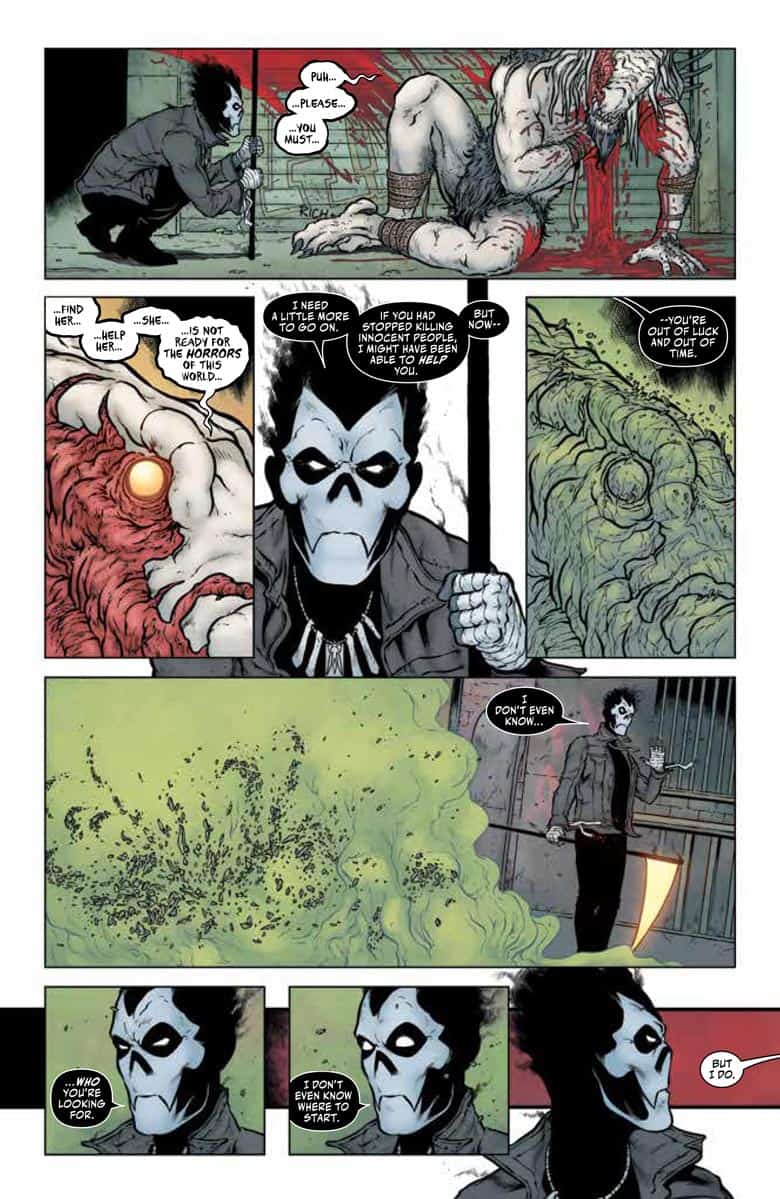 As we learned from the official description from Valiant, the veil or barrier between Earth and the Deadside is fading and causing the demons and worse to pour through. This sets the stage for Jack’s heroic endeavor steeped in terror that gives  the story a meaningful direction for both the main character and the the greater Valiant universe as well. There is a sense of weight to what is happening, derived not just from bloodshed but also what worse beings could be lurking just beyond the ever-thinning veil into the Deadside.

The horror direction for Shadowman is a bit of a no brainer. Luckily, Senior Editor at Valiant Heather Antos understands this approach and assembled a spectacular team to pull it off. Jon Davis-Hunt is doing some of his best work yet here, defining this vision of Jack Boniface and Shadowman with designs that help him to stand apart from what we’ve seen before with a sense of originality, but never forgetting the familiarity that made us fall in love. It’s the execution of horror that really helps the first issue of Shadowman to land though. Davis-Hunt and Bellaire don’t hold anything back in the sometimes shocking panels that punctuate Bunn’s story of terror with unforgettable visuals. The heavy shades of black and vibrant, sometimes saturated reds are offset with a perfectly timed pops of eerie greens which establish a tone that carries through the entire issue.

There are some special treats for longtime fans but nothing that isn’t accessible for new readers as well, once again showing just how well Valiant can build a connected universe in great detail without leaving new fans behind. This is a perfect book for someone who has both never read a Shadowman comic and even a Valiant comic. And while the execution of both the writing and the artwork are strong, the synchronization of aesthetic that Cowles’ letters bring into the story is remarkable. It’s an example of just how important the letters are to the reading experience and sets every page off with an engaging feel.

It’s easy to praise a book like Shadowman #1 because of just how much every member of the creative team brings to the table to make the book feel like a cohesive project from start to finish. The passion they have for this character can be felt on the pages and as a fan, it’s awesome to see everyone holding nothing back to make this vision of Shadowman work. Despite always being tied to the Deadside and the darker side of the Valiant universe, Shadowman has never leaned so heavily into the horror genre in this way. The ghoulish undertones we’ve come to know are magnified with just the right amount of action mixed into the dark mystery at hand.

As a first issue, Shadowman #1 accomplishes everything you hope for and if you are a fan of the horror genre, maybe even a little more. This issue is  however mostly a setup to give the series a foundation and help elaborate on the premise. Some might hope for more of a narrative punch, or a more tangible connection to something from previous series, and those are valid points but if we’ve learned anything from Valiant it’s that they know how to deliver a rewarding payoff.

If the first issue of Shadowman is this good, I couldn’t be more hyped for what the entire creative team has planned in upcoming issues.

Shadowman #1 is utterly horrific, uniquely heroic and relentlessly engaging. The ghoulish undertones we've come to love from the character are magnified more than ever before to deliver an experience that you simply can't forget.

Star Wars War of the Bounty Hunters Alpha: If You Ask Me, I Blame the Parents
May 5, 2021