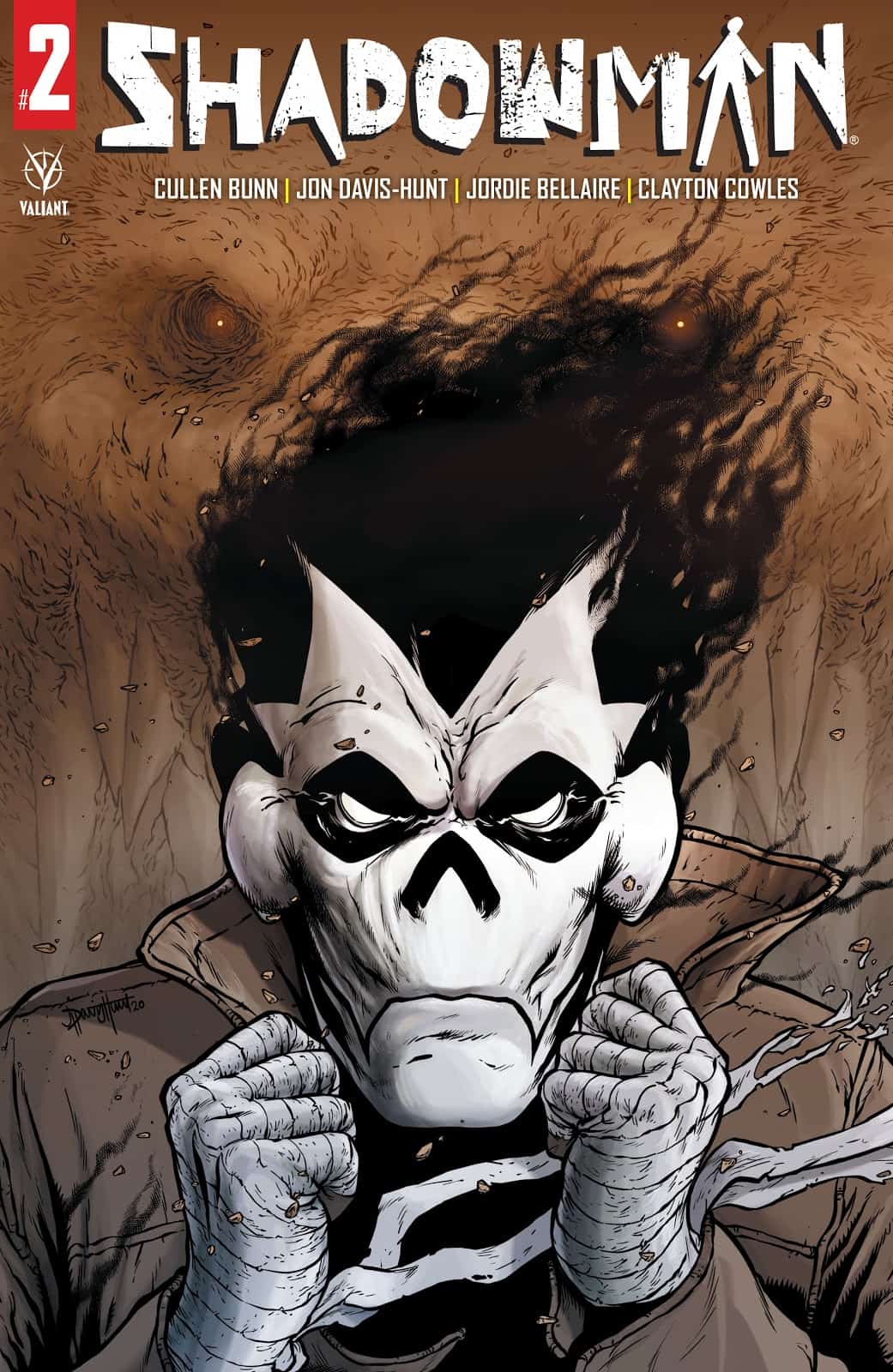 The bone-chilling team of  Cullen Bunn and Jon Davis-Hunt bring forth a terrifying tale in this can't miss new chapter of Valiant's hit horror series.

The hellscape known as the Deadside has pried open a doorway to Earth in Enoch, Arizona! And our only chance at survival against the awoken desert beasts is SHADOWMAN.

Shadowman #2 has arrived! The Deadside wears thin and only Jack Boniface can put the horrors that spill through into our Earth back where they belong, but this isn’t a random occurrence.

There are other forces at play here…

Valiant has taken the horror genre by the reigns in this second issue of the flagship Shadowman series. The character has always been one uniquely suited for ghoulish mysteries in the darker corners of the Valiant Universe but never before have we seen such an overwhelmingly horrific tale. We were able to keep our review spoiler free for the release of the first issue, but for our thoughts on Shadowman #2 beware, there are spoilers ahead!

This series has wasted no time in getting right to the heart of what is keeping Jack Boniface on edge. He is familiar with the demons and other shadows lurking in the Deadside, even how they make their way into our realm occasionally, but in the second issue we already begin to put the pieces together that there is someone pulling the strings that we cannot see just yet. Before we get into the truly horrifying elements of this comic, it’s important to ask the question – who is behind the thinning veil of the Deadside? How does the recurring ghostly woman fit into this? And what could they be trying to accomplish by unleashing such terrors into our world?

We may not have those answers right now, but I think Baron Samedi, the Loa of the Dead, isn’t giving up everything he knows just yet…

This mystery is the catalyst for what grabs your attention and keeps you coming back, but as we discussed in our review of the first issue, it’s the horrors that will shock you. Cullen Bunn is undoubtedly one of the premiere writers in the genre right now and he shows just why Valiant introduced him as the Master of Horror with Shadowman #2. While the issue takes the important time to give more context surrounding the mystery at hand with a trip to Enoch, AZ, it also delves deep into the horrors Shadowman must confront by introducing a new grotesque monster straight from your nightmares. These aren’t jump scares or fun spooky depictions, this is pure horror perfectly aligned with the superheroics only Shadowman can deliver.

Artist Jon Davis-Hunt brings the issue to life in a way that captures just how successfully comics can tell a story rooted in the horror genre. His illustrations of Baron Samedi are haunting, Shadowman carries a presence in every panel that is undeniable and the mutated monster that Jack fights isn’t likely to be forgotten. But there is a nuance involved within these pages that elevate the issue from typical scary comic to a can’t-miss horror thrill. The synergy between the creative team, from Bellaire’s dark yet striking color palette setting the tone of the story to Cowles masterful lettering carrying us through each panel, has helped to give readers a book that holds up even under close scrutiny. The impacts of a simple act like turning the page to reveal gross horrors or a new layer in the dark mystery create an atmosphere of tension and even instill some anxiety in what the next page might contain, reminiscent of horror manga legend Junji Ito’s work even. This is a level of horror storytelling that you just can’t find in any other medium and the entire creative team involved has utilized Shadowman to push the boundaries on what was thought possible for the character. 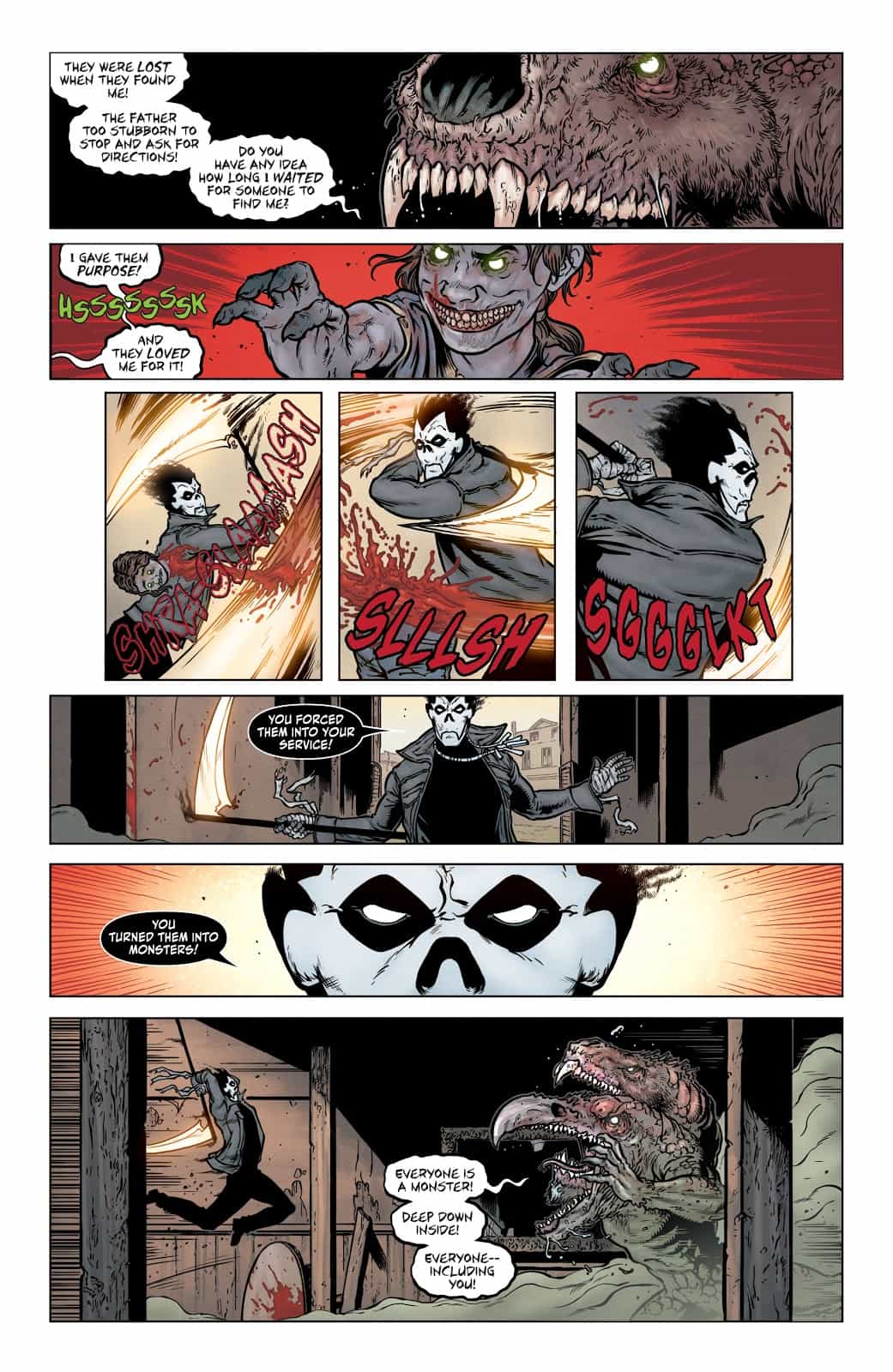 The pacing in a story like this couldn’t be more important. Dark mysteries often reveal too little and cause readers to lose interest quick, but not this Shadowman series. The second issue touches on fundamental plot elements that typically wouldn’t arise until the third issue or even much later in other series, but this creative team has found a way to shine a light on the path forward quickly while still delivering on action-packed scares without overburdening the limited space of a single issue. The result is a comic that keeps you engaged, wondering what is happening while enjoying everything being thrown at you even when it turns most violent.

For someone who is looking to jump into this character and even the greater Valiant Universe for the first time, this is exactly what you want. It’s accessible and clearly defines who Shadowman is and what he is all about. However, Bunn has also given plenty of hints that longtime fans will have their cravings satiated as well as we learn more about what is happening to cause these “blights” in the Deadside. There is obviously more happening than what meets the eye right now, but I have faith that this creative team will give longtime fans another reason to love this series when the time is right. The ghostly woman from the first issue returns once more, and while both Shadowman and honestly myself included don’t recognize who this person is, it’s clear she is a conduit for the answers we need moving forward and could even be a key to tie this series into what we’ve seen come before. Only time will tell.

For now, it’s simply a great time to be a Shadowman fan. Shadowman #2 brings all the horrors you could want, along with just the right superheroic touch to set the story in the Valiant Universe in an exciting way. The mystery deepens here, revealing potentials that will have any fan ready for the next issue and you certainly don’t want to be too far behind when it inevitably unravels for the worst.

So head over to your LCS or preferred digital platform and get your copy of Shadowman #2, trust me you won’t regret it!

Valiant takes the horror genre by the reigns with Shadowman #2, delivering an issue packed with grotesque monsters and an unravelling dark mystery that you do not want to miss out on.