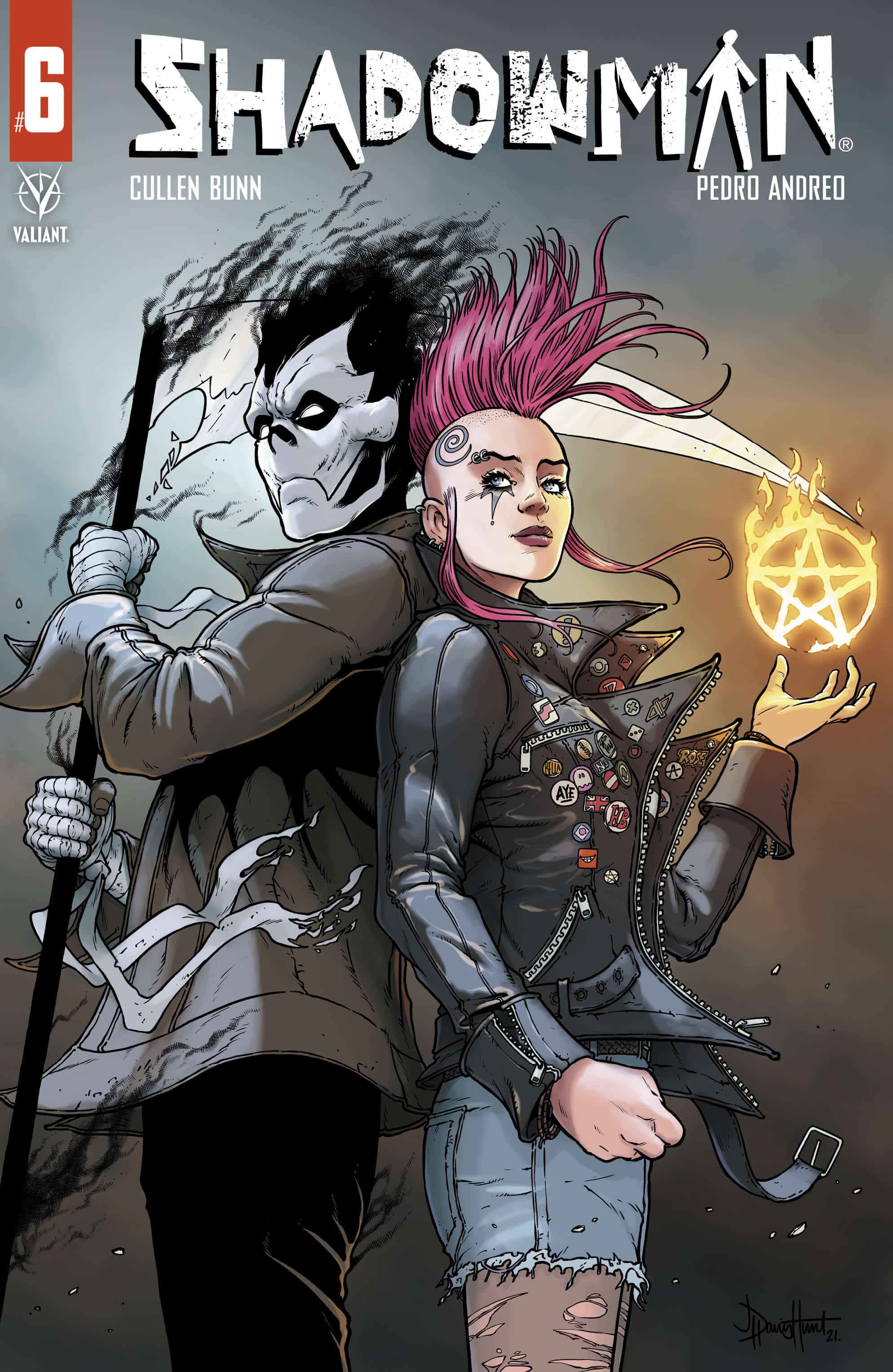 When the horrors from the Deadside spill into the world of the living, Shadowman is going to need some back up…

MAN! I just can’t with this Shadowman run, it’s really the cream of the crop. Horror and superhero combined like never before. Issue six is a big one, the world is changing and Shadowman needs some allies. Lucky for him a spunky brit with a bright pink mohawk is here to help! Yep! It’s the return of Punk Mambo! Cullen has written her before and he’s always done such a fantastic job. He really fits well with Punk’s voice, almost as well, if not better than Shadowman.

Not only do we get to see more of Punk, but we also get to see more of the Deadside herself and just how powerful she is! I’m in awe of this new “bad guy”. She’s the right mix of creepy, deadly and fun. Her outfit and look is just so cool! I wish Valiant did action figures, cause she’d make an amazing one. Honestly everyone in this series would be such a cool action figure. But more on the art in a little bit. First I want to talk more about Cullen’s writing talent. I’ve been a big Cullen fan before, as I’ve said in previous reviews, so I’m always excited to see him do comics like this. Cullen’s writing style really works for stories that border the light and dark. He uses some extraordinary themes in this issue, and it really affects the story.

We literally see a Shadowman we’ve never seen before, someone who has opened his eyes to the truth and wants to change the world. This issue really has some of the best dialog in comics, not only in character interaction, but even Shadowman’s solo speeches are so well done. I REALLY hope Cullen sticks around with Shadowman. I know Valiant likes to shake things up with talent, but under Cullen’s pen Shadowman has truly started to stand out. 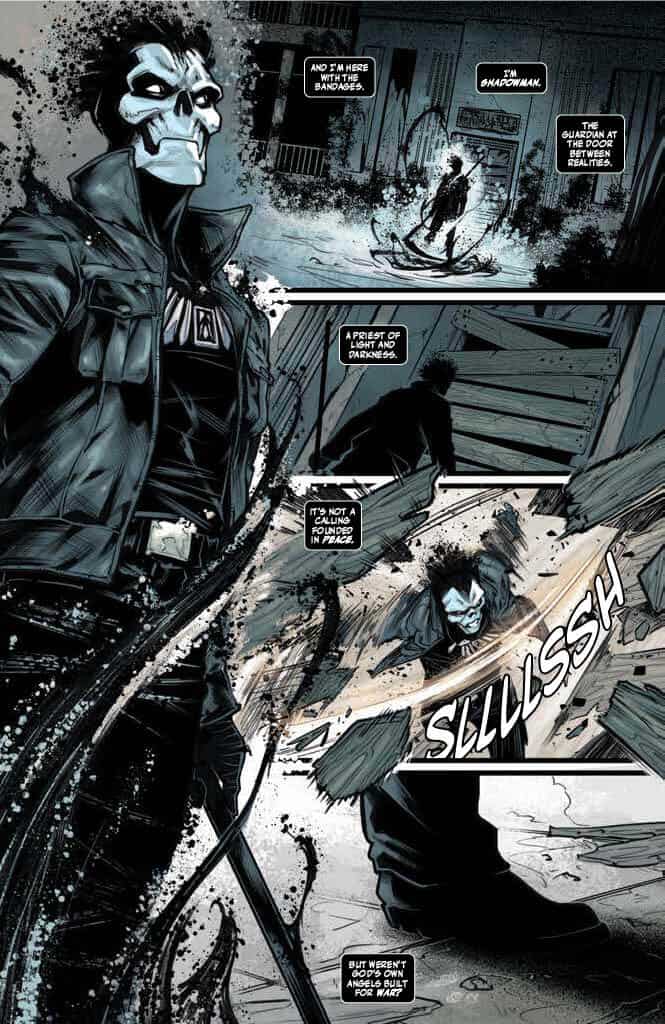 But on to the art! Man, Pedro is one talented man. When I first started reading this issue every page was so well done, but one page very early on made me stop reading and just sit there and appreciate how beautifully dark this art is. The way Pedro’s art flows from panel to panel is just what makes comics so special and different from any other medium. His art reminds me of why I love panels and how comics blend together in such interesting ways. Pedro’s art last issue was stunning, but this issue really shows why he is so right for this series. 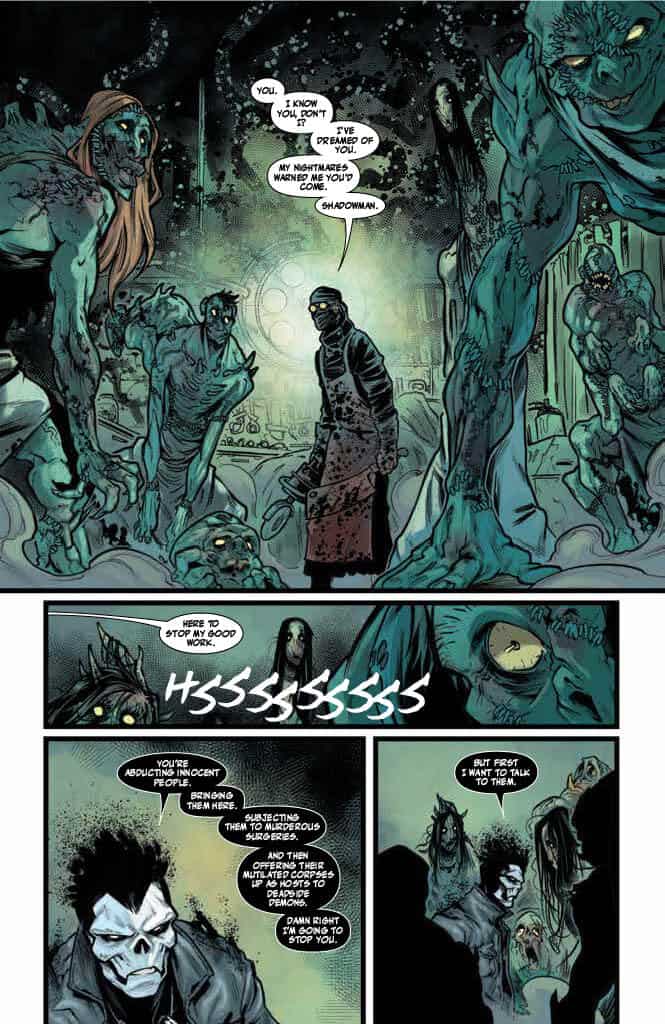 The flowing art of the first few pages is suddenly halted when Shadowman runs into trouble. Pedro’s art goes from relaxed and alluring, to spooky and jarring (in the best way). The way he’s drawn characters in this is  so different, Punk looks magnificent and the facial expressions she has in this issue are so full of life and sarcasm. The coloring in this by Jordie is also something to be astound by. They really take Pedro’s art up a notch. The way they use color to boost the smooth parts of Pedro’s art, and then to take a turn and when things get gruesome, and have those same colors change into something that looks gross (again, in a good way) and spooky. 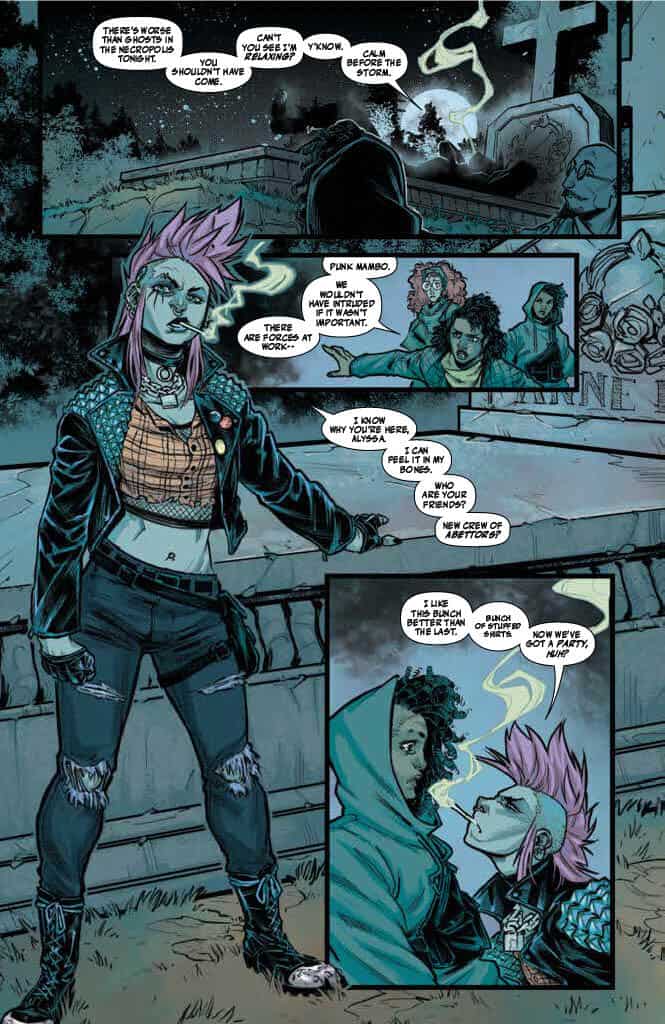 I really can't wait for the next issue, this event has been really something so far! It stands out and I believe, will continue to stand out as one of the best events Valiant has done. I'm excited to see how the world changes and how the Deadside changes people too. Horrible things are coming, and I just love it!