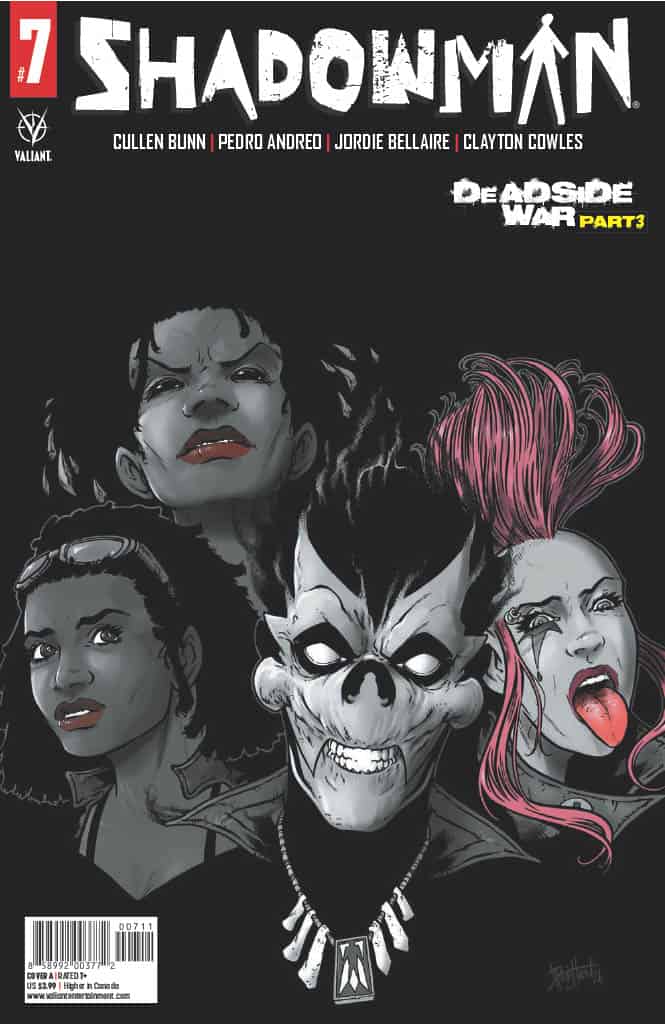 The world has been invaded. The Deadside spills through. Shadowman- Punk Mambo- Alyssa and the Arbettors struggle to keep the horrors of the Deadside at bay- but are they in a losing battle?

Man! The writing in issue 7 of Shadowman: Deadside War is some of the best writing in Shadowman yet. Cullen has really out done himself with this issue, and there is only one issue left! It can only go up from here! Or down? Whichever way the Deadside is! The thing I love most about this issue is that it’s all internal dialogue from Shadowman’s head. Behind that is a ton of action and fighting, so it makes sense. Not like there is time to chat with a war going on. We get some amazing guest stars in a couple panels, which is a BIG deal for me. 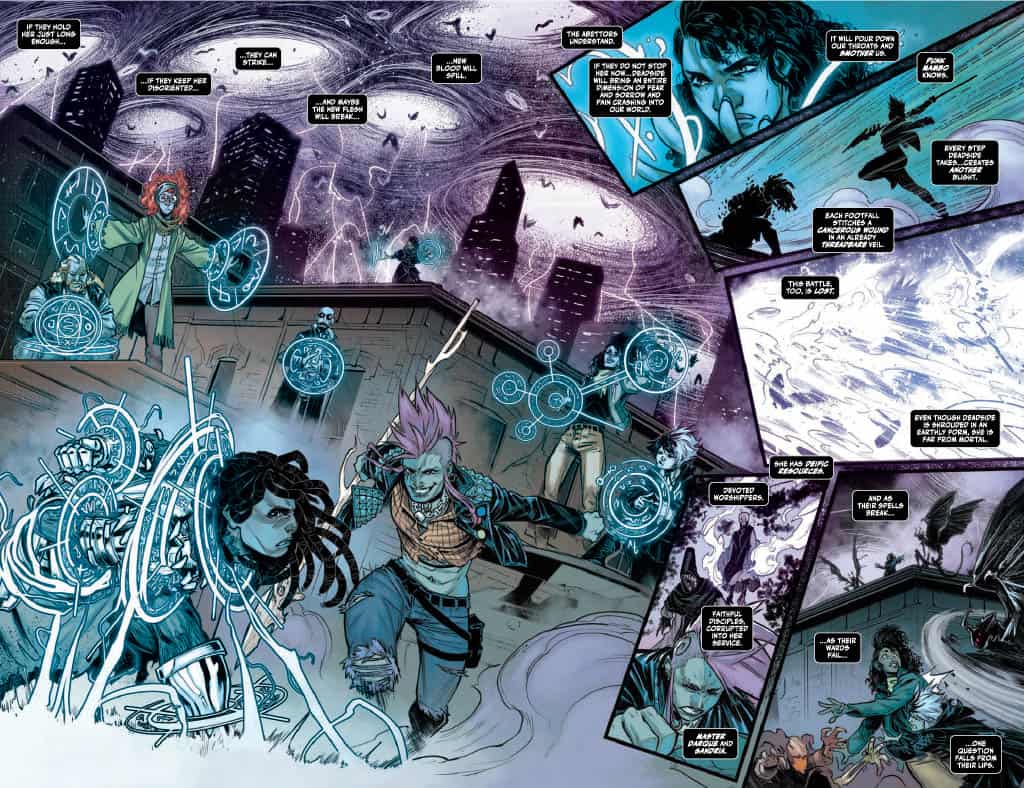 The past series of Shadowman have been great, of course. But the one thing that the series always lacked, in my opinion, was connectivity to the Valiant Universe as a whole. Yes, we got to see Ninjak and Faith go to the Deadside, and some minor interactions with other Shadowman cast. But Shadowman as a whole was kind of isolated, in his own little supernatural side of the universe. But, with Deadside War, it’s kinda a big deal! The whole world is dealing with this, and it’s only going to get bigger; leading into a brand new series in July, Book of Shadows! A team book for Shadowman, finally! But all that lies ahead. This issue is just the spark that ignites all that! And Cullen is doing an amazing job at making this issue stand out above the rest! 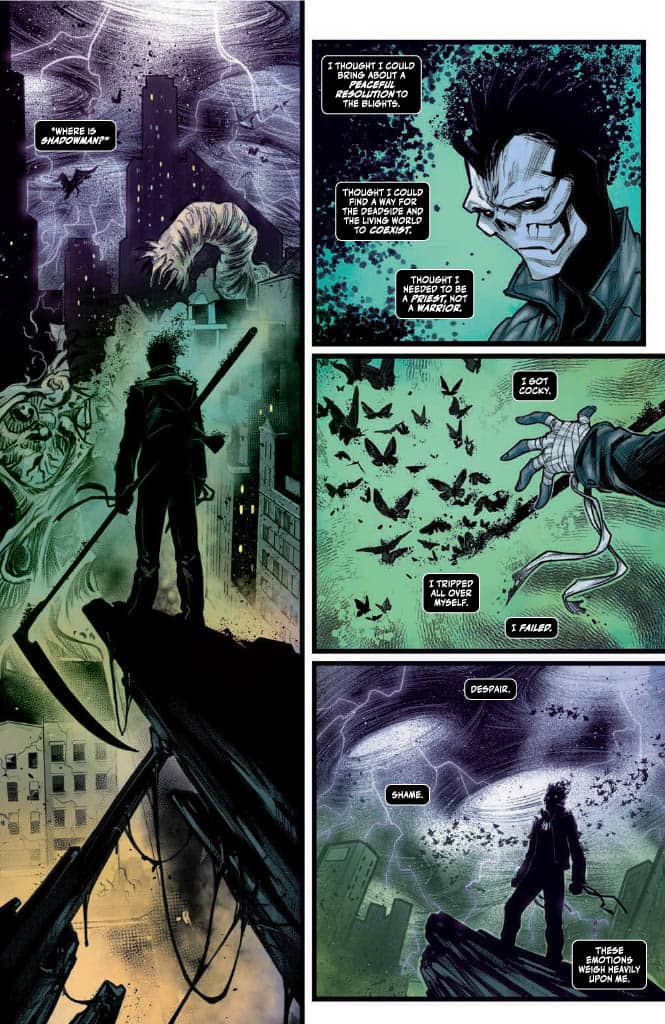 And the art!? What can I say about Pedro’s incredible talent! Shadowman has never looked this cool! The fight scenes were stunning, the creatures were fun, yet terrifying. Pedro is showing himself to be one of the top Valiant artists around. He has such a large style to his work, where he fits into what he needs. You want some cool looking magic? He can do it! Want some images of Shadowman showing emotion? Yep, he’s got that too. Want a truly horrible looking monster? Oh boy, does this issue have that! I hope we get more Pedro doing Shadowman after this! I know Book of Shadows has a different artist, but I plan to follow Pedro’s talent wherever he goes next! The color’s from Jordie are also beautiful, they add some shadow and light to the book, the blue color in the magic, and the darker colors from Shadowman himself are fantastic. But then you also got them giving all these fun and diverse colors to the creatures. So smooth! 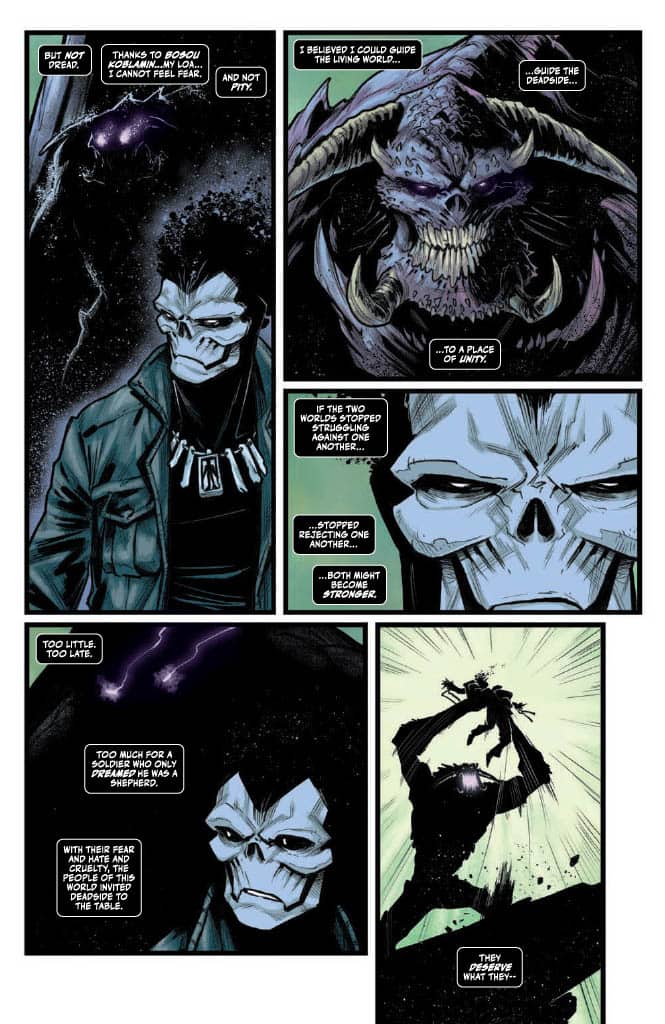 This event has been one of the best things Valiant has done! I feel like it will have such a huge fallout and I can’t wait to read that next issue! This is going to change the universe forever, I can tell! Seriously, if you’re not reading this, you’re missing out! Go back and buy all of Cullen’s great run! Then come join us for The Book of Shadow’s in July!