Shang-Chi #1: A Low Down Dirty Shang 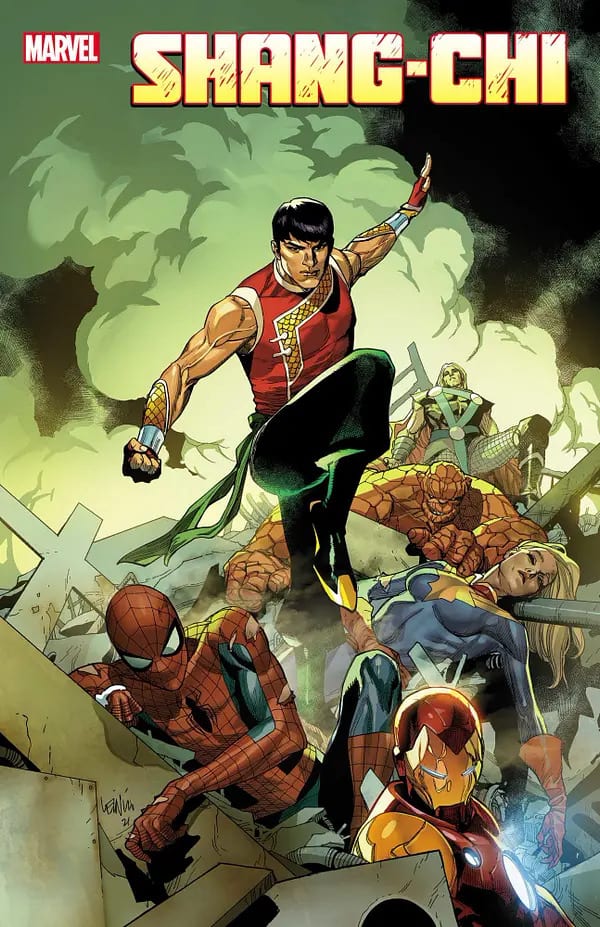 Shang-Chi and his family are back! And this time, they’re colliding head-to-head with the Marvel Universe’s biggest heroes! Shang-Chi has finally taken his place as the leader of the Five Weapons Society. But using an evil secret organization as a force for good won’t be easy. And it’s about to get a lot harder when Shang-Chi’s fellow super heroes, like the amazing Spider-Man, start to see him as the bad guy! Gene Luen Yang and Dike Ruan return to bring you the next chapter of this Marvel legend! 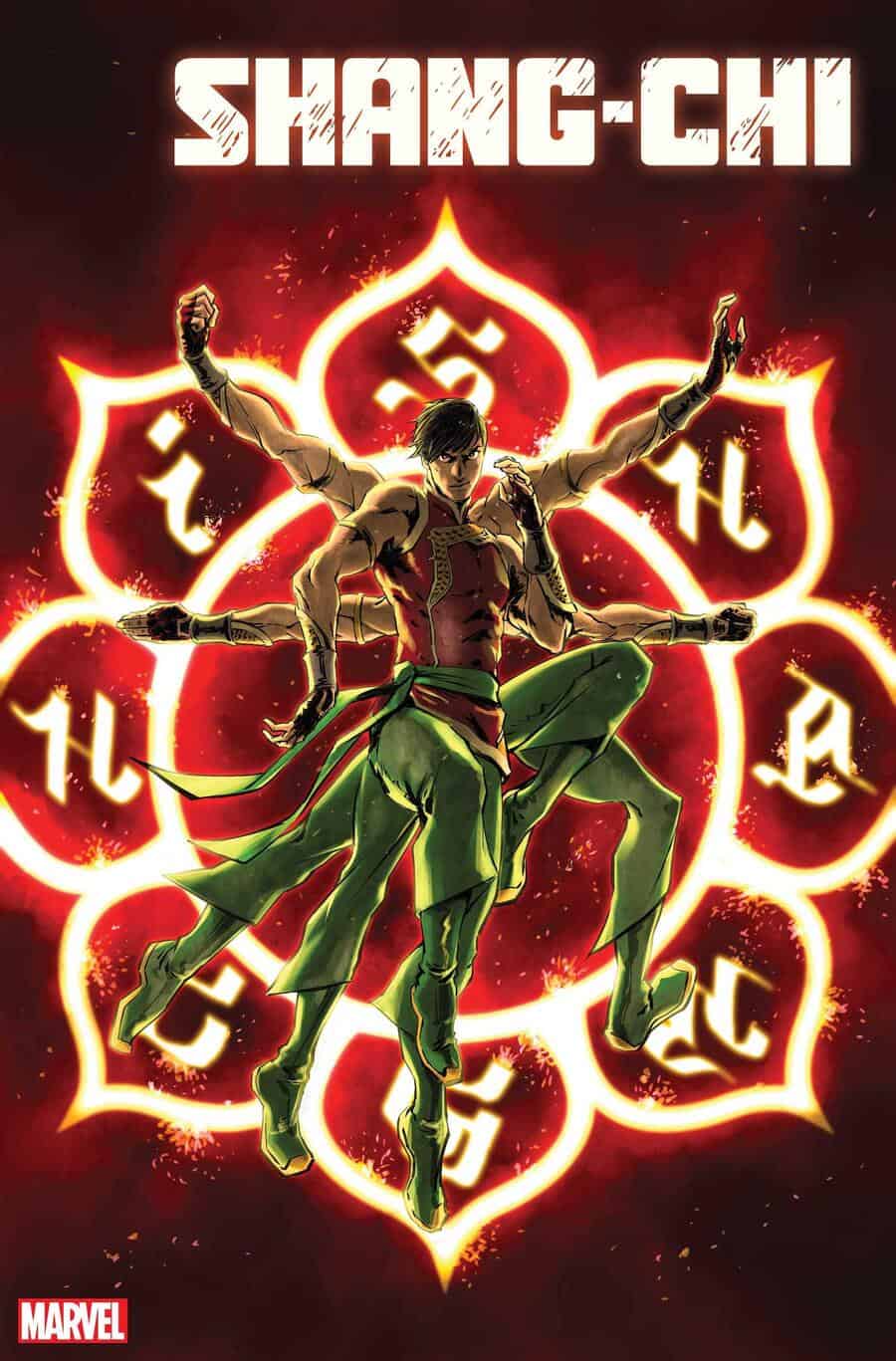 Shang-Chi is back in his very own ongoing just in time for his new movie Shang-Chi and the Legend of the Ten Rings, and Marvel has come out with kung fu feet flying. Gene Luen Yang and Dike Ruan, the powerhouse creative team behind last year’s five-issue mini are back, and they are here to show you why we should have had a Shang-Chi ongoing for decades. We’re put right into the middle of where the team left us off with, where Shang is now in charge of his father’s organization, the Five Weapons Society, and he’s determined to reform it, and his previously unknown brothers and sisters. One of his sisters, Esme, is here, and she is adorable. She’s like Shang’s Damien Wayne, a vicious little spitfire who has no problem poking and needling Shang for comedic effect, and she’s just a joy to read. We also get our obligatory Spider-Man team up, but honestly he wasn’t really needed, the story is that good. I’m not complaining, because Spidey and Esme are comedy gold together. Esme and anyone she comes in contact with is comedy gold here in this first issue. 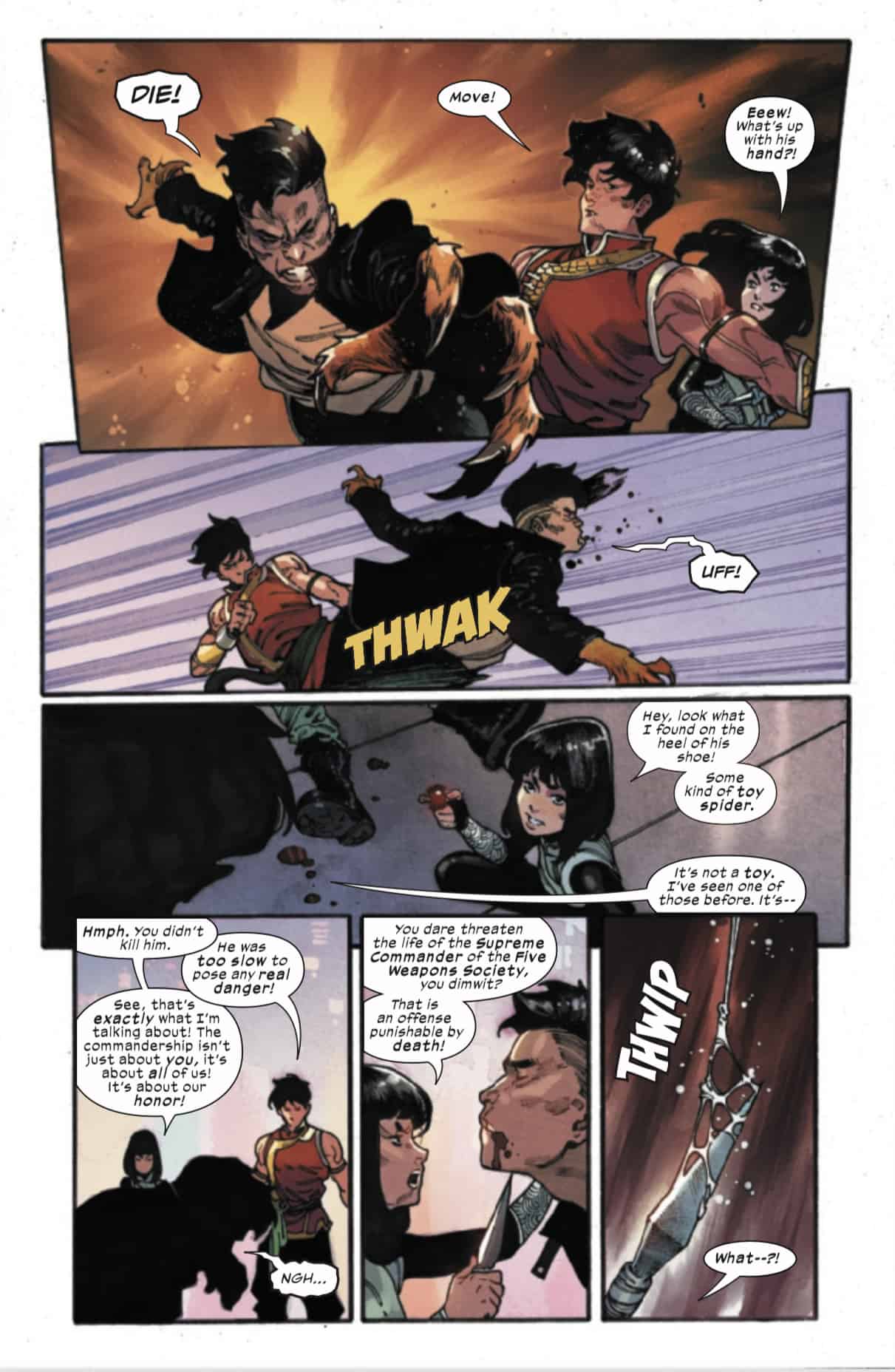 History lesson on Shang-Chi—he was created by Steve Englehart and Jim Starlin in Special Marvel Edition #15, but was so popular it was renamed The Hands of Shang Chi: Master of Kung Fu by issue #17. Riding high off of the success of the Bruce Lee martial arts films that took America by storm, Marvel licensed the character Fu Manchu, a villain from the Sax Rohman novels, and created Shang as a previously unknown son, who was determined to stop his father’s organization at any costs. The series lasted for a total of 125 issues, making it one of Marvel’s longest running series headlined by a POC (with Power Man & Iron Fist as the longest). The series was simply amazing, especially once Doug Moench took over writing. 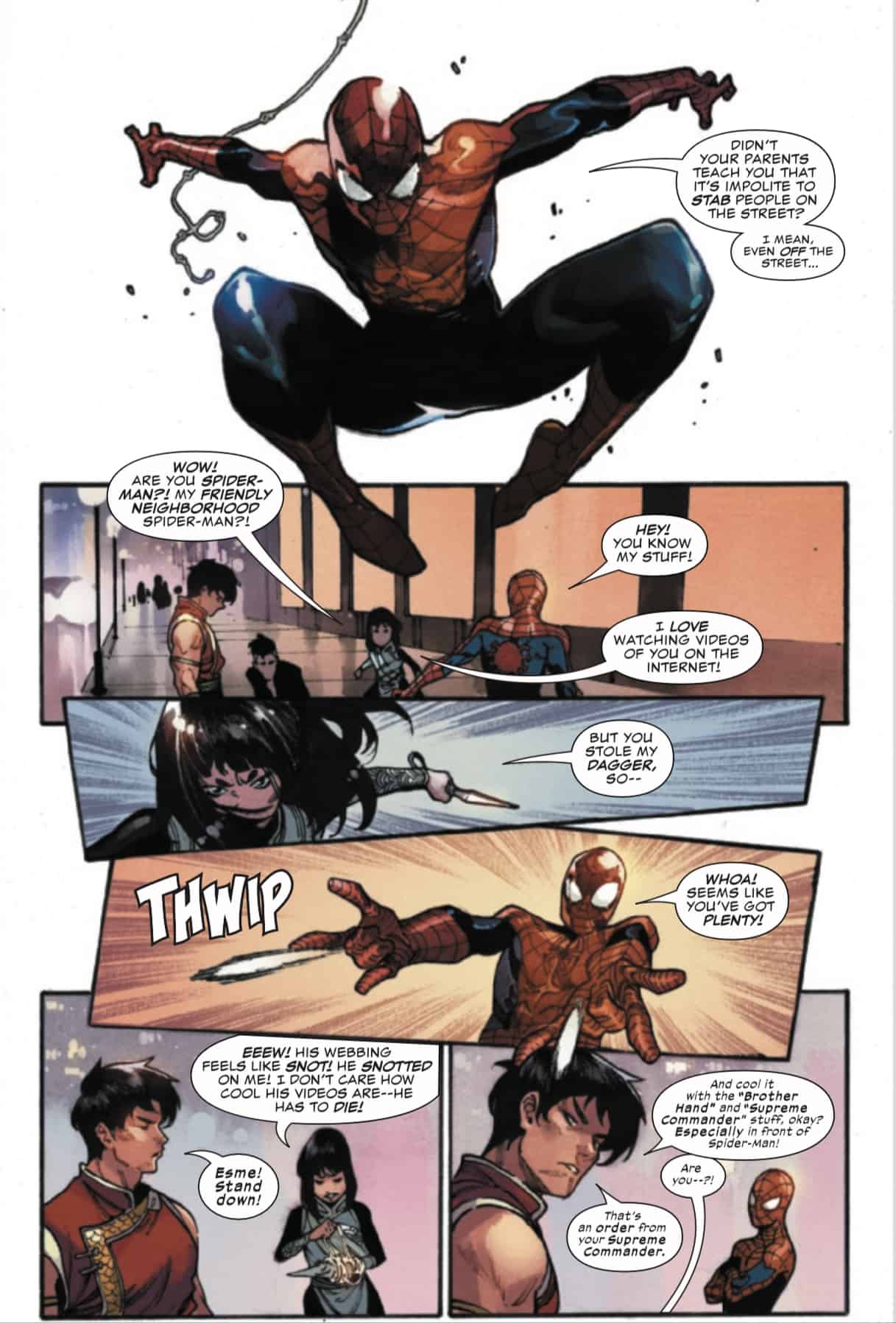 Dike Ruan’s back as the artist, and his work is just phenomenal here. Fluid, full of motion and life, the characters are a joy to watch. It’s like poetry on the printed page. Ruan gives these characters real personality. His Spidey is giving me notes of Coipel, especially from his brief run during the Spider-Verse storyline. I caught myself just drooling while looking at this book over and over again. Lest I forget, Tríona Farrell’s colors, and her palette is amazingly complimentary to Ruan’s pencils. We’re getting bombastic effects and characters from this art team, yet Farrell’s colors are keeping in line with the noir lense a story like this story dictates. This team could go places. The cover artist is Leinil Francis Yu, and he’s doing what he does best. His Shang Chi is just majestic, and evokes power. Standing over the bodies of some of Marvel’s heaviest hitters, Yu’s Shang says he’s here to stay.

There are few series that I think are flawless from the jump, but this is one. I believe in this first issue so much I’ve ordered multiple copies that I plan on passing around at work. If the rest of this storyline is this good, Marvel’s got a stone groove winner on their hands.

Shang-Chi #1: A Low Down Dirty Shang