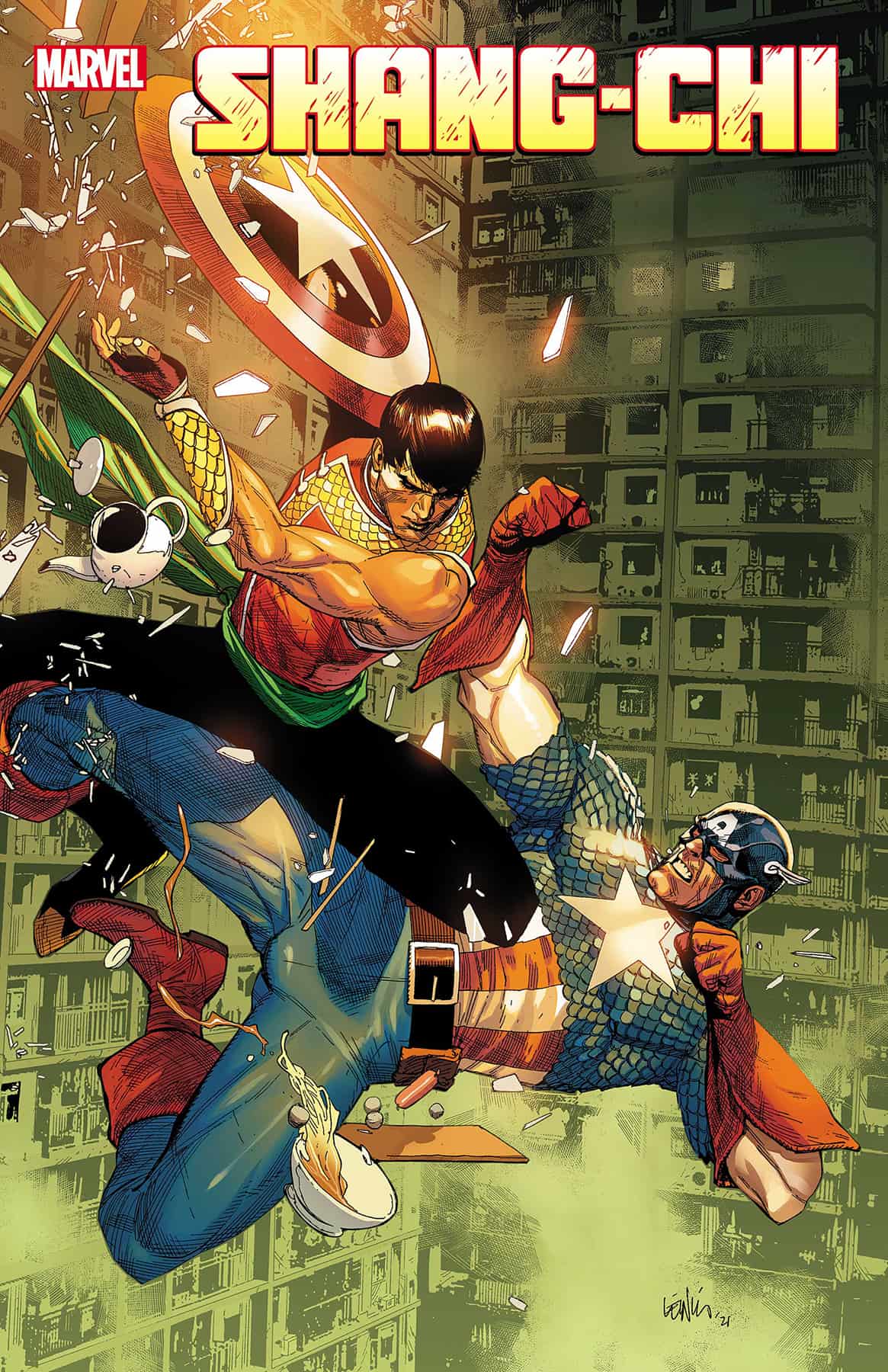 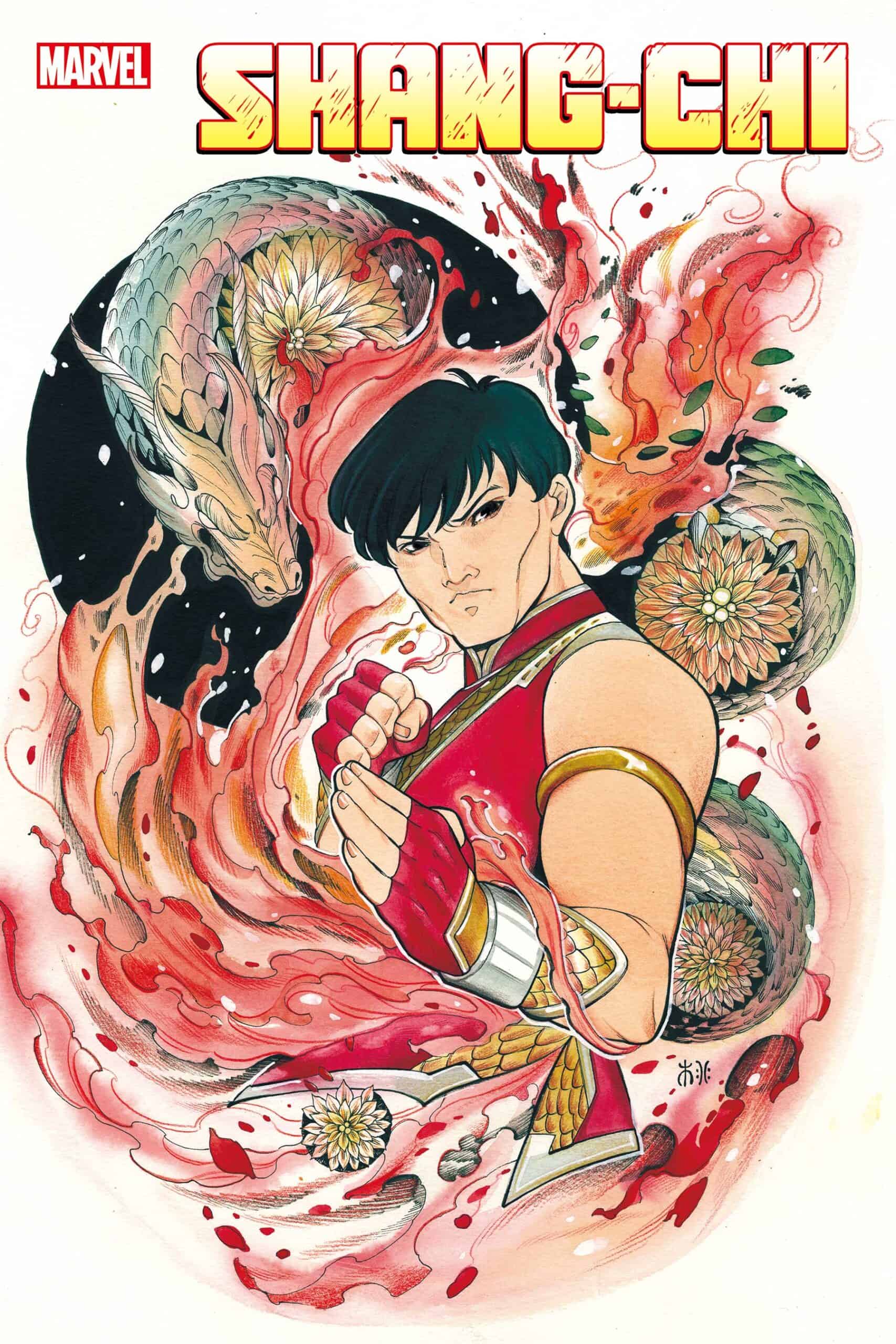 SHANG-CHI VS. CAPTAIN AMERICA! There’s a Cosmic Cube for sale, and everyone from Hydra to AIM to the Hand is ready to pay up for it. But Shang-Chi and his Five Weapons Society might outbid them! Unless a certain Star-Spangled Avenger has anything to say about it…Uh-oh...

Issue two of this brand new era for the Master of Kung Fu, and it is everything it should be. You have humor, adventure, drama, spy thriller intrigue, with some superheroic fisticuffs to remind you what world we live in. Gene and Dike take us and the crew to Macau for an auction of rare items that is hosted to the biggest underworld organizations, outside of the American based Maggia. A real elite list of clientele are here, and we’re introduced to a new Marvel villain, Lady Iron Fan. Gene seems to be a fan of the Chinese novel, The Journey to the West, by Anthony C. Yu, and is the second character Gene has adapted from the novel. 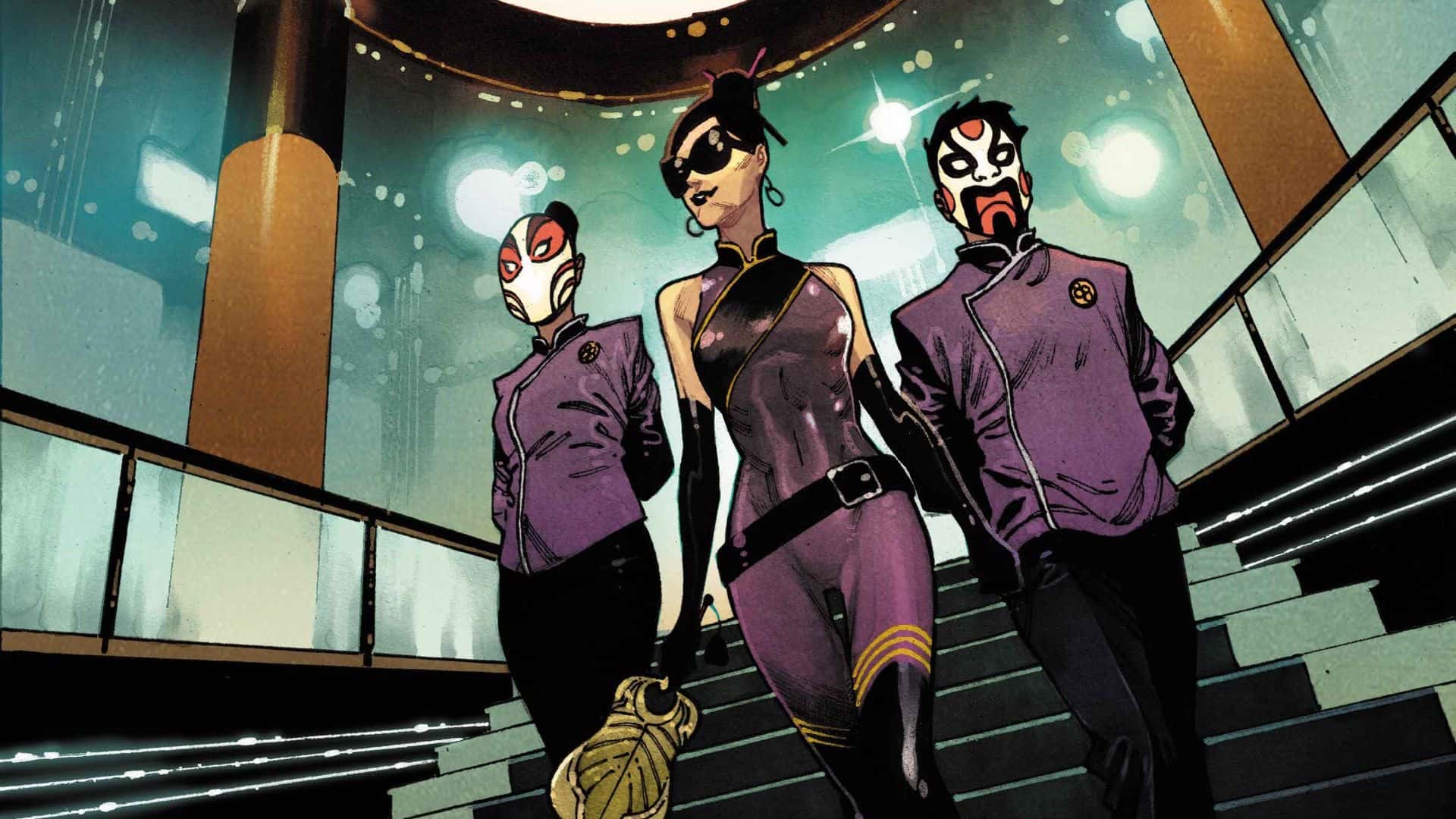 Gene and Dike give us a real who’s who with this issue, featuring everyone from Madame Hydra, and her goons, to MODOK, and AIM, the Hand, etc, and then we have Shang, along with his brother Deadly Sabre, to bid on a Cosmic Cube. Captain America is the guest prized fighter in this issue, and after some deception, things aren’t looking like everything is kosher. There’s also a new player on the board, but who he is, and what his ties are to Shang and the Five Weapons Society is still unclear, but from the dialogue it’s nothing good. 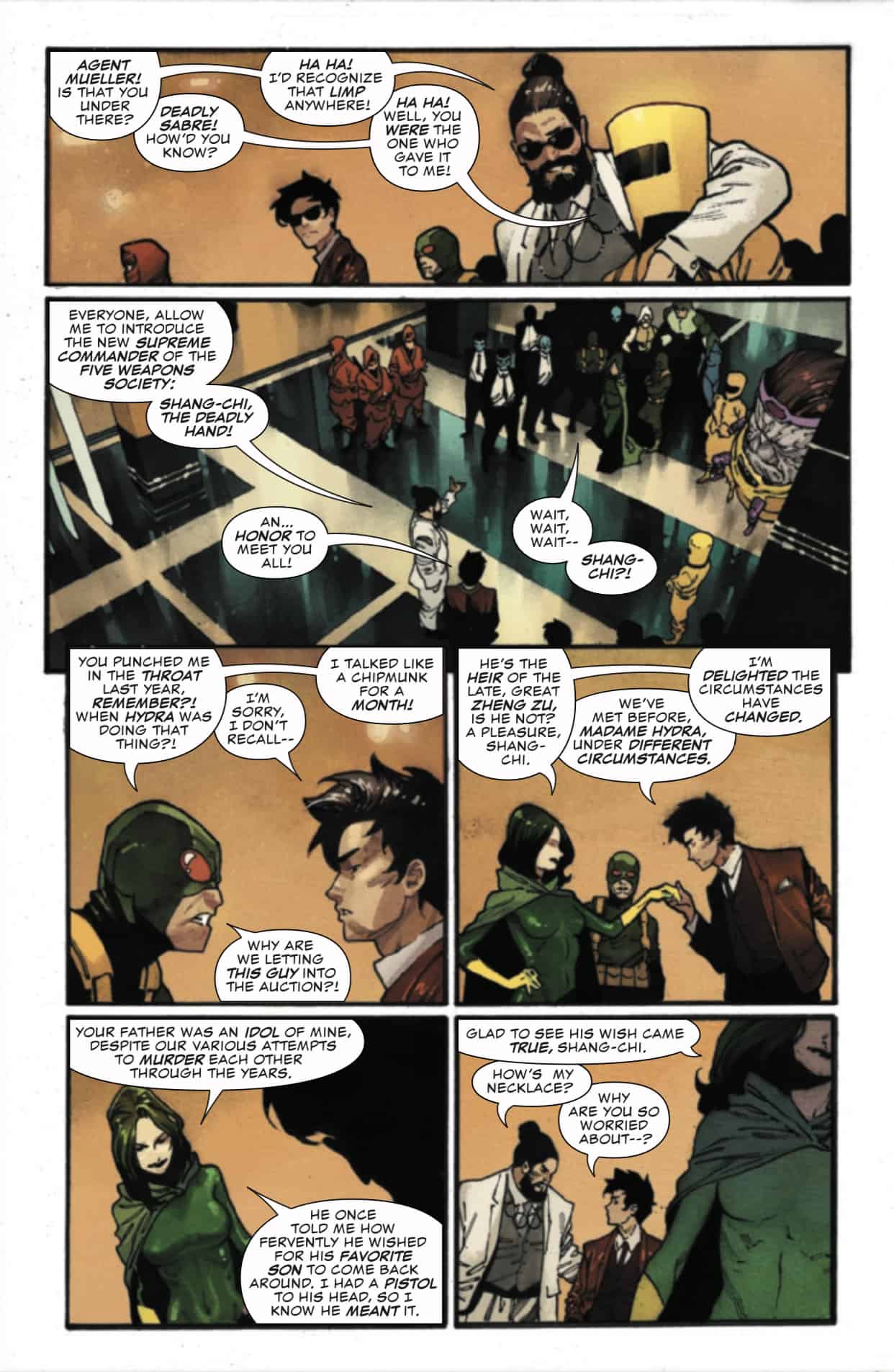 There’s obviously a past relationship between Sabre and Iron Fan, and this creates tension between the brothers, and what comes from the twist one can only guess, but I’m hoping it’s for good comic reading drama. Not everything in the issue is focused on serious spy craft, Gene seems to be taking some cues from the Hulu series MODOK, because MODOK delivers in every panel he’s in. You can’t help but chuckle reading his dialogue. If I have any complaint, it’s that there was very little Esme. 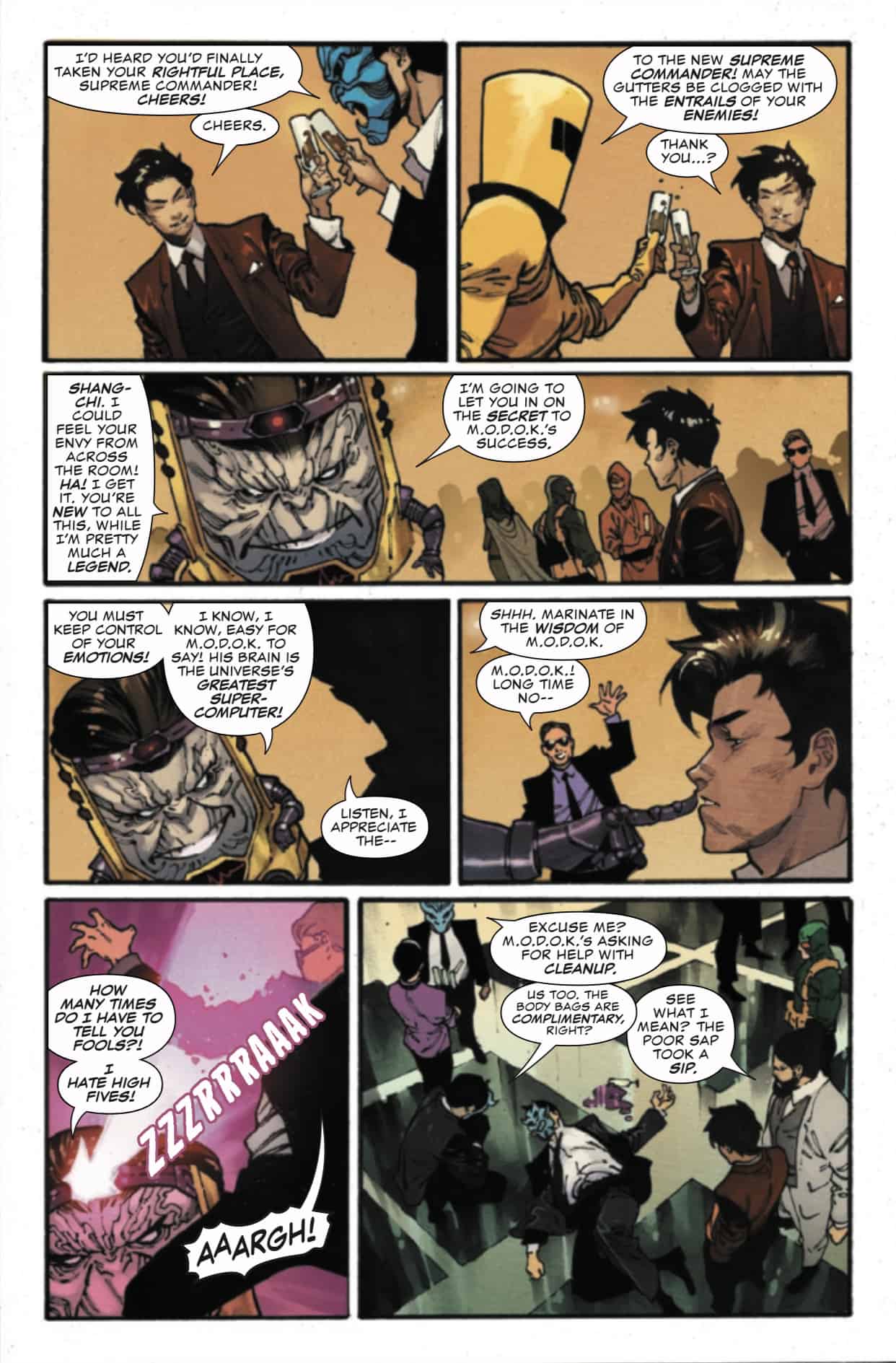 Dike Ruan continues to impress me with every issue, and it’s amazing what he’s doing here. Full of life, and energy. The fight scenes are kinetic, his designs for Lady Iron Fan and her henchmen are top notch. His art is so good, I fear Marvel will yank him from this book to put him on a bigger title, because he’s putting out Olivier Coipel level of work here. I can’t stress enough that people need to give this book a chance, because this team has delivered above and beyond in these first two issues.

It’s only issue two but we’ve already been treated to a fight with Spider-Man, Captain America, agents of AIM, Hydra, and the Hand, plus a new addition to Marvel’s female villain pool, and subterfuge and intrigue. Gene’s adaptation of a figure from an old Chinese adventure book is pure magic. Gene and Dike’s working relationship is giving me Claremont & Byrne levels of excellence, because each issue seems they push each other to do better than the last.