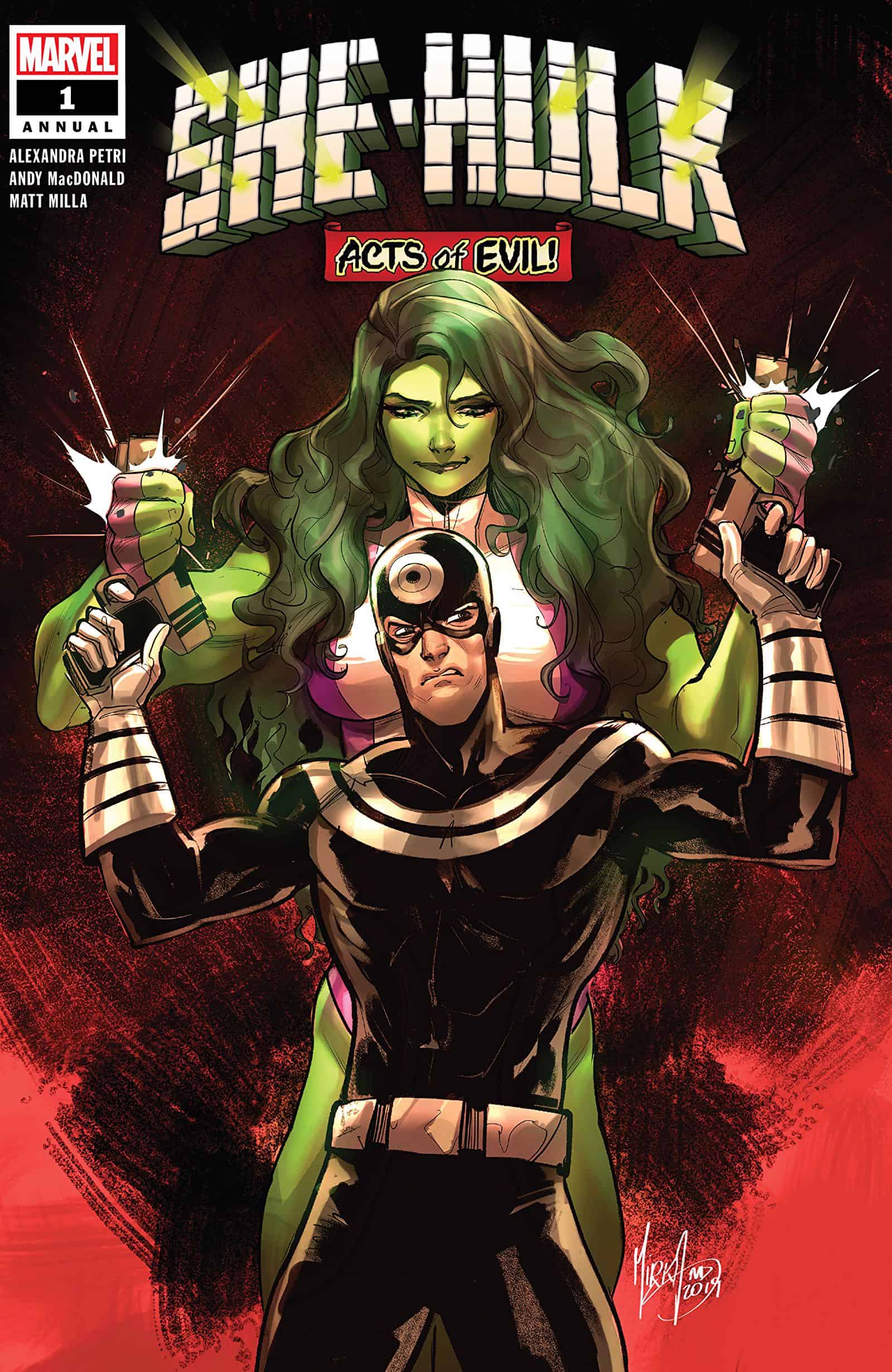 I'm gonna have to fight the urge to sing that one lawyer song from Futurama but let's do this aight? Many will remember Machinesmith from one of two things 1. Being a goofy yet considerable pain in Captain America's butt back in the day or 2. Being a frenemy of Ant-Man in his recent Astonishing solo run. Either way odds are you remember him at least somewhat fondly as being the kinda goofy that only works in superhero comics.

Here Machinesmith tries and fails to get Jennifer Walters aka She-Hulk to represent him so he can reclaim personal property he "forfeited" by being dead. Of course she says "nah homie" channeling her inner Rosa Parks but it brings to light an interesting question: what legal rights do cybernetic entities such as Machinesmith in his shiny new mechanical body even have? Are they considered alive why, why not? It's a very interesting quandary that considering the prominence of the Vision as an Avenger and sometime family man, would have a set precedent.

So this circles back to bite Jen in the butt of course. Reed Richards the poster child for "science meddling where it doesn't belong" decides it would be a good idea to have brain scans of all the Avengers on file so if they ever get Superior Spider-Man'd all it would take is the flip of a switch to fix said hero. Shouldn't be a problem but then Bullseye gets wind of the operation and well now you're caught up to speed.

Petri does a great job here balancing “real world” issues (as in the more grounded elements of the MU) with the more fantastic ones. On the surface one could see why an Avenger and a skilled lawyer would be quick to tell a villain no when asked to take on a case such as Machinesmith’s. One could also see why it would be a good idea to keep a “default switch” for members of a superhero team around as well considering mind shenanigans are constantly afoot. 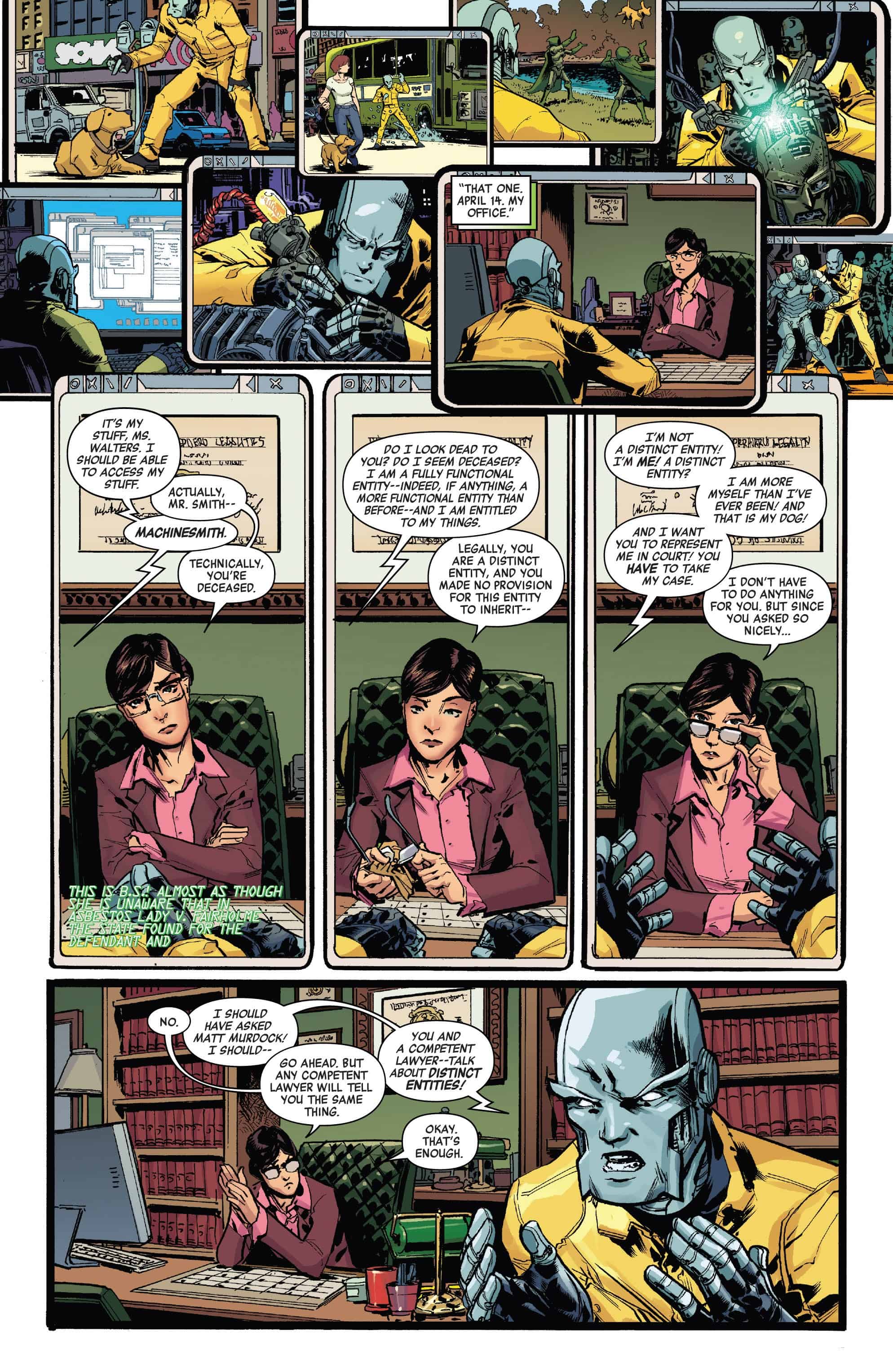 In taking these seemingly reasonable concepts and flipping them on their ear, Petri gets to tell a great “Freaky Friday” type story without giving us one we’ve seen a million times. Petri also makes us question the nature of A.I. which is always fun to ponder when done well as it is here. What makes Jen She-Hulk is it her inner self? Her hulkness? Is it being a single female lawyer, fighting for her clients, wearing sexy mini skirts and being self reliant? Petri does an excellent job leaving that open ended for the reader to decide after watching Jen’s crazy experience being forced into a robot while Bullseye runs around in her flesh.

Andy MacDonald brings a lot to the table as well. Capturing the stout professionalism of She-Hulk in lawyer mode also the hyper kinetic energy of Bullseye vs She-Hulk vs Jen as a robot in a brawl. The art shifts tone as needed almost seamlessly from panel to panel which just adds an extra layer of enjoyment to an already entertaining read. MacDonald also does a great job emoting the smarmy nature of Machinesmith without going full cartoony with it which is a thin line not to cross, so extra kudos there.

She-Hulk Annual #1 is a textbook well done annual. It self contained a great and fun story that doesn't make the reader feel like they just read a filler issue. The themes though heavily comedic also have an underlying current of weight to them which is what really makes this book shine along side some very well done art.