Sheena: Queen Of The Jungle #1-5: Where are My Friends? 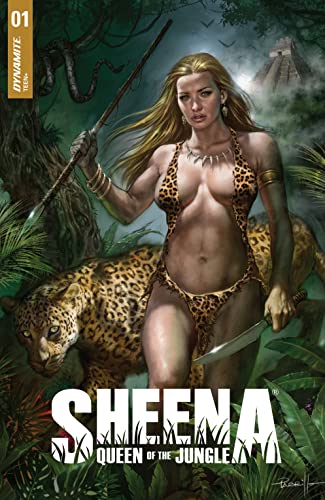 The thrilling adventure combines the classic elements of the legendary character along with a modern sensibility that will make it the perfect debut for fans new and old!

Sheena is recruited – that’s being kind, she’s kind of forced to go! - to enter the “bio-dome” -- an amazing synthesis and nature and machine, where something has gone terribly wrong. Outside the dome, she’s faced with human trickery and deceit, inside the dome, she faces the deadly jungle and a fast, murdering mystery.

Jurrassic Park meets Predator meets The Hunger Games. Sheena is Queen of all.

Issue five marks the end of this first arc of the new Sheena Volume by Dynamite Comics. The writing of this is terrific. We actually get a character arc for some of the supporting characters in this series. I particularly want to make note of Ransome. He is definitely shown to be an antagonist in these stories but he is given a human side in this arc. We get a little of his motivation, he has more interest in saving his daughter. Admittedly she should have never been placed in this situation in the first place but he has more interest in rescuing her than anything else and he sees the Jungle Queen as the best way to accomplish that goal.

We also meet the enigmatic Beatrice Toussant, the Haitian woman. We learn that she is a mystical creature in her own right, being identified as a “skin walker.” She has the ability to transform into the giant cat Sheena encountered in the earlier issues of this arc. In a way the concluding issues focus more on her and her motivations than it does Sheena. Sheena’s only motivation in this story is the safety of her animal friends. In a way this becomes Beatrice’s story. In the end she is not a total ally to Sheena, she has a more vicious streak in her, a streak that Sheena constantly tries to temper in her interactions with this woman. I can see this character as being a frenemy of Sheena versus an outright ally or antagonist.

The art is great. The designs of the characters are sexy without being overly the top. They look believable in this story. Since most of this story takes place in jungle scenery, there is ample backgrounds of the terrain. I believe the use of backgrounds really centers the action and creates a terrain for the characters to inhabit.

A new writer takes up the helm for Sheena and this is not a reboot but as continuation of the stories started by Marguerite Bennett in the previous volumes.  Sheena is bright intelligent and passionate. She is not an easy adversary.

Sheena: Queen Of The Jungle #1-5: Where are My Friends?