Sideways #13: To Be Continued 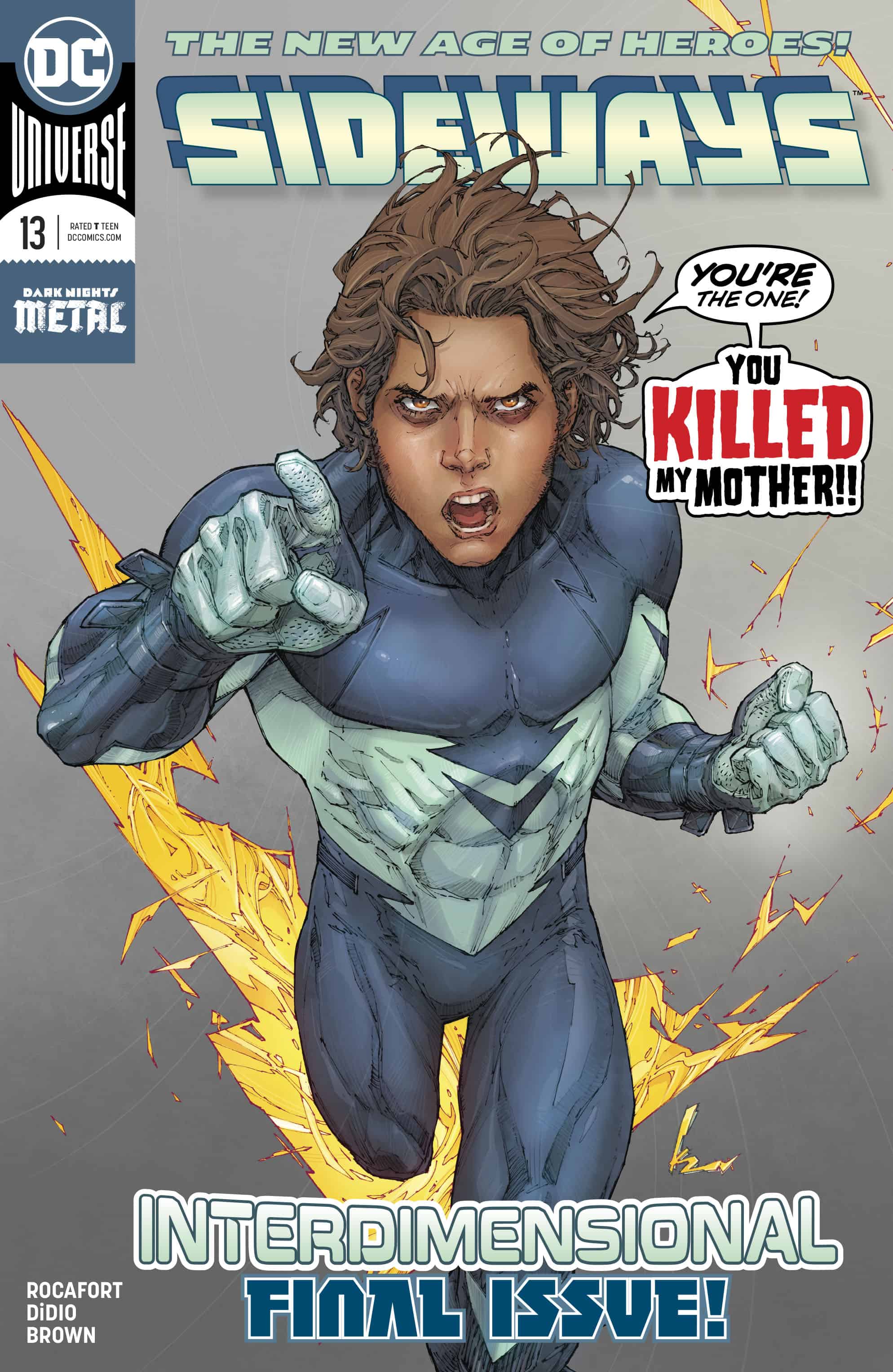 In this series' final issue, Derek "Sideways" James gets closure with the discovery of his adopted mom's killer... 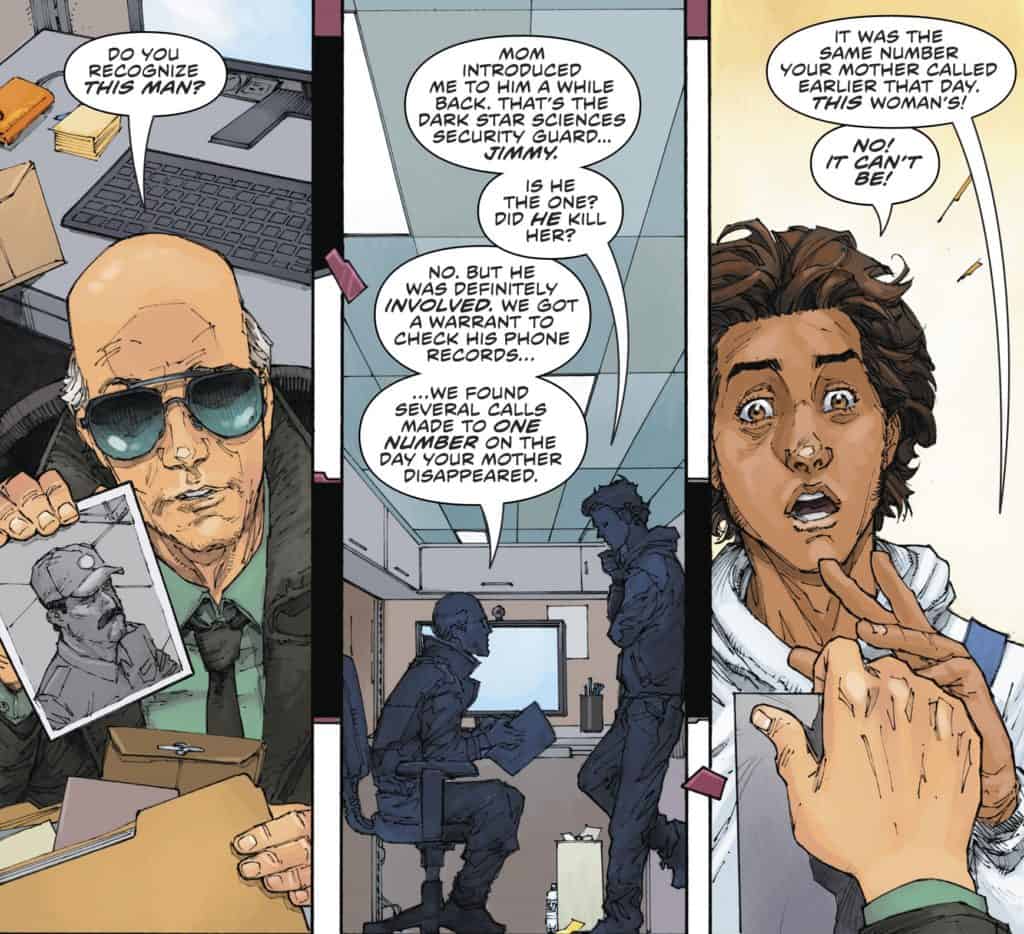 ...then gets shocked by the sudden appearance of his biological mother, whom he's never met... 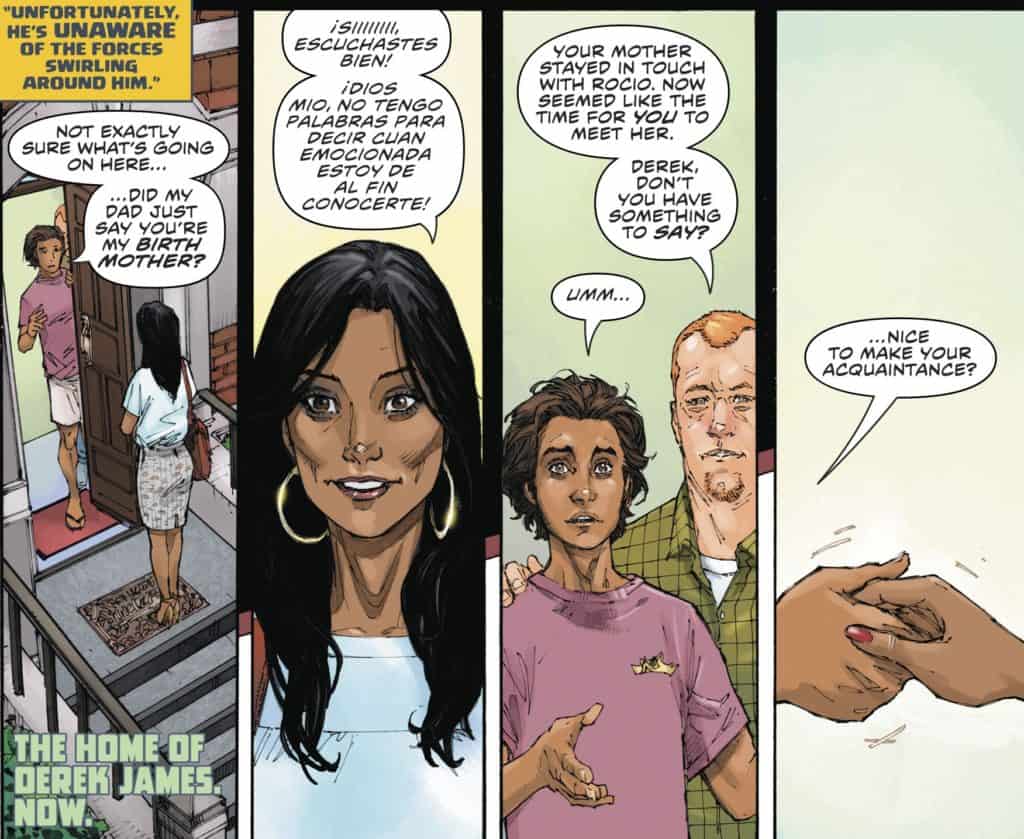 ...and all the while, Tempus Fuginaut and the mysterious Giver wax philosophical about the rightness or wrongness of Giver's decision to imbue Derek with his "rifting" powers in the first place. Major clues are dropped that Derek has a much, much larger role to play in the grand scheme of things than he could ever have realized - as well as the Giver's alluded-to personal connection with him. 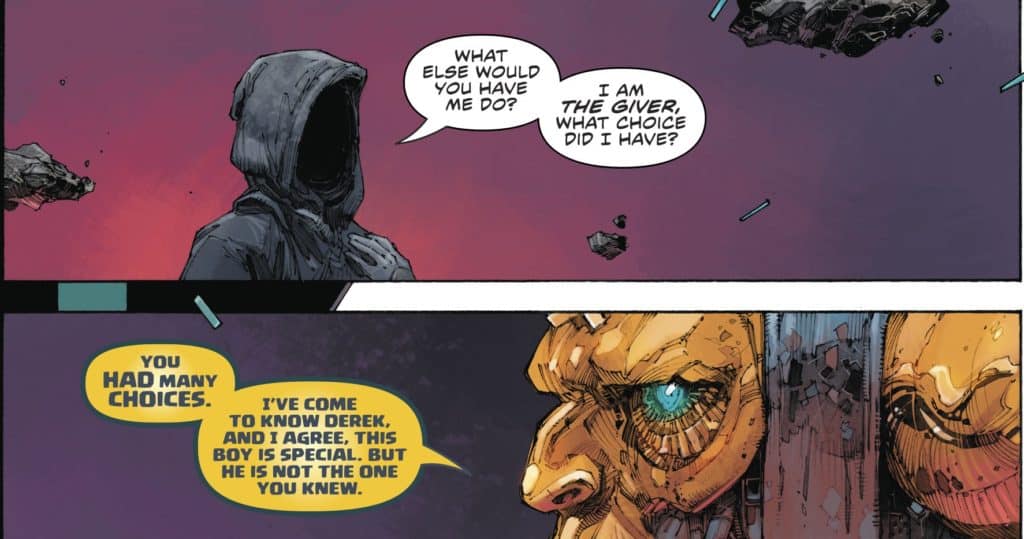 But all good things must come to an end, so for now, Derek's mostly just content to hang out with his friend Ernie and wistfully reply to the last text his mom sent him before her death. All's well that ends well... 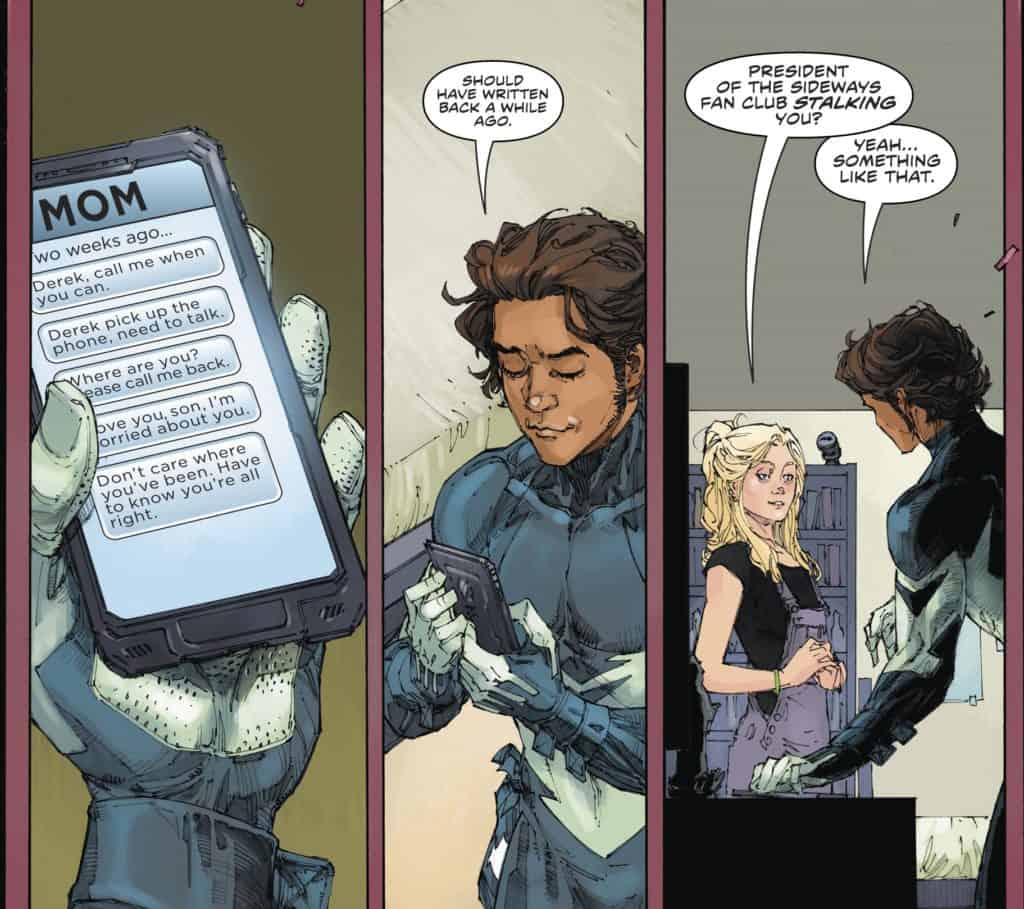 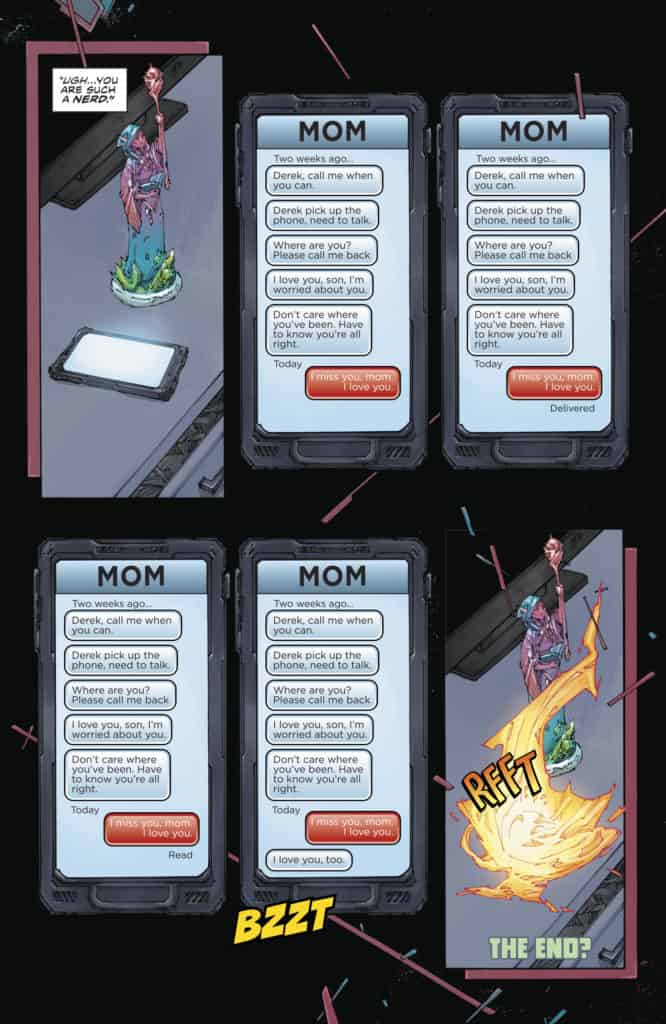 Comics is littered with the corpses of well-intended stories that never quite found their audience, and so it goes with Sideways, now the fifth cancelled books from DC’s once-lauded New Age of Heroes imprint (Curse of Brimstone has been axed but its final issue hasn’t shipped yet). Some of them become cult classics over time, many are forgotten, and some are brutally kicked around for the rest of eternity by naysayers, haters, and trolls. Wherever Sideways ultimately falls within those parameters, only time will tell, but I can say this: it was a fun little series that in the final analysis just couldn’t reach enough readers. In this market, that happens more often than not.

I could probably highlight the strengths and weaknesses of Sideways, but ultimately, it would be a futile gesture since very few were reading this title anyway. Instead, I’d like to look at what it does right as a final issue.

When a writer is faced with the cancellation ax, he or she has a couple of different options. The first can be to rush the conclusion and cram as much closure as possible into 22 pages, regardless of elegance or readability. The second is to cruise right one like the next issue is going to ship just like normal (although this practice seems to have died out for the most part after the ’70s); the third option is to dovetail the latter two options but rework the script enough that the book’s ending is acknowledged. That way, readers feel closure and even a sense of optimism that maybe, just maybe, another writer in some future comic will pick up the dangling plot threads and run with them to conclusion.

In Sideways #13, Dan Didio opts for the third option.

The mystery of who killed Derek’s mom is resolved (sadly, rather anticlimactically), and we gain some insight into how he got his powers. The mechanism for that, the very on-the-nose named “Giver,” isn’t really a character but rather a walking McGuffin – who seems to have a personal connection to Derek. Tempus Fuginaut, a Watcher-esque figure who has been guiding/watching/chastising Sideways from the start, never gets explored (really, what’s his deal, anyway?), but he does set up some intrigue concerning Derek’s role in the larger scheme of things. And for just for the heck of it, Derek’s friend Ernie name-drops Young Justice and their recent return, tantalizing readers just enough to hope that maybe Sideways’ adventures will someday, somewhere, continue. Closure, with just enough of a hint of potential things to come? Mission accomplished, Mr. Didio.

Didio is ably abetted this issue by Kenneth Rocafort, who deserves all the props in the world for bringing Derek James and his brief career as Sideways to life. And he deserves even more credit for seeing the title through to the final issue; many big-name artists would have bailed as soon as they heard their book was being cancelled. That’s a classy move on his part.

In the end, did it matter? Was Sideways enough of a quirky-cool book that it will someday amass a cult following, and somehow make a triumphant return? Or should we just be content that for the span of a year, we got thirteen issues (plus an annual) of a really fun comic that once featured a multiversal Superman with an ant’s head and Werewolf Jimmy Olsen as supporting characters? In comics, the only thing for certain are the words…

Dan Didio and Kenneth Rocafort's Sideways ends with a satisfying conclusion that leaves the door open for return engagements to the character.

Sideways #13: To Be Continued