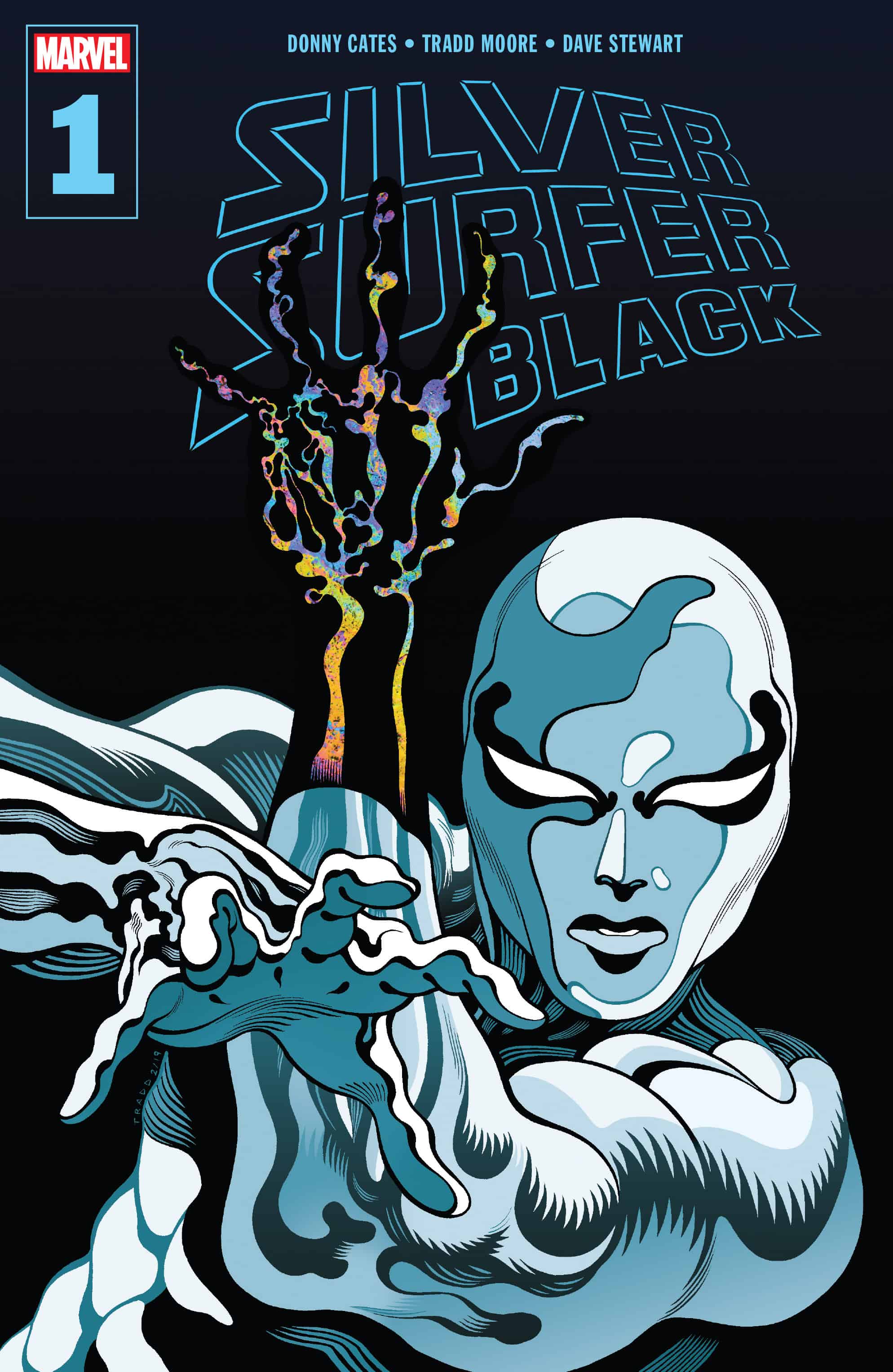 Spinning out of GUARDIANS OF THE GALAXY #1, almost the entire galaxy’s defenders have been blown through a black hole, including the Silver Surfer! But the story doesn’t end there… In order to fight back the oblivion, Surfer will have to fight to save his own soul and not lose himself to the void. Follow the Sentinel of the Spaceways on a journey that will change him forever!

The Silver Surfer returns after his rather untimely exit of Guardians of the Galaxy which saw him and many other cosmic heroes become lost inside a black hole! 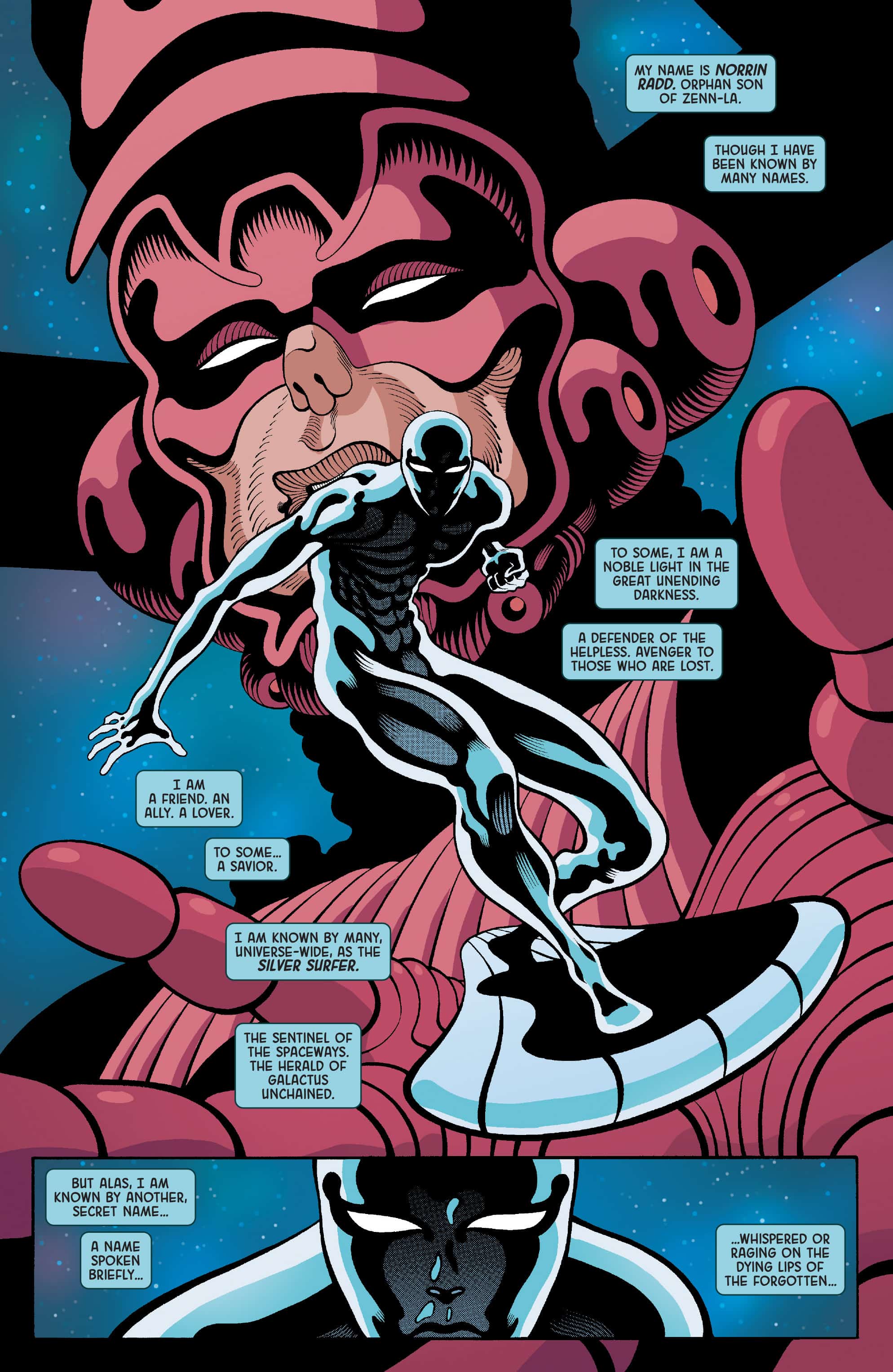 Although it has been quite a while since we have had a dedicated Silver Surfer title, the sometimes difficult to write character makes an explosive comeback thanks in part to writer Donny Cates’ unique vision and all around originality. The first issue in this miniseries is well thought out, effectively catching readers up to speed while establishing the upcoming premise, but the true star is Norrin Radd himself. Cates’ personalization of the character is heartfelt, intriguing and complex. This speaks to the fan-favorite writers’ talent as well as his understanding of how to approach some of the most complicated corners of the Marvel universe.

Initially, starting with a brief origin story of the Silver Surfer felt out of place. It read more like a first issue in an ongoing series rather than a mini that is spinning out of Cates’ current Guardians of the Galaxy series. But his story is quickly brought into relevance by the current events and the situation Norrin finds himself in on an unknown planet.

The artwork in Silver Surfer: Black is incredibly distinctive. To the point where it could even become divisive. Tradd Moore and Dave Stewart deliver a book that looks unlike anything that is currently on shelves. I believe it plays into an aesthetic that suits the Silver Surfer remarkably well though. It’s otherworldly, vibrant and abstract, but it succeeds most in contributing to this wild story that requires incredibly difficult visualizations.

While readers’ might not need to bring in a lot of knowledge about the Silver Surfer into this series, those who aren’t caught up on Cates’ previous work could be unsure of what exactly is going on. After spinning out of Guardians of the Galaxy, the first issue ends with a reference to his Venom run by revealing Knull’s presence on the unknown planet. Knull is the Lord of the Abyss and God of the Symbiotes and he was the primary antagonist in the first Venom arc. As a fan, I was really excited to see this character make an appearance. It’s great to see Cates picking up on all the seeds he has dropped throughout his work at Marvel thus far. If this is more than simple fan service remains to be seen however.

Overall, the first issue of Silver Surfer: Black is a strong start to the miniseries. It shows that this character can be done successfully with the right creative team. With beautifully distinct artwork and Cates’ bizarre storytelling with a metaphysical twist, we should be in for quite the treat over these next four issues!

'Silver Surfer: Black #1' is a wildly distinctive take on the fan-favorite character that yields some unexpectedly enjoyable results. Though not particularly welcoming for new readers, this series looks to thrust the Silver Surfer back into the spotlight in a major way.