Sins of the Black Flamingo #1: The Saint Meets the Supernatural

Sins of the Black Flamingo #1 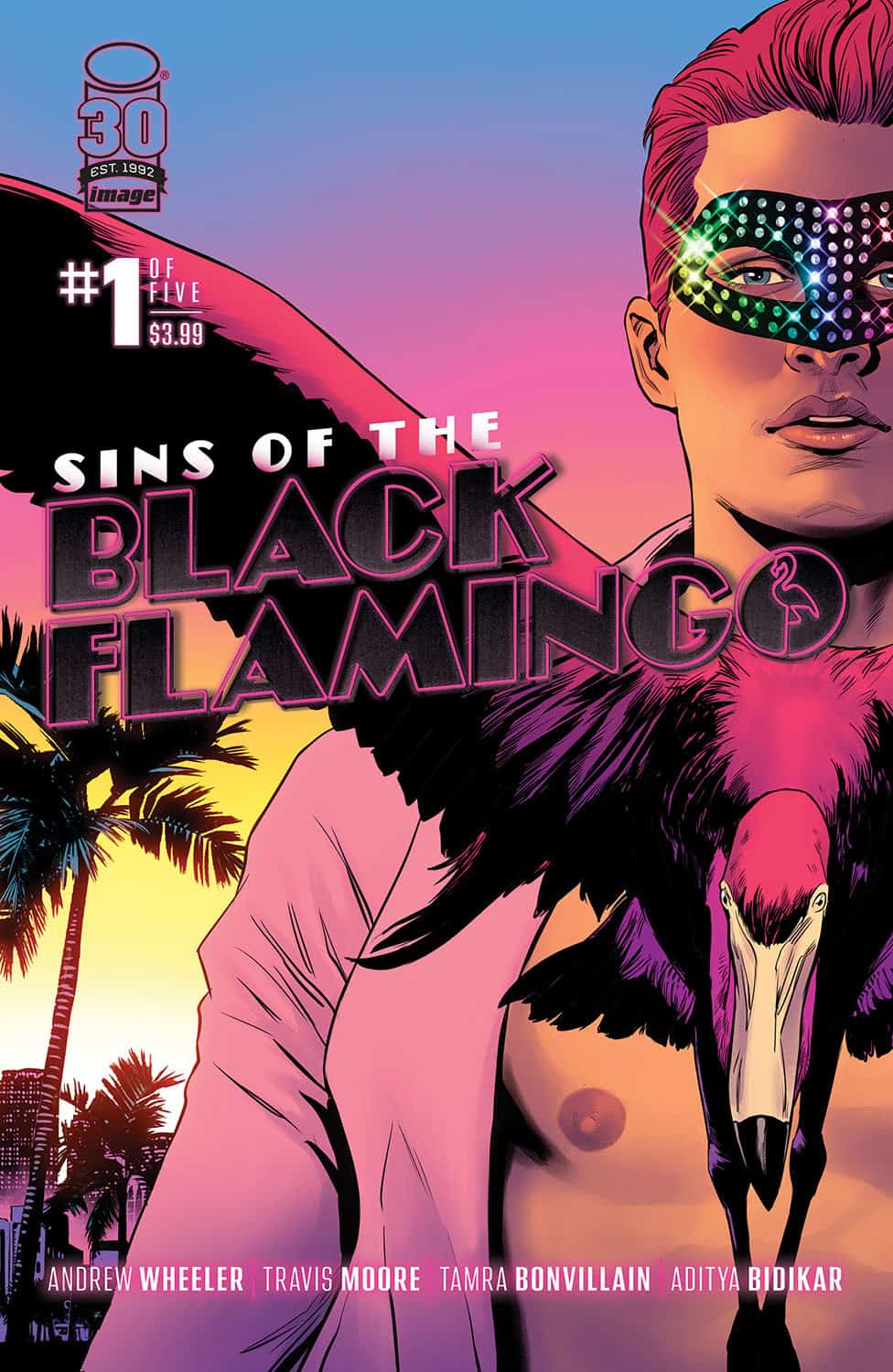 Sebastian Harlow is the Black Flamingo, a flamboyant and narcissistic thief who gets his kicks stealing mystic artifacts from the wealthy and corrupt of Miami’s occult underground. When his latest job leads him to his biggest score so far, the hedonistic outlaw discovers something he wasn’t looking for—something to believe in.

In Sins of the Black Flamingo #1, readers are introduced to the enigmatic gentleman thief Sebastian Harlow (the titular Black Flamingo), currently stealing back ancient artifacts from Floridian fascists. This description may be reminiscent of The Saint or perhaps Ocean’s Eleven, but writer Andrew Wheeler and artist Travis Moore offer their own original spin on the genre, adding in a heaping spoonful of the supernatural and a hefty dose of antifascism. The first issue is emotionally wide-ranging, gliding between comedy, sentimentality, and horror with the practiced grace and ease of an acrobat. 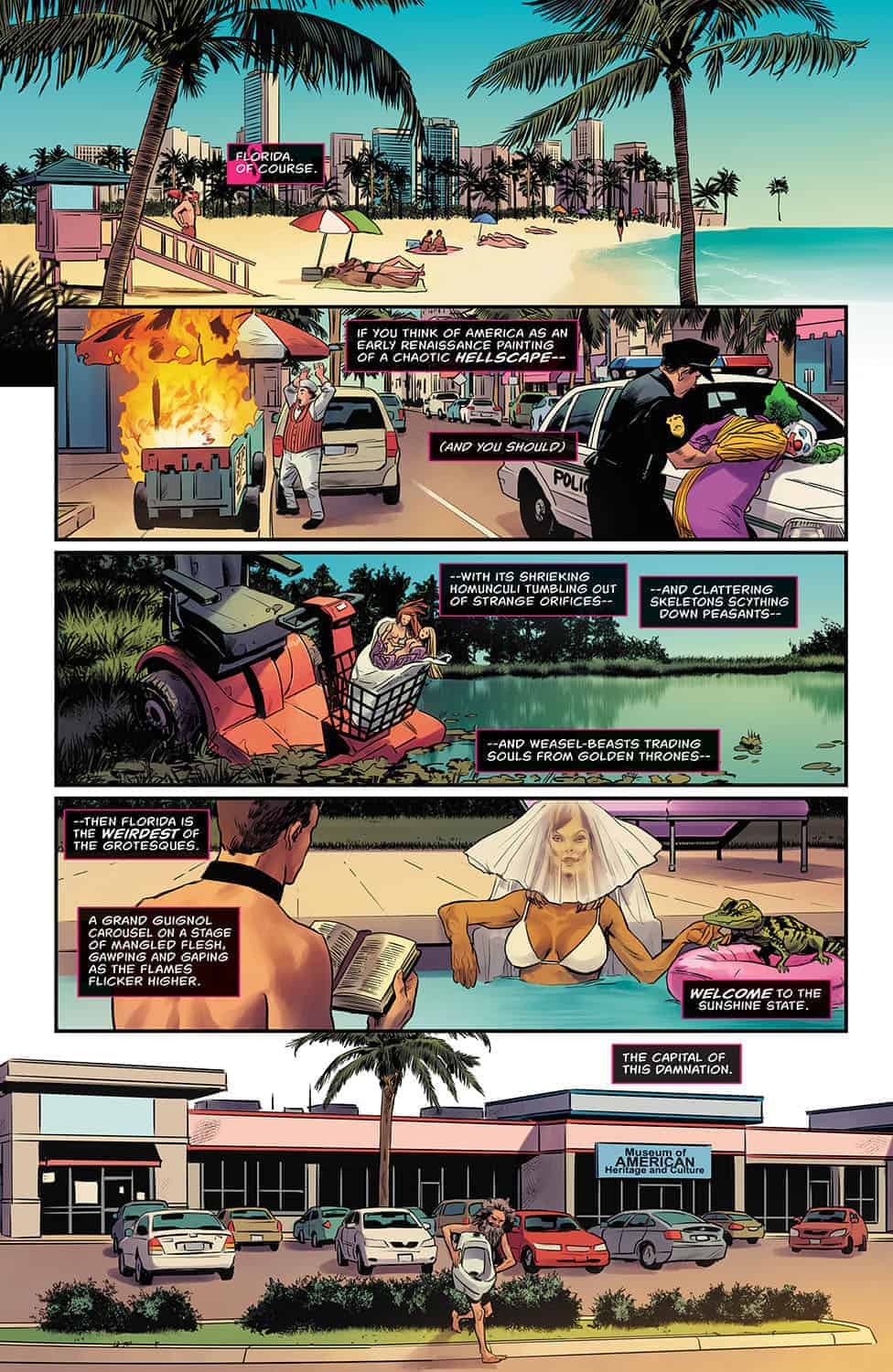 Moore’s artwork, colored by Tamra Bonvillain, makes this one of the best looking comic books on shelves right now. Visually speaking, this comic has a lot in common with the current Nightwing run (by Tom Taylor, Bruno Redondo, and Adriano Lucas): it’s visually polished, has bright and eye-grabbing colors, employs jaw-dropping page-turns, and objectifies its male protagonist whenever it has a chance. That’s where similarities end, however, because Sins of the Black Flamingo has a much sharper edge. 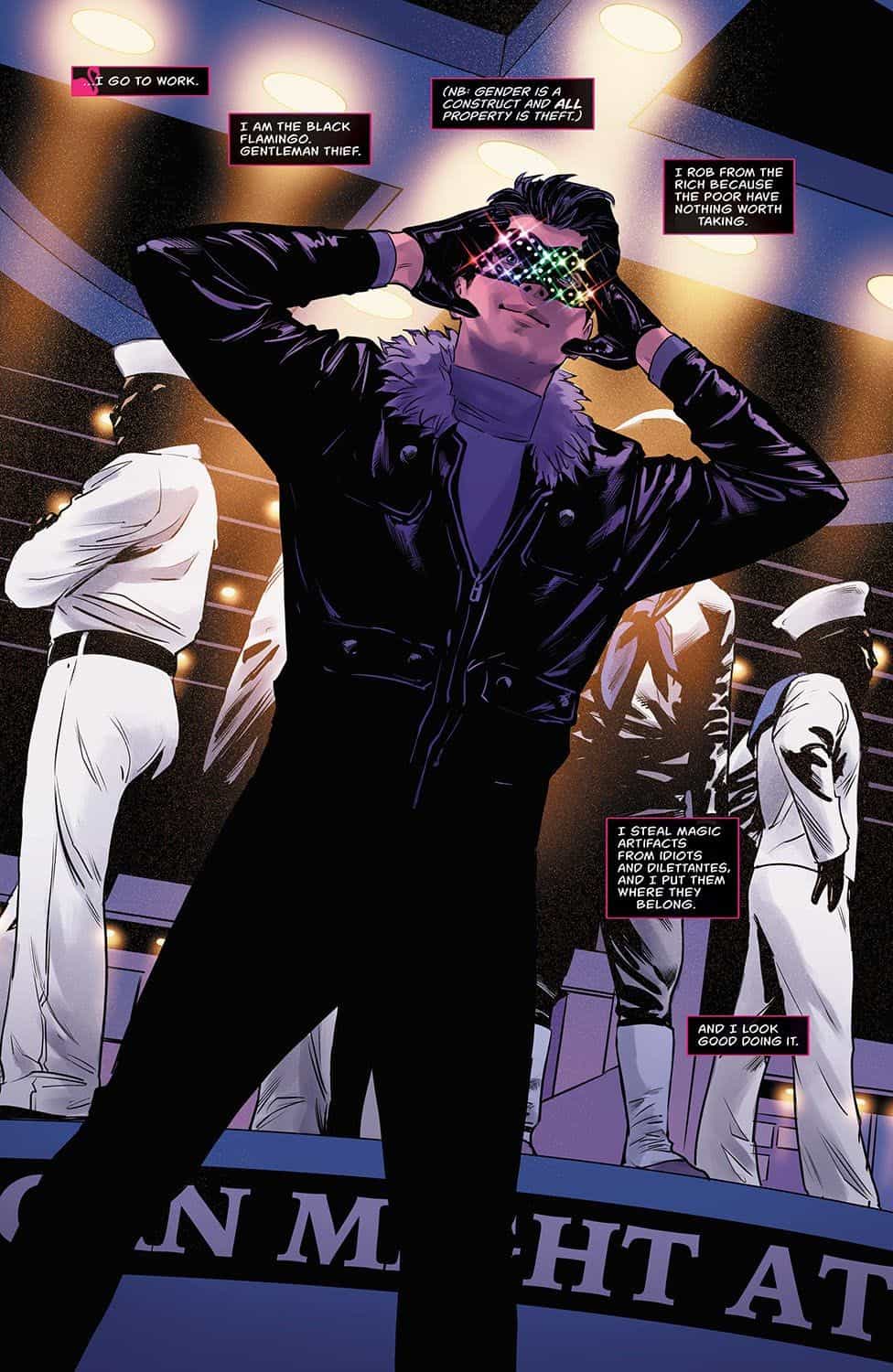 Like its antihero in his rainbowy rhinestone-encrusted domino mask, Sins of the Black Flamingo is far from subtle in its critiques of both the United States’s shameful past and equally sickening present. While they run the risk of being too blunt with statements like “gender is a construct and all property is theft,” it’s refreshingly crystal clear who this comic and its creators champion (oppressed people) and who isn’t welcome here (fascists and anyone who thinks fascists deserve to be heard out). Wheeler is quick to confront America’s hidden sins (like how the Allies re-incarcerated queer people they freed from concentration camps) and equally quick with humor (referencing the musical Cabaret in an otherwise grim moment). The humor makes these painful and uncomfortable topics almost bearable, rather than undermining the comic’s confrontations of them. It’s a difficult balance to pull off. And while its occult themes may not be to everyone’s tastes, this first issue so far teases a broader look at religion, oppression, and the myriad of ways the two intersect. I, for one, am excited to see where this miniseries will go next.

Sins of the Black Flamingo #1 is a stylish heist story with a heart of gold. With creators who understand what it means to “be gay; do crime,” this comic fights fascism & looks great doing it.

Sins of the Black Flamingo #1: The Saint Meets the Supernatural