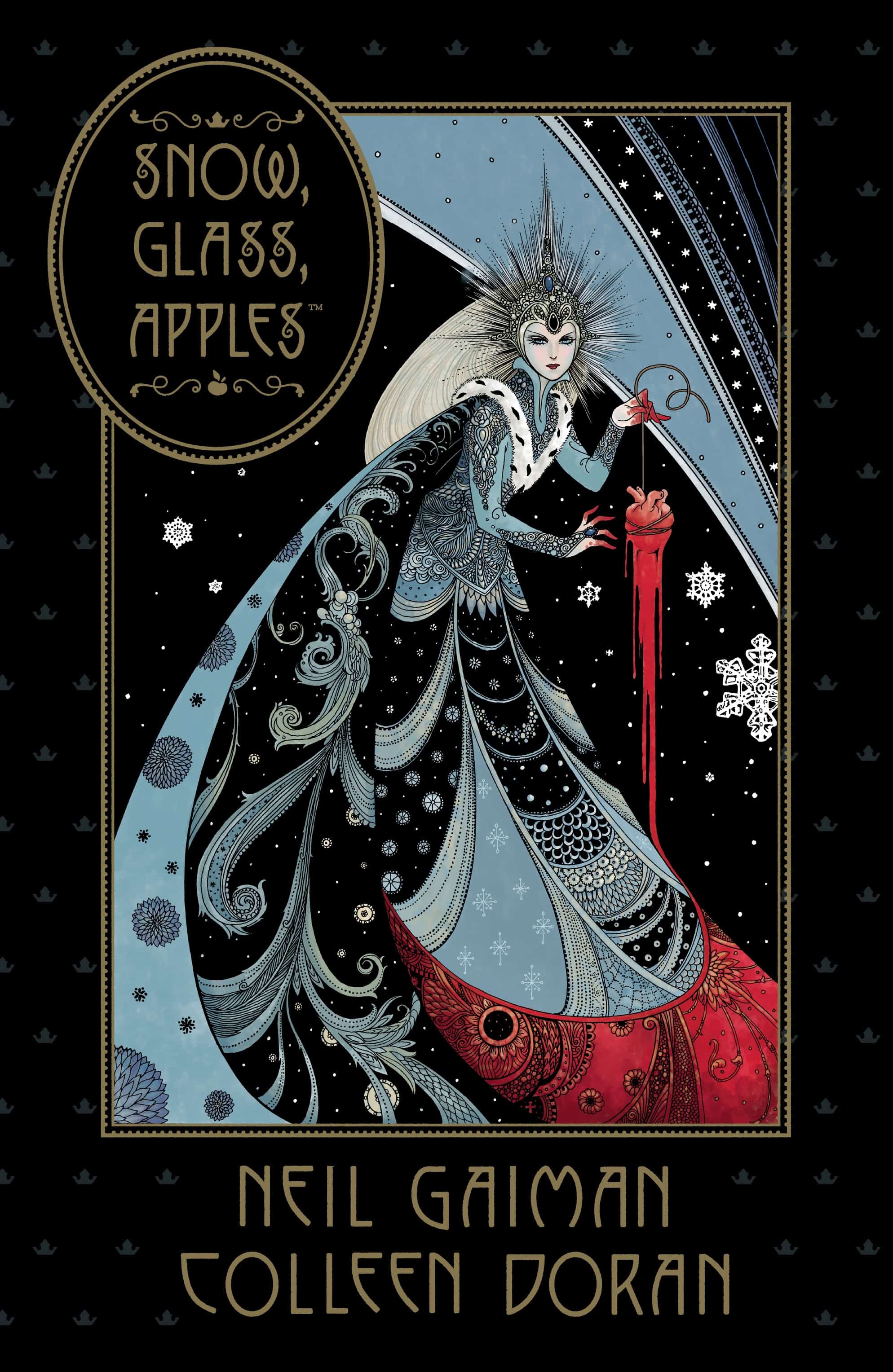 From bestselling writer Neil Gaiman comes this chilling fantasy retelling of the Snow White fairy tale, once again joined by award winning artist Colleen Doran. A not-so-evil queen is terrified of her monstrous stepdaughter, who hides a terrible secret. As the only one capable of combatting the darkness, she is determined to repel this creature and save her kingdom from a world where things don’t always end so happily ever after for everyone concerned. 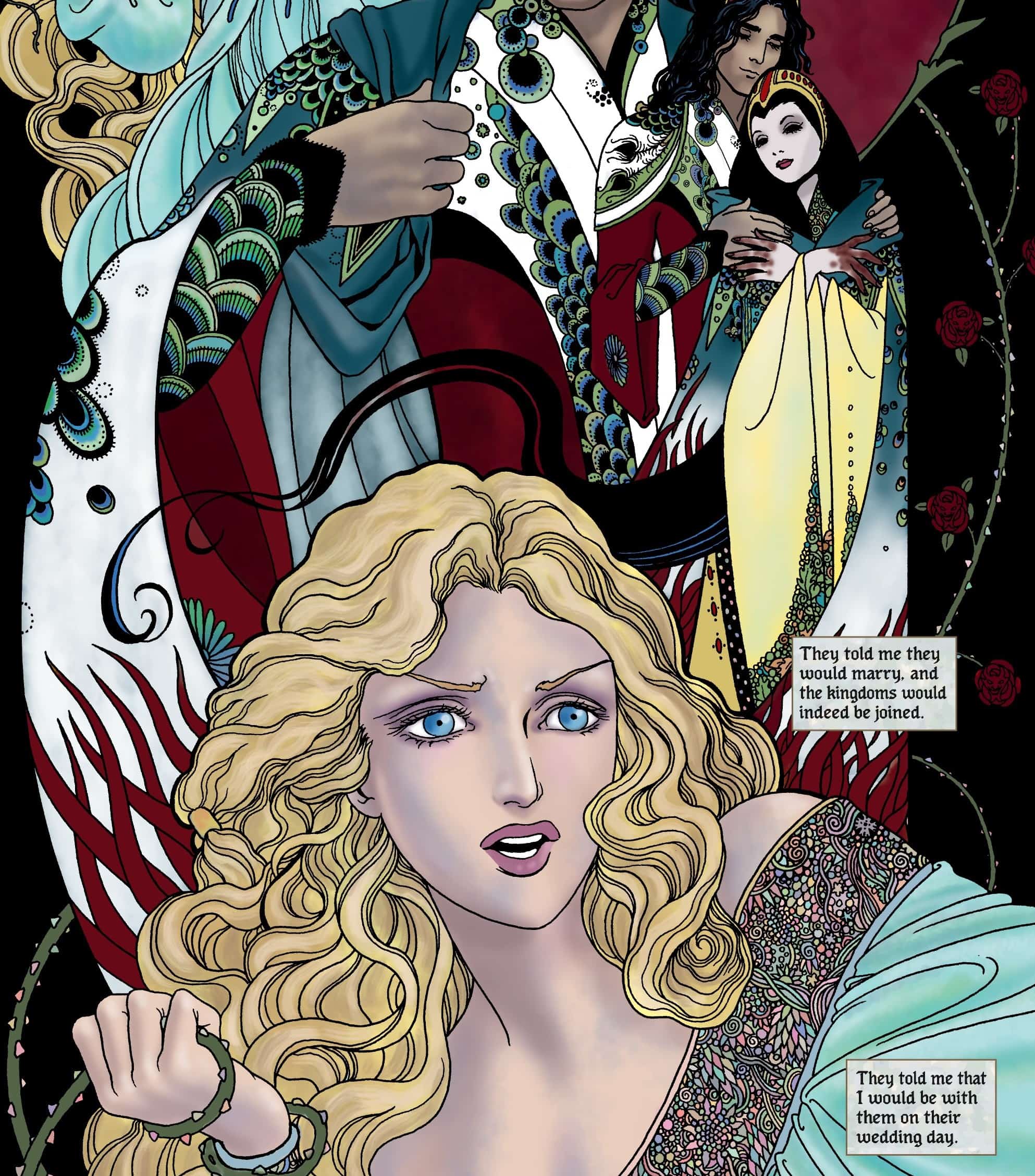 Story: Like all good fairy stories Snow, Glass, Apples has had several lives before this. Originally released in prose form in 1994 as a benefit book for the Comic Book Legal Defense Fund, it was reprinted in the anthology Love in Vein II, edited by Poppy Z. Brite in 1997 and a year later in Neil’s short story collection Smoke & Mirrors. Now the story receives the graphic novel adaptation treatment and in doing so joins many of his other short stories. And not only does he makes this accounting of the fable of Snow White much closer to Grimm than Disney in truly spectacular style, he also cleverly turns the familiar tale on its head and shows the perspective of the traditional villain in a new and refreshing light. 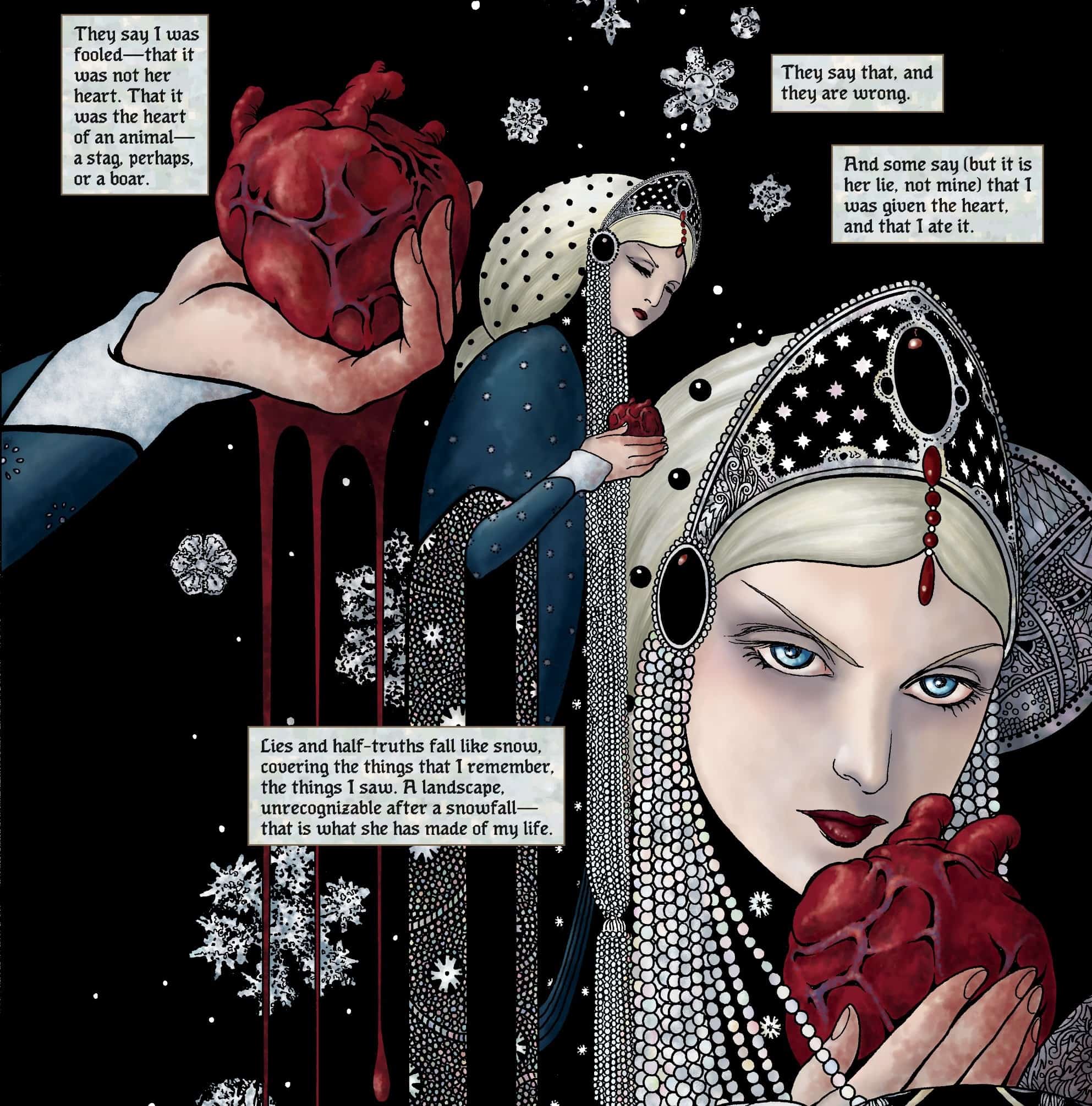 And he also ensures both female lead characters take centre stage, while creating some true empowerment for both, as well as making the male protagonists seem somewhat weaker and almost incidental to the power struggle, even somewhat deviant in nature. Prince-not-so-Charming becomes something of a necrophiliac, something implied in the original tale but omitted from the saccharine sweet cinematic version. And the King himself is portrayed as nothing more than a neglectful father and husband. Neil’s greatest achievement with this tale though is in enabling a believable reversal of the key roles. In fact I remember having read this years ago and I couldn’t believe it had never occurred to me before. When you take into account the description of Snow White in Grimm’s tale, it almost makes you wonder if this wasn’t the intent all along. Skin as white as snow? Eyes black as coal? Lips as red as blood? Hair as black as ebony? Someone call the Slayer!!! 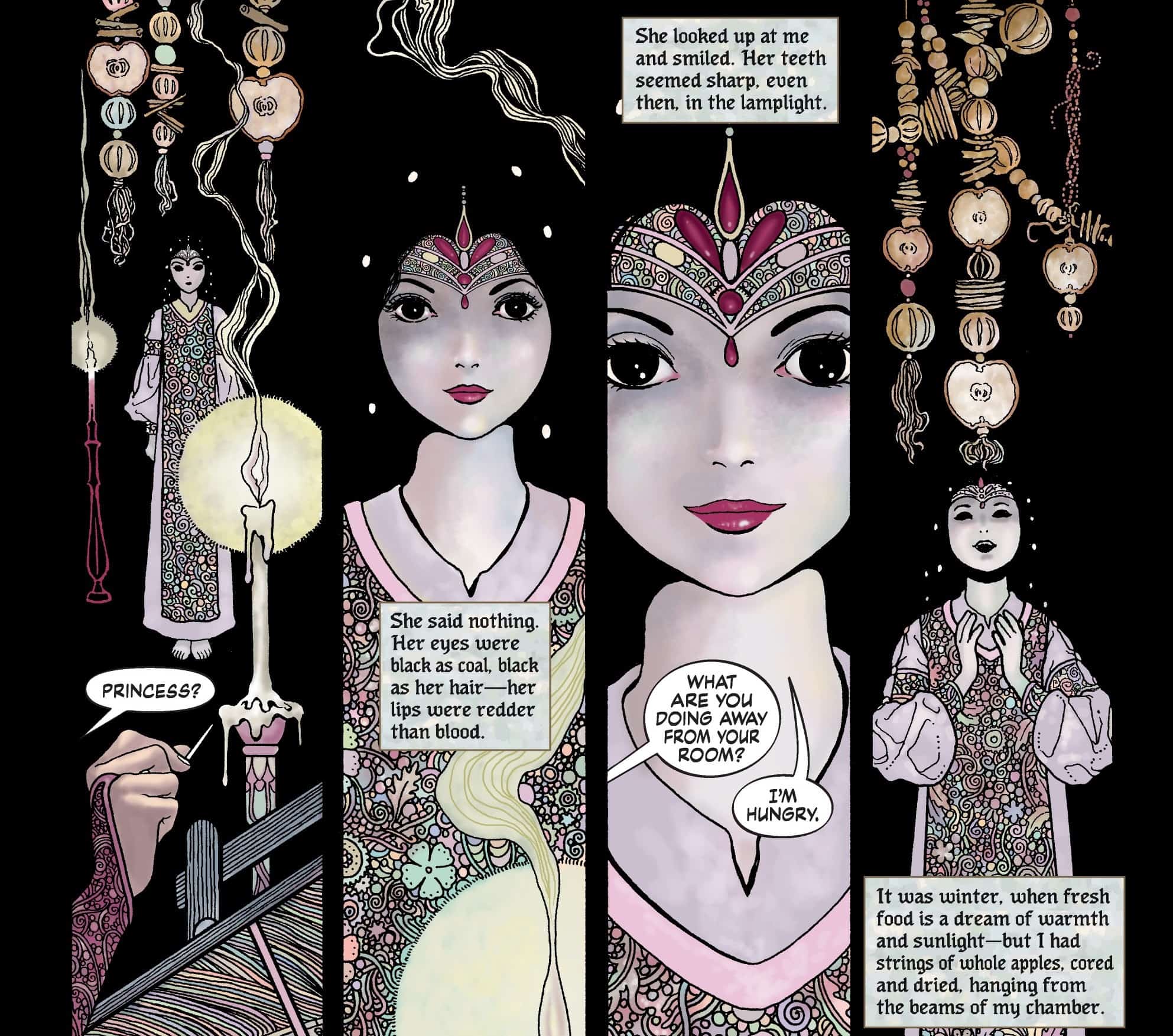 This kind of plot twist is nothing new for Neil Gaiman, especially in fairy stories, in which he is a skilled practitioner. From his own creation Stardust to his interpretations of such classics as Locks, the more faithful account of the old woman who encounters the three bears in their home. In these examples and also Troll Bridge, his version of the Three Billy Goats Gruff, there is a familiar refrain of the known becoming thrown in doubt. Another inverted fairy tale is his version of Sleeping Beauty called The Sleeper and the Spindle, much like this tale it mirrors the likes of Maleficent and Wicked and gives a new and enlightened perspective on the familiar and ensures fresh blood flows through the veins of the old narrative. Even in the twisting of the original story he still manages to ensure there is some ambiguity. The Queen makes reference of using her skills to arrange her meeting with the King and catch him, thus cementing her position in his life by use of glamours.

Art: And the Hugo, Bram Stoker, Locus, World Fantasy and Nebula Award-winning writers alternate take on the fairy tale deserves nothing but the best in contributory art. As such he is joined by fellow award winning writer and artist Colleen Doran. Artist on many titles such as Sandman and Troll Bridge for Neil, as well as Lucifer, Orbiter and many others, she is also bestselling creator of A Distant Soil. And here she gives her all, making each and every panel stand out in stunningly glorious style, drawing attention to the featured players with such painstakingly detailed additions as mandalas surrounding the heads of the protagonists and multi paned stained glass windows enhancing every dramatic scene. As well as the images of the Queen going about her business in the enchanted forest, enabling her to have a mystical aura as she flits between the trees 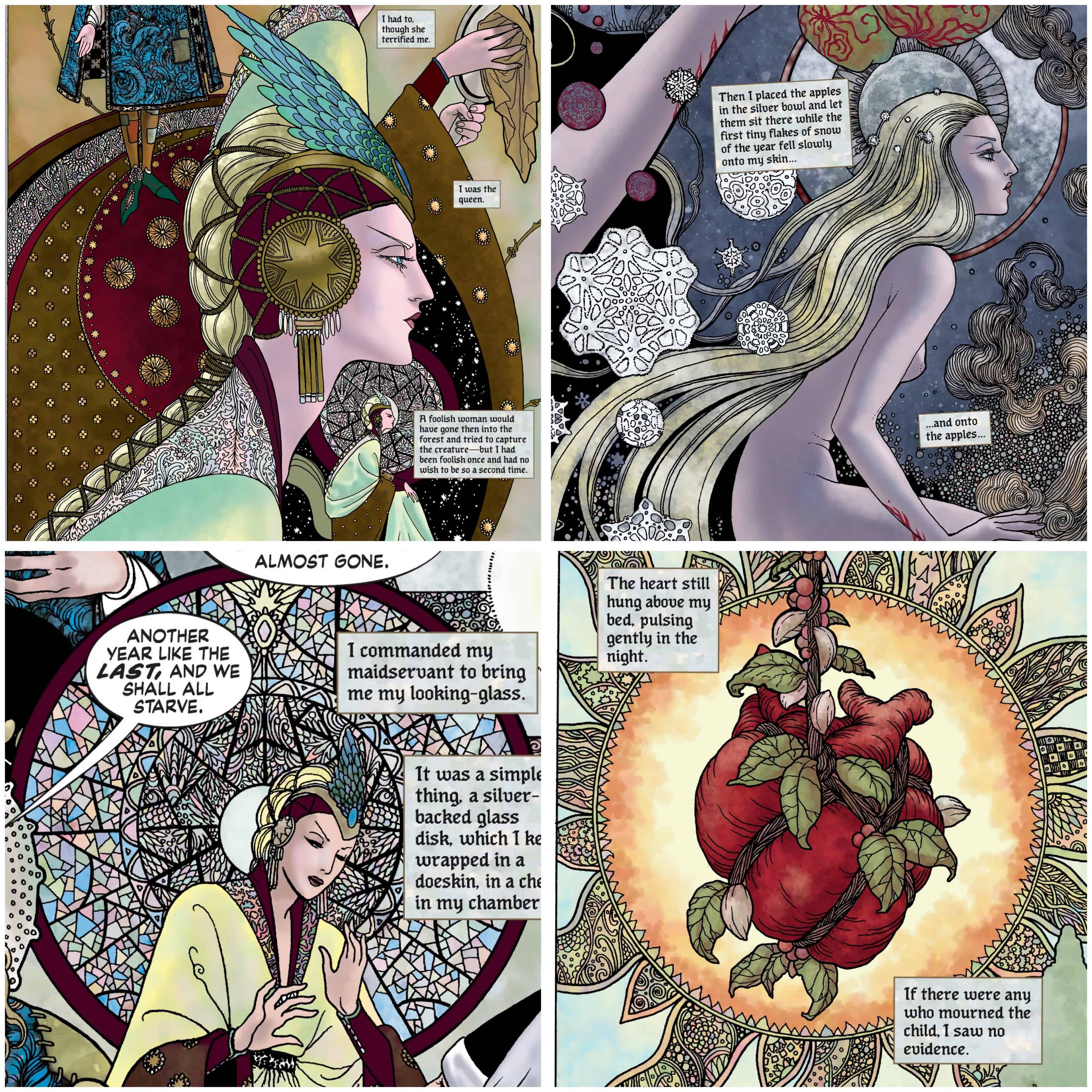 Colleen also breathes life into the fantasy world inhabited by the players in the saga with her distinctive and breathtaking eye for detail, ensuring she also populates the rich tapestry with stunning costumes, scenery decorations and pennants, as befitting the imagery of the time. Of particular interest to me are the two full page images of the main characters in all their glory. Giving the Queen some credible sense of honour and wisdom, as she confers with other wise women on how to deal with her nemesis. And the Queen is depicted as a regal and powerful resplendent image of a white witch. And also Snow White as the new villain of the piece with her ornate gown, brimming with darkness at the hem is a game changer in terms of characterisation. A clear indicator that there is more to her than we have known before. This allows the reader to see the truth of the matter even more clearly, as if the narrative could not convey it enough in words, clearly marking them as natural enemies. 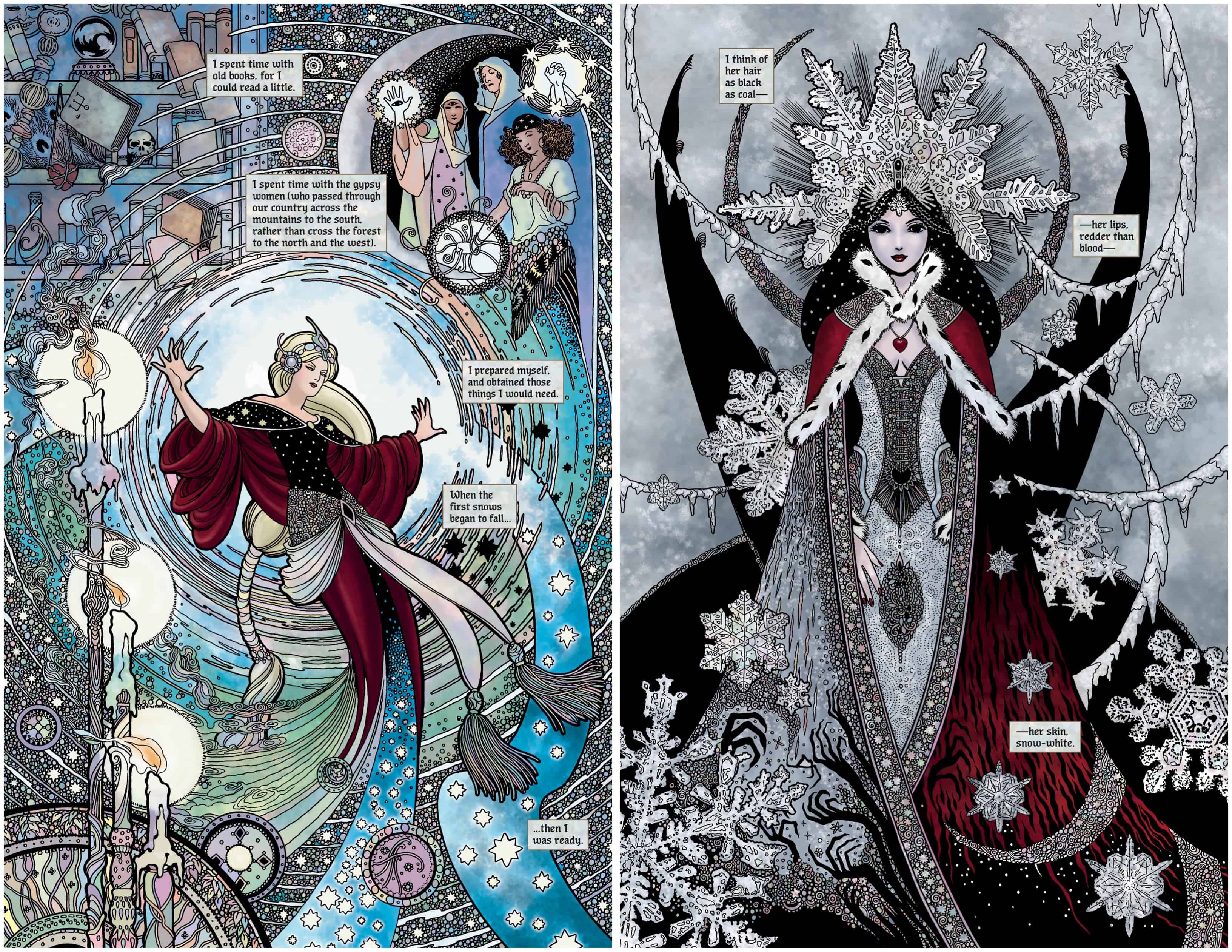 Colleen also has an enlightening post script that informs of not only her favourite scene within the whole text, but also signposts her work and the origin of it’s sources, as well as several sketches in progress for the finished book. All of these details inform on the thoughts of the creative talent and as such are something I can personally never get enough of, being a lover of all Directors Commentary on DVD’s. Any light shed on the process of the artist is always a boon as far as I’m concerned, as it allows the reader to see the magic behind the curtain and add layers to the experience. Which is definitely the case here, as all of the insights into the art in this book did indeed enrich an already enlightening and entertaining read. 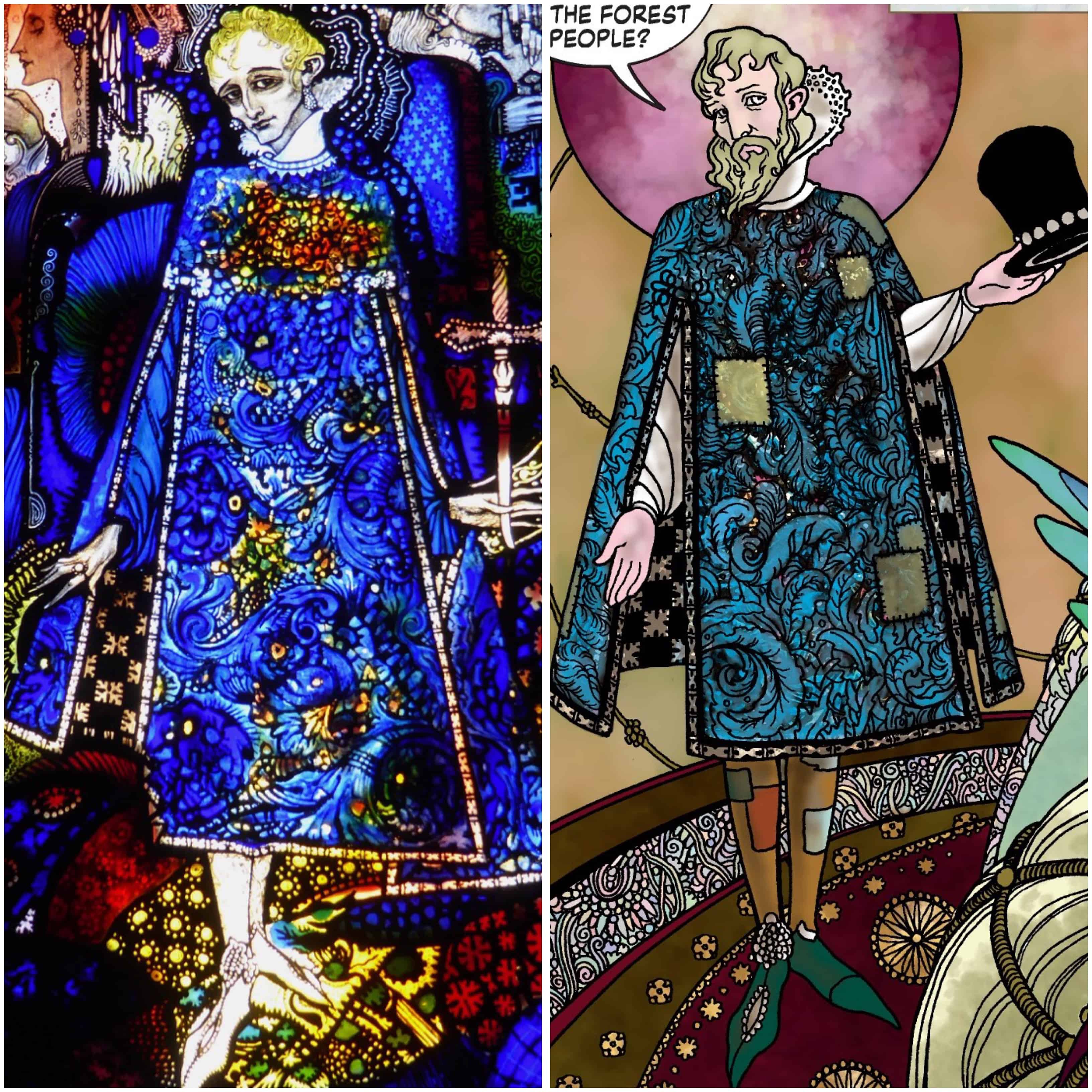 Utilising as inspiration the art of Harry Clarke added wholly to the enjoyment of the art. As seen here inspiration was taken from The Song of the Mad Prince and The Mad Mulrannies for the Fair Lord. These themes were incorporated with the encouragement of Neil, a fellow fan of the illustrator. And also using the image of Faust and Mephistopheles on their steeds from the 1925 special edition of Faust by Goethe in the embroidery of the Queen. 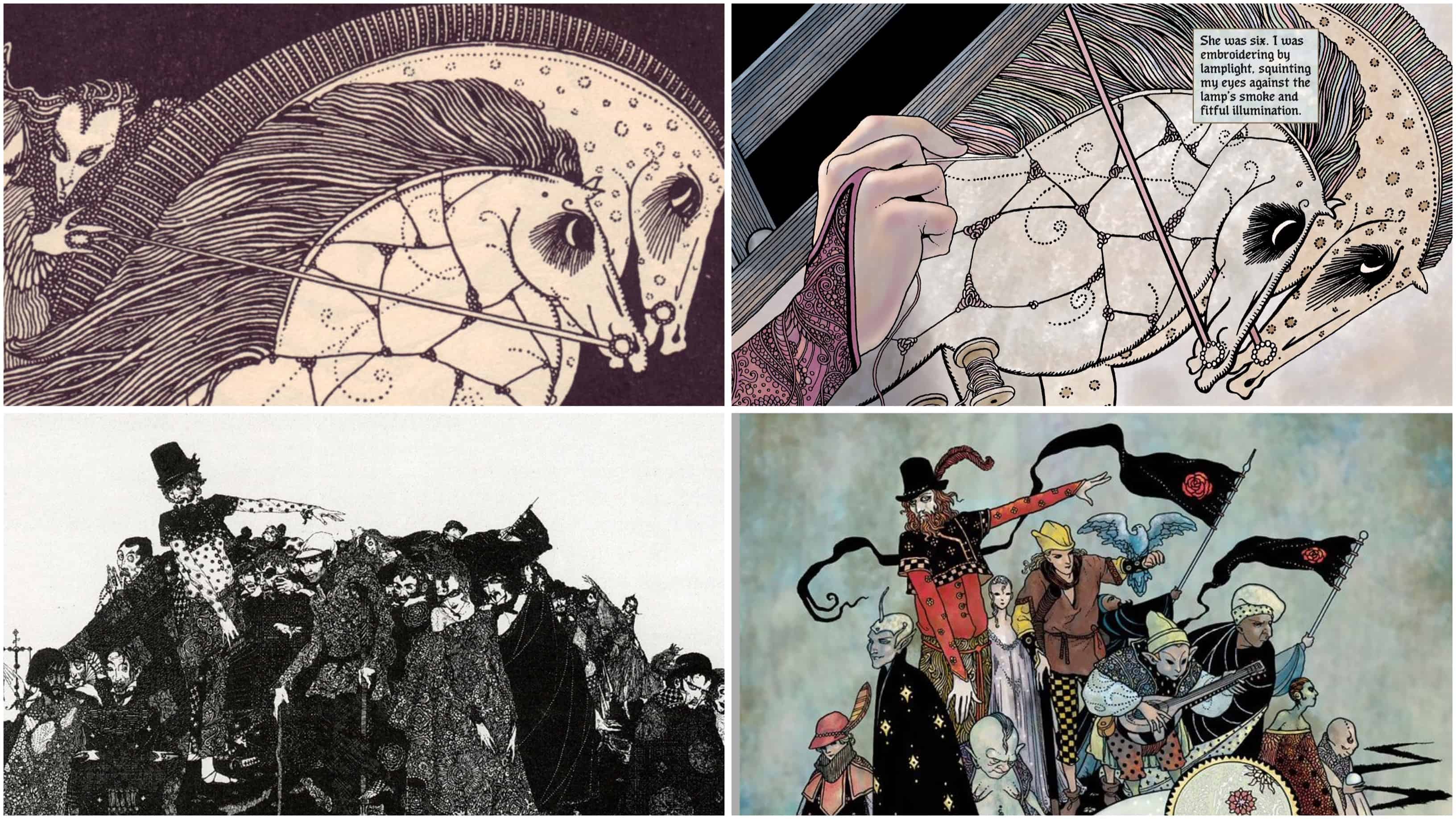 All in all this is a great addition to the Gaiman Library, with some amazingly eye-catching and detailed art, which offers a compelling, dark alternate journey through previously familiar territory. And for more of Neil’s other novels and their ‘new lives’ why not check out this COMIC ADAPTATIONS article by yours truly, that gives some deeper background on their origins and progression into the comic and graphic novel form. Go on, you know you want to…

A bewitching experience and an enlightened alternate look at a well known and well worn story.