REVIEW: Spirits of Vengeance #5 (Faith in the Fallen) 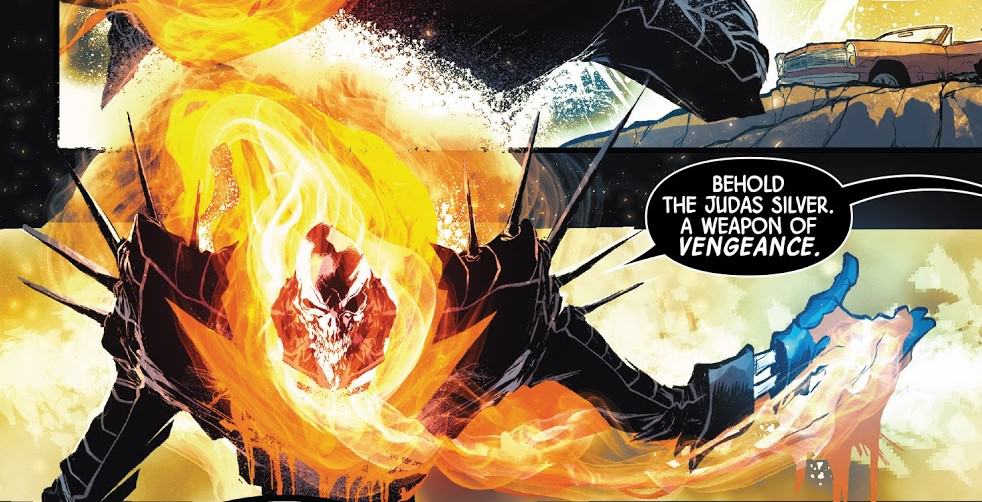 The covenant has begun. Demons are ready to break the accord. Can the Spirits of Vengeance stop the heavenly bloodbath? Get ready for one hell of a ride in the epic conclusion to War at the Gates of Hell! 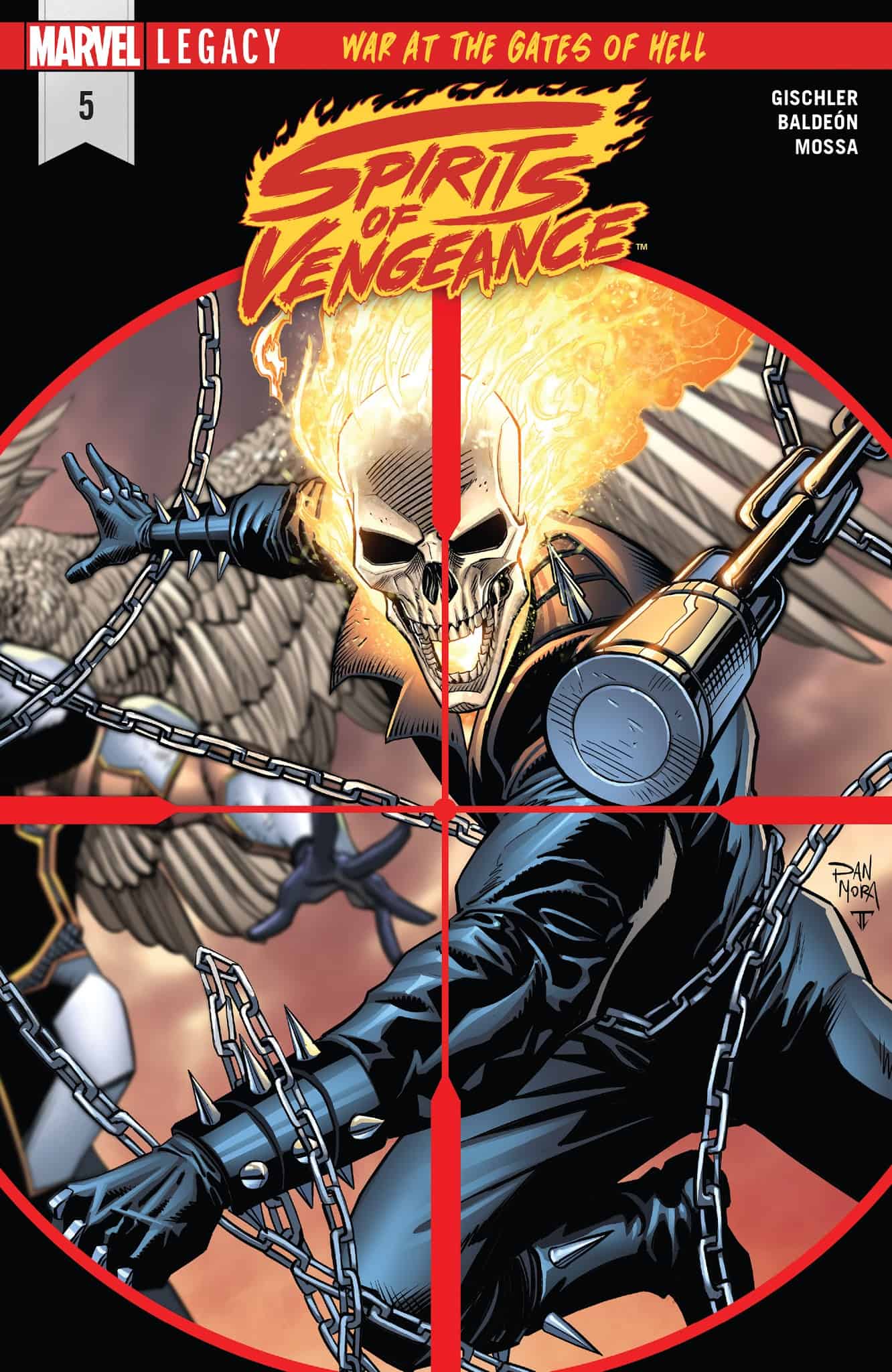 In a war meant to last an eternity, evil begins to gain the upper hand. In exchange for power, Necrodamus has recovered the cursed silver of Judas, the sole means of truly killing angels, giving dark forces a means to end the conflict once and for all.

Satan himself can’t help but revel in assured victory. As the summit begins the archangel Michael has become wary. Rumors of back-alley deals and shady pacts have made their way to Heaven’s sacred gates. Knowing this moment will forever seal the fate of humanity, the Spirits of Vengeance race to intervene. 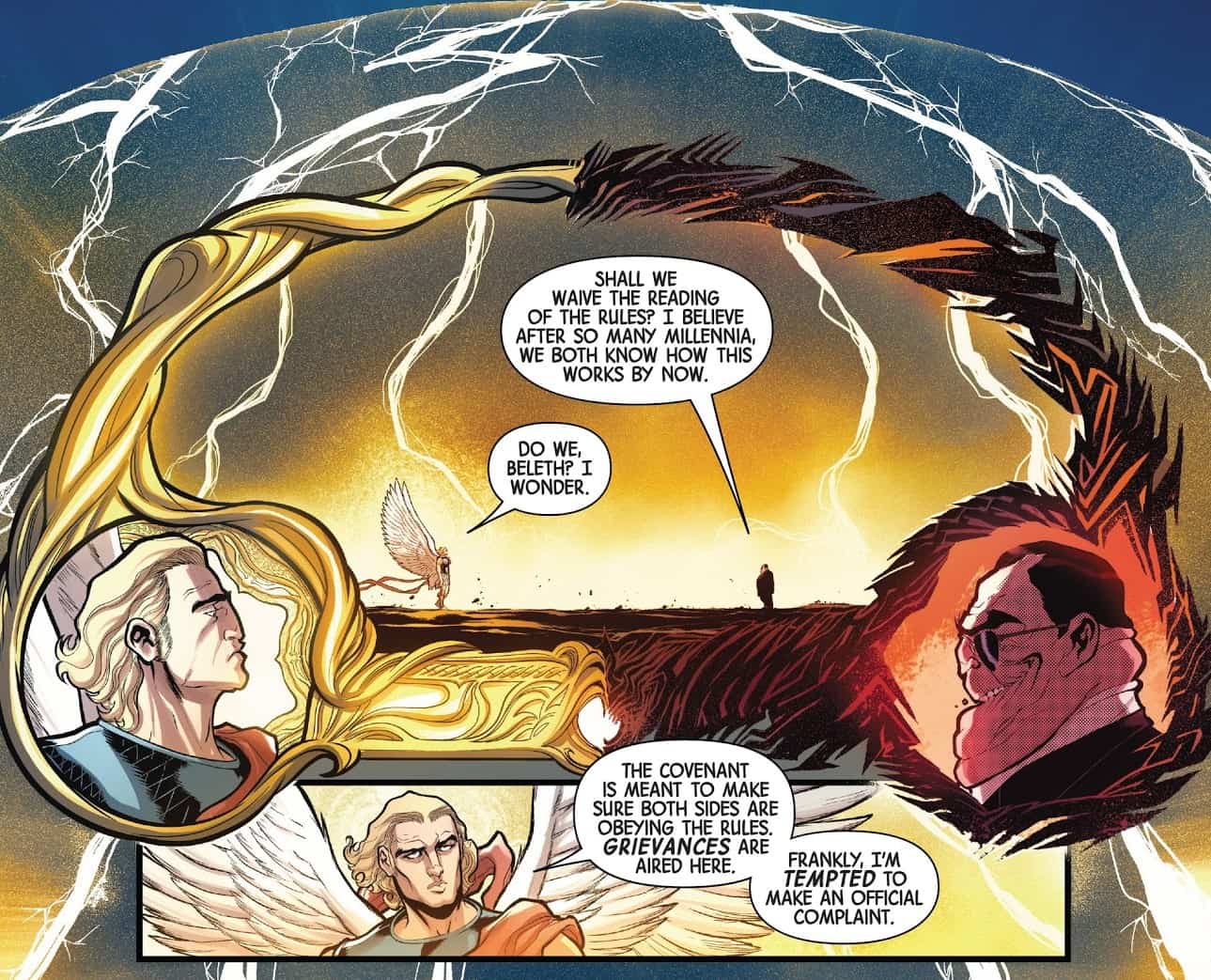 The Ghost Rider spurs onward to face Razan once more as the two become locked in lethal combat. Brother and Sister duo Daimon and Satana face hell’s legion in an effort to hold back the onslaught from reaching the covenant. Though the demonic siblings are powerful, the endless blitz threatens to overwhelm them. Only in their final moments does aid reveal itself. For the pair of hellions, rescue arrives from the least likely of allies. 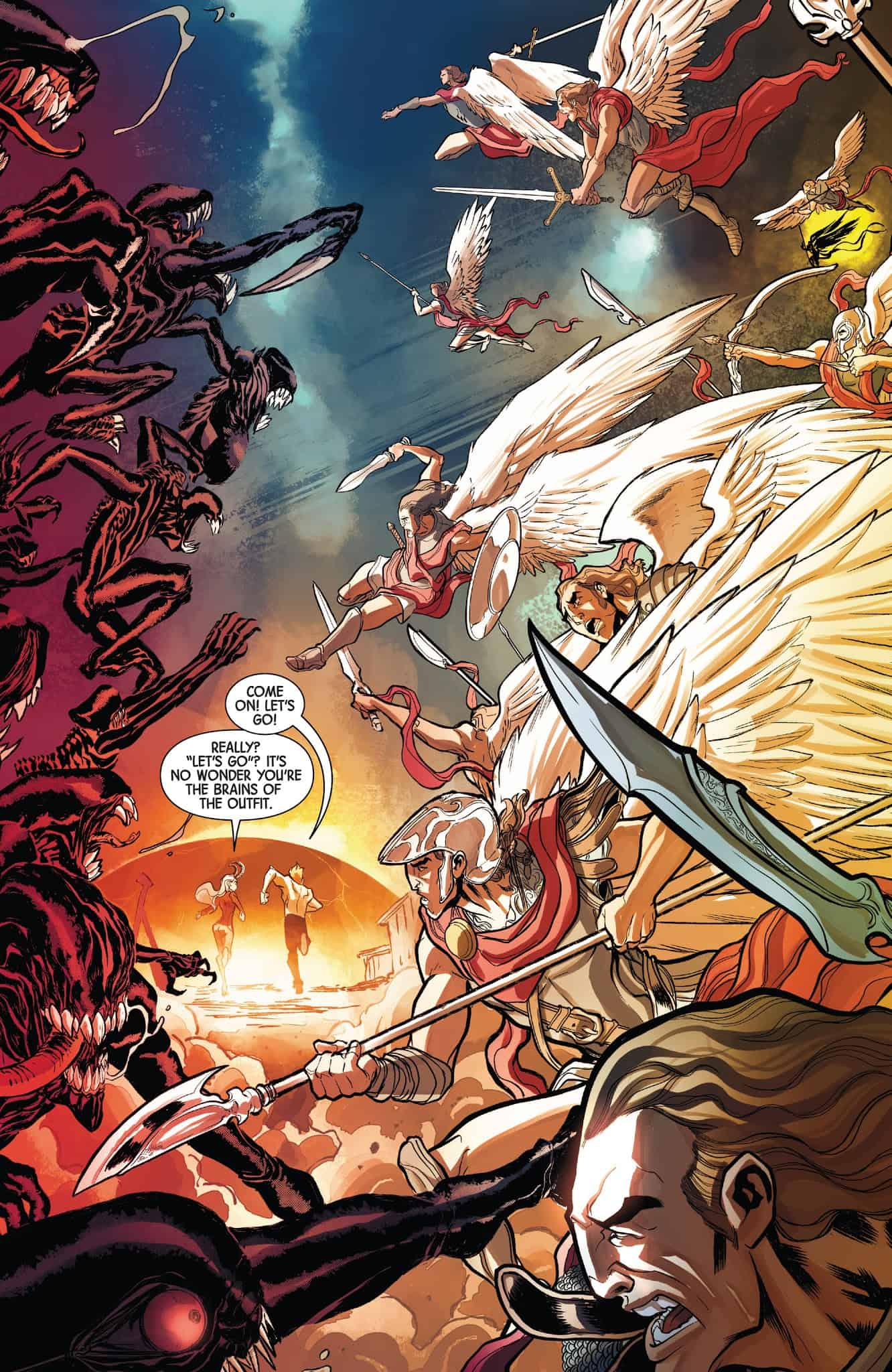 The Spirit of Vengeance has full control of the Ghost Rider. Blade intercedes knowing that Johnny must prevent Necrodamus from killing Michael and confronts the half-goddess. Necrodamus fires his unholy weapon, a missile comprised of deadly silver. His triumph quickly shifts to defeat as the Ghost Rider takes the blow, preventing the assassination and more importantly, the loss of heaven forever. 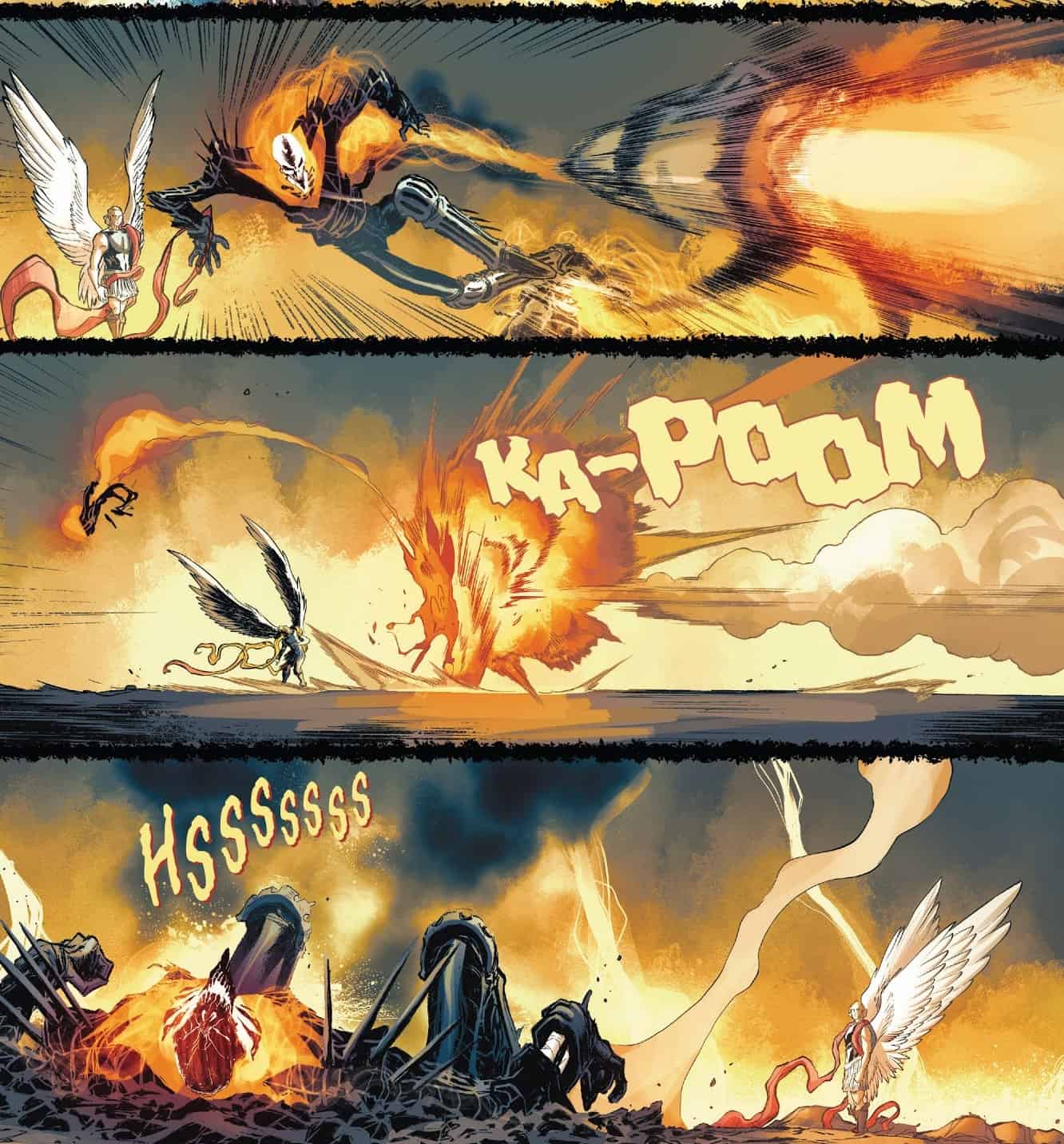 The four-question how events could have spun so far out of control. Michael offers that Heaven never had any intention of winning and in fact, it must be humanity on its own accord to achieve their salvation. Otherwise, victory or defeat would be meaningless. 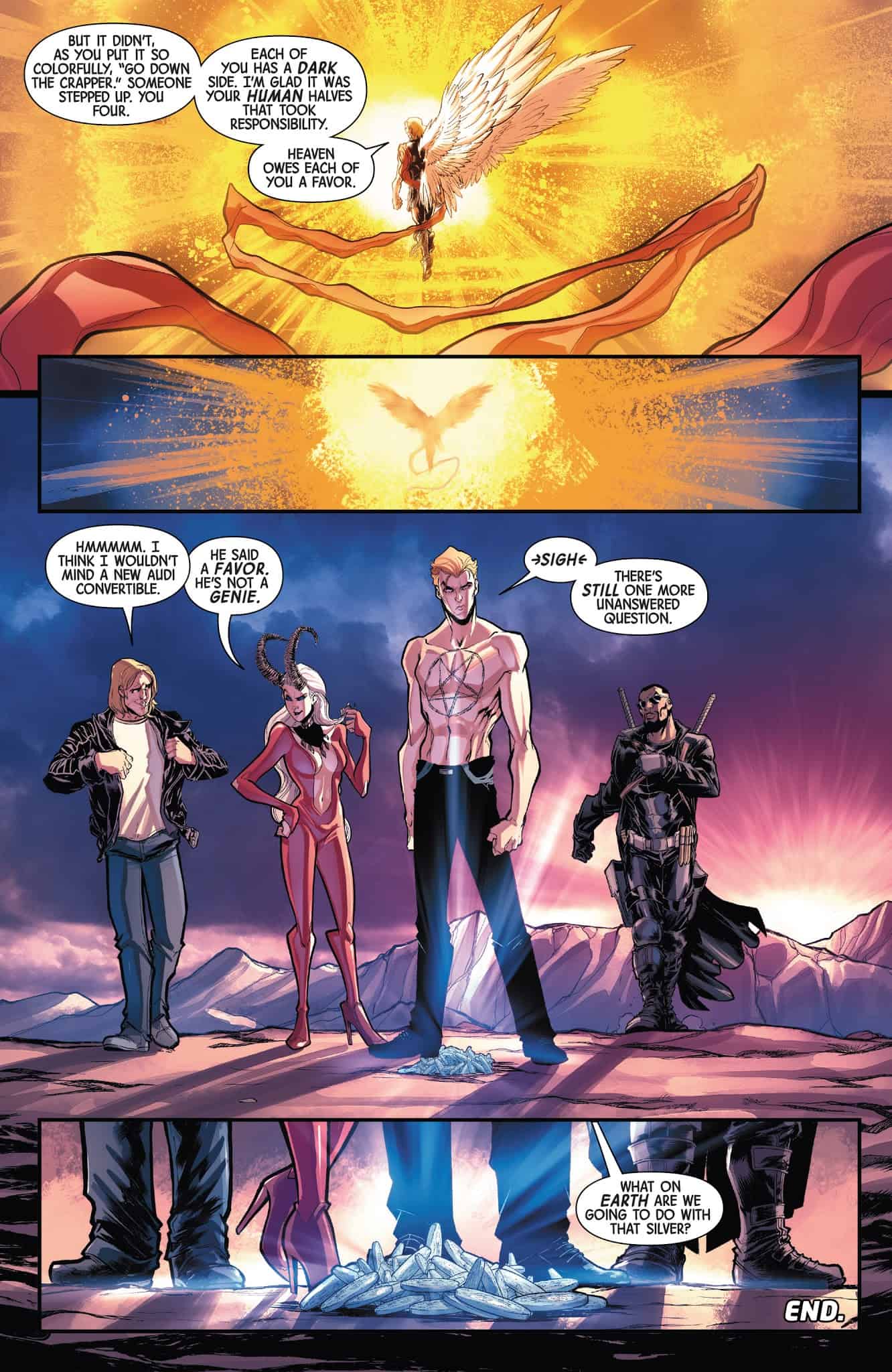 First and foremost, I’m truly sad that Spirits of Vengeance ends with issue #5 and was set in the framework of a miniseries. SOV has all the right elements to be an enduring standalone title. Its unique genre caters to a fanbase which has little comparable alternatives within Marvel’s current portfolio. Fans can take some consolation that the final page reveals the return of Ghost Rider as a solo series with a date to be determined. SOV did achieve one goal at least for me in the assurance that I will at least try the solo title whereas before SOV I would have likely skipped it. The “team atmosphere” of Ghost Rider, Daimon Hellstrom, Satana, and Blade really hit the mark on so many levels and I gained a true appreciation for some sorely underutilized characters. I worry that element won’t carry over to the upcoming solo series, but only time will tell.

The creative team of SOV should truly be proud of their accomplishment. The 5 issue mini is a solid, well-told story with lots of interesting new concepts born from ancient mythos. Tieing current events to classic gospel elements propelled the highly engaging tale to a successful ending. Victor Gishler’s spins a new twist on the head of old chronicles that yields a conclusion that makes perfect sense. It doesn’t get too deep or encumbered in vapid expression. Gishler leaves off with one sole dangler regarding the fate of Juda’s silver, and at the same time cleverly manages to leave the door ajar ever so slightly, allowing for a potential reunion or continuation of the storyline.

It’s also crucial to recognize the success of the Gishler’s efforts and the overall series would not have been possible without David Baldeon’s art. Throughout all 5 issues, Baldeon never once flounders. Each installment has numerous moments that provide incredible visuals. Issue #5 likely takes the prize on the final page as the archangel offers his final words while climbing skyward, truly matching Gishler’s exceptional story and ending the series on a high note.

Final Thought: In the fifth and final issue, Spirits of Vengeance attains sheer victory and is likely among the short list of Marvel’s better series of the past year. Or two. Maybe three…