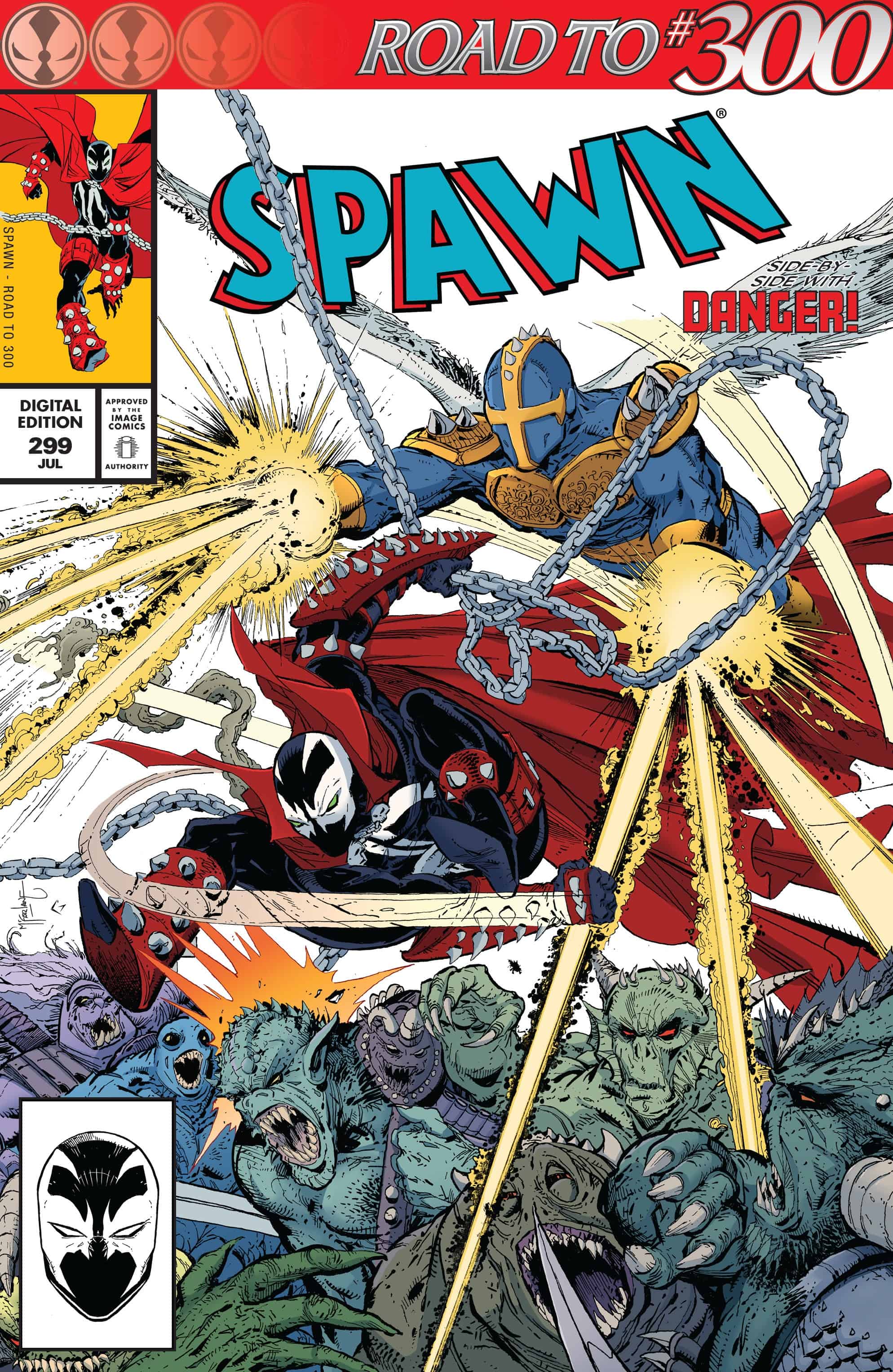 “WAR TO 300,” Part Two LAST ISSUE BEFORE SPAWN 300! Witness the debut of TODD McFARLANE’s newest creation—The Rapture! Heaven’s answer to the mythic Four Horsemen of the Apocalypse, these eternal warriors are tasked with eliminating the plague called humanity from the face of the Earth. The WAR TO 300 rages! Next month, new allegiances will form, new enemies will rise, and history will be made!

Spawn #299 is here, which means the only thing left to do after this issue is to make history! Though understandably a lead-in story to the upcoming record breaking issues #300 & 301, this issue proves to be a worthwhile read with some fairly substantial developments in the ongoing war between Heaven and Hell. 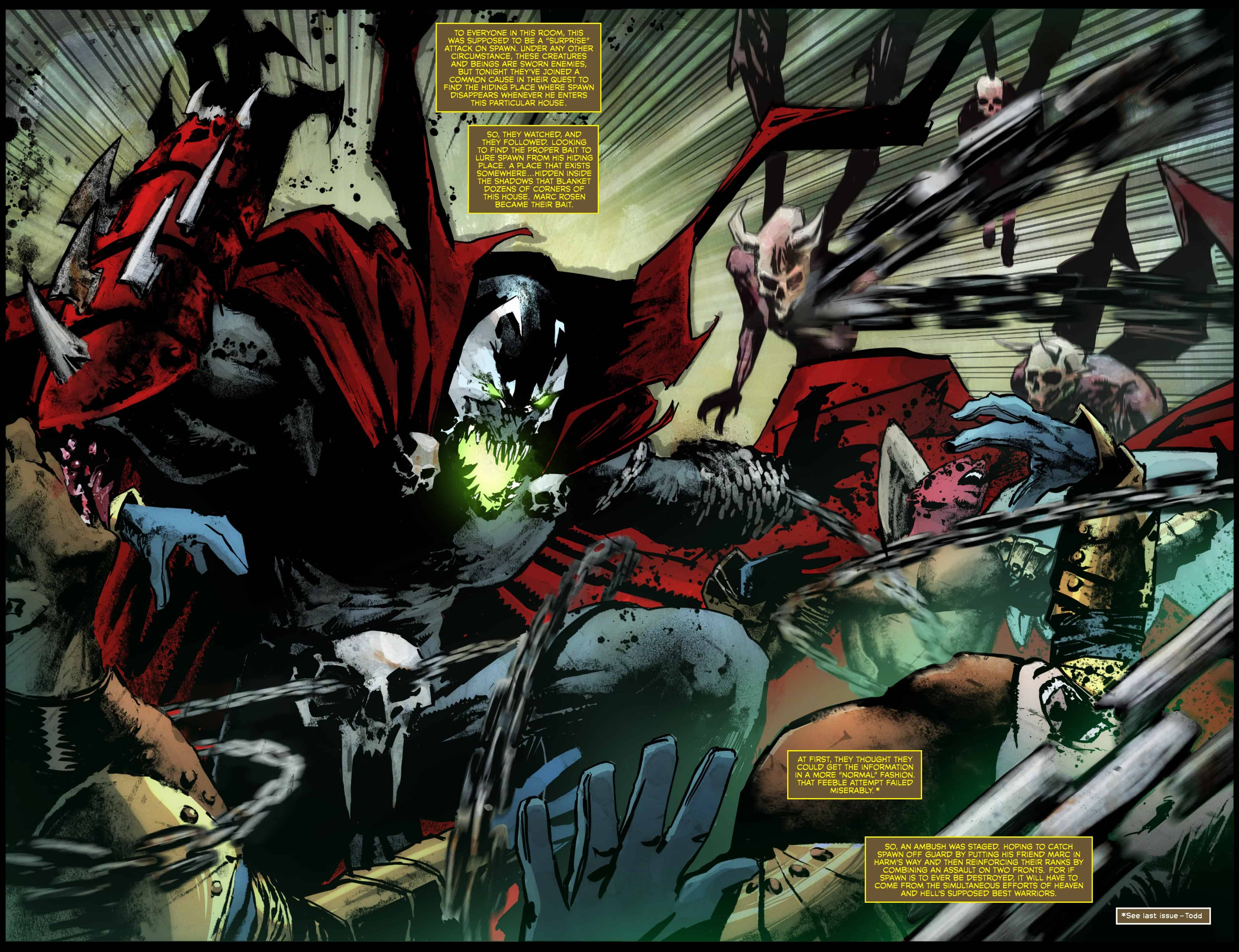 Let’s face it, issue #299 was always destined to be overshadowed by the highly anticipated issues #300 and 301.  Just like Action and ‘Tec #999 will always be an afterthought to the wildly popular issue #1000 for both series. However, where Spawn #299 differs is in the importance of the story itself. McFarlane and company are building an epic story that continues to expand with each new issue, and luckily, this one keeps that momentum up.

For this book to be a success, there are essentially two critical components that had to be met. The first is maintaining the artistic quality. Alexander nails this with apparent ease. With some truly vivid colors from FCO Plascencia, the art continues to shine on every single panel. There are a handful of instances with less than spectacular backgrounds and panel layouts, but overall, it’s yet another incredible entry into this creative team’s increasingly iconic run.

The next component is a story that feels worthwhile. Oftentimes the downfall to lead-in issues like this is that they simply feel useless. That isn’t the case with Spawn #299. Although I am sure you will be able to jump right into #300 and understand what is happening due to the conciseness of the story being told (it’s now boiled down to fairly basic terms of good vs. evil), there are developments that will undoubtedly have true meaning as the story continues. As the forces of Heaven and Hell approach readiness for war, Spawn makes a move that he explains will either aid him…or kill him. Taking the Redeemer into the shadows in what appears to be an attempt to recruit him to his side is the exact type of shock factor this issue needed. While it is unfortunate that we won’t find out what actually happened in the darkness until next issue, I believe we can look towards the cover of Spawn #299 to find answers. An unlikely team up could be in our future!

There is a surprising amount of brutal fighting in this issue, which is thoroughly welcome. The war between Heaven and Hell has reached its boiling point and we can finally see Spawn’s plan in full motion. This is a book that is packed full of action, horror and mystery, setting up what already feels like an instant classic for the long-running series.

Who actually killed Wanda? What exactly does Spawn have planned with the Redeemer? And how will the war between Heaven and Hell on Earth come to an end? These are the questions you should be asking yourself as we go into next month’s issue!

"Spawn #299" strikes an engaging balance between action, horror and mystery to feel like a truly worthwhile experience before the historic issue #300 releases!