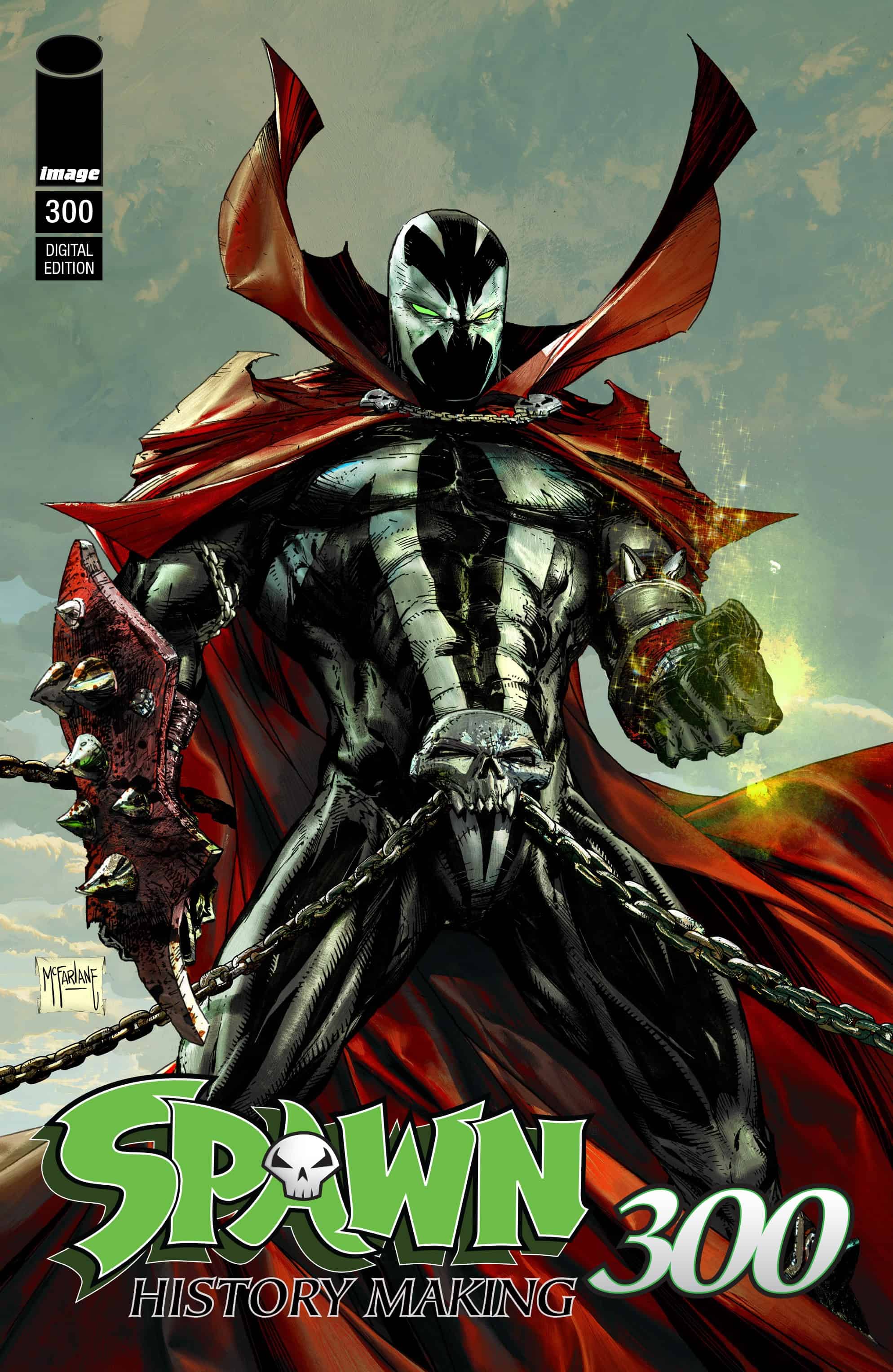 The historical Spawn #300 has arrived, and with it, a cacophony of dark horror and badass action unlike anything the long-running series has ever seen before.

Before we delve into the pure awesomeness that is Spawn #300, I’d like to emphasize the importance of this issue. There aren’t many creator-owned series that have reached this magnitude of both enduring popularity and relevance. With issue #300, Spawn will officially tie the record for the longest running creator-owned series, and the record-breaking issue #301 is soon to follow. This milestone stands on the shoulders of many other great achievements for the series though, all of which stand as a testament to the sheer brilliance of not just creator Todd McFarlane, but all of those involved.

When Spawn #1 released in 1992, it took the comics world by storm, but this is a character destined for more. After selling well over one million copies with his debut issue and holding consistent sales for years, we would then see a cult favorite live-action film titled “Spawn” released in 1997. HBO even produced three seasons of “Spawn: The Animated Series” which won an Emmy in 1999 for Outstanding Animation Program. Fast forward to today, and Spawn is about to break the record for the longest creator-owned comic series ever, has another feature film in development from horror extraordinaire Blumhouse Productions (set to star Jamie Foxx as Spawn and Jeremy Renner as Detective Twitch), and there are even rumors of another animated series.

This is a franchise that continues to transcend what was thought possible from an indie comic.

These achievements haven’t just been handed over arbitrarily though, they’ve been earned on a foundation of consistently great storytelling. Todd McFarlane devised an original and engaging character that continues to be incredibly enjoyable to explore still to this day. Spawn #300 is a perfect representation of these elements. With each of the stories given that weave an intricate tale, born of both depravity and retribution, we are given a book that is impossible to put down. 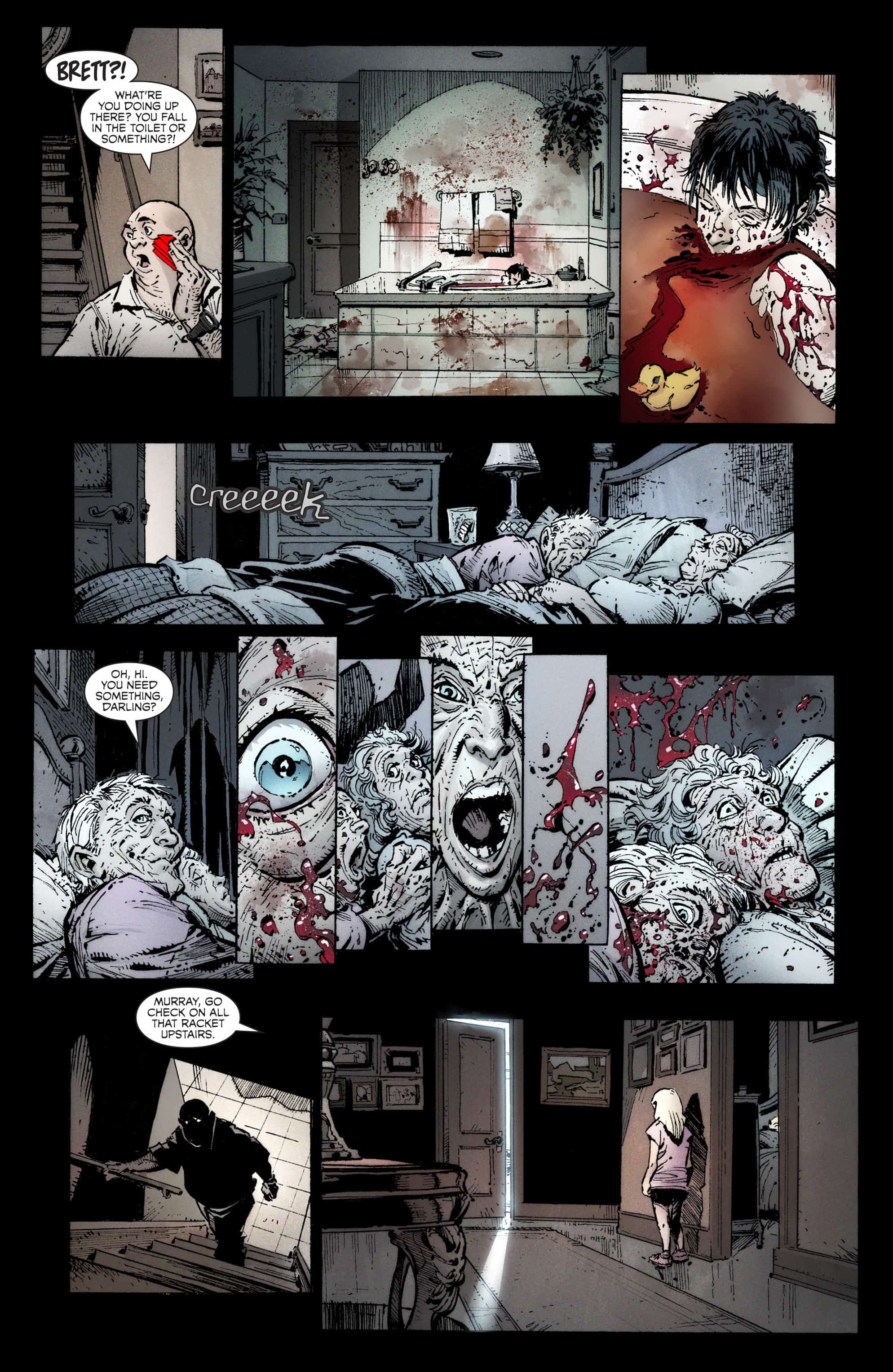 We start with the return of the classic counter that was once used to determine Spawn’s necroplasm viability, though it’s used differently now, it sets the stage for a beautifully told collection of stories that feel determined to break boundaries, but never forget who Spawn really is. Al’s recent plans finally come to fruition (though not entirely as he expected), we learn who killed Wanda so long ago, are introduced to both the Reaper and She-Spawn and end with a grim cliffhanger that longtime fans will be clamoring over. With all of these revelations, the issue is also remarkably accessible. Those looking to jump into the fray can feel welcome with this book due in part to a unique structure from the creative team. It both advances the plot and sets up a whole new future that is sure to excite fans.

With landmark issues like this, the execution can often get lost in all the excitement and celebration of its release. That isn’t the case in Spawn #300. It feels fully realized and more importantly, focused on what it hopes to accomplish, which is setting up the series for another 300 issues of success. It’s both pivotal and fresh, which is certainly welcome. 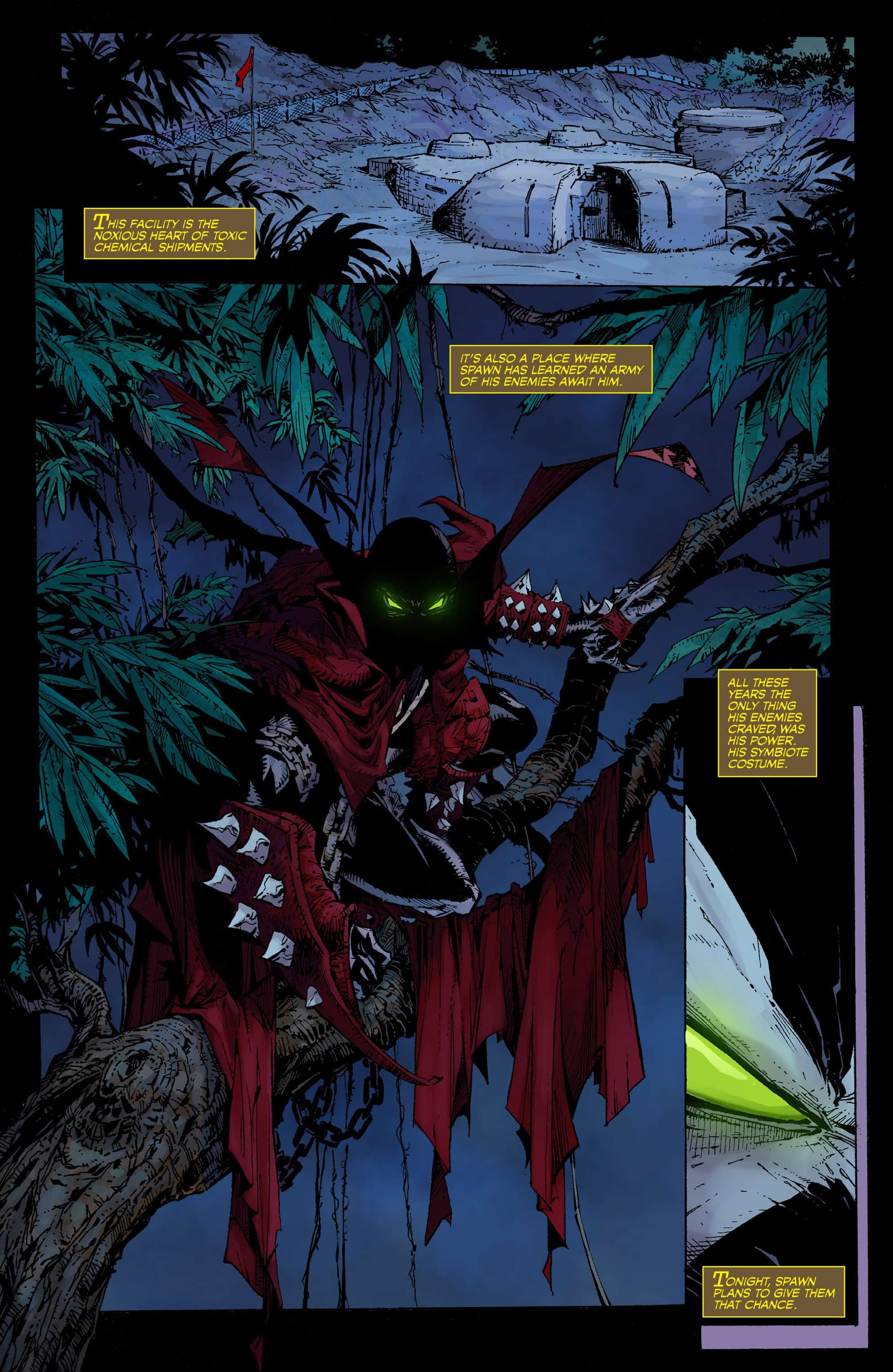 The myriad of talented artists make for an impressive powerhouse of visuals in Spawn #300, which is fortunate given the franchise is often known for vivid imagery. Everything from a wildly violent and nostalgic clash with the Violator to the powerful introduction of She-Spawn is a pure visual spectacle worthy of being framed and placed on the wall. The care for this world and the characters that inhabit it is apparent and that greatly contributes to the overall success of the issue.

While not every single panel is complete perfection, it’s certainly close. There aren’t any awkward mismatches between artists and their stories, which helps both the pacing and the overall aesthetic. There are noticeable differences, but they all feel apart of this world and contribute something special in their own right. It’s easy to see that this team fundamentally understands what Spawn brings to the table because they are playing to all of his strengths in just the right way, each approaching a side of the character or the events unfolding in a way that is strikingly engaging. 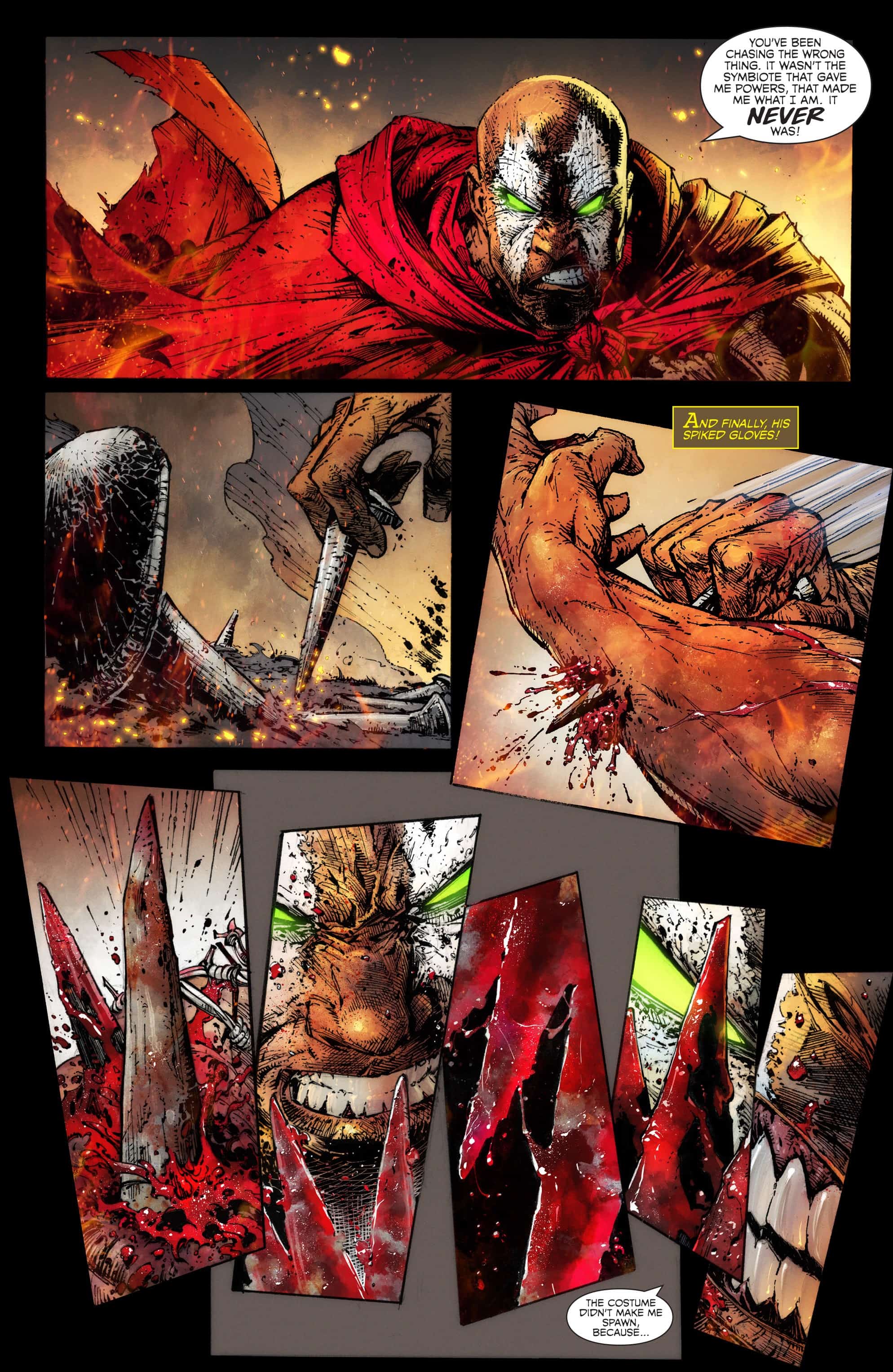 Spawn #300 represents a milestone for the series that few other comics will ever live to see, and just one read through will be all the evidence you need as to how it’s reached this remarkable accomplishment. It’s badass, beautifully horrific and tons of fun. It’s a can’t miss issue for longtime fans, those interested in Spawn and anyone who wants to just have a damn good time.

Don’t miss the historic Spawn #300 or it’s collection of gorgeous variant covers for that matter. Go buy them all. Enjoy them. Then prepare for a whole new chapter for Al Simmons’ Spawn, because if it’s anything like the last 299 issues, it’s going to be a hell of an experience. 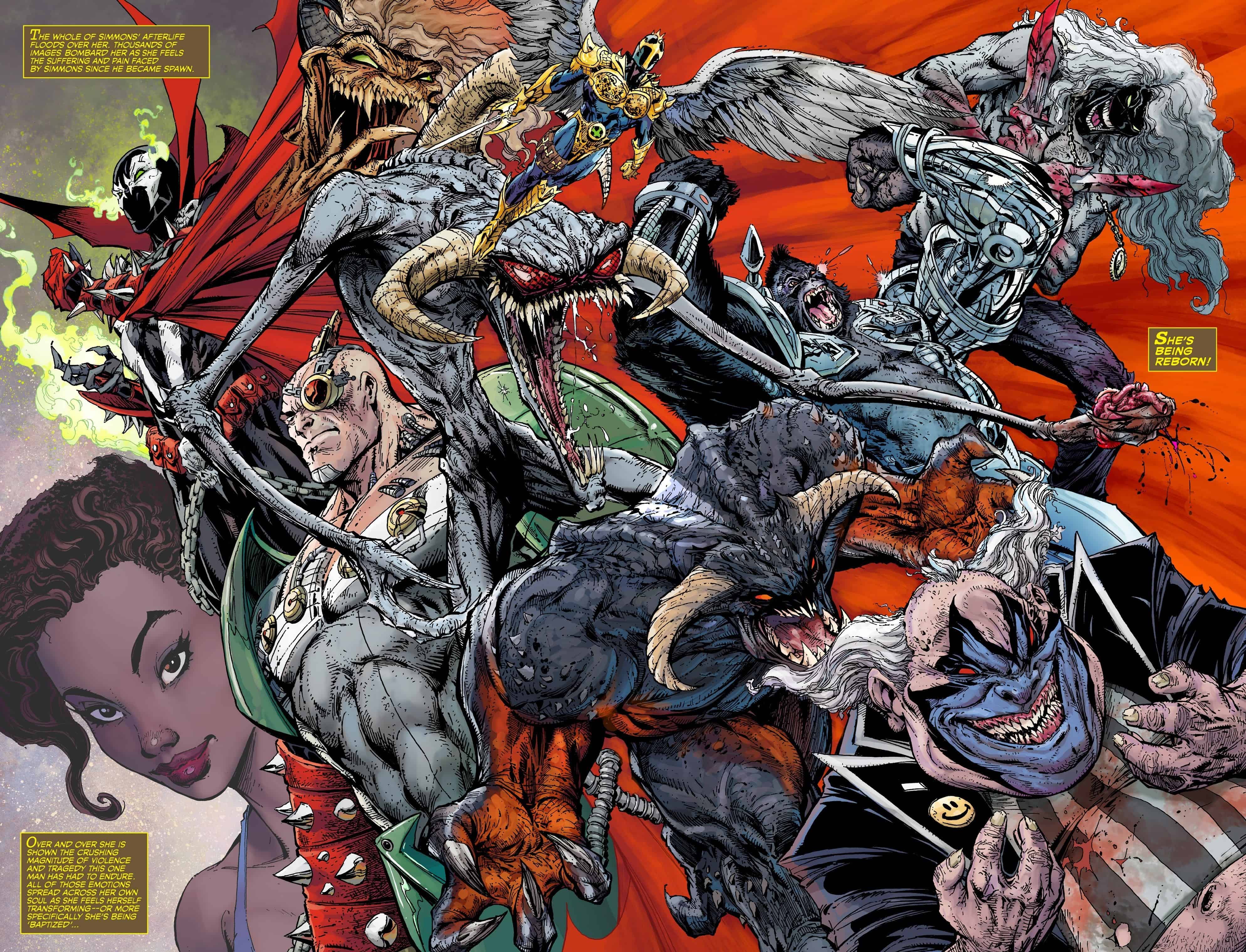 Spawn #300 represents a milestone for the series that few other comics will ever live to see, and just one read through will be all the evidence you need as to how it's reached this remarkable accomplishment.