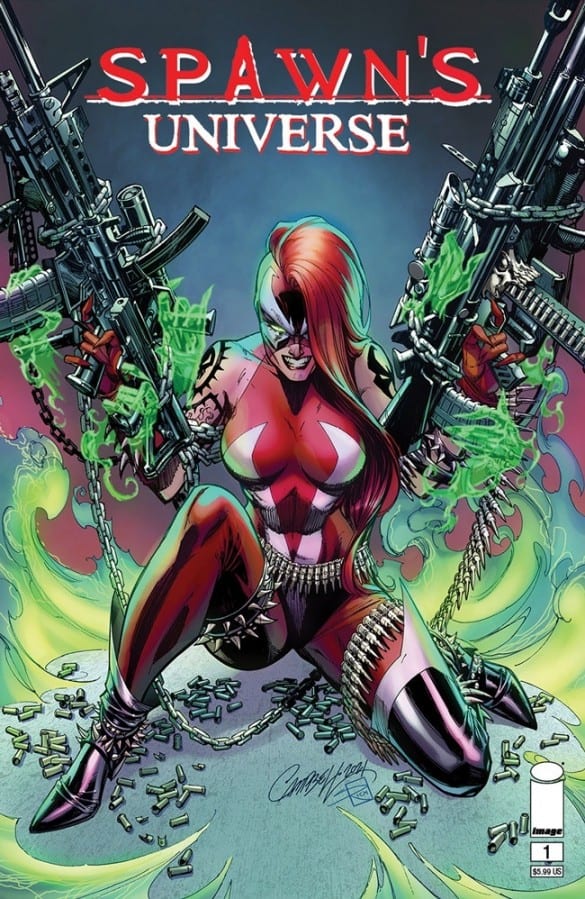 IT’S HERE: THE OFFICIAL INTRODUCTION TO THE LONG-AWAITED SPAWN’S UNIVERSE!

A double-sized issue that begins a storyline so huge that three NEW SPAWN-related monthly titles will spill out from it, including…

A new SPAWN title. GUNSLINGER SPAWN monthly. And a new TEAM book bringing a handful of these characters together in their own book.

With this one-shot…the world of SPAWN changes forever! New heroes. New villains, and more importantly, new titles coming to a comic shop near you. Join this list of artists as we unveil a historic moment in the mythology of SPAWN’S UNIVERSE:

A one-shot three hundred and eighteen issues in the making, a universe born of long-lasting adoration from fans everywhere and a creative force that simply can’t be replicated. Spawn’s Universe #1 represents what many hope to achieve and what few comics will ever reach, taking advantage of a new surge in popularity that once again affirms the characters place in pop culture history.

To say the Spawn franchise is currently experience a moment would be a major understatement, since the record breaking Spawn #300 and #301 and even before, the comics have been selling remarkably well. Even this one-shot recently made headlines selling over 200,000 copies making it one of Image’s top selling first issues of the 21st century! Not to mention the fact that creator Todd McFarlane is currently working on a new live-action film with Blumhouse and even a new TV series featuring Sam & Twitch. Spawn’s Universe #1 is an effort to capitalize on that success, no doubt, but it’s also giving fans EXACTLY what they could hope for. 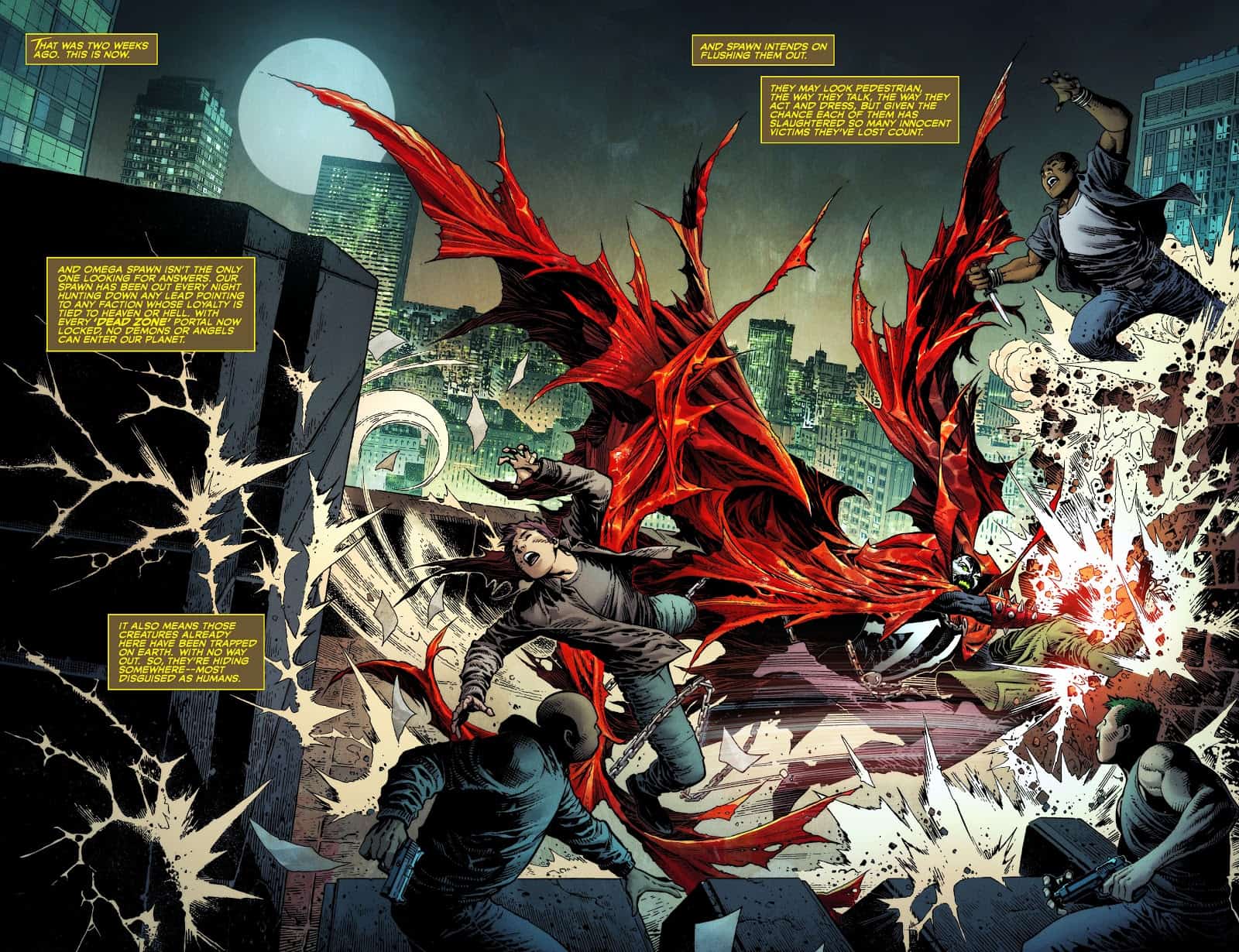 The legacy of the Hellspawn is long and rich with lore, characters and new stories to be told. Though there have been expansions and spinoffs for the Spawn franchise in the past, what we find in the pages of Spawn’s Universe #1 is a love letter to long-form storytelling, using comics to do what no other story could. It’s a true delight for longtime readers such as myself, with homages on the panel going all the way back to Spawn #100 which released over twenty years ago. With McFarlane himself taking on writing duties, the one-shot takes everything we’ve come to love about the series and elevates it to a whole new level.

There is no denying that a lot is riding on this issue. Not only is it laying the groundwork for the main ongoing Spawn series, it also serves as the launching point for brand-new upcoming series expanding the Universe such as King Spawn, Gunslinger Spawn, and The Scorched. With so much to expand and elaborate on, Spawn’s Universe #1 doesn’t waste any time in getting right to the heart of everything that is happening. We have new villains inspired by the longtime manipulator Cogliostro (who of course has something tucked away for just this type of situation), all while the new Spawns who have started popping up since Spawn #300 find a new understanding of their place in the current times. It’s a world building issue, one that moves each piece with predetermined intent with a keen understanding of the shoulders this new Universe rests upon.

In such an undertaking, Spawn’s Universe #1 succeeds in kicking off such a massive expansion of the franchise thanks to the numerous epilogues featuring Medieval Spawn, She-Spawn and Gunslinger Spawn. These help to branch out the Universe and give context to the many different plotlines now spilling out of the main series and giving precedent to a one-shot such as this. There are a ton of moving pieces and splintering narratives to follow that all work together in setting up a grand scheme of this interconnected universe of titles. Longtime readers who have stuck with the series and even those who read Spawn twenty years ago will feel more than welcome to dive into this thrilling next chapter.

But if this is your first Spawn comic ever, you better buckle up.

While it might not go too far out of its way to explain each and every thing to a completely new reader, I’m not certain such a feat was even intended from this creative team. After so many issues of the main Spawn ongoing series setting up this very expansion and considering the task it had of launching so many new series, the narrative simply didn’t have time for yet another origin recap of Spawn or rehash of events from Spawn #300. McFarlane instead leans into his fanbase more than ever to catapult the franchise forward and I believe because of that, Spawn’s Universe #1 has a real chance to thrive. 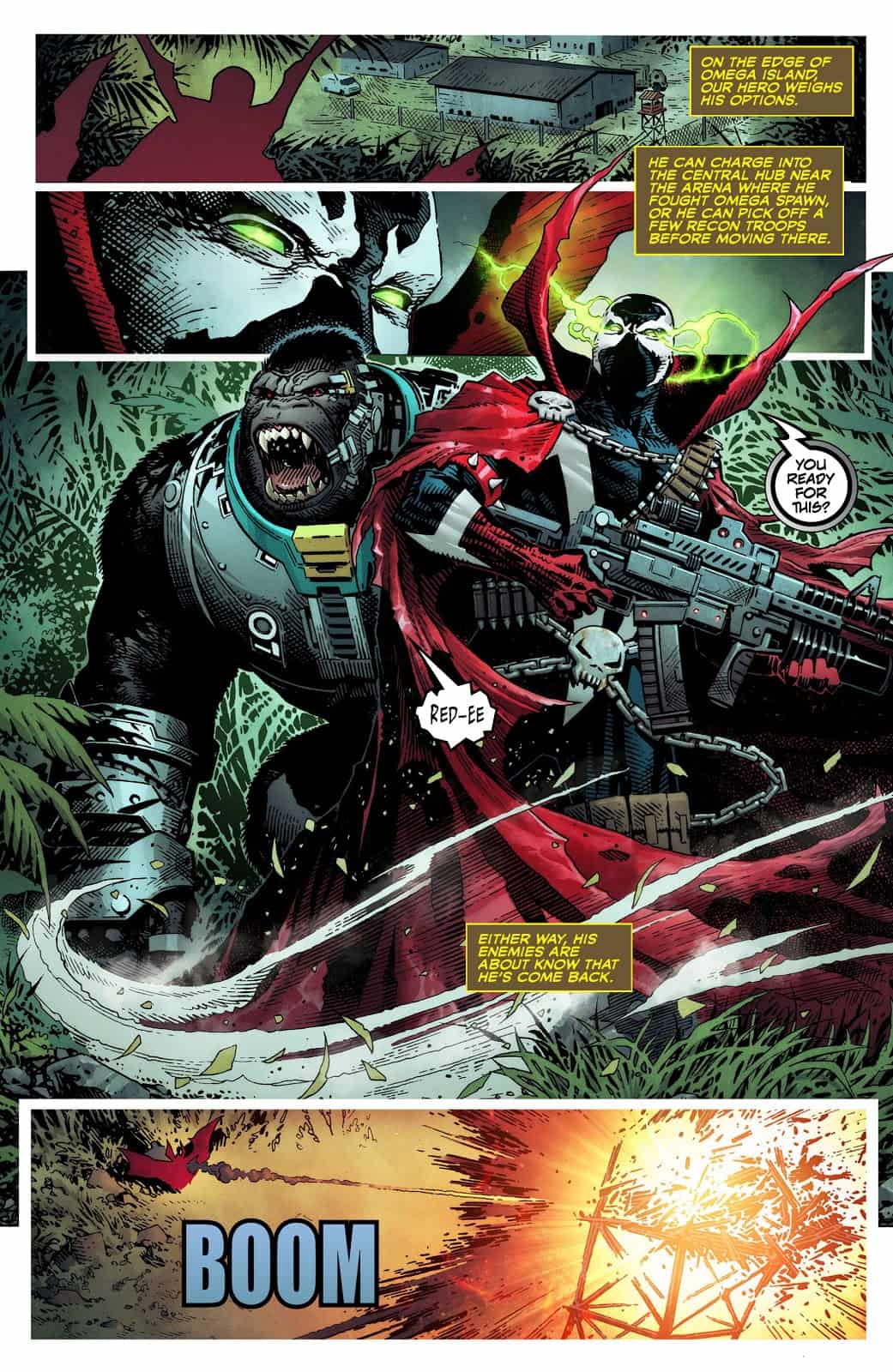 It took a full team of artists to bring this issue to life, but each and every one brought something unique and special to the table to bring out the very best of Spawn. Jim Cheung is arguably among the most underrated interior artists in the industry right now and we can see just why in the main story of this issue. What’s so uncanny about Spawn’s Universe #1 is just how cohesive the overall execution really is though. With Brett Booth, Stephen Segovia and Marcio Takara taking on the three epilogue-style stories at the end we are able to see a visual approach and overall aesthetic that all melds perfectly together. It’s this thoughtful design that helps to give such an expansion a natural and effortless feel as a reader and also build even more excitement at all the new stories to come.

What would a Spawn story really be without Tom Orzechowski, though? While Andworld Design does offer some assistance with the lettering, fans everywhere can rest assured that the iconic letterer’s work is just as impactful here as ever before. Tom brings just the type of flair you want to accentuate Todd’s moody writing, helping to give it a sense of character that has come to define the long-running series. Along with a stellar team of colorists like FCO Plascencia, Andrew Dalhouse and Peter Steigerwald, the overall visual delivery is just phenomenal, giving us a story that feels rooted in the Spawn lore that has been building for decades.

Spawn’s Universe #1 is an artistic powerhouse, led by a group of seriously talented creators who feel determined to take this franchise to the next level. It’s an exercise in longform storytelling that so few have the opportunity to do and even fewer successfully accomplish. It could easily be read as a victory lap, celebrating the success that allowed its existence in the first place, but it can also just as easily be read as a sign of what’s to come. A launching point standing on the shoulders of decades of success, looking towards an even brighter future and a relentless drive to solidify Spawn‘s place among the most popular of comic book characters.

If you once loved Spawn and want to remember what that felt like, or if you want to dive into the war between Heaven and Hell and all that lies between for the very first time, Spawn’s Universe #1 has just about everything you could ever want. If you are a longtime reader, and have stayed up to date with all the latest, this is just yet another triumphant step for the action-horror series that simply can’t be stopped.

Spawn's Universe #1 is an artistic powerhouse, led by a group of seriously talented creators who feel determined to take this franchise to the next level. It's a love letter to long-form storytelling and the potential that only comics can provide, delivering an unforgettable one-shot and launching a brand new universe that doesn't show any signs of slowing down soon.