Spider-Man #1: Nothing is Safe from the Spider-Verse! 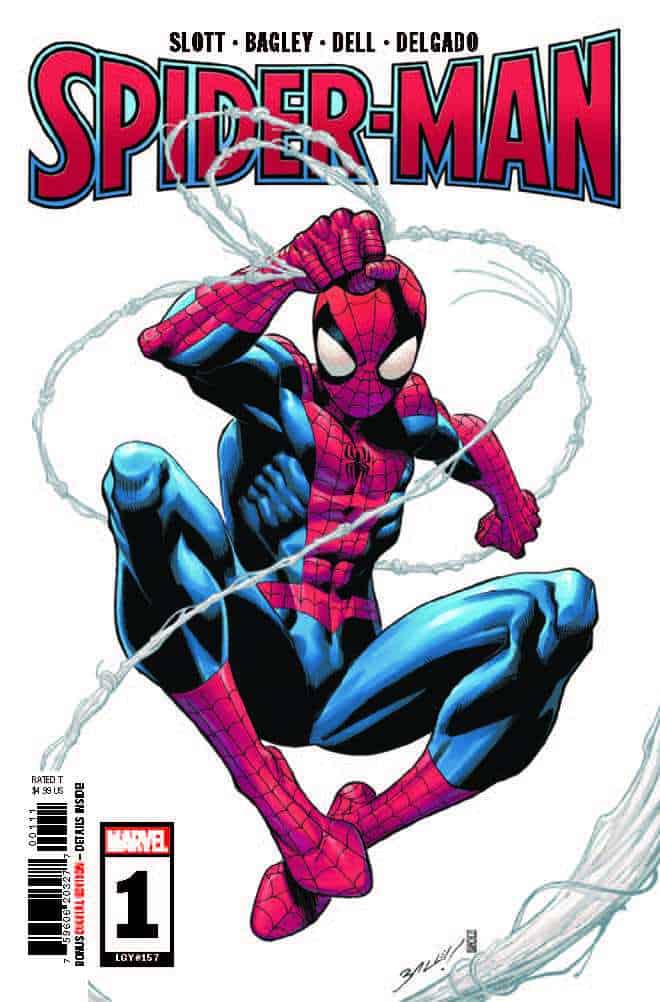 “The End of the Spider-Verse” is here! Morlun is back and he is not alone. Allied with one of the most powerful beings known to the Spider-Verse, the scariest Spider-Villain of all time is making his biggest play and no Spider is safe. Especially not the Chosen Spider himself, Peter Parker. With Peter working for Norman Osborn and using a glider…does he have it coming? Spidey’s 60th Anniversary is no joke as two of the most legendary Spider-Creators are working together on Spidey for the first time and you know it’s going to be one for the record books!

When it comes to my relationship with Spider-Man, I’m a casual fan at best. I know – Spider-Man’s the most popular superhero in the world right now. It’s not that I don’t like the character – I really do. He’s just not one of my “I gotta get into all of the details and get anything and everything related to him any chance I get” characters. He’s definitely a great character in general – I just consider myself, as I said, a casual fan.

But if anything was going to change that status for me, it would be this issue, Spider-Man #1. 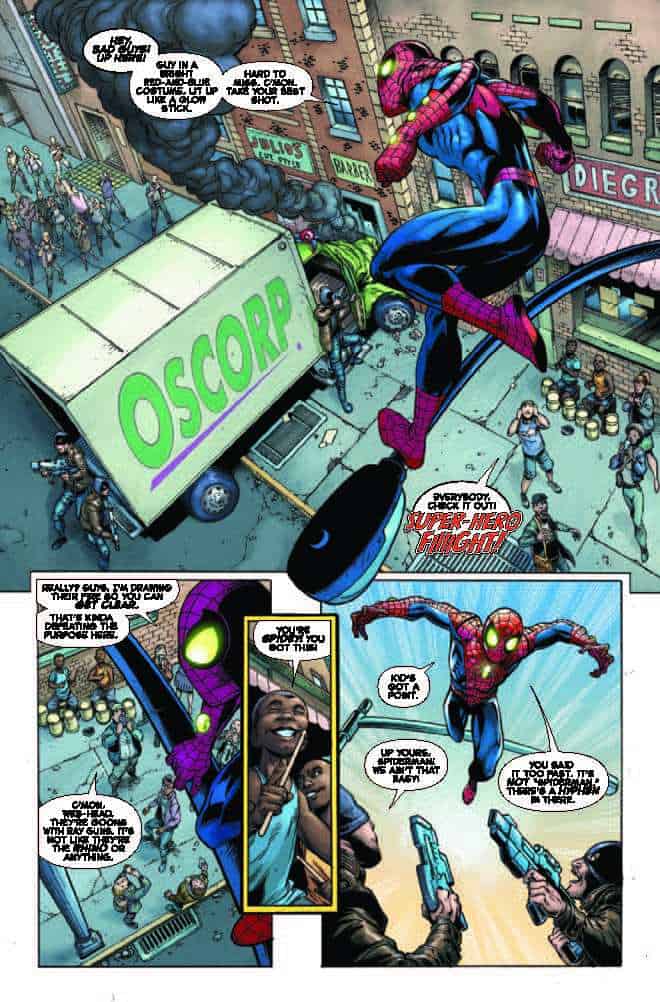 What’s crazier about this is, I haven’t been keeping up with Edge of Spider-Verse. Apparently, this follows up on that series, but I’ll say that I haven’t been lost in reading this issue because they did a good job of giving the new reader the details they need, and I just absolutely love every page that this had to offer.

This issue packs in so much action, mystery, and drama that it’s amazing how great this issue reads without feeling like it’s being rushed. They paced it so well that it gives you just enough for you to know what’s going on without sacrificing the story itself. We went from getting a single page at the beginning that explains Peter’s backstory to how he’s working for ex-Green Goblin Norman Osborn (who knows who Spider-Man is, and appears to be friendly with him!) to going straight into a crime-fighting scene, and it seriously snowballs from there. I don’t know how they are going to top this issue! 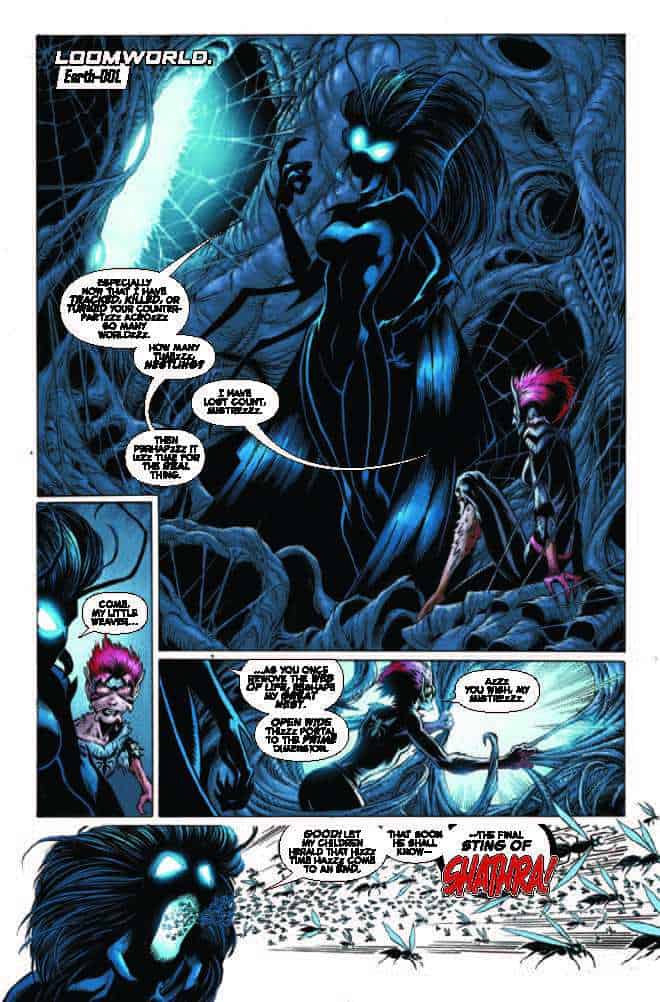 One of the things that this issue sets up is the players of the Spider-Verse and how they play a role into this story. We get the typical villain from Earth-001 (Shathra) and our mystery universe friends that will be helping 616’s Spider-Man (one of these friends even calls him “The Chosen One” – let’s hope we don’t get an Anakin Skywalker situation!). We get visits from other Spiderverse heroes and major surprises (no spoilers here) that will make you literally freak out with each page.

The artwork here is very impressive. The creative team used different art styles to represent the different universes that are being shown here in this issue which is very impressive and looks like a lot of fun for artists. The lettering was really exciting in that it matched the story developments. Honestly, I think this is a story that needs to be on your pull list. 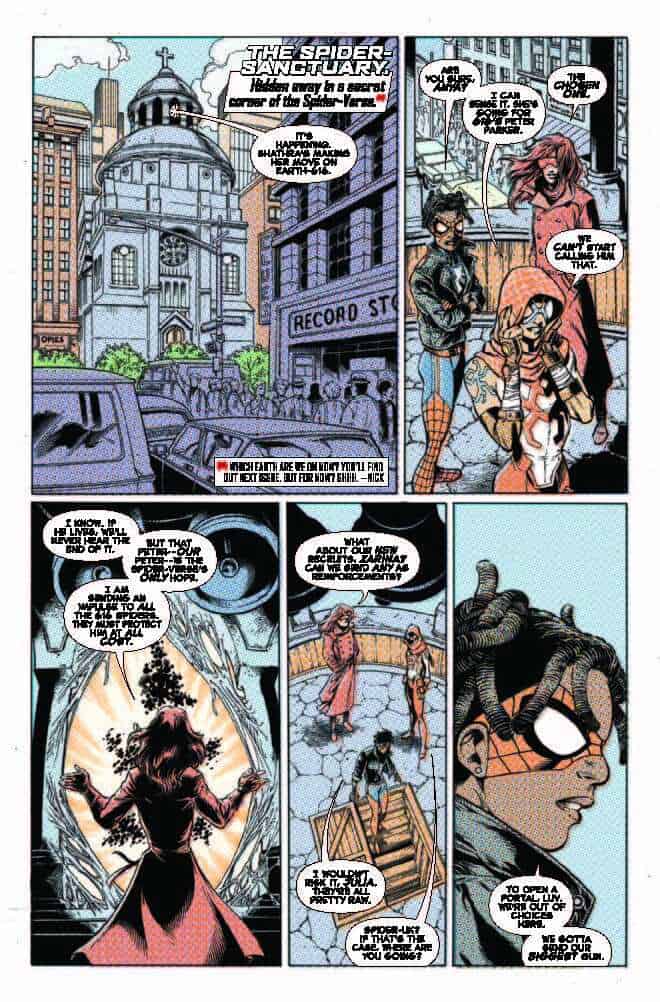 As a casual Spider-Man fan, this series has already made me want to become a die-hard fan with all of the exciting elements that we are already getting in this one issue alone. Add it to your pull list today!

Spider-Man #1: Nothing is Safe from the Spider-Verse!