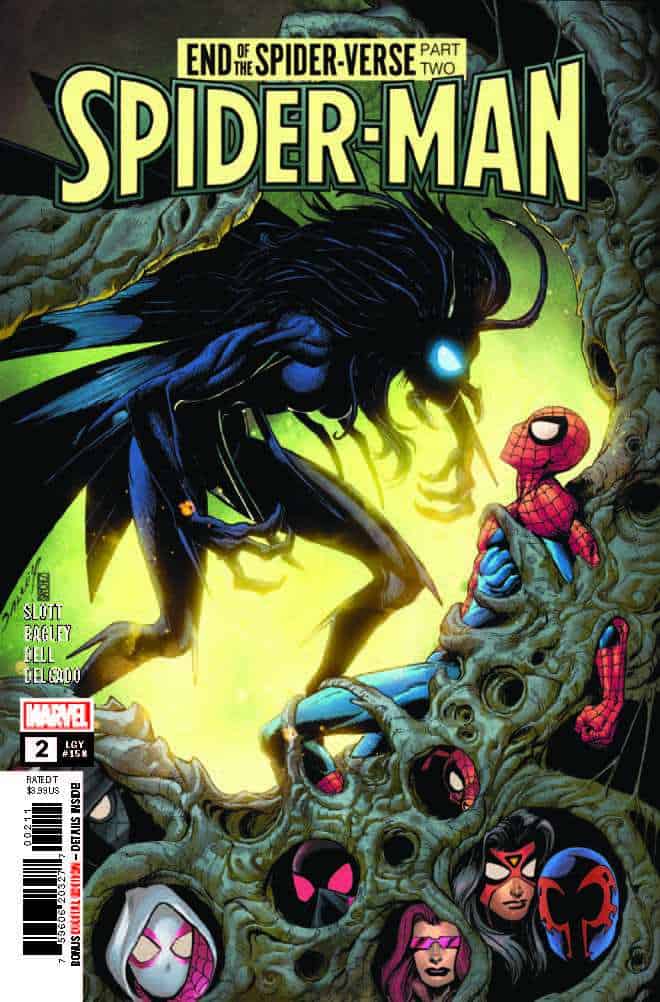 “THE END OF THE SPIDER-VERSE” RAGES ON! After the tragedy of the first issue, our Spider-Heroes try to make a plan against Morlun. But Morlun isn’t their only problem… SHATHRA is back and more powerful than the last time she nearly killed Peter and Ezekiel. Last time, Peter tricked Shathra, and she’s had plenty of time to plan his death and the death of ALL SPIDERS!

When I reviewed issue 1 of Spider-Man, I was hooked. I was not an avid reader of the character, but this issue was so great that I added it to my pull list. But there’s always that fear of the first issue being so good, could it get any better?

Well, no need to have your Peter-tingle going off because this issue cranks it up the never level!

Slott has done an amazing job writing a compelling story that weaves the various Spider-Man characters into a single story. What’s even more impressive for me is, as someone who has not read The Edge Of Spider-Verse, I did not feel like I was lost or missing out on the story. Sure, I didn’t know who some of these characters were other than what I’d seen on social media, but just like any story that introduces a new character, Slott does a great job of being able to write in the necessity without losing the audience or the story (in other words, it doesn’t sacrifice the story, readers new to Edge Of Spider-Verse get what they need, and those who have read it don’t feel like they’re getting another retelling to the point that it’s redundant for them). 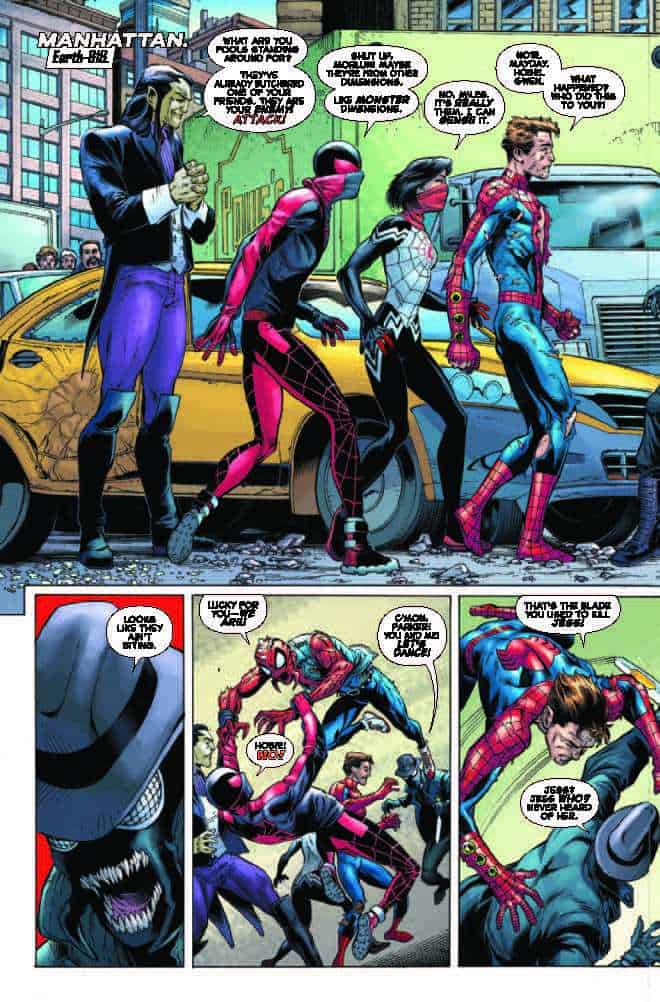 I also love how the characters interact with one another, even if they are part of the Loomworld Hive (or whatever the technical term may be for it). There’s some great bantering, personalities shine through even if they are under mind control, and a lot of playful banter that makes you laugh while you read. With issue one seeing the surprising demise of Spider-Woman, this issue continues the theme that the lives of Peter’s friends and family are at risk and none of them are safe until they can stop Shathra.

The pacing of this comic was really well done. We start off with a fight scene between Parker & friends and the Loomworld’s mind-controlled Spider-Heroes, and it eases into the Earth 616 characters escaping into another world and learning a little bit more about why Morlun is helping them in this issue. Although the story is a bit vague on some of the details, this seems to be done intentionally so as not to reveal any key details for a later issue.

Although there were a couple of scenes that I thought the writing may have been mediocre (e.g. the surprising appearance of two characters and how they introduce/reintroduce themselves), the story in this issue is by far a thrilling ride, and so many surprises and exciting moments that make you flip through the pages for more. 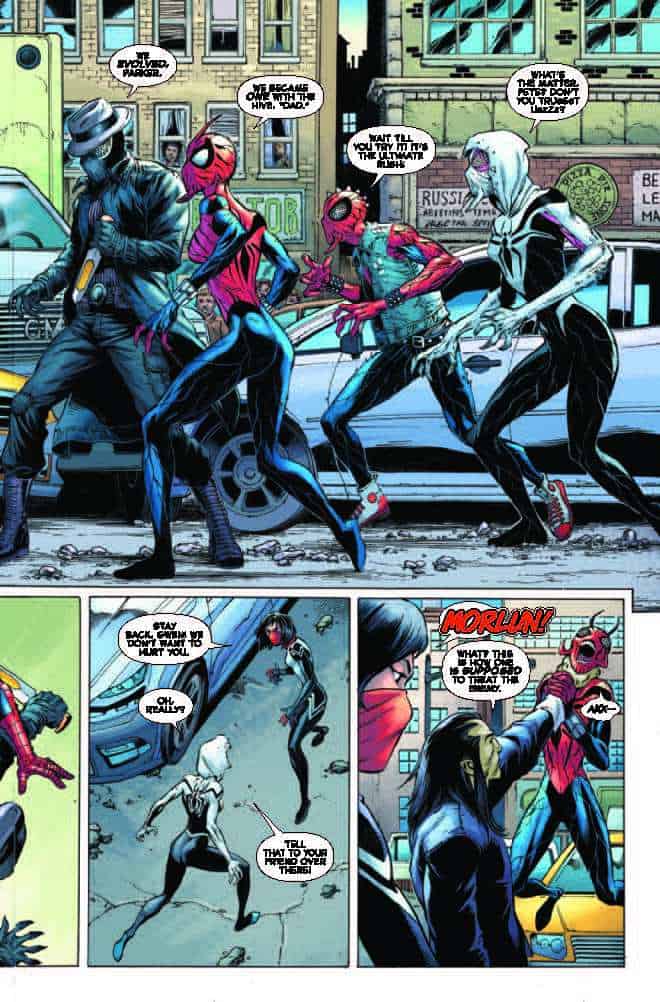 The artwork by Bagley, Dell, Delgado, and Caramagna should be highly commended by readers and Marvel. The detailed artwork in making the Spider-Heroes into a hybrid version of a spider (or some other sort of arachnid/insect) is awe-striking. You can still tell which character they are with the costume but it looks like their whole biological structure has morphed into a new species and you can’t take your eyes away from it. You keep looking through to find new details in the character’s design that make you appreciate the time they’ve put into these characters.

I also absolutely love the pages where the Earth 616 heroes jump into the Spider Sanctuary in Earth 616 Beta. The art team did an amazing job in making the world feel like an old comic book from the 60s and inserting the current characters in this world unchanged. That is a lot of fun for not just the art team, but for the readers who enjoy and appreciate seeing a callout to the classic comic styles as well as attempting to have fun with a complex idea as such. 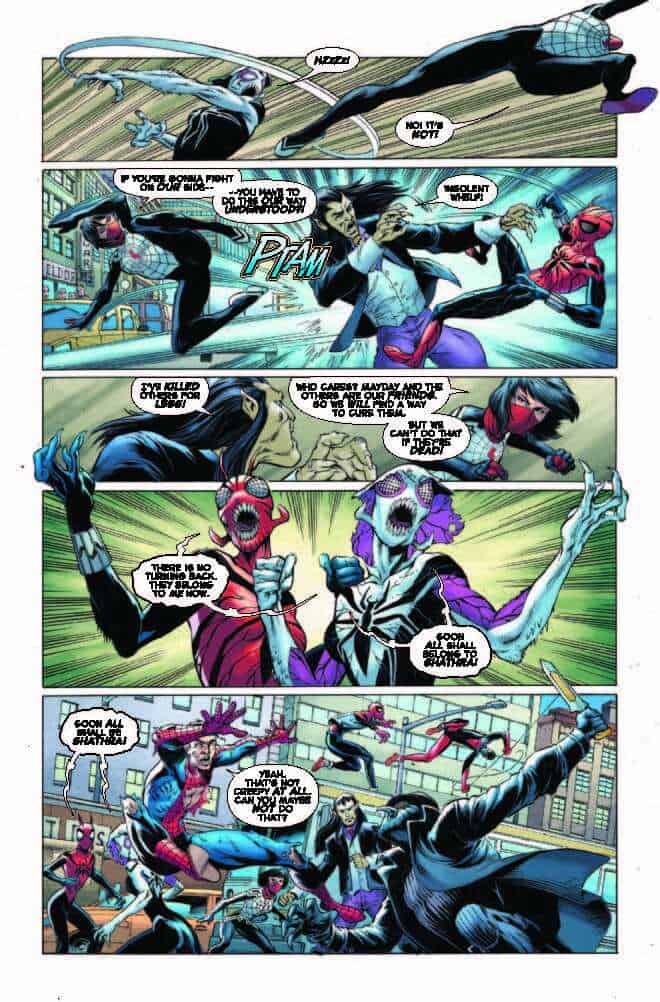 The story may be the ride, but the artwork is what sells it as the experience. The creators behind this issue have done a phenomenal job of leveling up each story with a new twist and elevating the stakes for the protagonist. But most of all - the issue starts with a very, very exciting surprise Spider-hero character that I think any fan of Spider-Man will absolutely drop their jaw when they read it. And fun fact - I kinda dropped an Easter Egg in this article about this. Hope you enjoy!