Young Ben Parker has just discovered his deadbeat dad, Peter, was at one time Spider-Man! How does he handle this revelation? 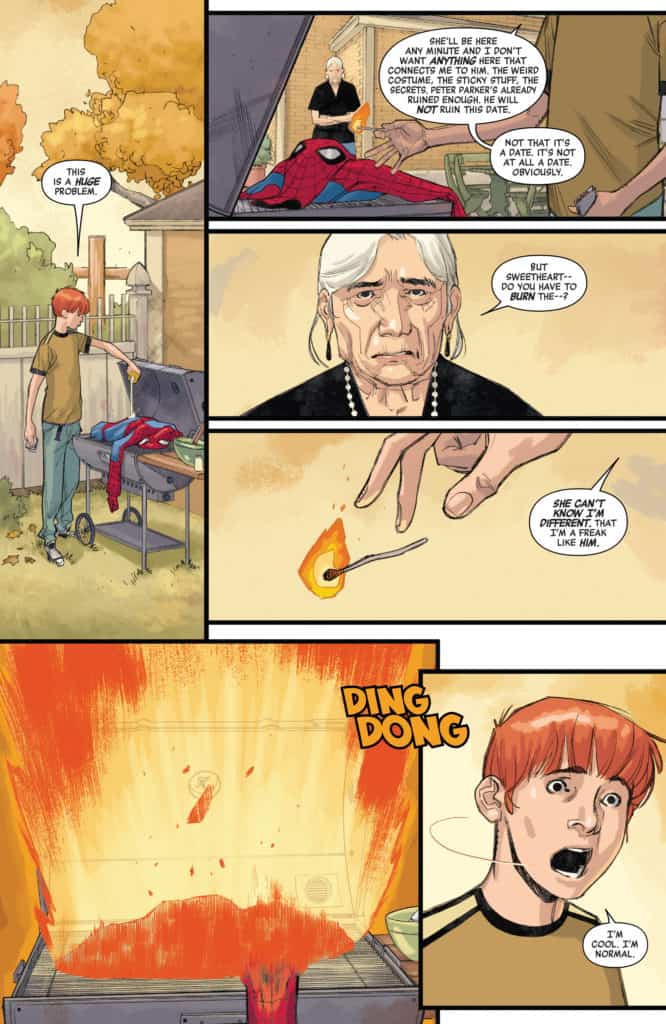 Fortunately, he has a new crush named Faye Ito, who is very into the fact that Ben beat up some bullies, and wants to hang. Faye shows up at the Parker residence in a very peculiar mode of fashion...

Faye, as it turns out, is inviting Ben to a kind of costume party. Fortunately, per Aunt May, "[his dad] had plenty more" costumes to choose from. Thus begins Ben's first outing as sorta-Spider-Man!

Writer J.J. Abrams and son Henry may be cribbing a bit from the Ultimate Spider-Man playbook, but damned if their – and artist Sara Pichelli’s – Spider-Man miniseries wind up hitting all the right notes despite that. Ben Parker is a genuinely likeable kid, and his bass-ackwards way of falling into his father’s legacy as Spidey is pure enjoyment. Make no mistake: this is a 2019 Spider-Man through and through, fighting social injustices just as much as he is saving people from collapsing buildings.

Of course, part of the fun is watching this freshman kid figure out what it is he even believes in. He’s swept up in Faye Ito’s whirlwind, thinking he’s going to a costume party, but in truth is out tagging local businesses with protestations about their business practices. It’s anarchy for the PG-13 set, but exactly how this grumpy ol’ former angry youth/current 30-something would expect kids of today to rebel against the system. It’s not just trendy anarchy for its own sake, it’s a social justice statement too. And pure Instagram fodder. And for all her idealistic naivete, Faye Ito winds up being one heck of a cute crush for our young Ben. So much so, that he winds up spilling the beans on who he (and more importantly, his father) is, though at the point which he does so, it becomes kind of unavoidable.

Ben, for his part, has a fairly predictable reaction to discovering his deadbeat dad (sorry, Peter, but it’s true) was Spider-Man: anger. He already wants nothing to do with the man, but now he blames him for Mary Jane’s death, too. Immediately after discovering Peter’s old costume, he takes it to the grill and incinerates it, owing his father’s legacy nothing – until he needs a quick costume. It’s ill-fitting and a little saggy, which creates a great visual reference to a little boy wearing his daddy’s clothes. Ben, though, has more of his father (or at least, who his father used to be) in him than he realizes, and circumstances soon collude to bring out the young man’s inner hero. And somewhere in the shadows, Cadaverous – who killed Mary Jane twelve years back – awaits.

The writing on Spider-Man #2 is genuinely fun despite some rote turns. Sara Pichelli’s art, though, just can’t keep up. Too often, her figures look rushed, and in lieu of background she just leaves a blank canvas for colorist Dave Stewart to fill in. But when she’s on, her art looks great – it’s just inconsistent throughout. One thing she does very, very well is promoting a diversity of realistic body types. Ben and Faye genuinely look like young high schoolers by their physique. By contrast, Peter resembles a generally fit but slightly gone-to-seed former athlete, and Aunt May has really settled into her age in a natural way. Body language, posture, basic blocking – Pichelli has the chops to render these things in spades. Now if only she could turn out the total package, she’d be one of the industry’s brightest stars.

Spider-Man #2 proves that issue one was no fluke. It's a genuine joy to read throughout, quickly crafting memorable, engaging, and thoroughly enjoyable characters. But it's also a hard look at legacy, and what it can mean if a father tarnishes his own heritage for his children. Choosing to present Peter Parker as a broken man running from his responsibility is a bold, divisive choice, but thus far, both Abrams senior and junior have the chops to pull everything together.