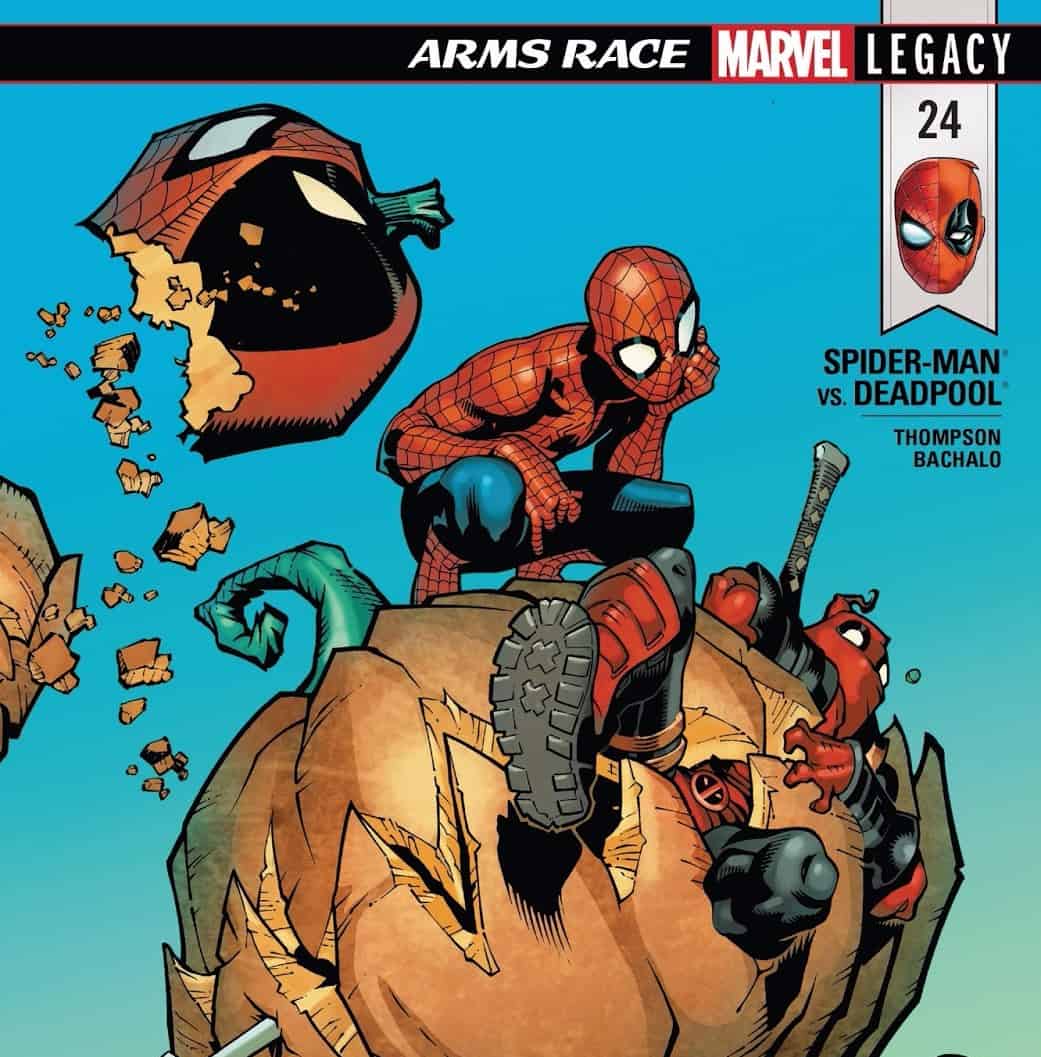 Spider-Man and Deadpool are hot on the trail of the one impersonating Deadpool and this lands them in Tabula Rasa. After a runin with an old acquaintance Spidey discovers Wade has other motives for being here.

Spider-Man has come after Wade to bring him to justice for his crimes during Secret Empire. There is an imposter Deadpool selling black market weapons on late night T.V. Deadpool has sort of kidnapped Spidey aboard his stolen helicarrier to help him take down the fake-pool. The two (sort of) besties are working out a few issues and could do with some couples counseling.

Falling through the sky with no real plan as our last issue ended, Deadpool suggests Spidey web up a parachute so they don’t go splat. They land in the curious area known as Tabula Rasa and encounter some rather unique life forms. Before being eaten by a crazy giant bird-like beast, Deadpool is saved by the appearance of Husk, who had been working for SHIELD and is now caring for said giant bird beasts. While she is happy to see Spider-Man, she blames Deadpool for things going wrong around the place. Spidey begins explaining there is a fake-pool, but he is still going to take the real-pool in for his crimes when the imposter attacks. Husk unleashes her mutant powers to take revenge for the death of one of her flock. Wade unmasks his duplicate to find his own face, ripping that off to reveal Dum Dum Dugan, leaving him confused. Deadpool teleports out amid the chaos, leaving Husk and Spider-Man to fend for themselves. Back aboard the helicarrier, Wade asks his crew if they’ve found what he’s really come looking for and his cowboy hat. Wade returns to the heroes just in time, riding one of his trained telepathic sharks to even up the odds. The imposter electrocutes the trio all in the water and reveals his true identity as an old nemesis of the web-slinger.

Spider-Man Vs. Deadpool continues as they track down the would-be Deadpool doppelganger. With a few trademark fourth wall breaks, Wade gets the reader involved on a more personal level. Finding themselves in the strange land of Tabula Rasa, they encounter all sorts of curious evolutionary life forms. We also get a quick check in on the telepathic sharks, Bruce and Deborah watching more Stranger Things. 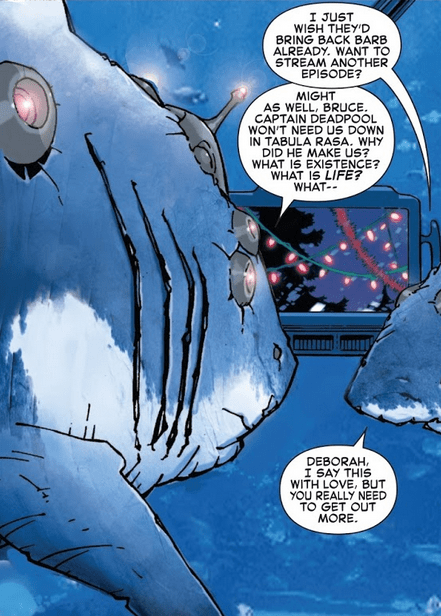 While Deadpool is about to be digested by a local creature, he has a reflective moment on atoning for his crime of killing agent Coulson, admitting that he may indeed deserve to pay. This is an interesting moment for the character, one of the few we have seen throughout the series where Wade gets serious about the consequences of his actions. I think these moments are imperative to the book to balance all the silliness and comedic retorts, it really humanizes the characters. 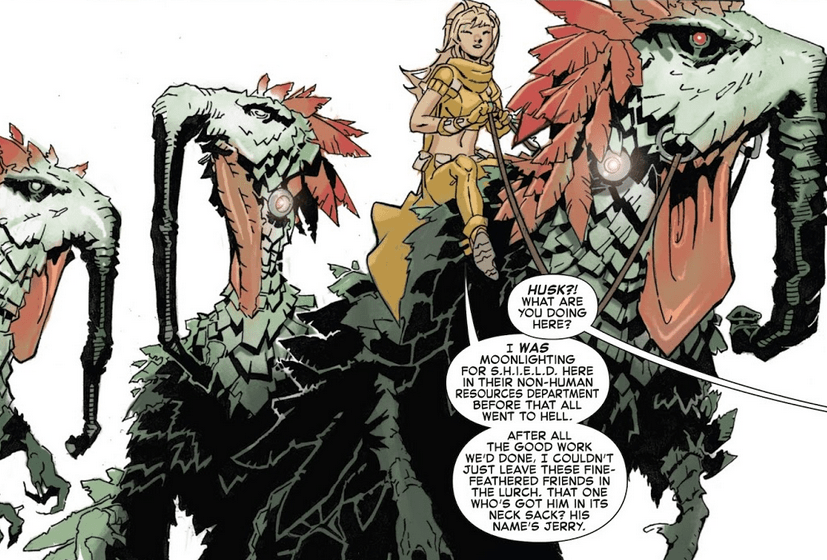 A surprise appearance of the X-Man Husk saves them from an encounter with some of the natives and confirms that the imposter posing as Wade is indeed here and causing trouble. At this point, their foe attack with his own pack of creatures that had been locked up, for good reason. During the fight, Wade removes several masks from his opponent, who goads him about the real reason he is here, the hidden weapons. Giving Spidey and Husk some survival advice, Deadpool searches his bag and produces a Bamf, using it to teleport back to the helicarrier. Aboard, his team informs him that they have found a vault where their true prize may be and that the radiation leaking from Tabula Rasa is destabilizing the ship and may soon crash. Deadpool arrives back to save the heroes in true style and we find out why he wanted his cowboy hat. 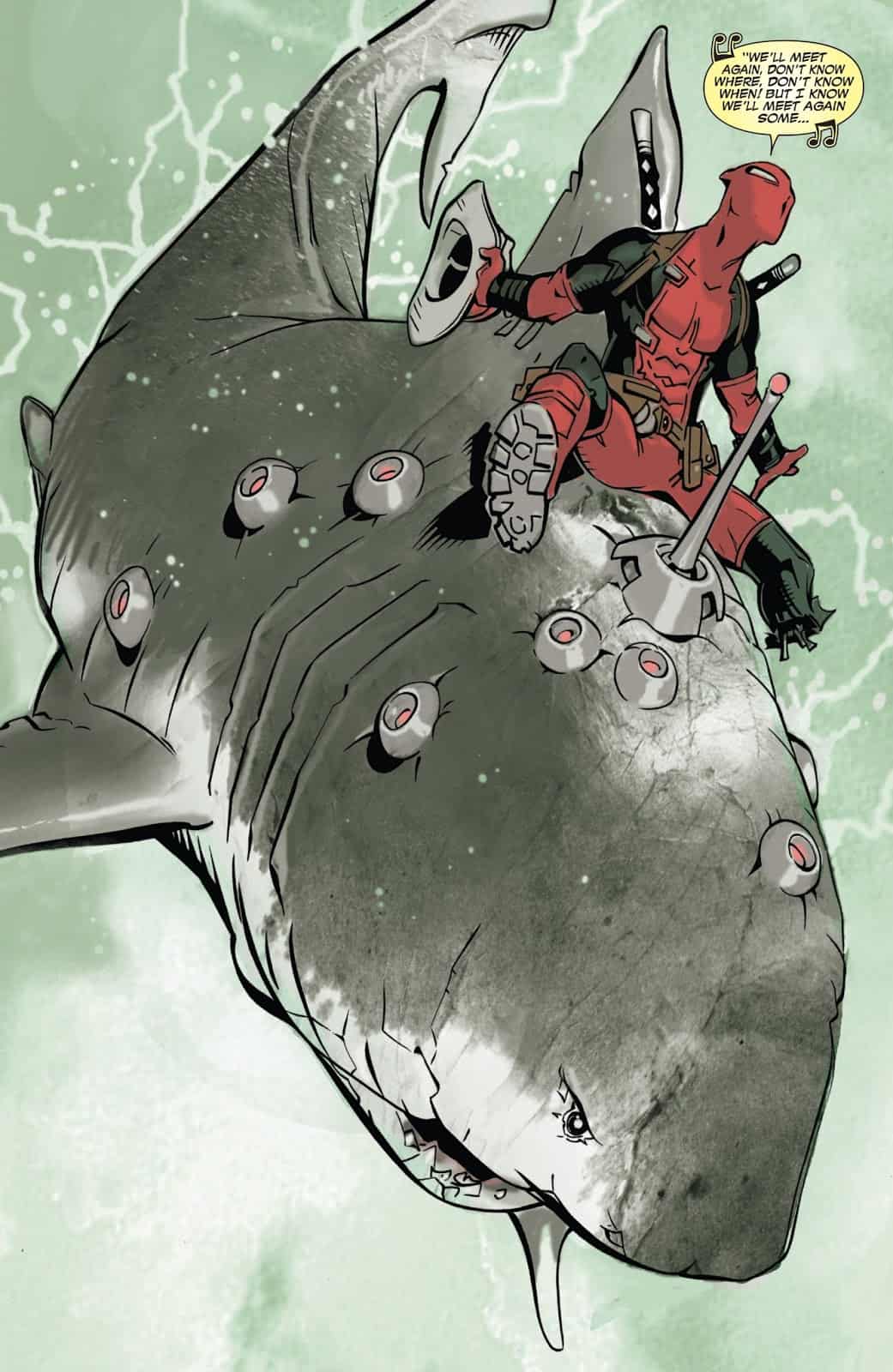 The victory is short-lived, however, as the enemy subdues our dynamic duo and their temporary team-mate. He finally takes off the last mask to reveal himself as The Chameleon. After the first mask or two, I had a strong suspicion this is who we were dealing with and wasn’t surprised by the end reveal. I am interested to see how this pans out, will Deadpool and Spidey make up? Who will get the secret treasure? We’ll find out in 30 days I hope.

Final Thought: It was a fairly fast-paced story this issue, that felt a little too quick. There didn’t feel like much development between Spider-Man and Deadpool, the attention seemed to be taken away from them with the appearance of Husk. Which was be a welcome highlight and I am giving extra points for including her. Bachalo’s quality art will always keep you interested though.