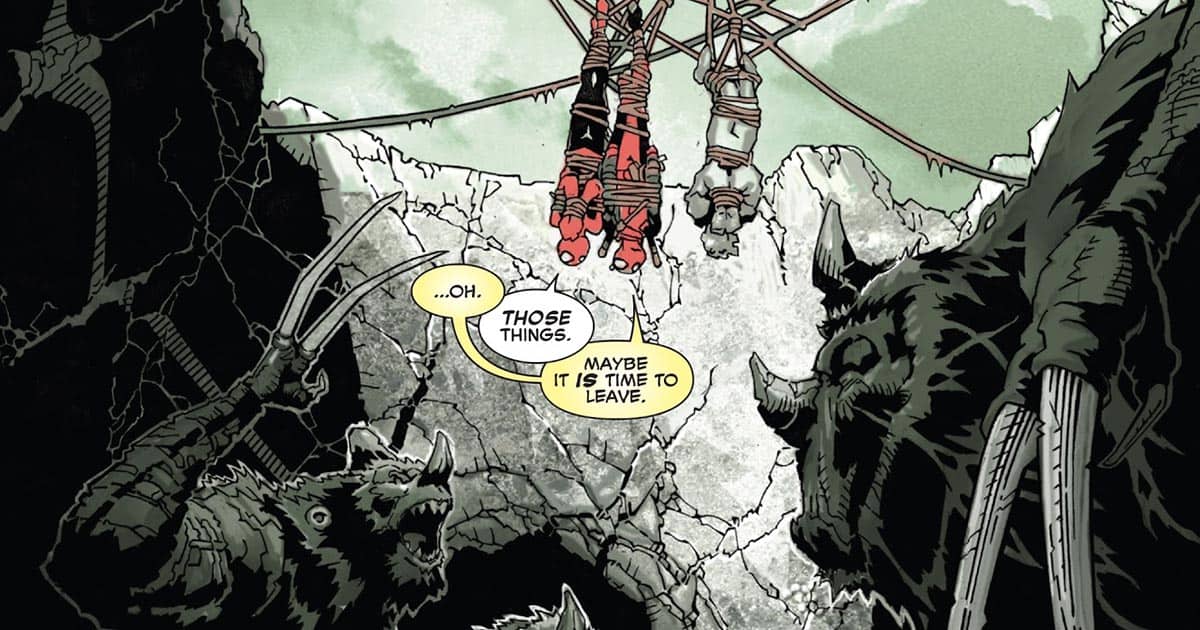 Captured by the Chameleon in Tabula Rasa, Deadpool, Spider-Man and surprise guest Husk find themselves hanging by a thread. The arms race is heating up as Deadpool tries to beat the Chameleon and Spider-Man tries to stop both from finding the secret cache of S.H.I.E.L.D. weapons. 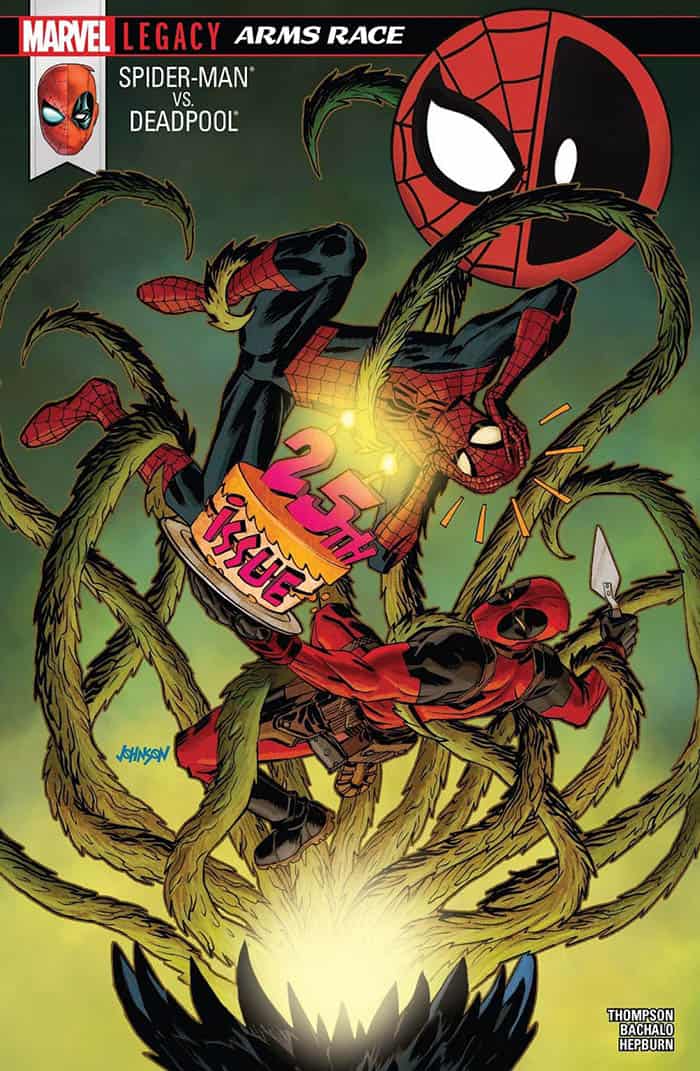 What You Need to Know:
The Chameleon has been impersonating Deadpool to sell black market weapons, which led Spider-Man to track down the real Deadpool and bring him to justice. They eventually tracked the imposter to Tabula Rasa, an area in a constant state of evolution thanks to Dark Beast and Archangel combining a Celestial Life Seed and The World. As it turned out, Deadpool really brought them here for the same reason as the Chameleon, more weapons. To make matters worse, we last saw our heroes electrocuted and incapacitated by their foe.

What You’ll Find Out:
The scene opens with Deadpool’s team looking for him, including Deborah checking on Bruce (the telepathic sharks). There is also the issue of the crack in the dome surrounding Tabula Rasa, leaking radiation, and as soon as that is fixed whoever is left inside will be trapped. The hero trio, Spider-Man, Deadpool, and Husk are tied up above some grotesque evolutionary beasts and Husk sheds her stonish form to escape her bonds and free the others. All the while Deadpool realizes he is missing his right hand. Meanwhile Chameleon accesses the secret weapons stash using Wade’s missing hand, which is later eaten by a vacu-bot for possible later purposes. 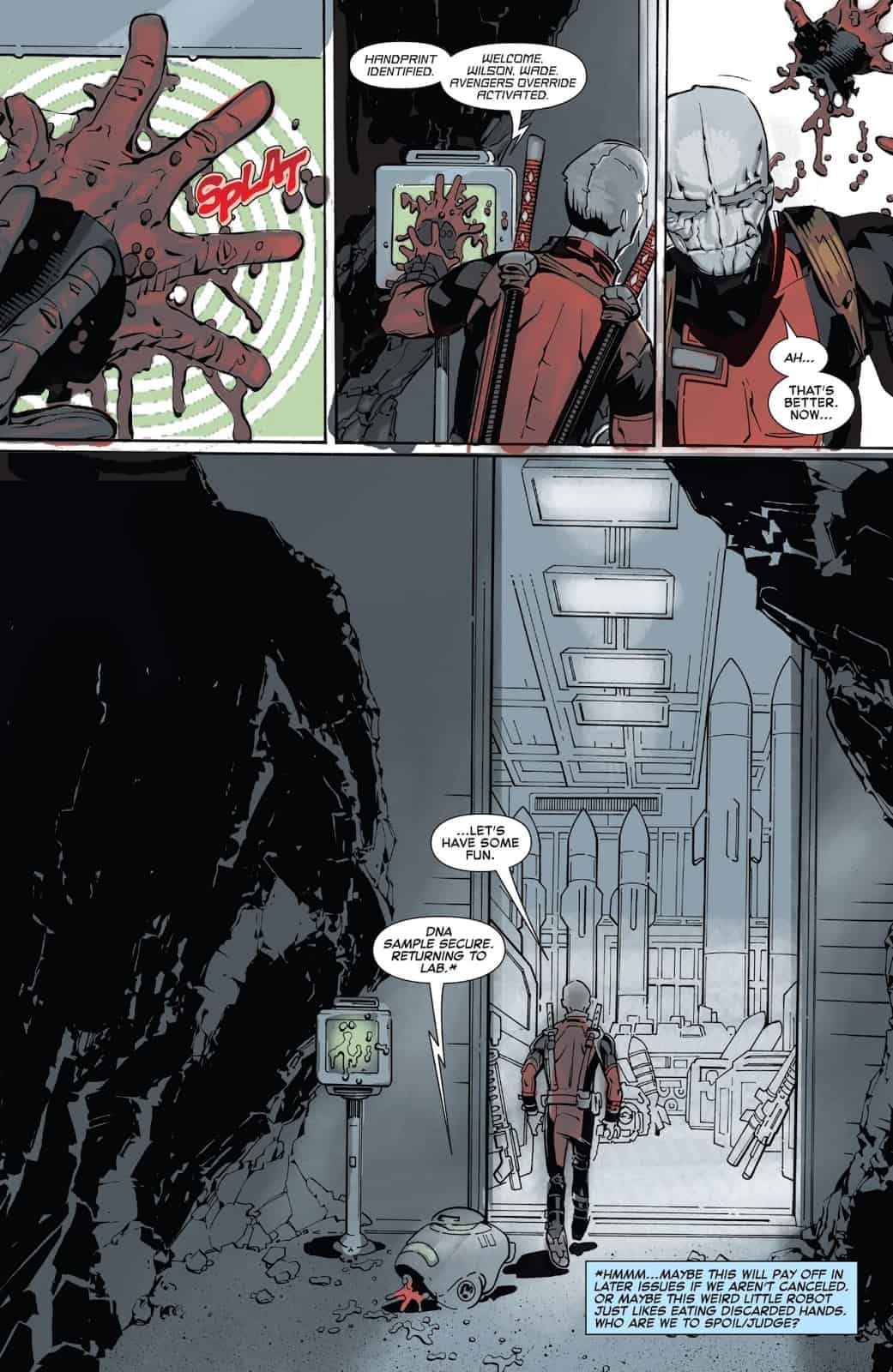 While Husk free’s the dynamic duo, Deadpool’s team arrive, with the sharks chomping their way through the strangely evolved beasts. The team makes their way to the weapons cache, where Chameleon is taking his pick of the perfection.

Having found a nice toy, he halts them from finding exactly what he was after. Then sets a group of top-of-the-line S.H.I.E.L.D. bots on attack mode to deal with his problematic hero squad. An apparent chemical leak sends Branch (One of Deadpool’s crew) into overdrive, enveloping the team in a mass of organic matter. Deadpool sends Spider-Man on to deal with the Chameleon but is thwarted by an electrocution security measure in his flying getaway car as it busts through the protective dome containing the strange land. When Spider-Man and Husk return to the weapons warehouse, they find it empty and trapped inside for at least 24 hours.

What Just Happened?
With our friends in peril, Husk uses her mutant power to shed her skin to their advantage and slip out of their bonds, only to be saved by Wade’s crew. With Deadpool missing a hand that Chameleon uses to access the weapons cache, it raises questions as to why Wade’s hand would override a S.H.I.E.L.D. access panel. The machine that then eats the hand and the editors note on the matter could lead to future plot developments. Chameleon’s choice of weapon here is very reminiscent of Rob Liefeld era X-Force. 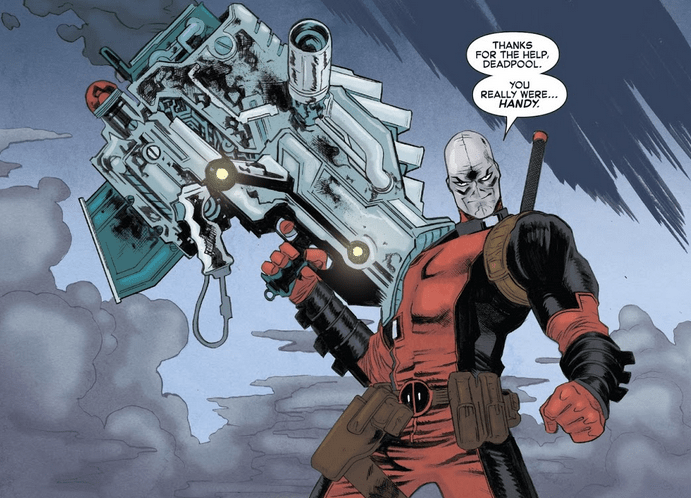 Branch’s sudden loss of control that Deadpool uses to send Spider-Man after Chameleon turns out to be a well-played ruse and when Husk and Spidey return to the warehouse, they find it cleaned out and trapped in lockdown mode for 24 hours. The finishing page gives us a feeling that this game is not over and we will more than likely be seeing the Chameleon bringing a stronger game to the table next time we see him. The choice of Husk as the guest character in this arc is not a random or chance appearance I believe. A character that can change their appearance and shed their skin is a good like the Chameleon does is a good parallel to the bad guy in the story.

The mixture of artists and inker’s can be picked up with minor subtleties if you look hard enough, with Bachalo’s pointy distorted figures swapped for more slightly smooth characters from Hepburn. But not really enough to change the feel of the book, which is a good effort from all involved. Joe Sabino does a good job of keeping the lettering away from the main art focus, even though he mixes long and short speech bubbled tails to get the job done. The colors are done well, keeping the environment in mind and again, having multiple artists are not a distracting factor.

Final Thought:
This arc has been a bit of a distraction compared to some of the compelling stories we got from Joe Kelly. As I’ve mentioned before, he has a special way of developing relationships between characters. This should probably be taken as building to something bigger in the grand scheme of things and took both characters back to their ground roots. Hopefully the future pay off is worth it.