Spider-Man: Life Story #1: In My End Is My Beginning 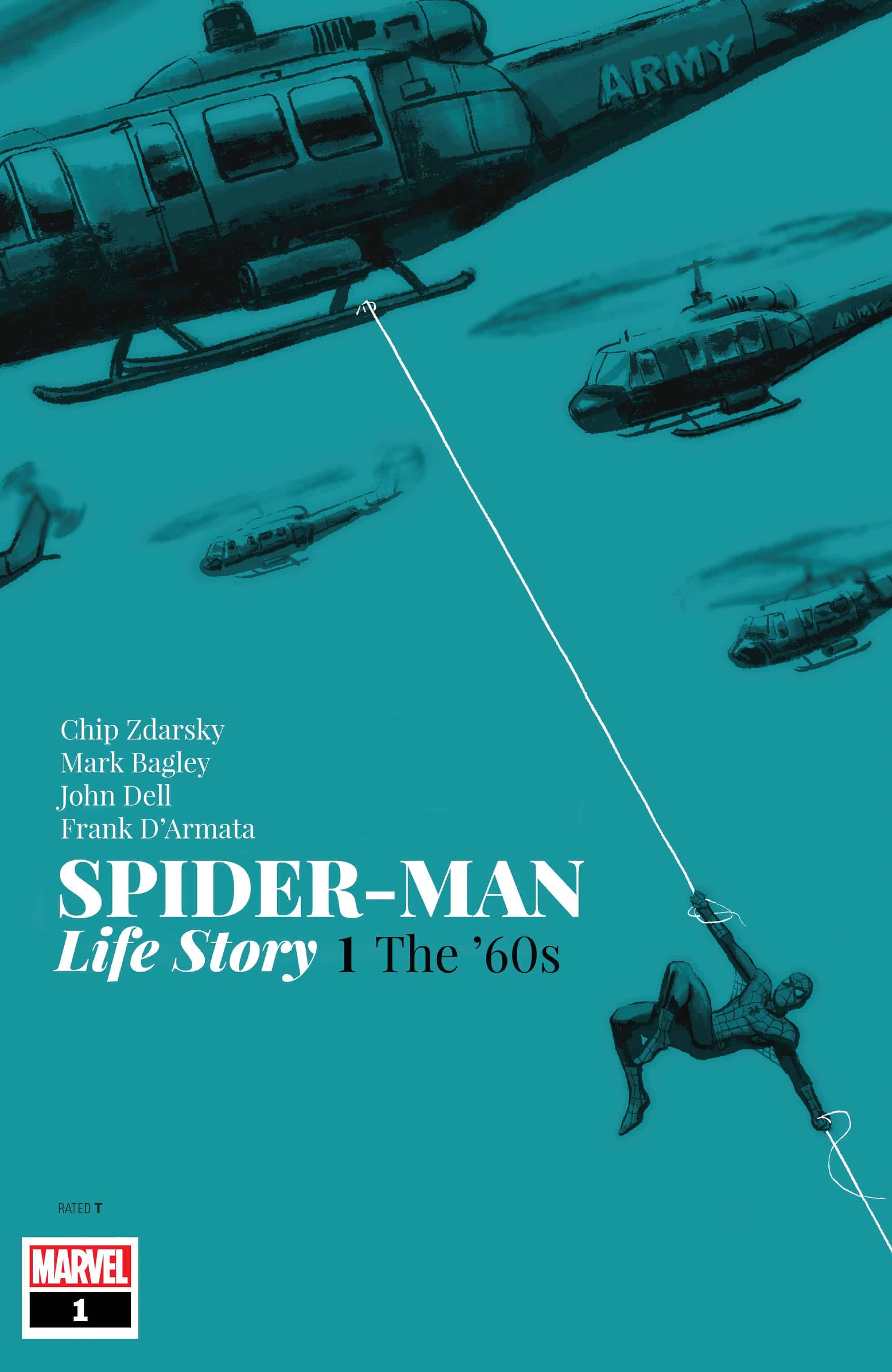 View the early years of Peter Parker through a fish-eye lens. In this issue, the sixties are swinging, war is brewing, and a college-aged Peter grapples with the question of responsibility and what each citizen owes the nation of their birth.

Superheroes are mythic figures. They tell the same types of stories, over and over again, without ever being allowed to age too much or gain any real maturity. As a medium, they are art and escapism all at once. We need our heroes to keep a secret part of our hearts (the most necessary bit) alive and golden despite the unshakable mortality of our shells. When we think of heroes, most people picture someone who could be comfortably exchanged with one of the Greek Gods, without too much trouble. Few readers select a figure like Beowulf who (spoiler alert for a 1100-year-old-poem) grows somewhat believably old and frail within the text before dying, rather ignominiously, chasing the wrong kind of gold. But we need those myths, too. We need to satisfy the what-if frission in our brains without threatening the true strain of ever-freshening story which slakes something in us, month after month, week after week, until the tyrannous child within us finally grows tired enough to creep quietly home. And so, every so often, we read something like this. 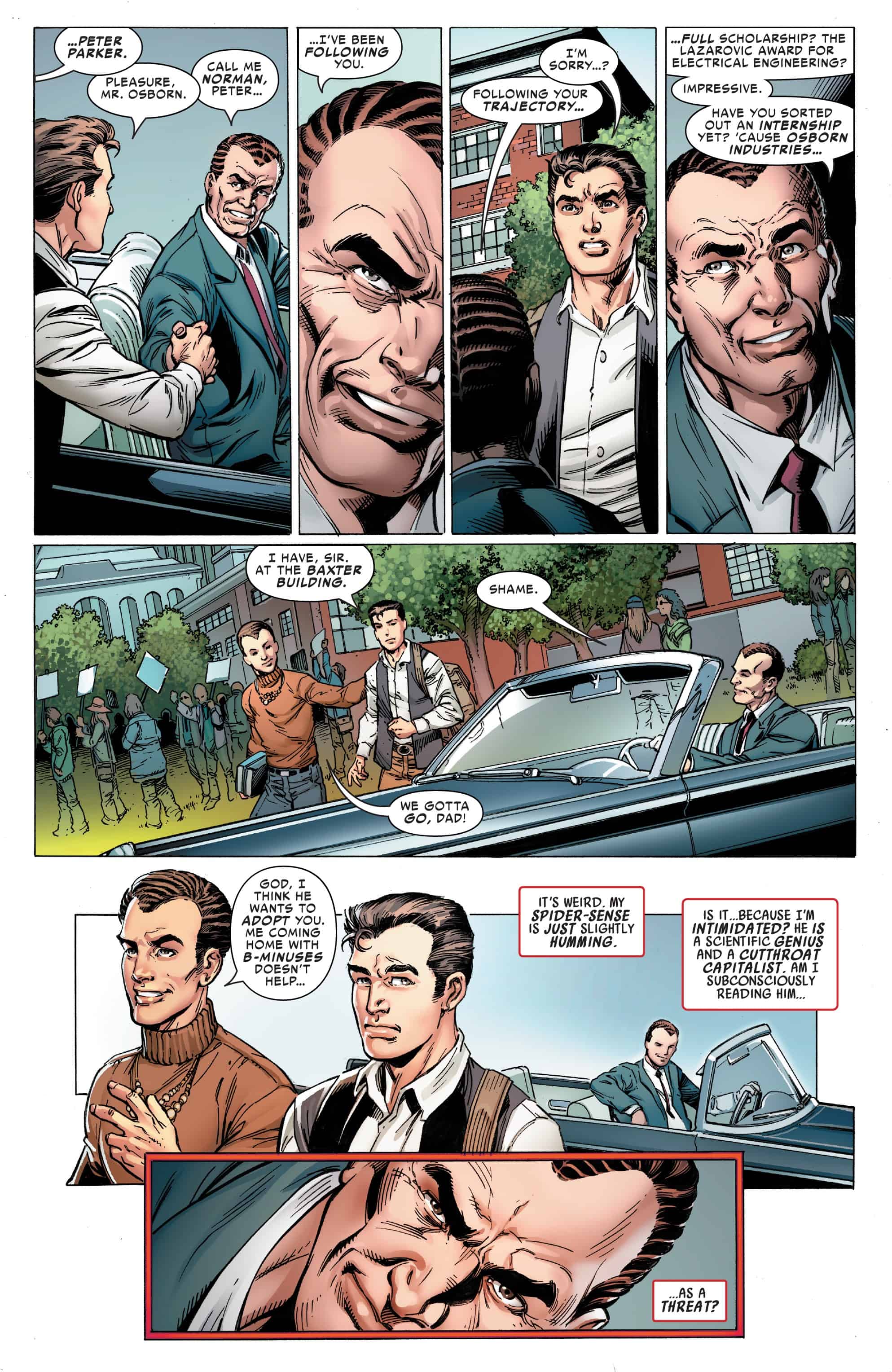 If you’re reading this review, you know or have guessed at the premise: What If Spider-Man lived in something like the real world? Each issue will focus on one decade, starting in the 1960’s — four years after a young boy was bitten by a radioactive arachnid. Since this story is going to be spread out over six decades (culminating, it seems, with his death — let’s hope he does better than Beowulf) what we saw here was primarily set-up for what will be coming. This issue is largely focused on structure: telling a small, self-contained story which reveals insights into the lives, the quality, of the central characters before skipping forward down the path to see what will come from the decisions made now. 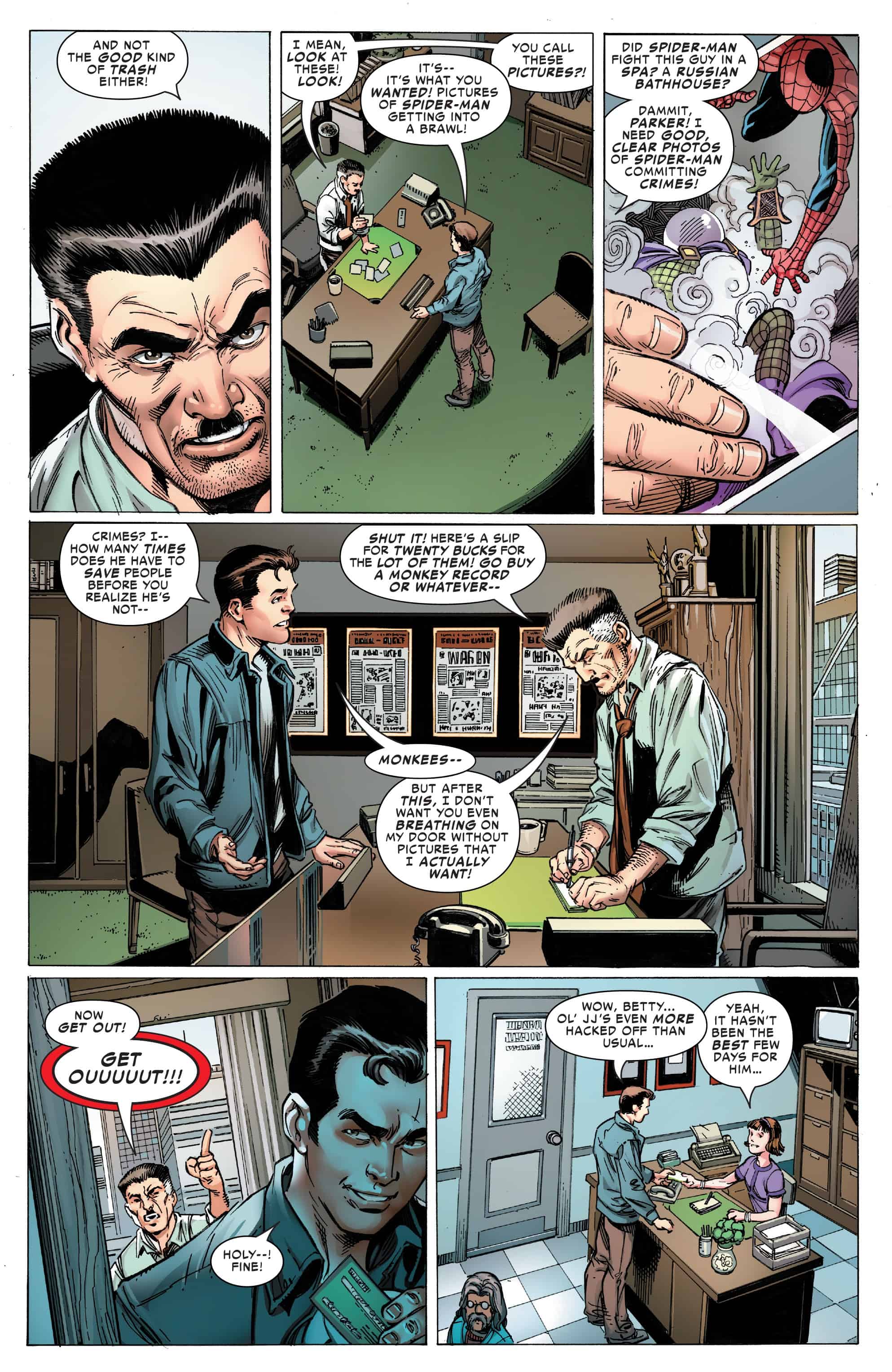 So, we see a Flash who has matured beyond a boy who’d been brutalized by a father who suffered from PTSD, and grown into a man with rough edges who, nevertheless, harbors a deep need for Honor without knowing that he’s about to walk into the worst kind of carnage when he joins the war in Vietnam.

We see Norman Osborne as a diurnal mind — a man whose secret desires are so inadmissible to his daylight self that, occasionally, the monster within him must rise from the mere to which it has been banished and wreak balancing havoc on the world within its grasp. 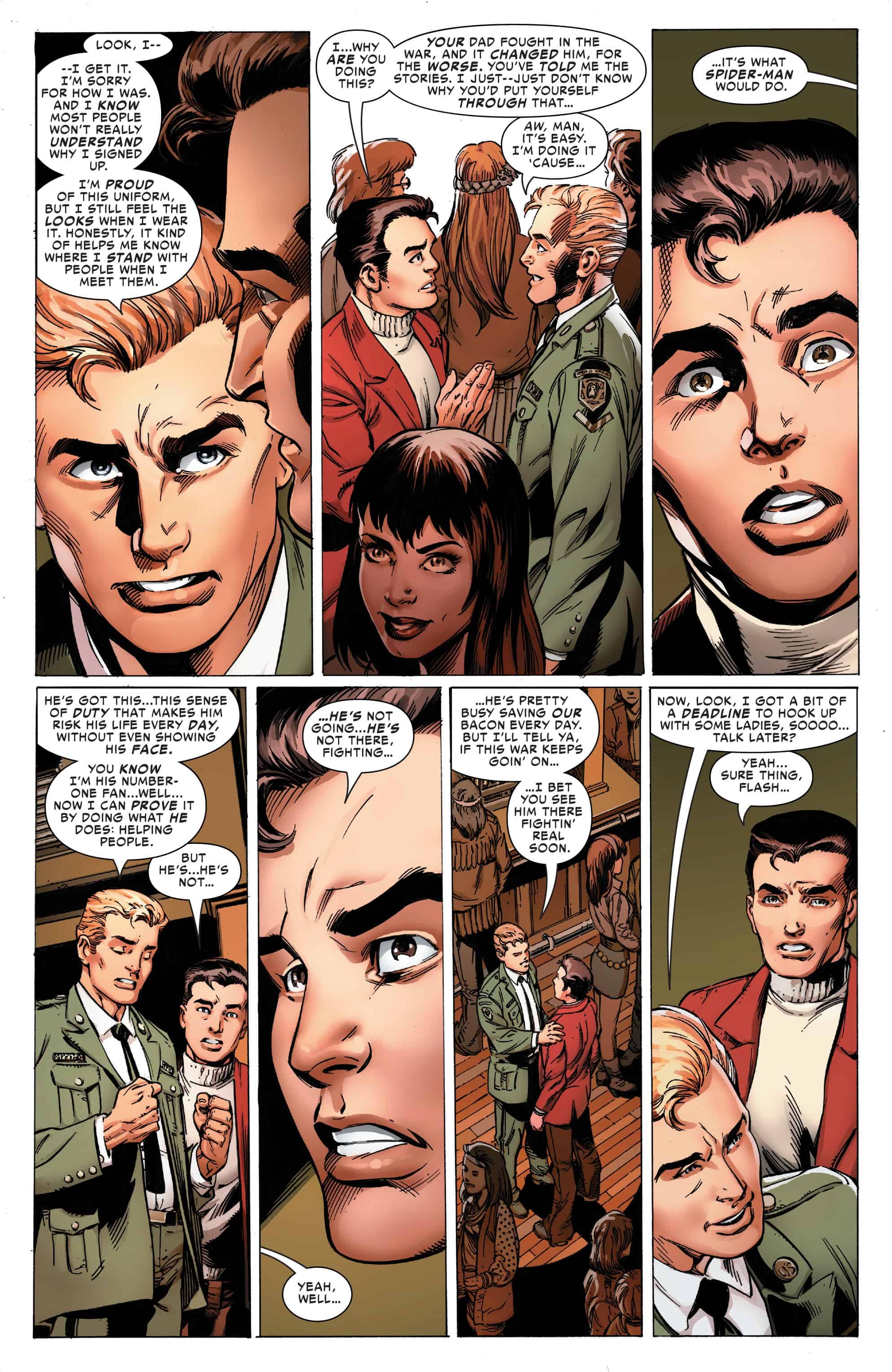 We see an Aunt May who is already sliding out the side-door into death.

We see Gwen alive and working in an environment which would probably like to reject her because of her sex.

We see Gwen. We watch as she, out of everyone, recognizes Peter for what he really is.

And even before this, we know that the crash is coming. 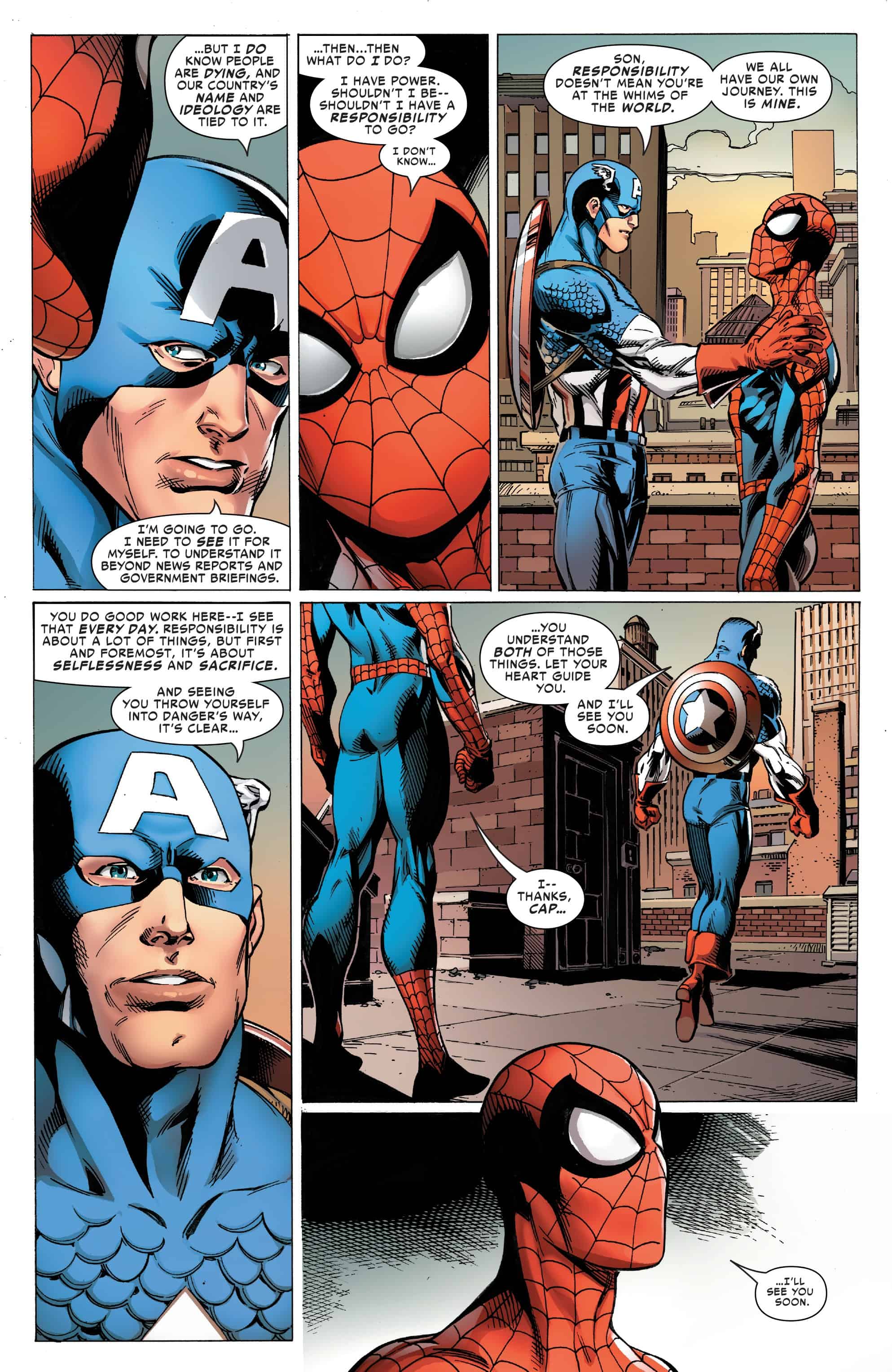 Captain America goes out into the trenches to see what the government is doing in the name of its citizens and we see him (in a lovely call-back to his 1970’s tenure as the Nomad) decide that the people who his government would have him destroy are really the embodiment of the ideals that his shield stands for.

We see J Jonah Jameson torn between his unspeakable rage and his unshakable, barely admitted compassion.

This series is going to be pretty complex, is what I’m saying.

The seeds of great themes have been sown already. Of course Tony Stark is a pro-war capitalist. Of course Peter is going to wrestle with the angel called Duty — what was he made for, what should he be doing; how can he best serve the people who need him? And this struggle will probably leave its thumb-print on his hip. But maybe it will also leave this perpetual boy with something resembling the shadow of wisdom. 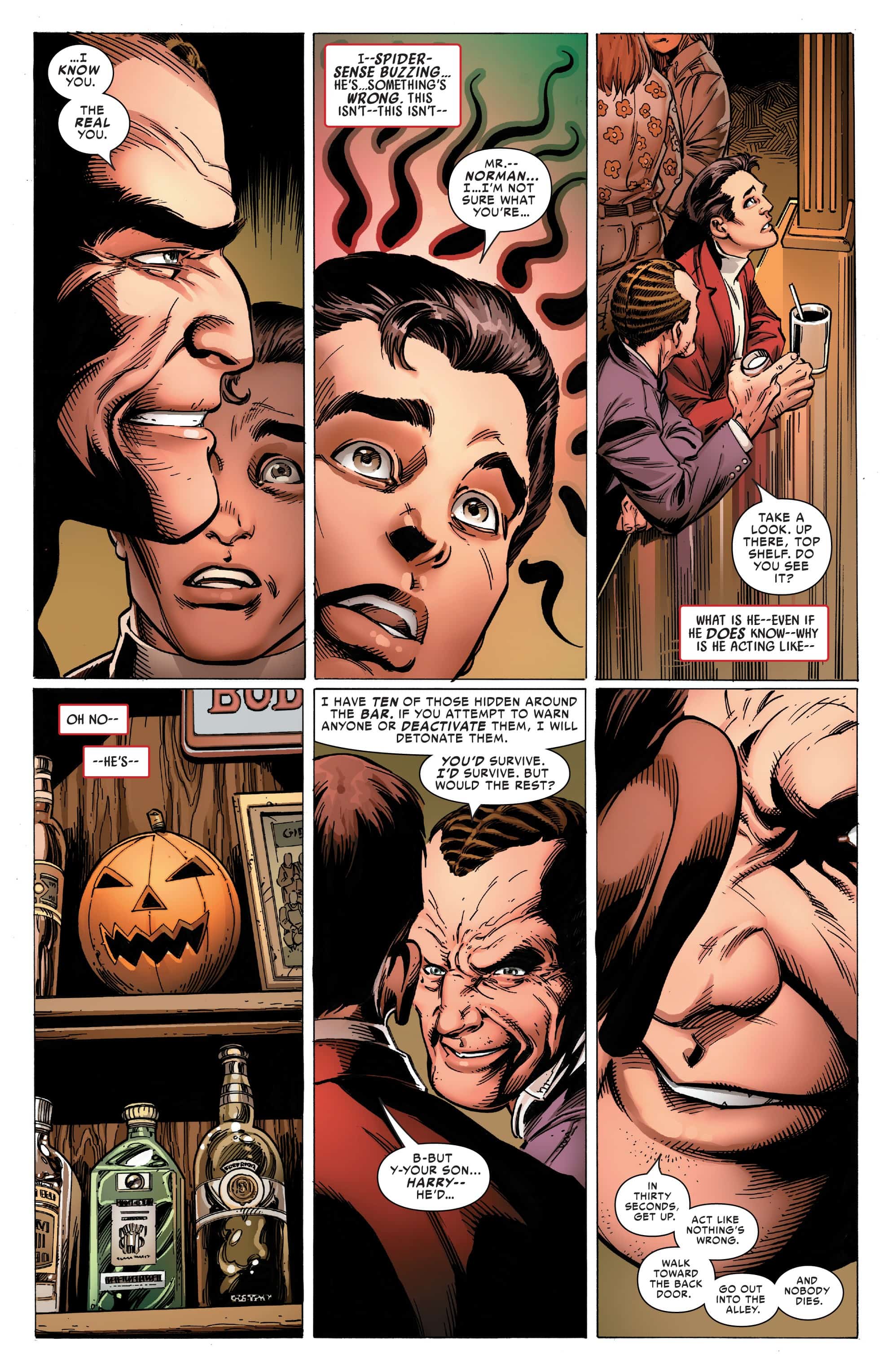 Or maybe not. This is Chip Zdarsky we’re talking about. He’s an odd duck with a preternatural sense for tracing the inevitabilities of character. I think that he knows what we all suspect: at the center of his being, Peter Parker is a failure. A glorious failure. A Noble and very American failure. But still, essentially, the man who cannot see that the lives of his children and the love of his wife should take priority over the continued existence of his ageing aunt. He is a man who would choose to remain a child forever. And that is his curse.

This series is going to end, as everything that is rooted in the river of time inevitably must, with enough tears for everyone.

I, for one, am unreasonably excited about it.

Before I close: a word on the art. 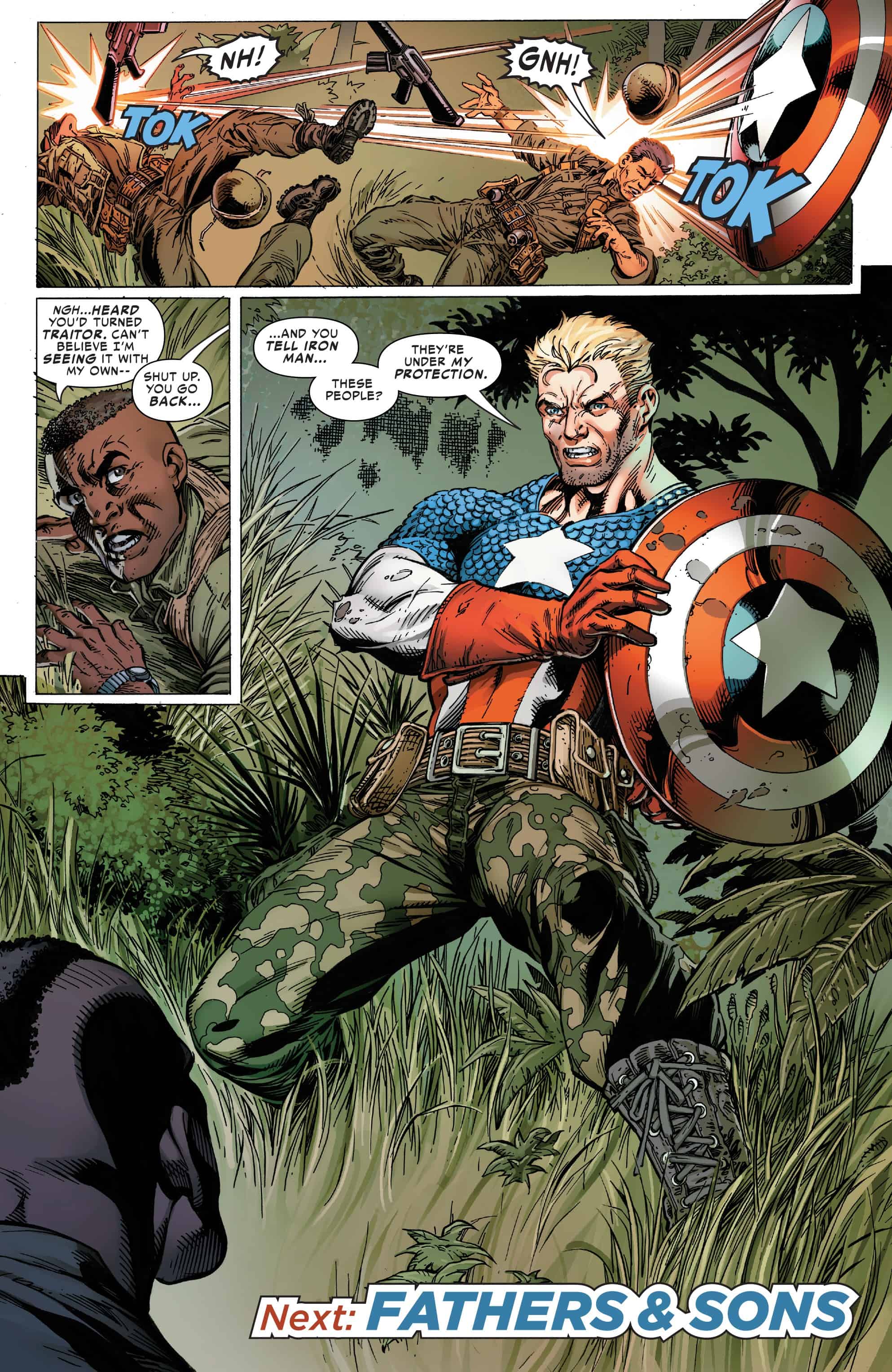 I am of two minds about its effectiveness. The lines are very clean. The images are clear, in an unshowy style which recalls the character’s designs as they were at their inception, without looking anything but up-to-the-minute modern. This is good because there are so many details required by the script that anything less would probably lead to the loss of something necessary. However, the line-work is so unchancy that it risks being bland. It’s so contemporary (without the timelessness that blooms from the risks of experimentation) that it will probably age badly. And that’s a pity.

But maybe, just maybe, that’s also part of the point. Maybe this is really a transient, just-for-now story. Because, you know, that’s the other side of the art. The Cape Books are something that we feed on every week, like another kind of mythic food (sometimes offered in church) and feel satisfied with, refreshed, or frightened by, until the next weekly re-set to the safe status quo.

Marvel is hitting it out of the park with their stories, just lately. This one is certainly a mini series that you’ll want to watch.

Marvel is hitting it out of the park with their stories, just lately. This one is certainly a mini series that you'll want to watch.

Spider-Man: Life Story #1: In My End Is My Beginning