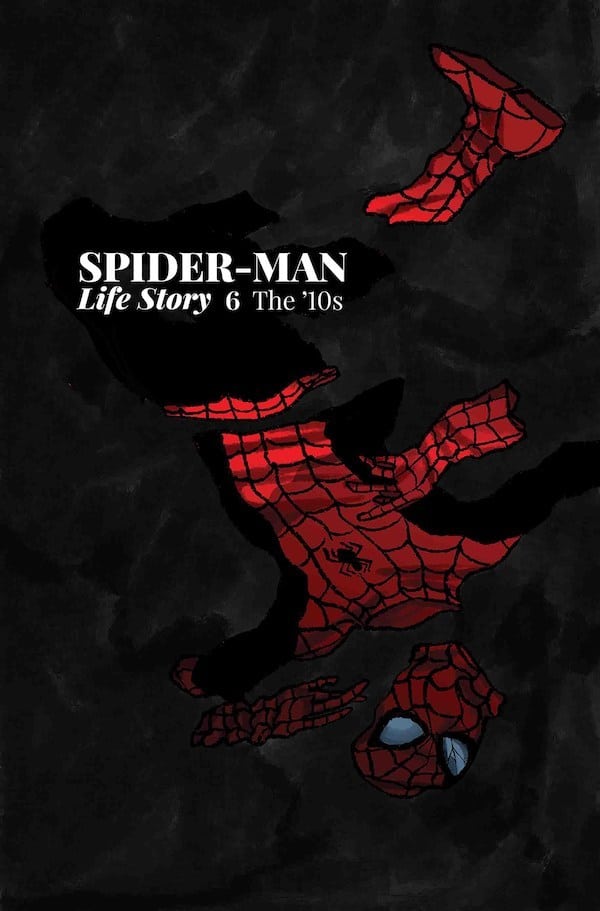 The results of the superhero Civil War play out in a conflict on the moon, while Peter learns one last, essential, lesson about his own nature.

The second I saw Miles appear (as a man in his early twenties) I let out a little cheer. The way that he is used in this final issue is deeply satisfying and contributes, in an effective way, to the conclusion of the series. The framework of this issue built on the groundwork of the previous installments in a realistic (for a cape-book) way. The civil war sparked by Stark’s Hero Registration Act left the floor open for Doom’s stable (if scarily Trump-reminicent) rule and that, in turn, has left the earth in peril. 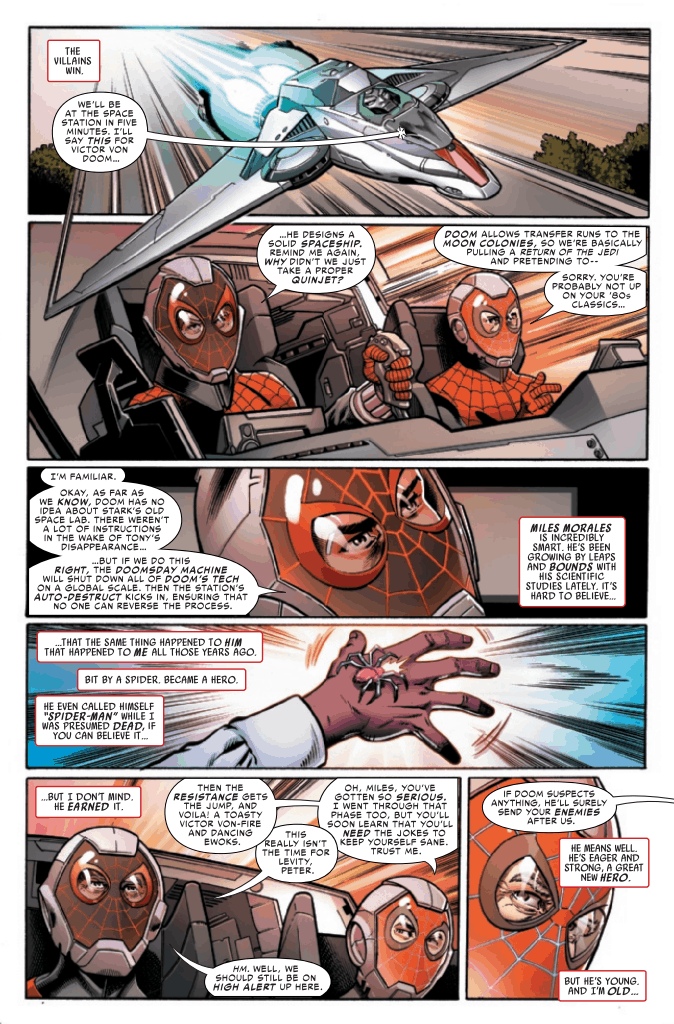 In a last-gasp effort to postpone the apocalypse (we only saw a fragment of Earth, but the cracked pavements and decayed buildings sure set the tone) Peter has teamed up with Miles and donned the red one last time in the hopes of triggering the self-destruct sequence on Doom’s moon base. It’s all very Golden Age, in terms of peril, but the real action (as always) is internal. The real question at the heart of this thesis has always been: is Peter Parker capable of change? The only reason that he has carried on as a hero is because he’s trying to undo a moment (Ben’s death) which can never be undone. This indicates a deep-rooted incapacity for personal growth — regardless of the good he’s done as a hero. And that incapacity, that stuntedness, has affected his life in all of the predictable ways. 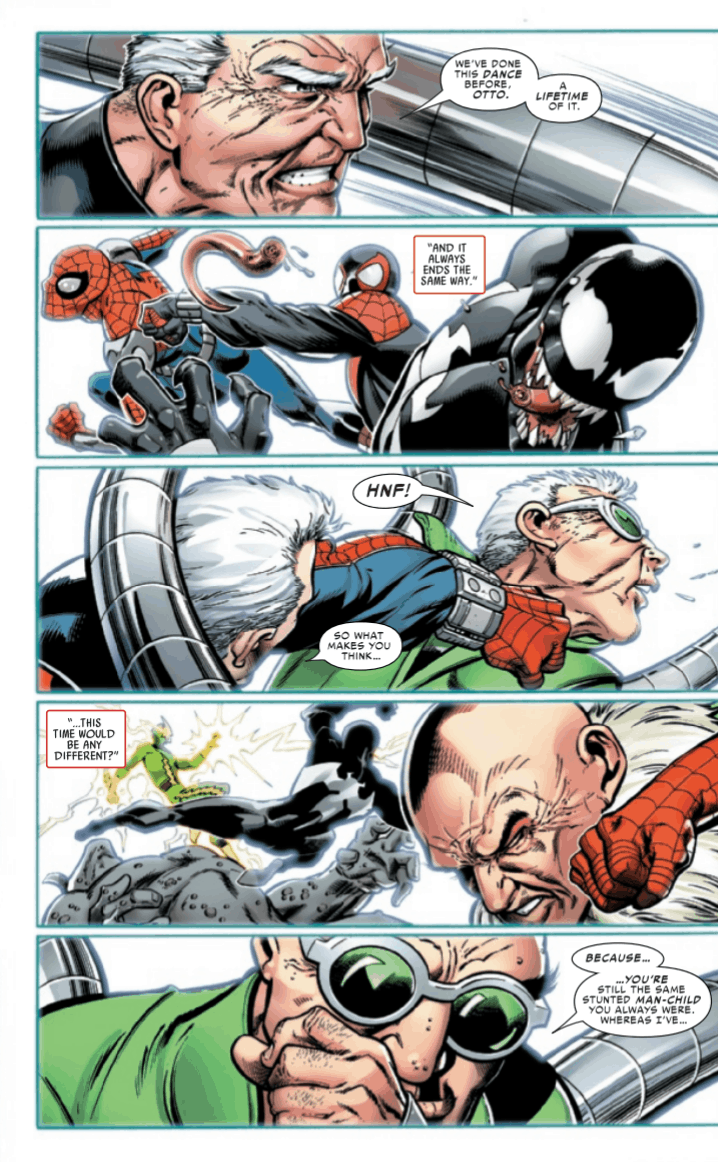 But, it turns out, that there is a third option available. Pete doesn’t have to give up the spandex in order to grow as a person. He can (and it turns out that he does) accept that this part of him is static, go with it, and allow himself to gain wisdom in other areas. And it is through the auspices of three figures from his own (dead) past that he figures this out. 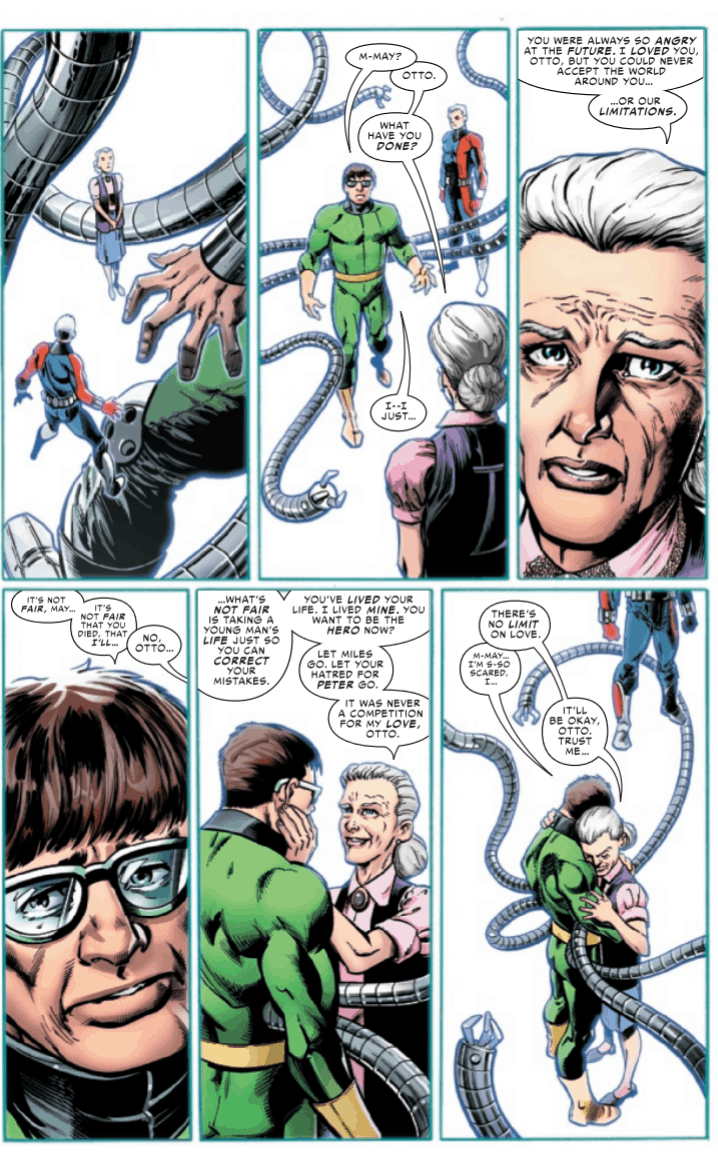 And of course, being who he is, he spreads that message on to someone else before he goes.

Now, this doesn’t mean that the book is nothing but a prolonged internal monologue (it’s actually a dialogue — that’s a joke, you’ll get it later.) and there’s plenty of beautiful action spread throughout the text (done in Bagley’s expert hand) that will leave you longing for more. Seriously, this series could have been six issues longer and I still wouldn’t be sick of it. I’m frankly longing to see the Iron Man or X-Men version. 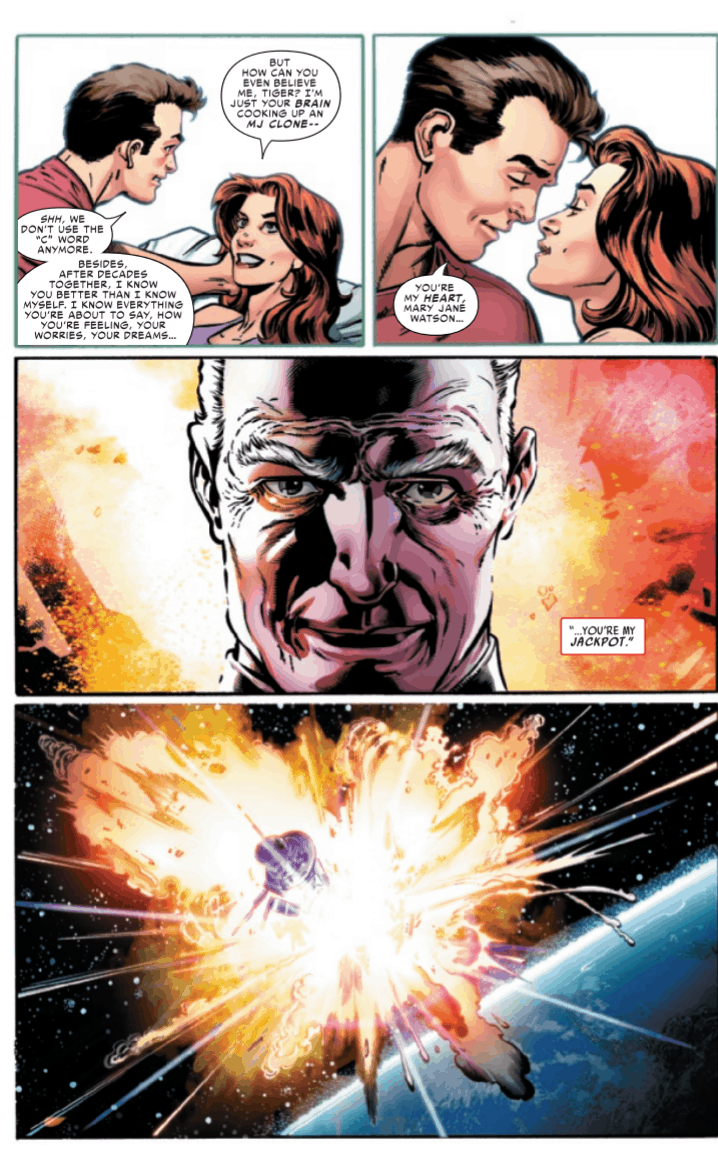 But all good things have to end, as they say, and since that’s the case I’m happy to report that this good thing ended in the best way possible.

Spider-Man: Life Story comes to an end with a deeply touching, beautifully executed book that will leave every fan absolutely exalted and more than a little teary. Pick this one up.