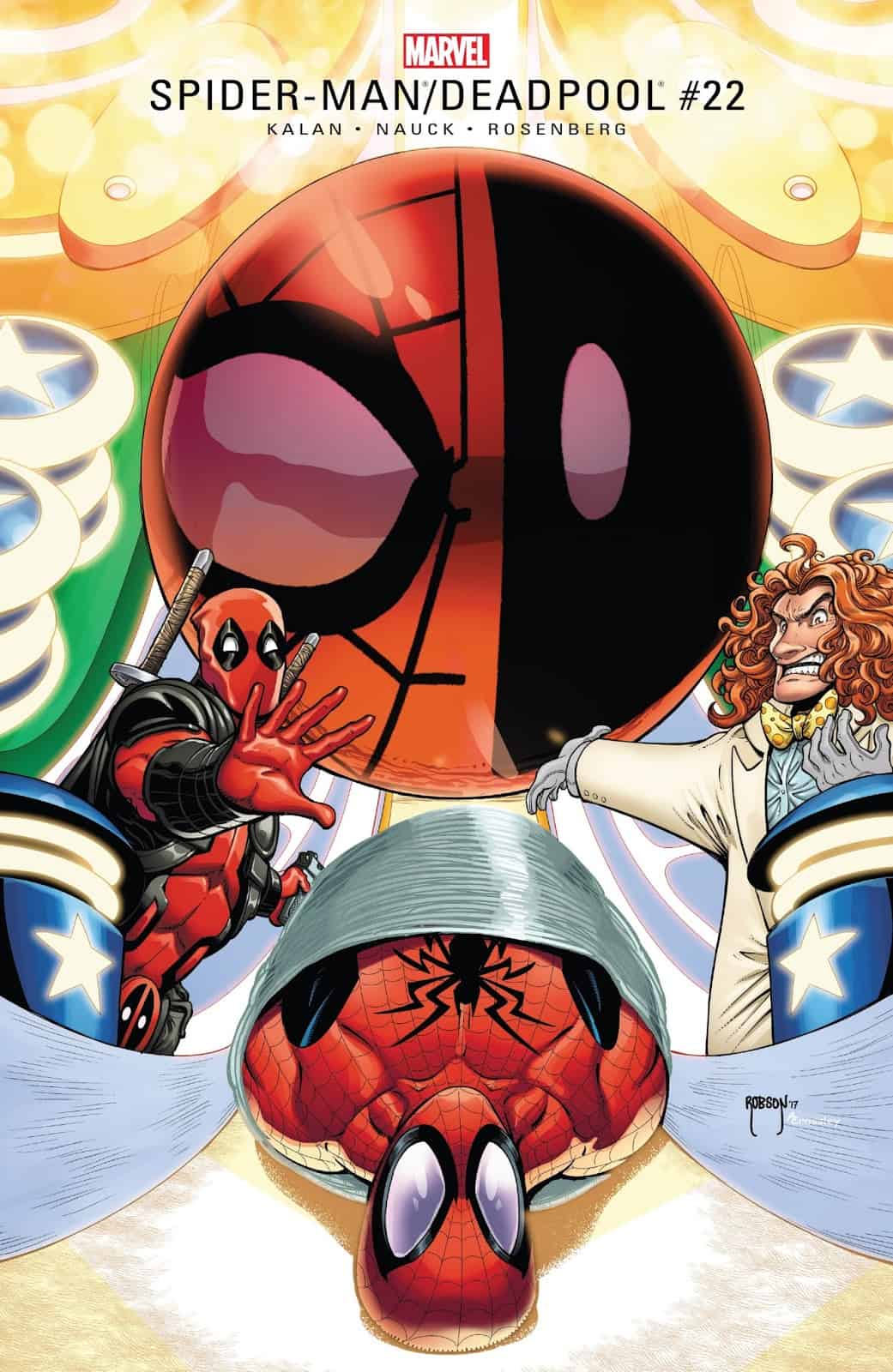 Spider-Pool visits Murder World Part 2, a kill-or-be-killed amusement park run by the murderous psycho Arcade. Spider-Man fights to break the rules and get everyone out alive, with Deadpool surprisingly supporting his pal’s plan.

We have one of Marvel’s booming Bromances here for you. Deadpool thinks Spider-Man is one of the best heroes out there and there is a major man crush happening. Spidey doesn’t exactly agree with Wade’s methods and tries to change the murdering merc. At times it’s been working too. But we’ve also seen the Spider head down a path of crossing the line that he has made in the sand for so many years. They are the Yin to each other’s Yang, the Chimi to each others Changa, they are Spider-Pool.

The last issue saw Deadpool (and Spider-Man) visiting Murder World. Run by everyone’s favorite deranged clown, Arcade. Things were going so well, but his dreams quickly fell to ash, as Arcade turned him from spectator to participant. Looks like someone just made Deadpool’s naughty list

Our opening recap features art by Ed McGuinness (former artist for the series) and Jason Keith. Deadpool explains he has fulfilled a lifelong dream of visiting the most dangerous theme park on earth, Murder World. Run by the insane game master Arcade. This time opening up shop where else, but Madripoor, a city in which crime and murder are legitimate business strategies. But in the process, he had Spidey kidnapped and used as one of the contestants.

Arcade ponders with his lackey about the merits of a game, being an intrinsic part of human interaction. Moves are influenced by their predecessors and the rules of the game are paramount until they are not.

We find Deadpool going from spectator in the previous issue to participant in the Murder World game of death. He joins Spider-Man, who is living his code and protecting the other three players, even though they are terrible people and most likely deserve a grizzly fate.

Arcade explains that he merely needed some ‘schmucks’ to test his new arena on and these guys are it. Deadpool fires back with a few quips and some unintended innuendo, while Spider-Man points out the incoming squadron of Japanese fighter planes. As the fighters reign down bullets on our heroes, Arcade gives a history lesson about the battle of Madripoor in 1942. But never fear, Deadpool handles the situation in only a manner that he can. He borrows a web-shooter and commandeers a fighter plane to take out the rest. 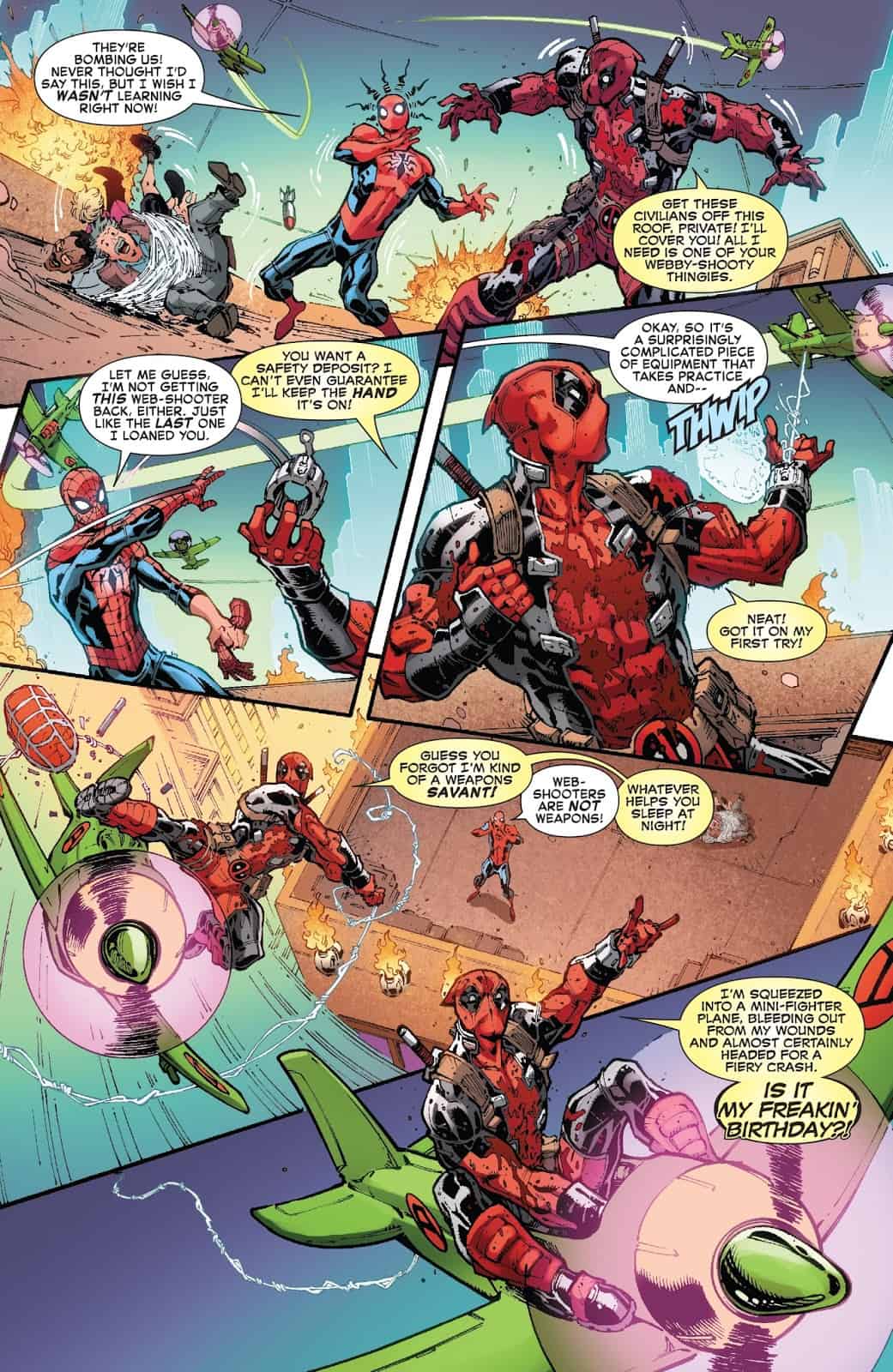 The games not over yet though, as Arcade introduces the next obstacle, a T-Rex. With Spidey stuck in the beast’s jaws, Deadpool kamikaze’s his ride into the robotic reptile to save his buddy. With that, Arcade brings in the finisher, a tidal wave filling the park with water. While Spider-Man is still trapped, Deadpool’s conscience kicks in and he saves the helpless jerk squad from drowning.

Getting the group to a somewhat safer place, they take the fight to the bad guy, Arcade states that he has always upgraded his games and tech, but this time he has upgraded himself. He transforms into a gargantuan hulking man with Deadpool commenting… 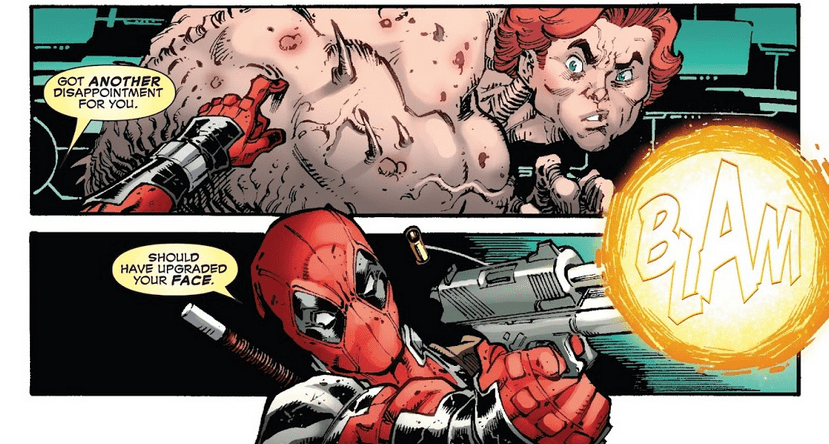 From here we discover it’s just another robot and they find the real Arcade operating it from close by. The pair decides to leave a webbed up Arcade in the hands of the time-displaced X-Men (being in the neighborhood and feeling he is more their problem). A young Scott Summers doesn’t even know who he is, let alone what to do with him. And with that, our heroes are on a plane back to their home ground.

I was really sad to see the creative team of Joe Kelly and Ed McGuinness leave this book a few issues ago, Kelly has an amazing talent for fostering relationships. Plus he knows the right kind of crazy to give Deadpool. Kalan has stepped up to the challenge though, with got a good amount of banter running between the duo and the right level of nuts dialed in for Mr. Wilson.

Straight up, we get a Star Wars reference on whether robots can cough and Deadpool mentions General Grievous (See The Clone Wars animated series). Spider-Man reminds him that technically he was a cyborg, not a robot. All this banter goes on with complete disregard for their deadly surroundings. Arcade angrily interrupts their “nerdgument” to remind them of their impending demise. It’s not quite a fourth wall break but still, makes the characters more relatable to the fan-base by referencing real-world pop-culture. Further quips like calling Arcade ‘Cadey Perry and his rant while riding the fighter plane are also on the money for Deadpool.

With a new writer coming in next issue, it felt like more of an “Adventures of” story. Sure it developed over two issues, but there is still no opportunity for the writer to develop some deeper and ongoing plot-lines. Don’t get me wrong, there is still skill in writing a self-contained one or two issue story and Kalan has done a good job to fill in for what will hopefully be the next long-term writer for the series. As we saw with Kelly’s run, he got to develop a more complex narrative over multiple issues, held together by underlying themes.

The main theme that Kalan focused on in this story was Spider-Man’s feeling of responsibility to save everyone, regardless of whether you felt like they deserved to be. That is a core trait of Peter, he does what should be done, not just what most people would do. He’s one of the straightest shooting, most honest heroes you will find out there.

We see that influence Deadpool, that’s where the man crush comes from. His motivational wristband seen this issue, W W (insert Spidey head) D (What Would Spidey Do). Where on his own, Deadpool possibly would have put a bullet in the three unlikable side characters. With Spider-Man around, he wants to be a better person. And that’s not an easy thing for Wade. That seems to be one of the underlying themes throughout this series and had we not had that in this issue, it would have felt out of place. Just another team up story where no one gained or earned anything.

The art was an improvement over the previous fill-in team for issue #20 of Robson, Hannah, and Boyd as artist, inker and colorist respectively. Their style was too soft and cartoony (possibly for having Slapstick, a cartoonish character as the villain). Todd Nauck and Rochelle Rosenberg get the rich detail and colors needed. And while a few pages look a bit flat, for most of the issue Rosenberg uses lighting and shadow to give the art depth and life. The lettering is a bit hit and miss, some parts quality, some parts look rushed. All these examples come from the one page. The first has just the right amount of white space around the dialogue that we want, but the tail is a bit short. The second example sees the type actually breaking out of the speech bubble, this takes extra time and effort to show the expression in their words. The third has a bit too much white space around it, but if you are going to do it that way, you keep it consistent through the book. Plus the tail is far too long and unnecessary.

Final Thought: As a filler issue, it works, but it’s almost exactly what you’d expect if you were given a short synopsis of the story. It’s a tiny bit predictable, but at the same time, just what you would want to read. Hopefully, we will see a new more permanent creative team that can develop some more meaningful stories for the pair.