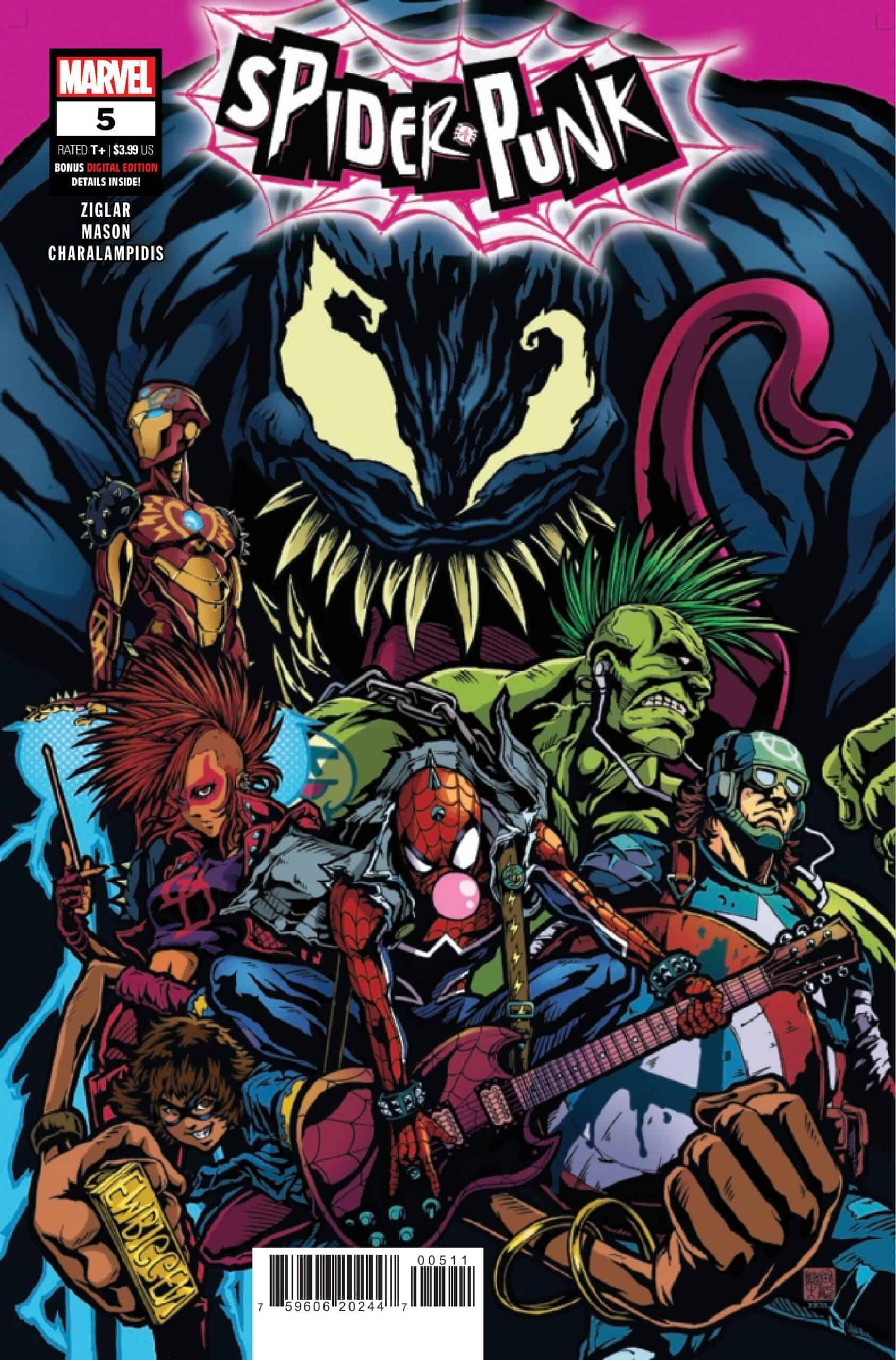 Previously, Hobie Brown, A.K.A. Spider-Punk, smashed his guitar into the skull of the villainously Venomized Norman Osborn, the president of the U.S. of A....but that didn’t stick. Hobie and the Spider-Band thought they'd gotten the upper hand on Norman Osborn and his crew, but it looks like the Spider-Band was led right to their own execution!

With a character like Spider-Punk, it would be all too easy to treat him as a joke akin to Spider-Ham (the pig), Spiders-Man (a bunch of spiders), or Pter Ptarker (the T-rex). He could simply be a teen that generically “sticks it to the man” and incorrectly quotes punk rock songs. And while he does a smidge of song quoting, Spider-Punk’s writers and artists continue to make Hobie so much more than a gag. 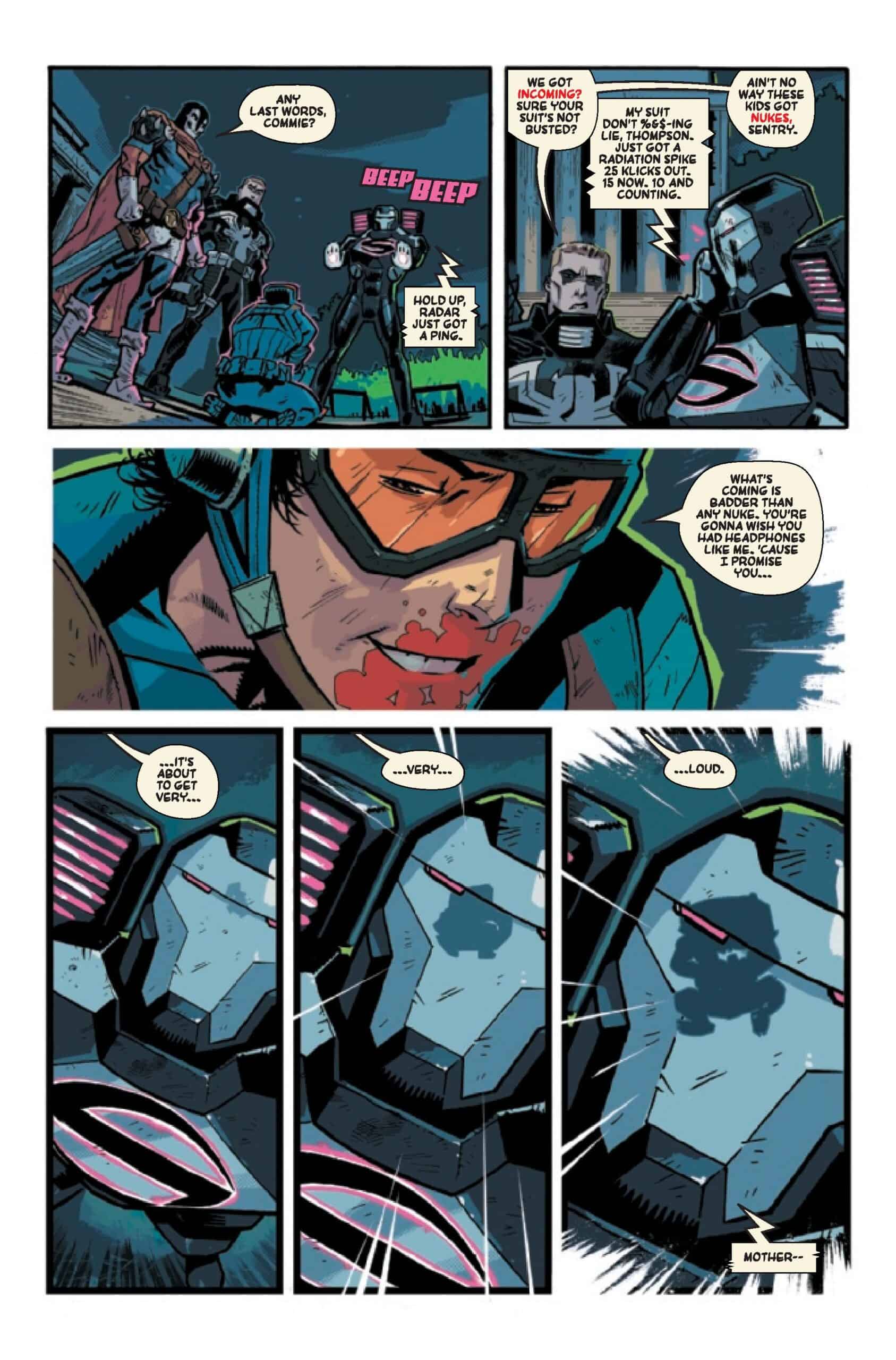 Personally, I’d posit something created by the dominant culture can’t, by its very nature, be part of counterculture. Nonetheless, Spider-Punk certainly pushes the boundaries. Along with Defenders: Beyond, this series has been one of Marvel’s most visually inventive comics of the last six months. One previous issue notably included a landscape-formatted page showing a building break-in, while this issue includes both a splash page in landscape format and a gobsmacking six-page spread. It’s a reading experience best enjoyed in print, as it doesn’t translate well to digital. Justin Mason’s artwork is dynamic and leans into gritty, textured linework that feels refreshingly at odds with the crisp cleanliness of most mainstream superhero comics. Mason’s artwork is taken to an entirely new level by the series’ colorist, Jim Charalampidis: hot pinks and acid greens pack a punch, while visible brushstrokes and patchy screentone lend a sense of raw, faux unfinished-ness. 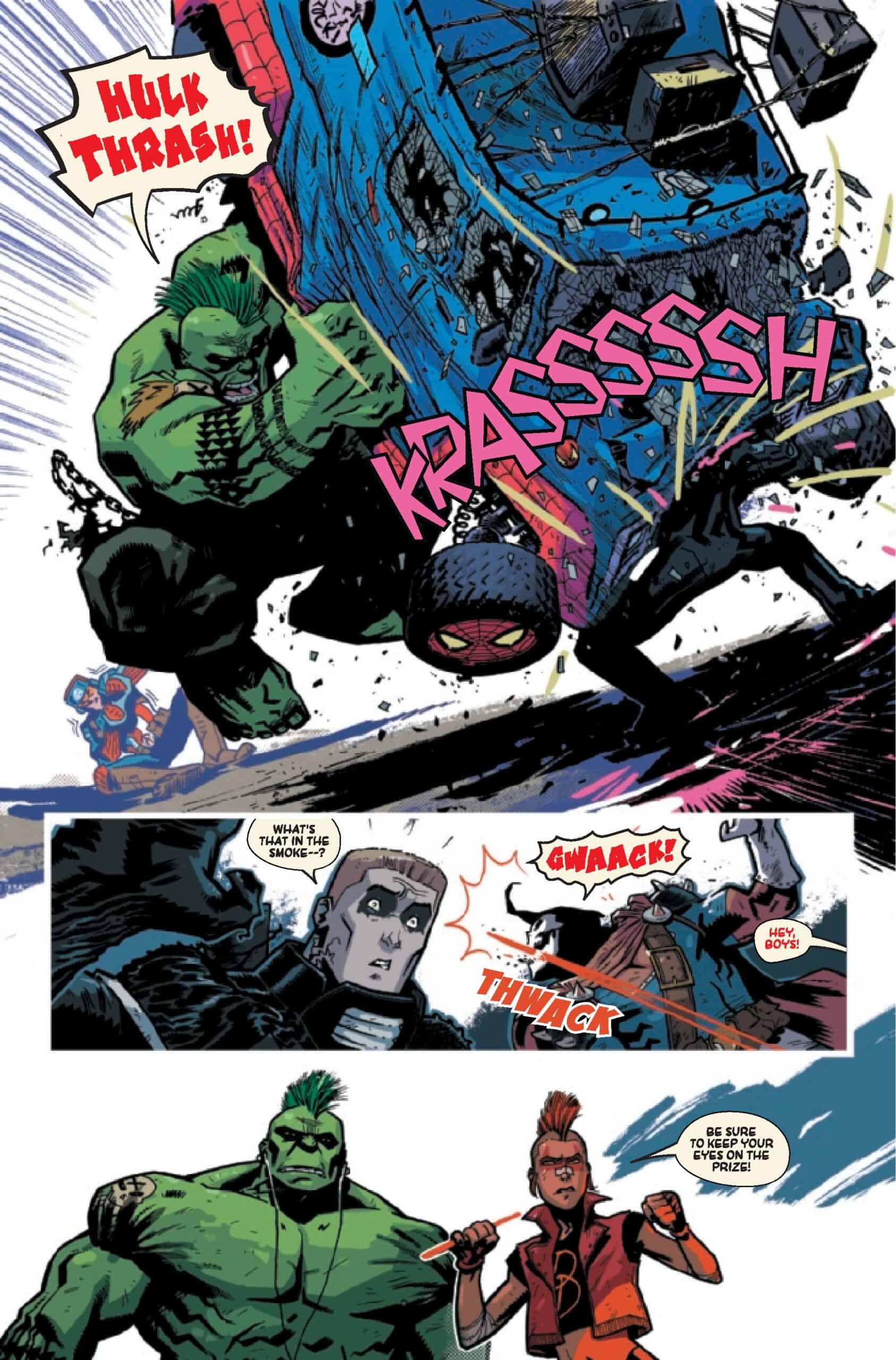 While visually inventive, Spider-Punk is nonetheless narratively formulaic. It concludes, rather unsurprisingly, with a Big Fight in its final issue after the team’s apparent defeat at the end of the previous installment. That said, it’s still a joy to read, with writer Cody Ziglar making several creative but reasoned changes to this universe’s characters, not only making Captain Anarchy Native American (which he wasn’t in previous Spider-Punk outings) and making Daredevil a female drummer, but combining already Venom-ized Norman Osborn with Arnim Zola (doubling down on Osborn being a fascist, but also just fun). And even if Ziglar’s narrative structure feels a bit paint-by-number, this comic nonetheless stands out from Marvel’s (and DC’s) other superhero comics by placing the story of a group of marginalized teens (one disabled character, one queer character, and all POC) front and center in the fight against fascism. It crucially never frames sympathy for your oppressors as the solution, instead stressing the importance of community solidarity. Combining a strong message with equally strong art, it’s a fierce and hopeful read. Hopefully, Marvel will bring this creative team back for more Spider-Punk somewhere down the line.

Spider-Punk packs a visual and narrative punch, showing what it means not just to embrace your individuality but to build community in the face of fascism.