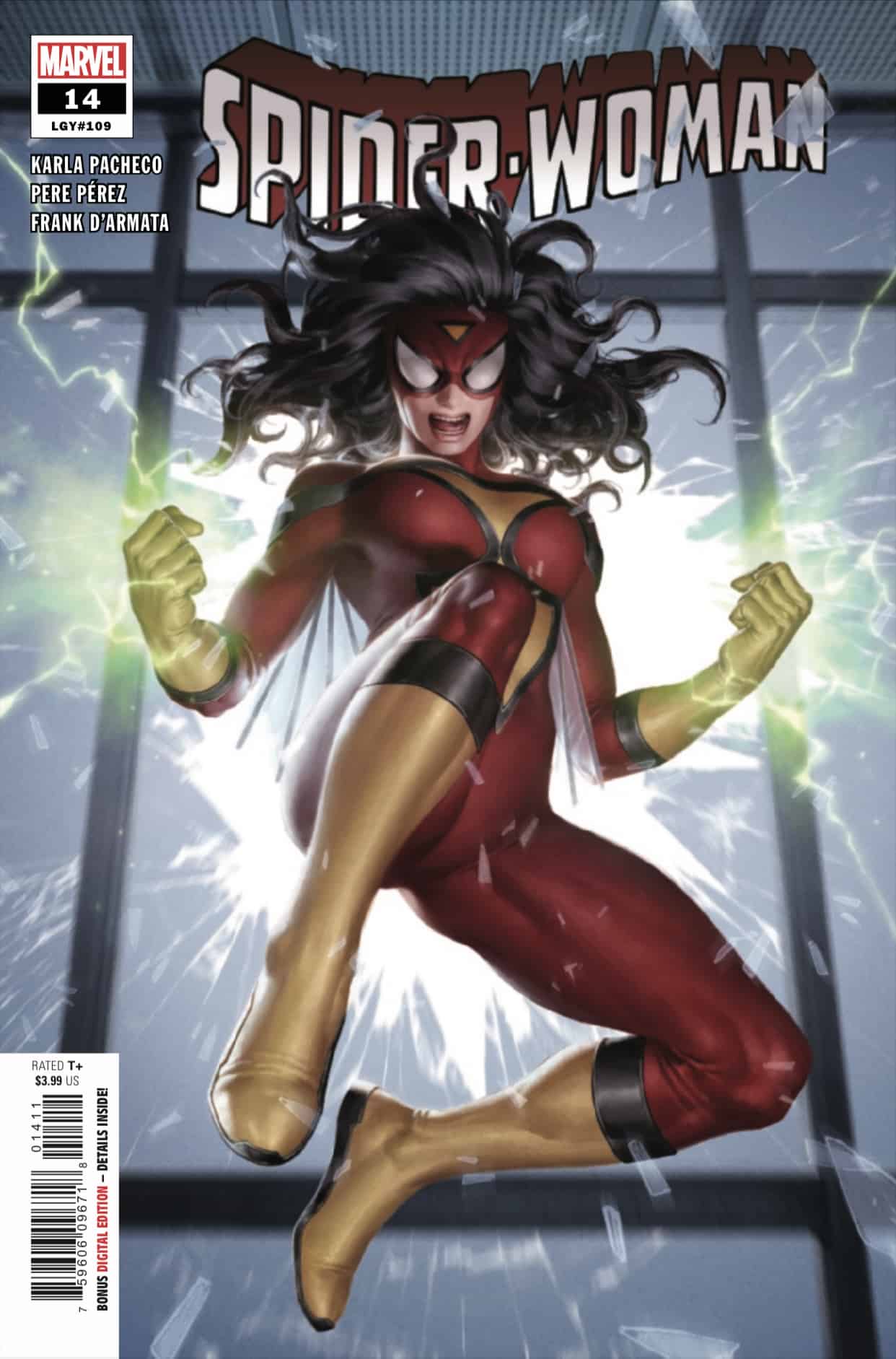 Did you think, just because there were some done-in-one crazy action issues, that this arc WASN'T SERIOUS?!?!?! You are WRONG, True Believer, as this issue picks up all the Keyser Soze clues we've been leaving around and slaps you in the face with them. All we can say without spoiling more is that Jessica Drew is in for the fight of her life and you do not want to miss it!

We’re back with the Lindsay McCabe show, and we’re just living in it. Jess discovers that her brother and his new boo, and assistant, Rosé Roché, and I am just living for her. She is pink from head to toe, and just a fierce glamazon, and she’s just everything. Take it from me, she’s going to be one to watch. Evidently she’s the one to blame for the shenanigans of last issue, and was the person who hired all of the z-listers to steal the High Evolutionary’s research of Jess’s biology and how she obtained her powers. He’s an a$$#*%€, and I’m hating him more with every issue. I hope that’s what Karla’s been going for, because it’s succeeding. Especially with the ending. What’s coming next? 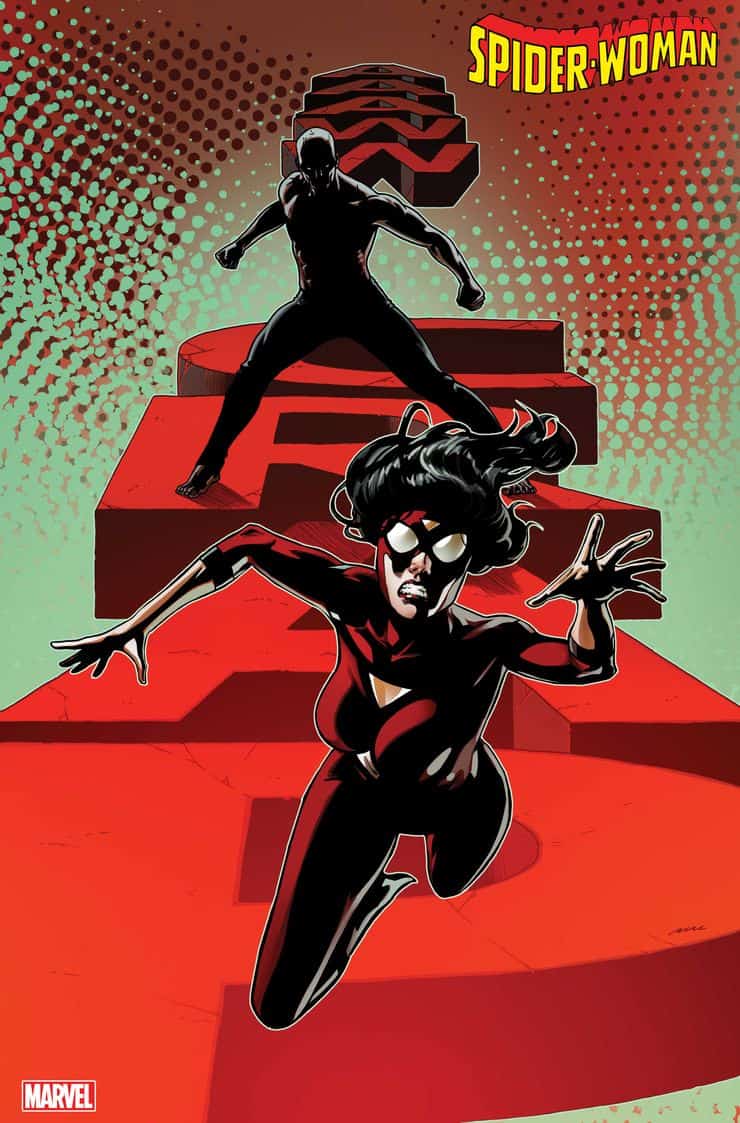 One thing that’s been a real boon to this series is Karla’s fearlessness in mixing up new villains, with a mix of older well known, and very obscure characters that a continuity buff like myself just skweeeeeeing over their appearance. I’m honestly hoping we’ll see the B.A.D. Girls (Black Mamba, Asp, and Diamondback from the Serpent Society) in this book more. I *hope my faithful readers will start an online campaign advocating to see these ladies. Another good point about this run is there’s always a cliffhanger leading into the next issue, and this technique is just so old school and I love it. I’m a glutton for kitsch, and nostalgia, and Karla’s hitting all my nerdrogenous zones. I feel like a broken record at this point, but it’s true. I’d kill for a breather issue once in awhile.  It won’t kill ya girl to just give us an issue of Jess dealing with the trials and tribulations of getting Gerry his vaccination shots. 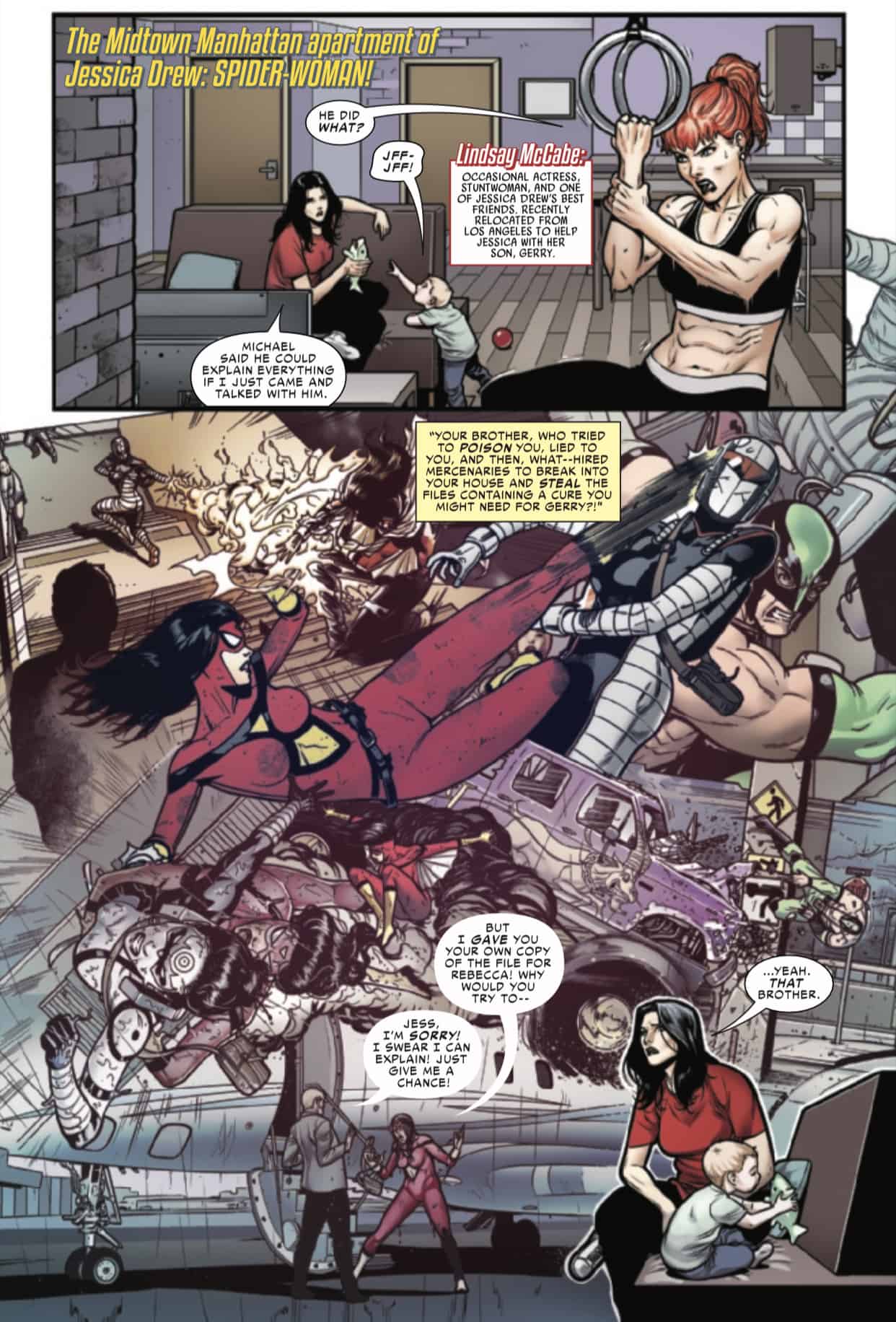 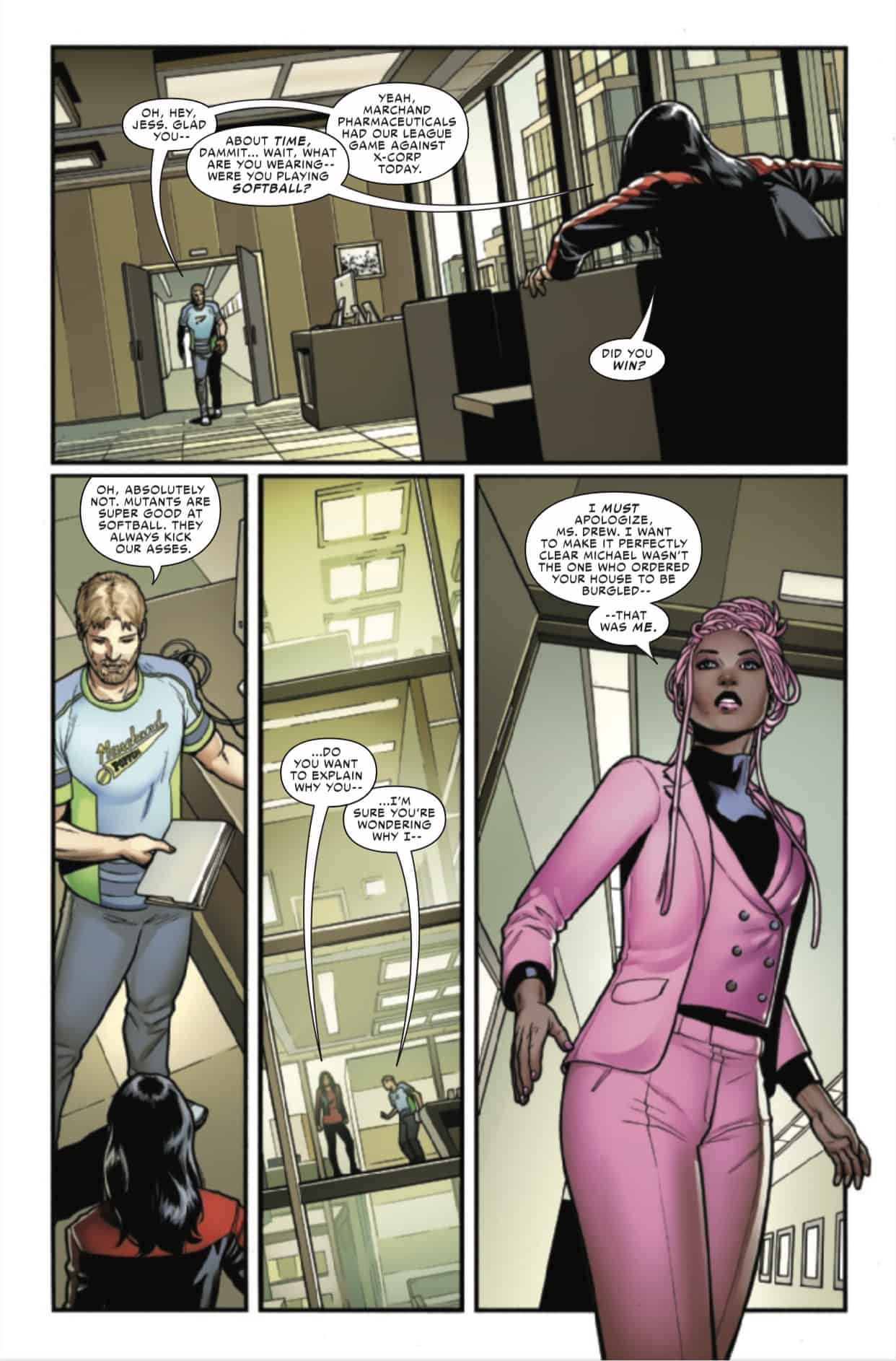 With another issue we get another display of just how amazingly talented Pere Perez and Frank D’Armata are. They give me life with every issue. Everything is exquisite to look at. Whether that’s Jessica convulsing on the floor, puking toxic venom, to Jess getting her back snapped by the Rhino, to the dream sequence from today’s issue, featuring Lindsay and co-starring Gerry. I don’t know if you’ve noticed, but I love Lindsay. I’ve loved Lindsay since her run as her original gal pal from the Claremont and Leiahola run from the early 80’s (warning: I’m not that old, I just have a lot of comics from before I was born). Perez draws her perfectly. She’s muscular, and has a build for anyone who is a professional stunt double. This attention to form and figure is just another reason I love this team. These aren’t just skinny twigs with legs up to their neck, and breasts the size of orbiting moons, but they look like what real women look like. I don’t think they get enough credit for what they bring to the table. 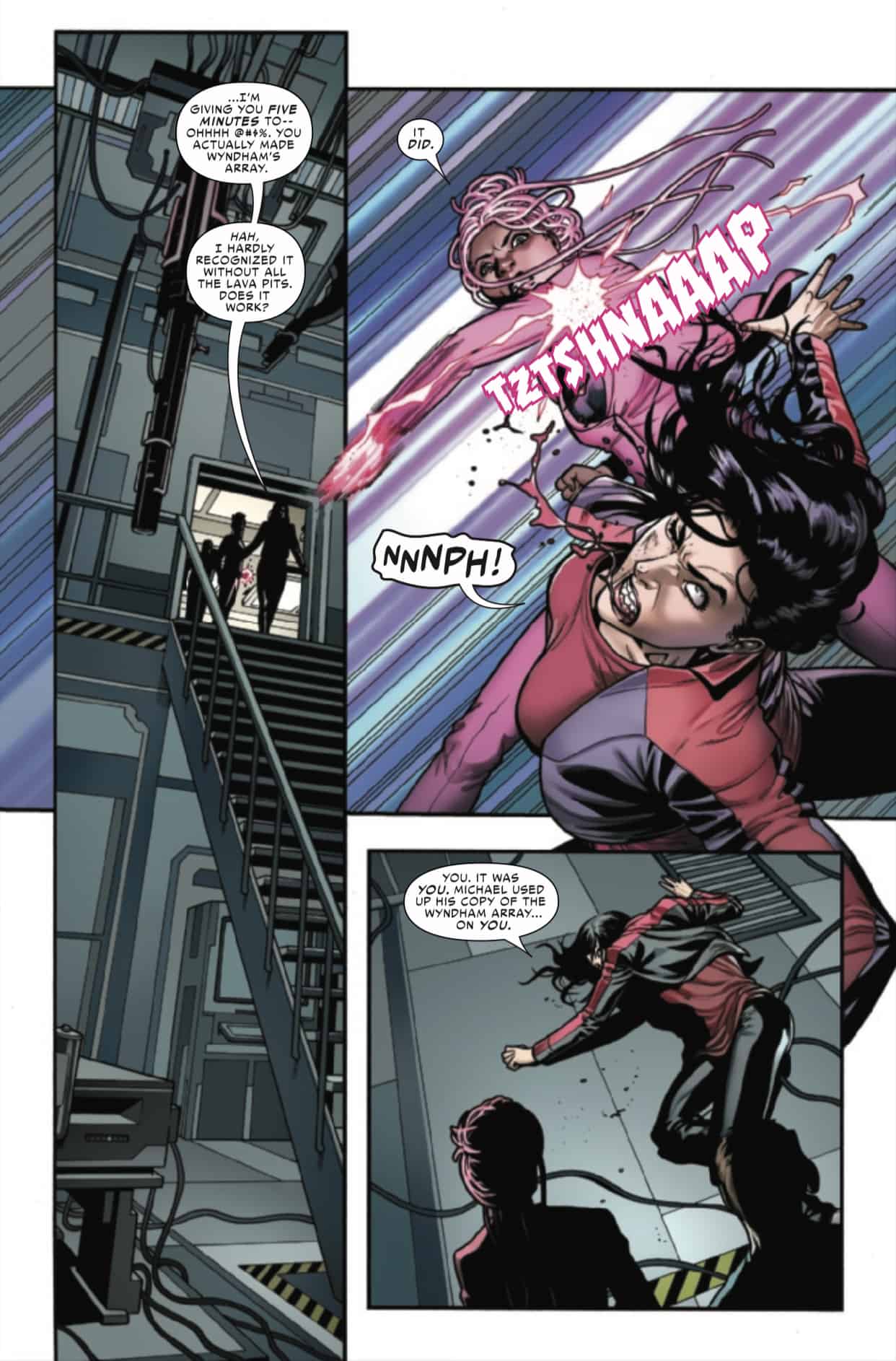 Sorry about all the extra images I included with this review, but it’s just too gorgeous not to share.

Breakneck speeds as we twist, turn, and kick some serious arse. Karla’s keeping Jessica as busy as possible, and puts her in some seriously fun situations. Unfortunately she’s not giving us the time to know who Karla’s Jessica is. She’s brash, abrasive, and balls to the wall, but I’d like to know how she feels about her friends.

...I wanna see what she’s like at a farmers market.