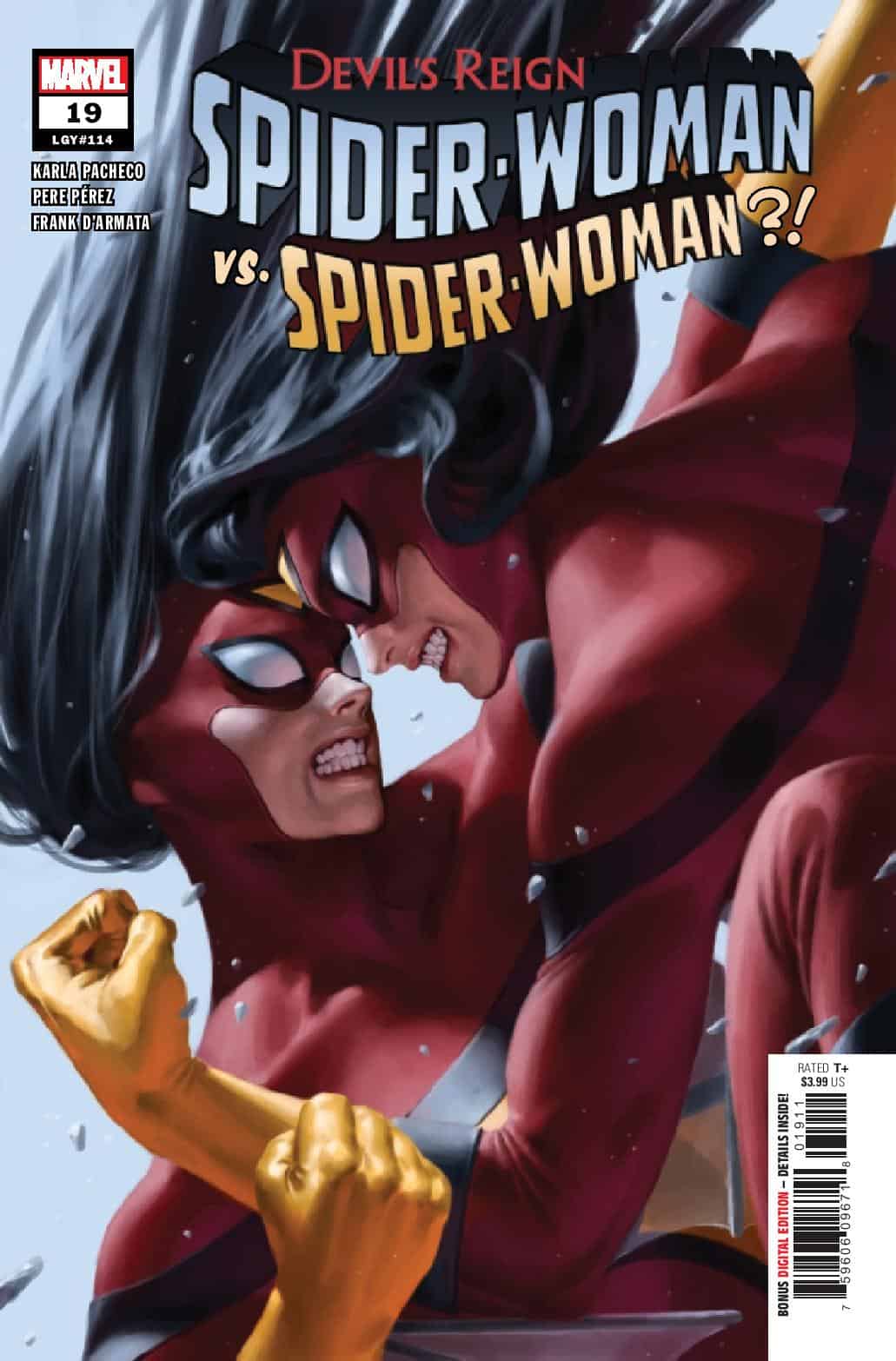 On this episode of “she is not the mother, she’s a Skrull imposter who nearly ruined everything in your life”, Jess comes face to her face with Veranke, the former Skrull empress who nearly took over the world and make Earth the new throne world of the Skrull empire (that’s a pretty fair assessment of Secret Invasion I should say. Correct me if I’m wrong). Veranke is working for Fisk as part of his program to hire the villains of the MU to take down the vigilante heroes (ie: Daredevil, Elekdevil, Cage, Spider-Woman, Moon Knight, etc.) to bring them to justice. Haven’t kept up with the main Devil’s Reign book because I review a lot of dang books! Just kidding. It’s just a time thing, but considering how much I’ve enjoyed Zdarsky’s Daredevil, it’s definitely a series I plan on getting to sooner rather than later.

Anyway, Veranke is definitely trying to wreck $&@# for Jess here, but it doesn’t seem to be working. The people closest to Jess can definitely tell which one is the real McCoy and I’m loving that Karla clearly points that out. Jess has made a lot of connections throughout the Marvel Universe since her reemergence during Bendis’s run on the Avengers franchise, and Karla plays it up quite nicely. She has a very unique take on Jess and her supporting cast, and it’s become one of the highlights of this run. Another highlight is how much humor she puts into every issue. The humor isn’t in the constantly cracking jokes like Peter Parker does, but she’s a complete and total spazz, and you can’t help but giggle at the situations Karla and Pere put her through. Plus Gerry, or Gerr bear, as he will affectionately be referred to from now on, was an absolute riot this whole issue. It’s such a fun, ridiculous, energetic ride that reminds you of that feeling you get when Pat Benatar comes on the radio. Fist pumping 80’s feminism to the nth degree.

Pere Perez and Frank D’Armata provide the art for this entire run, (that’s quite the accomplishment these days) with zero delays, and the art just gets better with every issue. They were already rocking a good 9 from the start, but as their run has continued, they’ve found their groove, and continue to impress me with each new issue they come out with. Someone whom I’ve forgotten to give their fair share of praise is Travis Latham. Man, he letters the sound effects to such a hilarious degree, that it adds so much to each panel. Bravo all around to these guys. Karla, Pere, Frank, and Travis pack so much heart and soul into each issue, you can’t help but fall in love with Jess and her world.

A tie-in that doesn’t feel like a tie-in, against Veranke, the one being in the universe who has hurt Jess harder than almost anyone else has, Karla, Pere, and the rest of the gang continues to put out one of the funniest books on the market. Jess has become the proverbial schlep for the Marvel Universe, and they’re using it to great comedic affect.