Spider-Woman's Rogues' Gallery has been slowly being pumped up over the last year and a half, and it's all led to this:

THE ANTI-ARACH-9 are here, and Jess and everyone she loves are in serious trouble!

Writer Karla Pacheco and artist Pere Perez pull out all the stops as they bring their two-year run on Spider-Woman to a close. To say that this run has been hindered by external issues is an understatement, as the creative team dealt not only with the typical intrusions of two editorially mandated crossover events, but also the industry-wide impact of a global pandemic. Despite all the obstacles presented, volume 7 of Spider-Woman never failed to deliver fast-paced, high-octane action, a quality that proved to be both its greatest strength and largest limitation.

The balancing of intense action sequences with smaller, character driven moments in Spider-Woman has been a reoccurring subject of criticism for me, as Pacheco’s writing often leaned too far into the former for my taste. Such is this case with issue #21, where twenty pages filled to the brim with nonstop punching and kicking are meant to serve as closure for this latest chapter in Jessica Drew’s life. The result is a disappointingly hollow finale with no real stakes or any true feeling of resolution.

What cannot be denied though, is the flawless expertise with which Pere Perez renders every brutal exchange between Jess and the team of villains that has formed to take her down. It is no easy feat to choreograph a fight involving ten combatants, but Perez pulls it off with style and fluidity that allows every hit to feel like it has weight behind it. Multiple double page spreads give a nice sense of scale to the crowded fight, and the constantly changing panel layouts keep things dynamic as you transition through the pages. It was only after my second reading that I noticed how Jess at one point leaps on top of the panel boxes. I’m certain that this is not the only fun visual detail to be found upon revisiting the issue. The incorporation of real fighting styles and techniques gives Jessica Drew’s movements a uniquely detailed quality that will be evident to any reader, even those with no knowledge of martial arts. 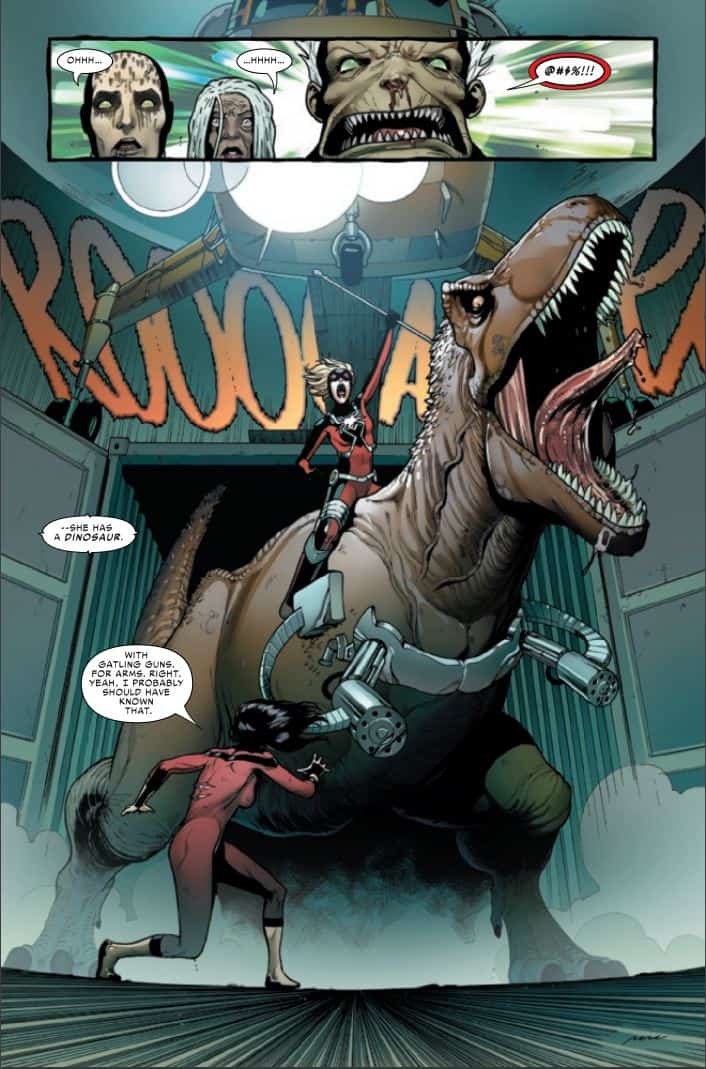 I acknowledge how arbitrary my complaint of excessive action may seem now, but the problem at hand is more about quantity over quality. The book’s villain of the week format has led to much repetition, and the finale’s failure to up the ante makes it indistinguishable from the previous few issues. It doesn’t help that most of villains recruited for the new Anti-Arach9 team are ones Jess has fought earlier in the run, in equally long and elaborate battles. Together, they only prove to be slightly more formidable, and with no other goals beside the vague desire for revenge, the Anti-Arach9 feel more like an inconvenience than a climactic threat.

This unsatisfactory ending is not fully the fault of the creative team, as it seems evident to me that Spider-Woman met its end prematurely. Since issue #17, Karla Pacheco has been planting seeds for a future storyline that would’ve seen Jess accompanying her friend Lindsay McCabe to Madripoor, an adventure that may now never be realized. It is very likely that Spider-Woman #21 was never intended to be the end, and that Pacheco was forced to course-correct her plans after a sudden cancellation.  Regardless, Spider-Woman #21 is a finale that maintains the high energy and speed of the previous issues, but consequently brings its narrative to a screeching halt rather than a graceful end.

Spider-Woman #21 wraps up the series with an action-packed and incredibly humorous issue that will satisfy those looking for epic super-powered beatdowns. For those hoping for a more impactful and satisfying conclusion to the latest adventures of Jessica Drew, you may be disappointed.