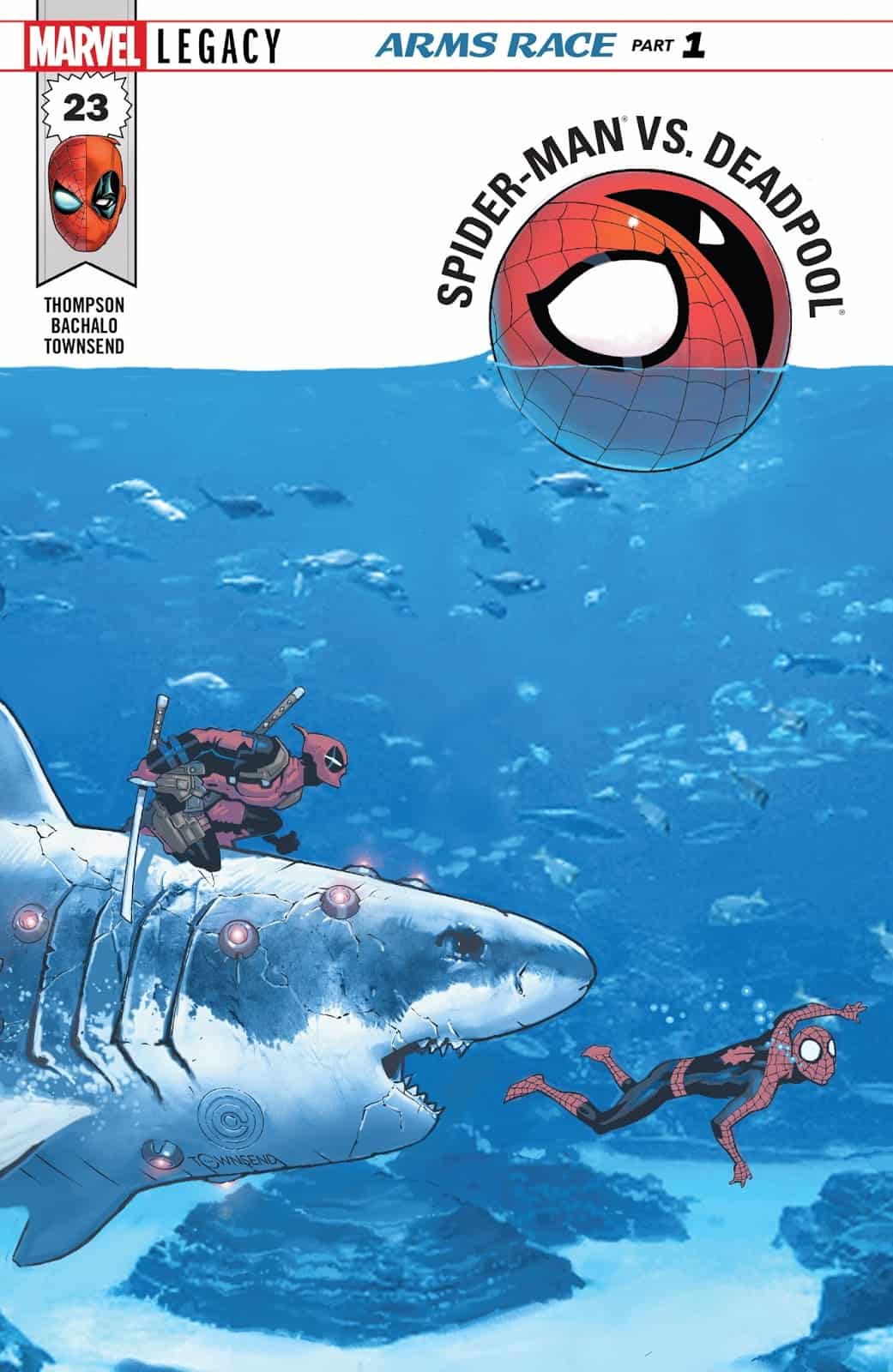 Post Secret Empire, Spider-Man finds out Deadpool has turned back to his old ways and is furious. Deadpool is one of the most wanted men on the planet after killing Agent Coulson and is selling stolen tech from the now non-existent S.H.I.E.L.D.

Last issue saw Deadpool and Spider-Man as participants in Murder World. Run by everyone’s favorite deranged clown, Arcade. Being thrown into the game with people he would usually kill, Wade proved, there is good in him, by helping save the day. He also showed particular skill with a borrowed Web-Shooter, claiming to be “a weapon’s savant”.

Marvel’s biggest bromance hits a wall, Spider-Man cannot condone Wade’s actions during/after Secret Empire and Deadpool, has come to the realization that he is no hero. Spider-Man still believes in Deadpool but doesn’t agree with his recent choices. Parker Industries is in ruins after Peter ordered everything destroyed rather than falling into the wrong hands, leaving Parker broke and homeless.

The opening scene shows a front for a now-defunct S.H.I.E.L.D black site prison being invaded by everyone’s favorite Merc’ With a Mouth, Deadpool. He proceeds to slaughter all the agents and steal the tech for his own gain. A down on his luck Peter Parker is woken up early by a costumed Mockingbird, whose couch he is crashing on. She is going out to follow a lead and tells him not to watch T.V. all day again, send out some resume’s, be proactive. Turning on the tube, he sees an ad featuring Deadpool selling weapons on the black market. This gives Parker the shove he needs to get off his butt and go do something.

An angry Peter calls Morse for help tracking down his old friend and she convinces him he needs to bring him to justice. Once he gets a location, Spidey swings into action to find a Helicarrier now labeled the U.S.S Pool. Spider-Man infiltrates the Helicarrier and attempts to arrest Deadpool for his crimes, including selling stolen weapons. During their fight, Wade denies the T.V. commercials and also offers Spidey a job. Oh and there are telepathic sharks that Deadpool thinks he is training, but they are secretly plotting to eat everyone. The issue ends in a throw down between the two frenemies and a visit to the imposter from the commercials.

This serves as a great jumping on point if you haven’t been reading the series previously. After a two-issue filler story previously, we have a new creative team with Thompson at the writing helm and the legendary Chris Bachalo as the lead artist. This is all credited in a rather creative, 4th wall break method in the opening pages. 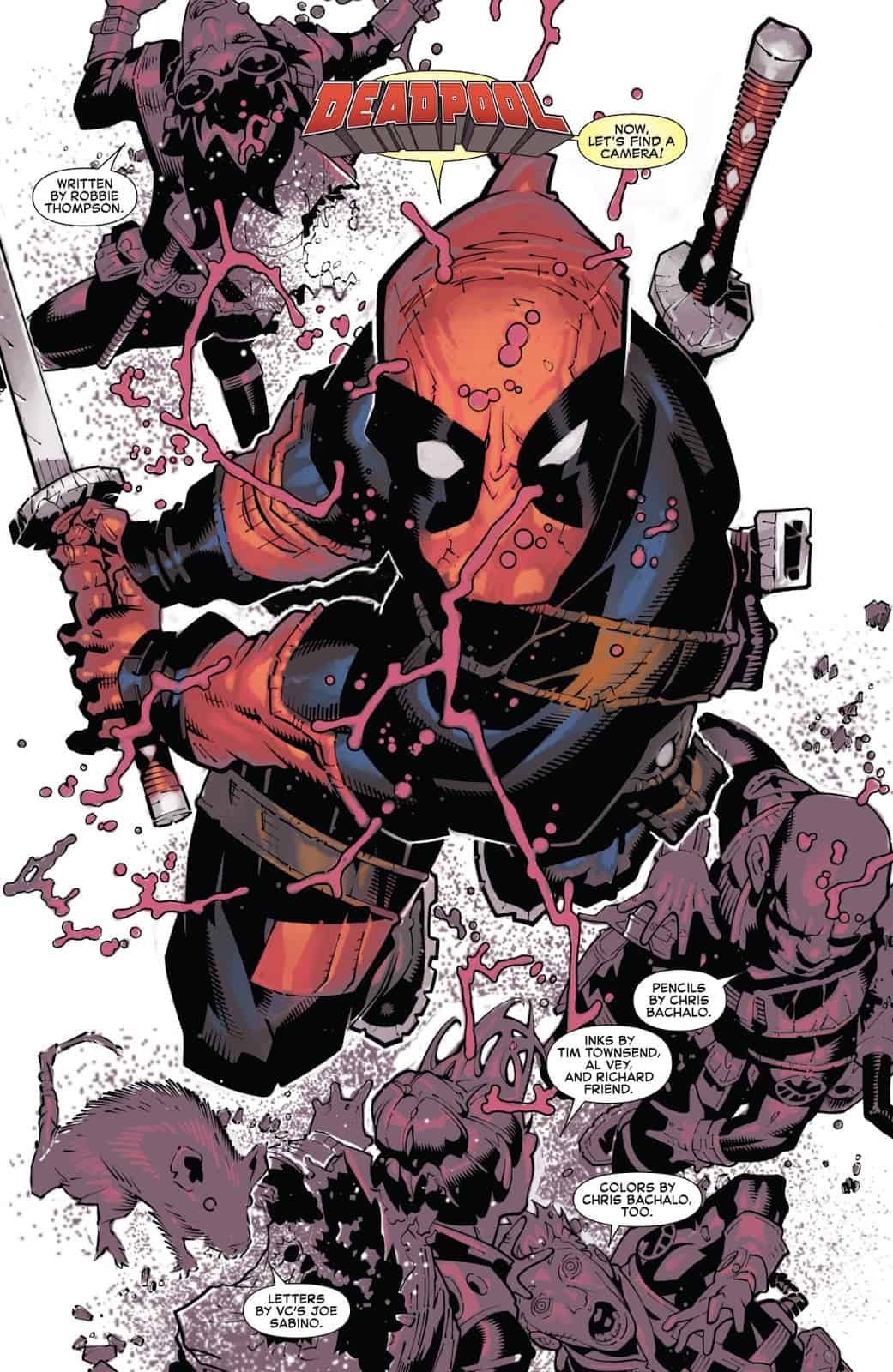 Next, we cut to Bobbi Morse’s apartment, where we are unsure if her and Peter’s ‘moment’ has taken place yet. Either way, Bobbi wakes Peter up early as she is going on patrol to run down a lead and encourages him to be pro-active for the day and not just sit around watching T.V. Here we get three double page spreads with the panels in grid format that help a quick consecutive series of actions take place and move the story in a nice flow. Peter catches an ad with who appears to be Deadpool selling black-market weapons and is enough to make him furious that Deadpool has slipped back to his old ways.

With a can-do attitude, Peter attempts to locate his frenemy but quickly loses momentum and calls Mockingbird for help. This unmotivated Parker we are seeing is a clear sign of the impact that losing Parker Industries has had on the character. We’ve seen him at the mercy of the ‘Parker luck’ before, but not like this, he really needs his mojo back. Bobbi’s information and pep talk are just what he needs to spring into action in the red and blue tights. With new gusto, Spider-man is set on bringing in Deadpool for his crimes during Secret Empire.

As Spider-Man finds the newly crowned U.S.S. Pool Helicarrier, his frustration peaks. Infiltrating the base, he encounters weirdness that is trademark Deadpool. After a scuffle with the security, Screwball, who is baffled how he got past the defenses, stating only ‘friendlies’ can get in. Wade is overjoyed, announcing that his “Very best, closest friend” has come to visit. But Spidey leaps onto him, proclaiming he is “Under arrest”, of course, Deadpool downplays the seriousness of the situation, wanting to give Spider-Man the M.T.V. Cribs Tour.

As they tussle, Deadpool’s staff look on and decide to stay out of it, Wade offers Spidey a job, stating that Parker Industries has gone belly up and that Parker is a loser. Editors note Pool doesn’t know Peter’s secret identity. Spider-Man angrily retorts that he has gone too far, selling weapons on late night commercials. A stunned Deadpool claims he is not in any commercials and proceeds to write an email to Screwball to investigate and find the perpetrator. Wade’s dismissal of his presence riles Spider-Man into smashing the keyboard and triggers a trap door that the two fall into.

Enter the pool in Deadpool, a giant tank containing Bruce and Deborah, the telepathic sharks. After one takes a bite out of Wade’s leg, they explain to Spider-Man where they ‘freed’ them. Clarifying how they are in his head, Deadpool’s staffer Manphibian starts to explain that once trained, they will go to the highest bidder, as Wade cuts him off, claiming “What a kidder this one is”. As they swim off to see ‘the real toys’ we get an idea of the shark’s self-aware true intentions, including downloading Stranger Things 2 and then eating them all! They have great taste!

This is about where the comedy that we expect from the duo stops and things get serious. We see a rare glimpse of Wade dealing with his true feelings and trading punch for punch with Spidey. Deadpool surmises that he will never be anything more than a merc’ for hire and a killer. He tried, he really did, but he can’t escape who he is. 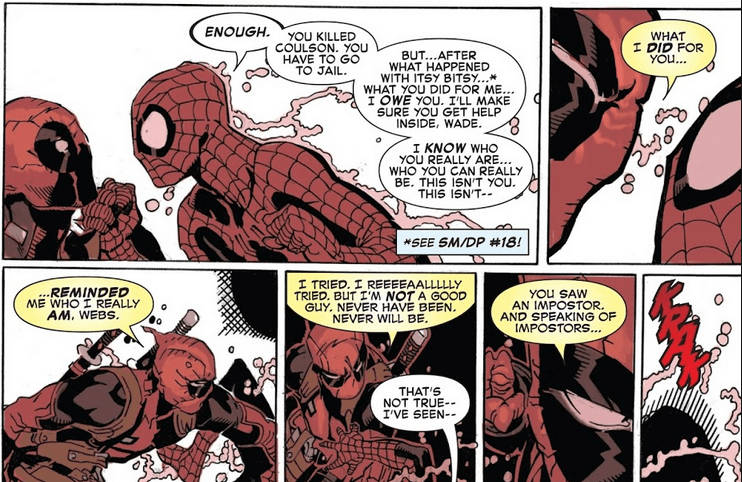 The next and final page sees Deadpool getting a location on the Faux-Pool and literally dropping the duo out of the Helicarrier to go and deal with the imposter.

I really enjoyed Bachalo’s slightly abstract style and think he is a perfect fit for the series. It’s not as distorted as his work on Wolverine and the X-Men from a few years back, just the right amount of quirkiness. His colors are helping to communicate the emotion and focus of the narrative too. For example, the above panel is using red hues to really get the anger across to the reader. The lack of background also allows for complete focus on the emotional exchange. The slow introduction of a black background seems symbolic of Wade’s emotional state, sinking back into his dark ways. To be honest, the whole issue builds to this set of panels like an emotional crescendo. With all that these two have been through, it seems it was time for a throw down.

Joe Sabino controlled the lettering quite well, the characteristic yellow for Wade, a squarer, more digital font for the LMD and regular lettering for the rest of the cast. He makes good use of bold to emphasize words and leaves a bit of white space around comments that are slightly dramatic. I would have liked to see more sound effects (cause I’m a type nerd) but I feel his use of them sparingly gave them more poignancy.

Final Thought: Not the bromance you would expect from this series, but still had the quirkiness that comes with Deadpool. I am interested to see how the new creative team handles this new dynamic between the duo. That powerful and emotive sequence towards the end really defined this issue for me.