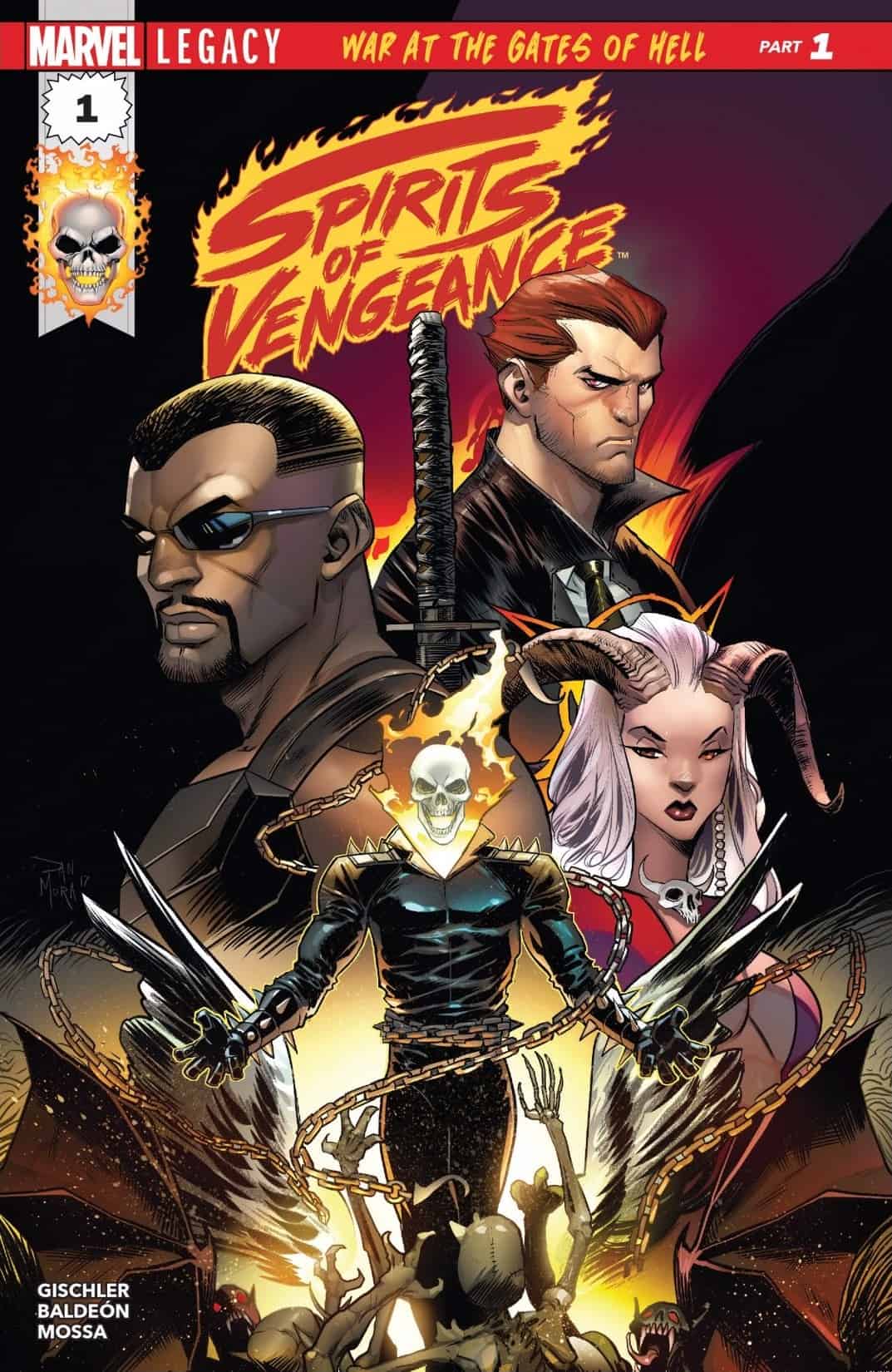 Good and Evil. A perpetual balance. One keeps the other in check. Until now. The stability has become volatile and those of the spiritual ilk are bracing for a war. The Spirits of Vengeance have assembled to attempt to avert the destruction of heaven, hell, and mankind.

Johnny Blaze, the Ghost Rider, made a deal with Mephisto and merged with a demon to save his own life. Blade, the Daywalker, born of both human and vampire lineage. Daimon Hellstrom, Son of Satan and would be successor to rule hell. Satana, Daughter of Satan who unlike her brother, fully embraced her demonic birthright. Together they are known as the Spirits of Vengeance.

After an unknown man delivers a mysterious silver bullet and pays the ultimate price and erupts in hellfire, Johnny Blaze seeks the aid of an old friend. Daimon Hellstrom surmises that there is more afoot and the two set out to meet with a variety of otherworldly contacts, each connected to the supernatural realm and greater knowledge. Each inquiry leaves only more questions, and counter forces begin to mobilize with dual intent on recovering the bullet and preventing any further exposure. After visiting old circles yield similar results, acquaintances continue to suggest that although supernatural occurrences happen at a peak rate every thousand years, there is a difference so significant that the damned have begun to flee in fear, leaving Daimon to conclude that existence itself is in jeopardy and decides to reach out to Blade for help. 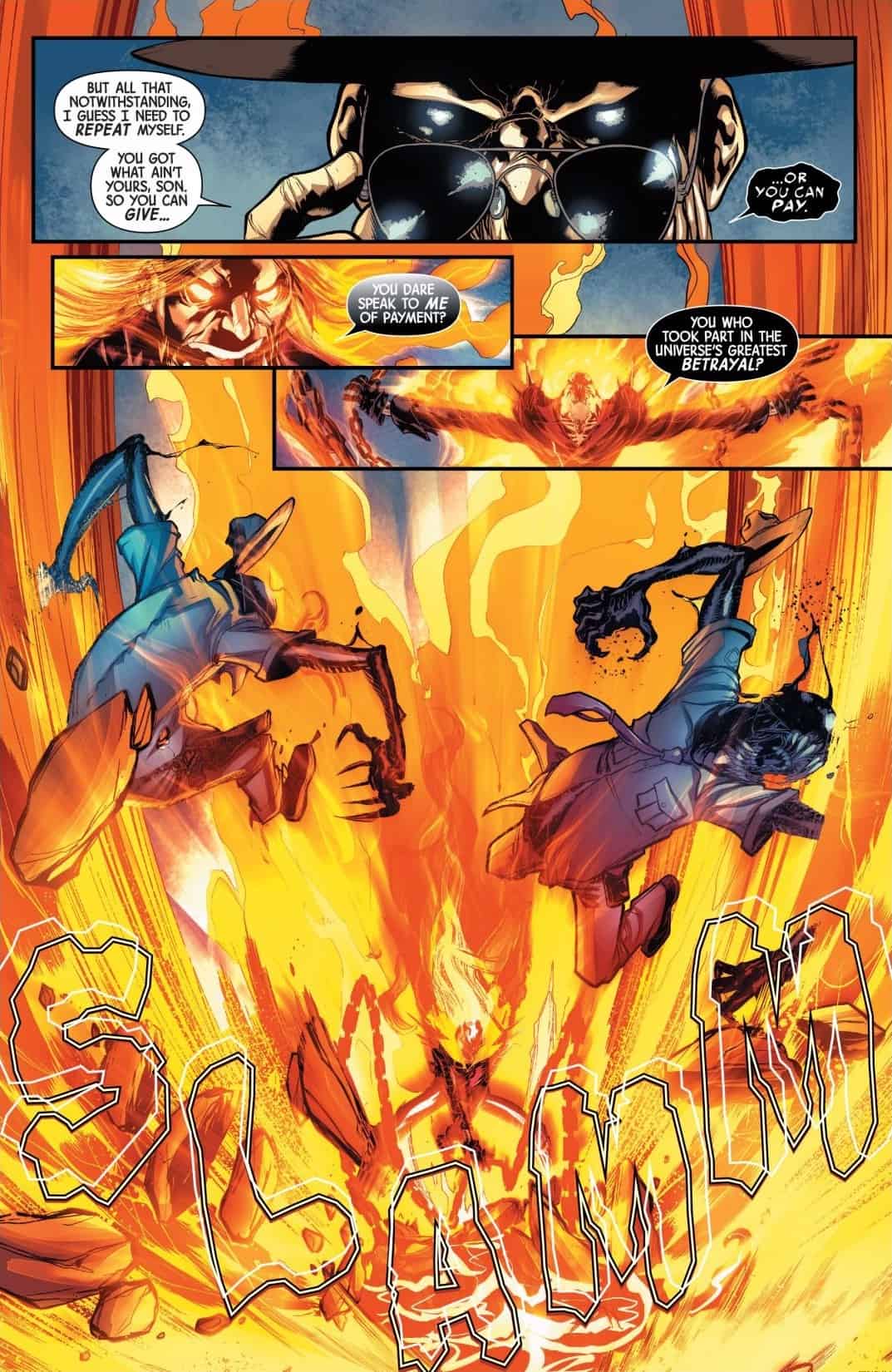 As a comic reading teenager during the 90’s, Ghost Rider and any similar or directly related troupes never appealed to me. Not that the comic book was bad, but simply that it’s attributes were a bit too ultra-macho with the flaming bikes, leather studded jacket, and wheelies that saturated almost every book with cross appearances. Nicholas Cage’s renditions only made the character less engaging with the overly morose, ill delivered puns, and jacked dialog. The only one to suffer a worse fate in my eyes was Blade. I never realized until years later that Blade was related Marvel comics at all. Maybe that was for the best as Wesley Snipes barely palatable performances still makes me wince when recalling those films. Beyond that until now, I have had absolutely no exposure to Daimon Hellstrom or his sister Satana likely because the vein of comics in which they were featured were relegated to a handful of comic books that I never had any interest.

However as often happens with maturity, tastes begin to change, and you have a whole new appreciation for things that you would never tolerate as a hard-nosed, know it all youth. Over the past few years I have really enjoyed both fictional and non-fictional subject matter involving theology and the variety of stories that interpret the interaction of spirituality and humanity.  More and more I have begun to find myself more attracted to the stories featuring the divine and the damned. When I learned that the Spirits of Vengeance was being released with the renewed efforts of Marvel Legacy, I was pleased and found myself genuinely excited because my lack of exposure would not permit me to compare it to what little knowledge of these characters I never actually had. Generally, I always gravitate toward “team” books in lieu of solo titles and was even more excited that this wouldn’t’ just be a Ghost Rider book, but a tale that would equally incorporate three other unfamiliar yet interesting characters to me.

When I opened the first page, I knew that I was in for a real treat. In a period where I have been looking for something new that would give me the sense of thrill coupled with enthusiastic eagerness while waiting for the next issue, Spirits of Vengeance first issue has filled that void.

From the apocalyptic premise, to the well scripted dialog and timing by writer Victor Gischler, this comic book starts off with pure adrenaline and a central question which drives the overall plot. After the angel sacrifices himself to bring Johnny the silver bullet, the stories particular item of central importance, the Rider enters into a melee with two pursuers, and with stunning visuals from David Baldeon, he dispatches them with relative ease. The story propels forward with the bullet being the purpose for the introduction of Daimon and the assortment of visitations to a diverse cast of minor demons in the pursuit of information. I took special enjoyment in the fact that instead of depicting these encounters in the plain and conventional vein of hellish dower, predictable within this kind of genre, Gischler opts for a more lighthearted approach by rendering their nature in a more humorous quality. As the story progresses, subsequent interactions reveal Gischler’s intent in which to show that demons, at least the minor type that masquerade and continue to live among humans, maintain and share many of the same qualities as their mortal neighbors. In many cases their only telltale quality being found in their excess, such as gluttony or vanity, being their only distinguishable trait. Outside of that singular example, they remain hidden, living unremarkable lives, and instead of bids for world domination, their vital concerns can be as simple as obtaining a box of assorted donuts. 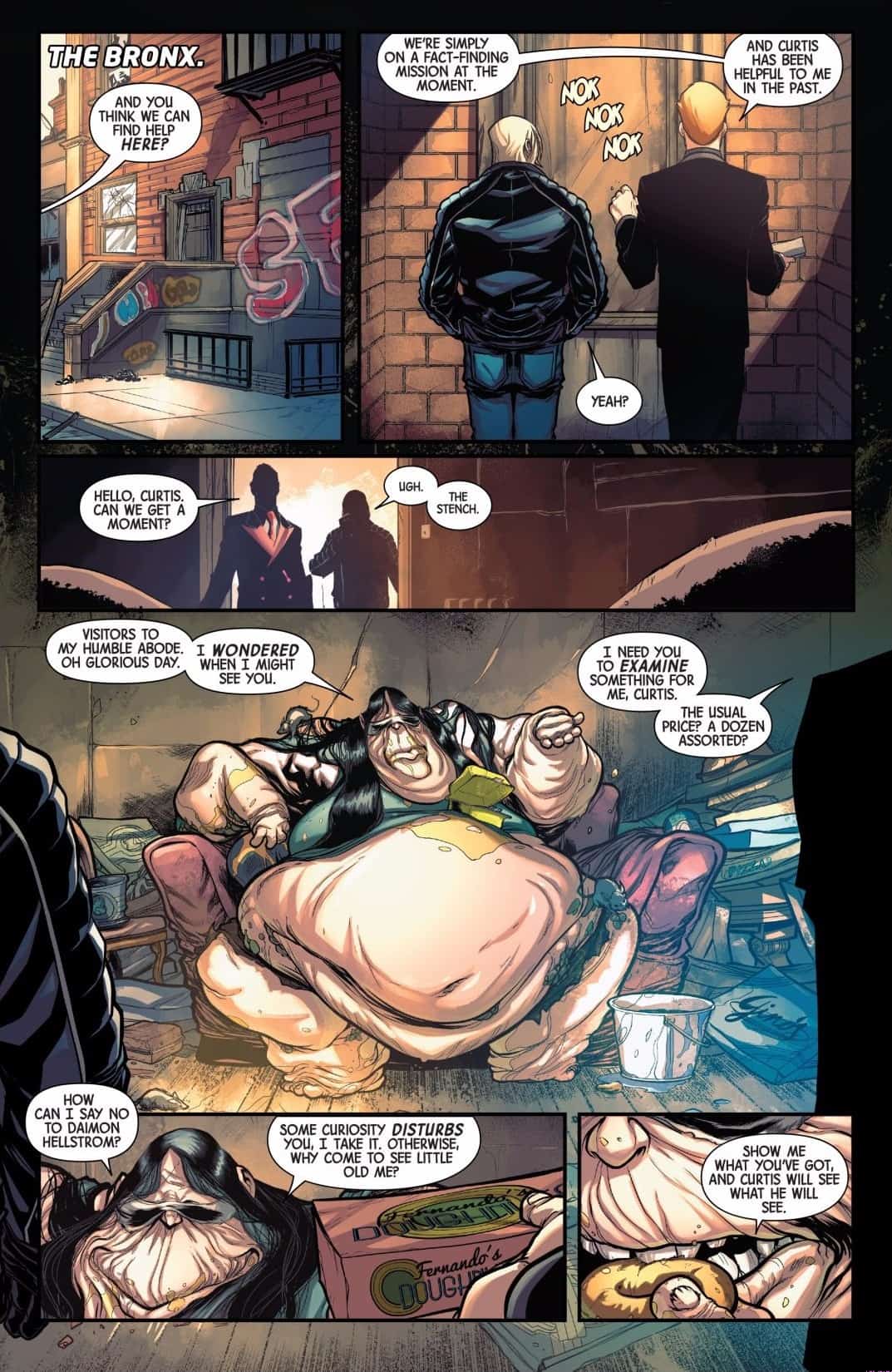 Final Thought: The creative team behind Spirits of Vengeance is a fantastic combination literary and visual talent. If the first issue is any indicator of the future, this is one of Marvel’s hottest new titles!