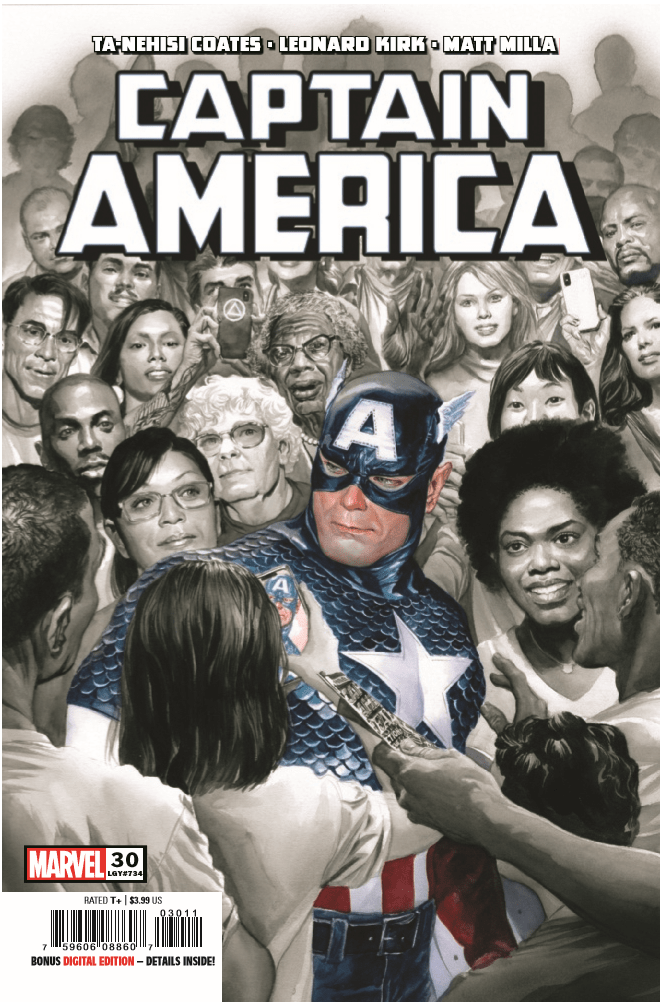 "ALL DIE YOUNG" ends here! Ta-Nehisi Coates concludes his run on CAPTAIN AMERICA with an all-out fight to the finish with the Red Skull and the Power Elite! 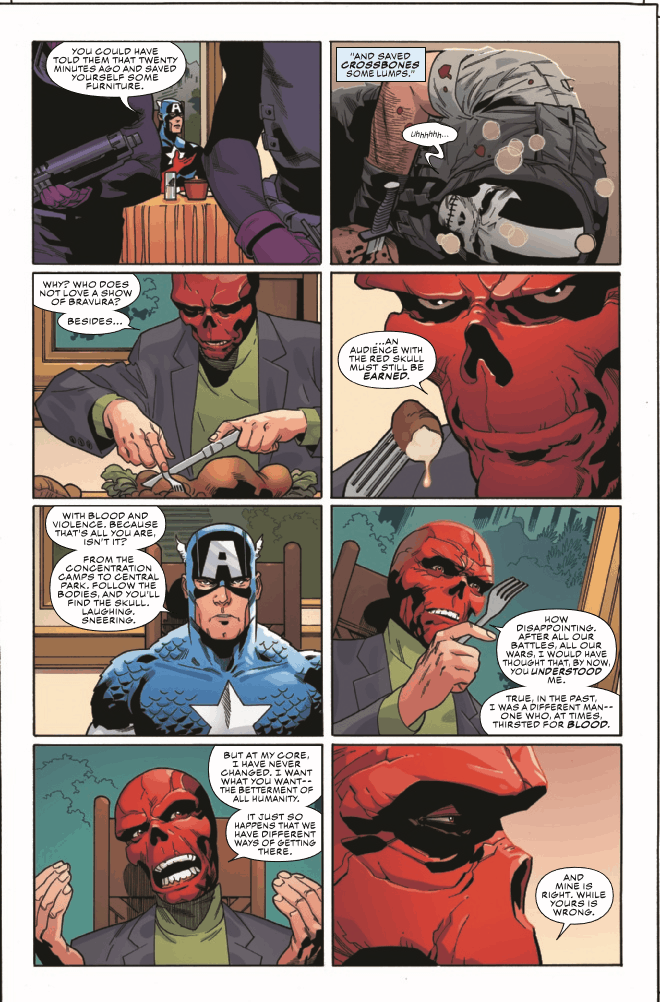 It is July 4th, 2018. Donald J. Trump sits in The White House as party lines strain, threatening to tear this nation apart. The divide between extreme elements of liberal and conservative parties is a gulf that seems poised to swallow us all. The first issue of Ta-Nehisi Coates’ run on Captain America has just hit the stands.

It is July 4th, 2021. The entire planet is still reeling from the global COVID-19 pandemic. The vaccines continue to roll out but the social divisions and wide spread conspiracy theories sewn amongst the citizens of the United States prevent common sense to rule the day. The final issues of Ta-Nehisi Coates’ run on Captain America is three days away from hitting the stands.

In many ways, the difference these three years between start and finish make is dwarfed by just how much has remained the same. As Coates embarked on this journey with the Star-Spangled Avenger, the question of what it means to be American in the 21st century was an intriguing concept– a project in self-reflection but mostly a theoretical project really. Then came 2020 and the pandemic, the economic crisis, the George Floyd murder, the Breonna Taylor murder, the Presidential election and ultimately, bleeding into this year, the insurrection at the Capitol Building. Coates started with Nuke-bots but we ended with real life domestic terrorists, almost as if prophesized.

Looking directly at Captain America #30, then the question of where we end this three-year long story is the most thought-provoking one. What further doom and gloom awaits? Instead, Coates shows his mastery of understanding the very nature of the superhero narrative and leaves not in despair but in the utmost domain of hope. In the end, Cap and his allies win. The Power Elite is defeated, the Red Skull embarrassed in front of his followers and those followers accept that the Skull’s interests never had his followers at heart. I know I promised no spoilers but I’m flexing here that Cap’s victory isn’t really a spoiler at all. He won because we need him to win, not as a “superhero” or a “protagonist” but as an ideologue. If superhero narratives reflect the world in which they are created as a mythological construct, then we deeply need for that construct to show us that there is a lesson to be learned and a way forward, even when that might not be the truth. Coates’ run on Cap has pulled at strings, shed light on systemic problems in our nation, but ultimately assures the reader that the sun will rise again, good will triumph over evil, and these colors don’t run, placing Cap firmly where he belongs alongside Superman as a symbol of hope and perseverance, even against a world that is actively trying to reject him.

Comics writer Howard Mackie once told me that a main goal in closing a series with a long-running property was to return the character to neutral for the next writer. In many ways, Coates’ has accomplished this by spending three years problematizing the character and its iconography only to eventually return Steve Rogers to a position in which he can simply proceed as Cap regardless of the bumps in the road. For the cast surrounding Steve, though, Coates has put immense work into ensuring that they remain forever marked by their character progress in this run. Peggy and Sharon Carter in particular are tremendously improved in these thirty issues, as well as the villain [redacted for spoilers], who promises to be a new and interesting threat moving forward. All in all, this run has been a success in many regards but none more so that in placing strong female characters at the forefront of the fight for an American identity.

As we look to the future, it seems clear that Christopher Cantwell and company are prepared to take up the baton and continue this evolution of the 21st century Captain American in the recently launched mini United States of Captain America, which promises to show us Captains America from various walks of life, defending often overlooked groups of people. The stronger the diversity of the American culture shines, the more interesting the analysis of what it means to be an American becomes. That seems to be the goal here all along and if so, mission accomplished.

Captain America #30 sees the end of Ta-Nahisi Coates' run on the book as Cap and his allies face down the Red Skull and the Power Elite's plot to discredit the Sentinel of Liberty. But will the American public accept the truth? Find out for yourself in this issue from #Marvel .