SPOILER-FREE REVIEW: United States of Captain America #1: This is America 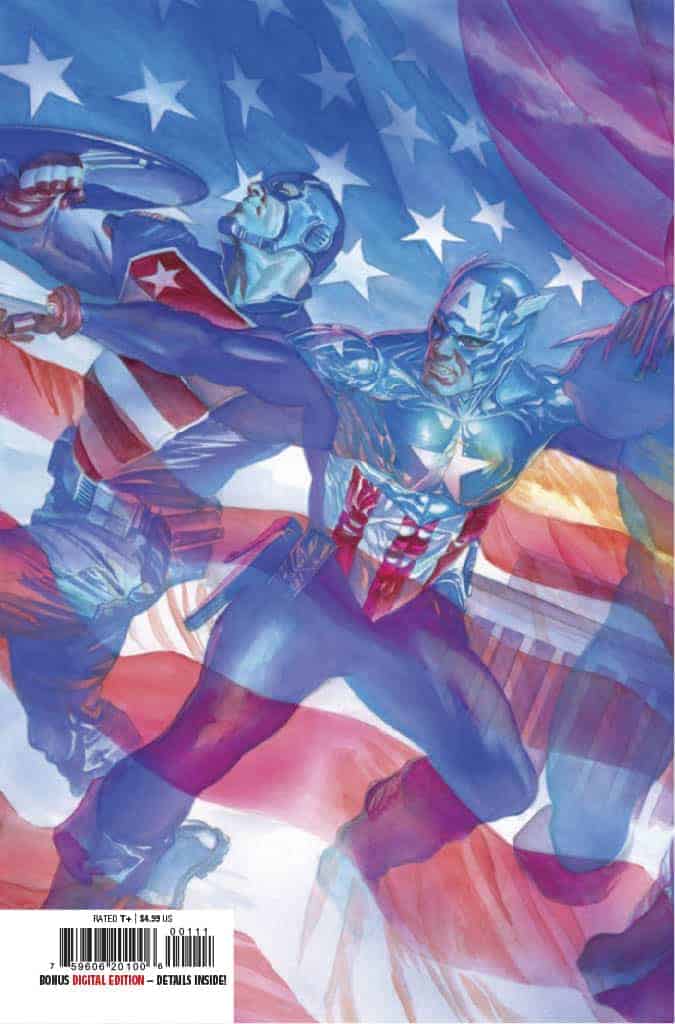 The shield has been stolen! No one understands the value of the shield like those who’ve wielded it, so Steve Rogers and Sam Wilson set out on a road trip across America to chase down the thief.
But instead, they find the Captains, everyday people from all walks of life who’ve taken up the mantle of Captain America to defend their communities. And for some reason, the shield thief wants them all dead. Can Sam and Steve get to them first?

Christopher Cantwell and Dale Eaglesham lead a can’t-miss miniseries to celebrate Captain America’s 80th Anniversary, joined by a rotating series of creative teams to tell the stories of each new Captain-starting with Aaron Fischer, the Captain America of the railways, brought to life by Josh Trujillo and Jan Bazaldua! 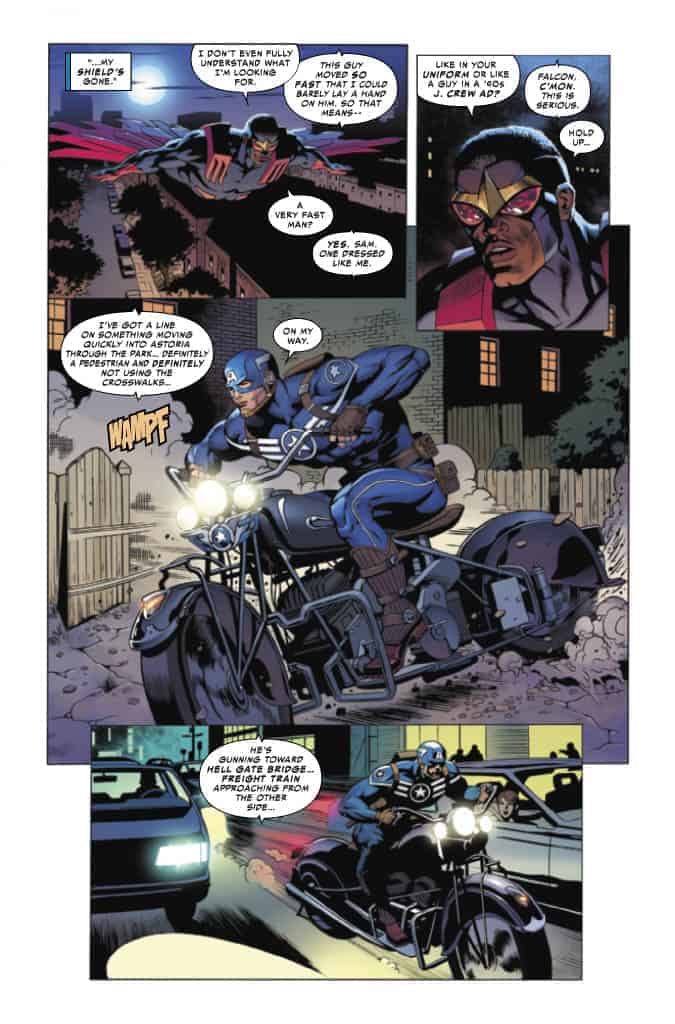 As we have seen in the current Ta-Nehisi Coates run on Captain America, the very notion of the American Dream and its connection to the iconography of Captain America have come deeply into question. America— the land of the free and the home of the brave— is so much more than the over-simplified constructions Captain America has been long associated with America IS the home of the free and the land of the brave. America is also the home of strange fruit and  baseball. It is home to jazz and praying the gay away. It is home to trails of tears and corn on the cob. It home of the comics superhero and bayonet constitutions. This is America and it is COMPLICATED.

United States of Captain America continues in the same vein of Coates’ work as it continues to explore what it means in the opening story, “You Brought Two Too Many,” we see a tale in which Steve Rogers is confronted by a number of Captains America, some known like Sam Wilson, some new like Aaron Fischer, some as yet unknown. At the heart of this narrative is a classically drawn Cap story with the ever-great Dale Eaglesham on art and rising comics star and television writer Christopher Cantwell on text. In many ways, this opening story serves as symbolic primer for what is to come as these varied iterations of Cap seemed primed to transition the character into an interpretation that can work in the current socio-political climate. This story operates in broad strokes, and while the Sam Wilson dialogue can be cringy in moments, the structure for a major redefining event is well laid. 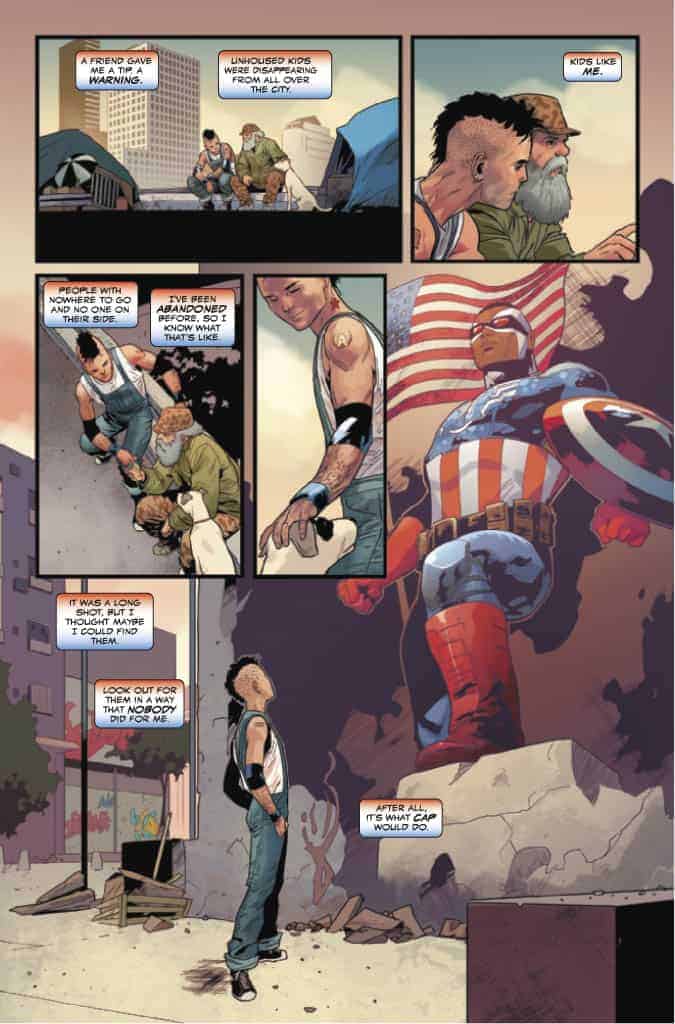 The second feature, “Tracks,” shifts focus to new character Aaron Fischer— a queer, homeless Captain America who rides the rails wielding a trash can lid like a fascist-killing machine and helping the community of disenfranchised, destitute, or simply those who don’t quite fit neatly into society as it exists right now. The art in “Tracks,” provided by Jan Bazaldua, stands in sharp contrast to Eaglesham. If Eaglesham represents the Cap we have known, then Bazaldua clearly strikes a more contemporary modality, with a more minimalist style, a sleeker design, and far more economical. The story, written by Josh Trujillo, functions as a deeper dive into Fischer’s history and purpose, striking a beautiful balance between respect for the legacy of Captain America and a bold desire to expand and update. Perhaps this is the new American Dream? To reinvent, to embrace our flaws and seek to improve upon them. United States of Captain America #1 hits home in nearly every aspect. To be Captain America in the 21st century. As we move towards being a more socially progressive nation— despite how slow that progress is and the number of setbacks— there can no longer be a monolithic notion of Captain America, and certainly the idea of a cishet white male from the 1940s could be a post but necessarily fails to represent the whole.

SPOILER-FREE: United States of Captain America #1 continues the critical work of reimagining the meaning of Captain America in the contemporary world by introducing the concept of a legion of Caps, first with Aaron Fischer, the queer young Cap of the railways!

SPOILER-FREE REVIEW: United States of Captain America #1: This is America