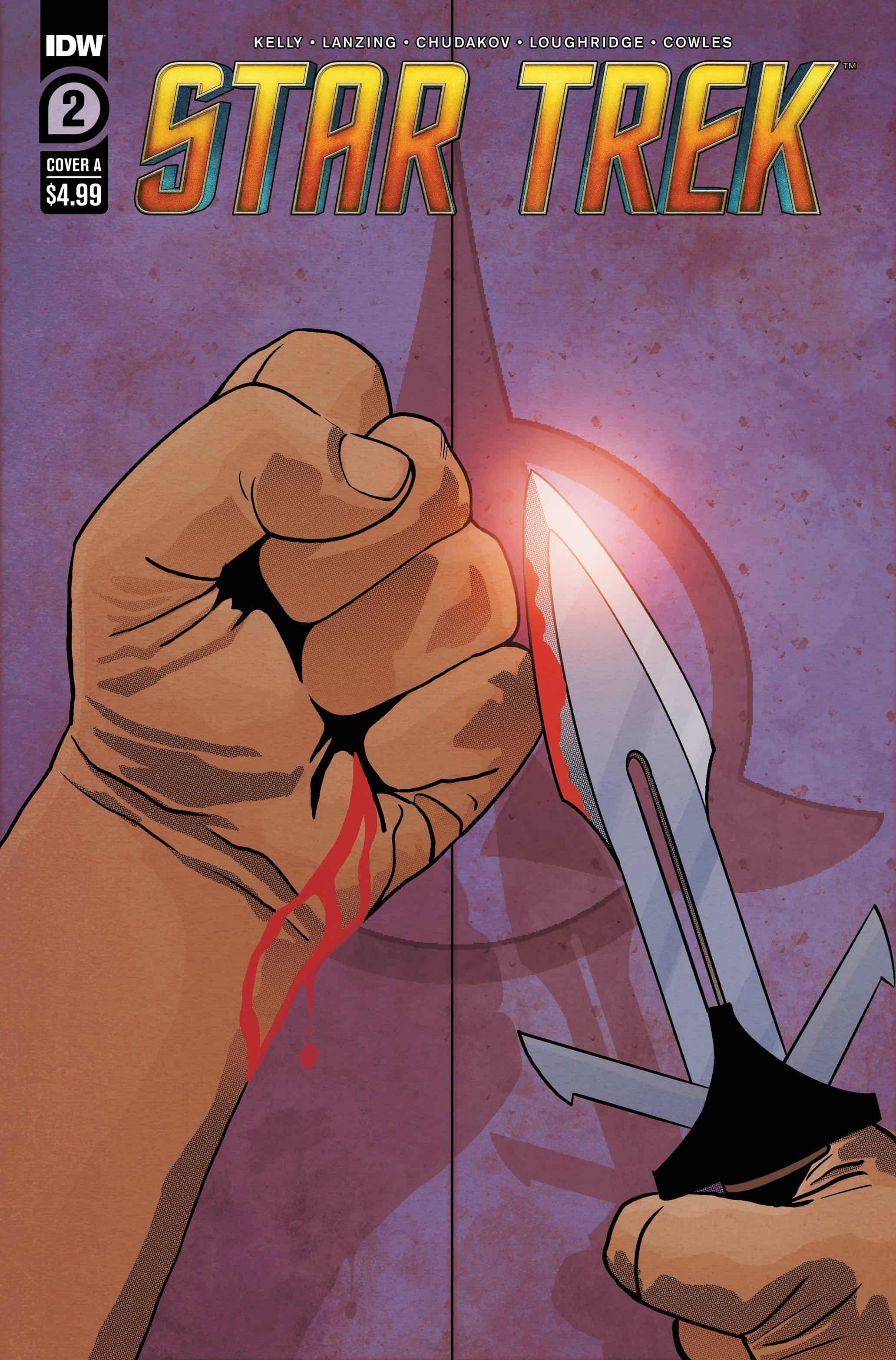 Tasked with a mission from the Prophets, Benjamin Sisko enlists the help of an old friend from Qo'noS to track the ship and persons responsible for slaying the gods. From Star Trek: Year Five duo Jackson Lanzing and Collin Kelly (Batman Beyond, Captain America) and illustrated by Ramon Rosanas (Star Wars), continue the adventure in IDW's brand-new, flagship Star Trek ongoing series that features fan-favorite characters from every era of Trek!

Gods are in danger and only mortals can save them. When Ben Sisko was sent back by the Prophets in Star Trek #1, that was the mission he was meant to complete. As proof of the danger, the issue ended with the crew of the USS Theseus learning that the Crystalline Entities, powerful cosmozoan lifeforms, had been exterminated.

Star Trek #2 jumps ahead to the Klingon homeworld and an encounter with a man Sisko considers his brother: Ambassador Worf. With Worf at his side, Sisko goes before Emperor Kahless to request an audience with a legendary race of engineers known to be able to create anything: the Sarkadesh. The Sarkadesh reside in the borders of Klingon space and in return for not using their engineering abilities to destroy the empire, the Klingons guarantee their safety from outsiders. Kahless refuses.

Anyone familiar with Deep Space Nine will know that as the series went on, Sisko became less and less likely to be stopped by something as simple as diplomatic niceties. In Star Trek #2 Kelly and Lanzing capture this aspect of the character perfectly–not just Sisko’s actions but also his attitude. They also capture the distrust that had become a part of the character late in the television series. Early in the issue Sisko reflects on his new crew. To his way of thinking, the crew of Deep Space Nine was a family. But on this ship he is, in a way, alone. The Theseus crew, on the other hand, are an unknown quantity. They believe the threat is real but don’t necessarily believe in their commanding officer. And Sisko in turn views them as skeptics and a means to an end at best. At worst, he sees them as a “panopticon”–a prison from which he is being observed on all sides.

Kelly and Lanzing introduced this Sisko subplot from almost the first page of the first issue, and it’s refreshing to see it continue in Star Trek #2. Most of 90s Trek was known for its almost total lack of conflict between the main characters–something that hobbled dramatic storytelling since conflict is at the heart of drama. Deep Space Nine was the exception, and Kelly and Lanzing channel that part of the series while keeping the scale of the series more consistent with the grander, more high concept ambitions of The Next Generation and Voyager.

Ultimately Kelly and Lanzing resolve this conflict–at least in part–when Data, Sisko’s first officer on the Theseus, succeeds in a diplomatic situation Sisko himself is failing at. This moment feels a little too easy. While I believe that Sisko would set his skepticism for the commander aside, I don’t believe that he would jump so quickly to “let’s be friends”.

Star Trek #2 has no shortage of conflict, and Chudakov’s art captures the tension wonderfully. The issue is filled with panels focused closely on characters’ faces. It’s all well and good for Kelly and Lanzing to write conflict into the issue, but anyone who has seen Deep Space Nine will remember how expressive Avery Brooks was as Ben Sisko. While thankfully eschewing any kind of photorealism in his art style (something I praised in my review of the first issue), Chudakov captures the energy everyone familiar with Ben Sisko will expect. And Sisko is not alone in this treatment. Worf is likewise a fun character to look at throughout the issue, and Emperor Kahless is downright sinister.

Less successful from a visual standpoint is Loughridge’s colors. This is a very red issue. The exterior of the Klingon homeworld is awash in hot reds and oranges. Kahless’s throne room is highlighted with red accouterments, fire, and a general red/orange background when Chudakov focuses in on characters’ faces. The Sarkadesh homeworld is also various shades of red. This color choice does create a more inviting feel when the crew is on the ship. But as Star Trek #2 goes on, it becomes tiresome to look at.

Star Trek #2 is a nice blend of storytelling styles taken from the three series it is principally borrowing from. In that way it feels fresh and not a retread of ideas we’ve seen before. And its focus on Ben Sisko, which ultimately drives many of the themes at work here, will be especially appreciated by Deep Space Nine fans.