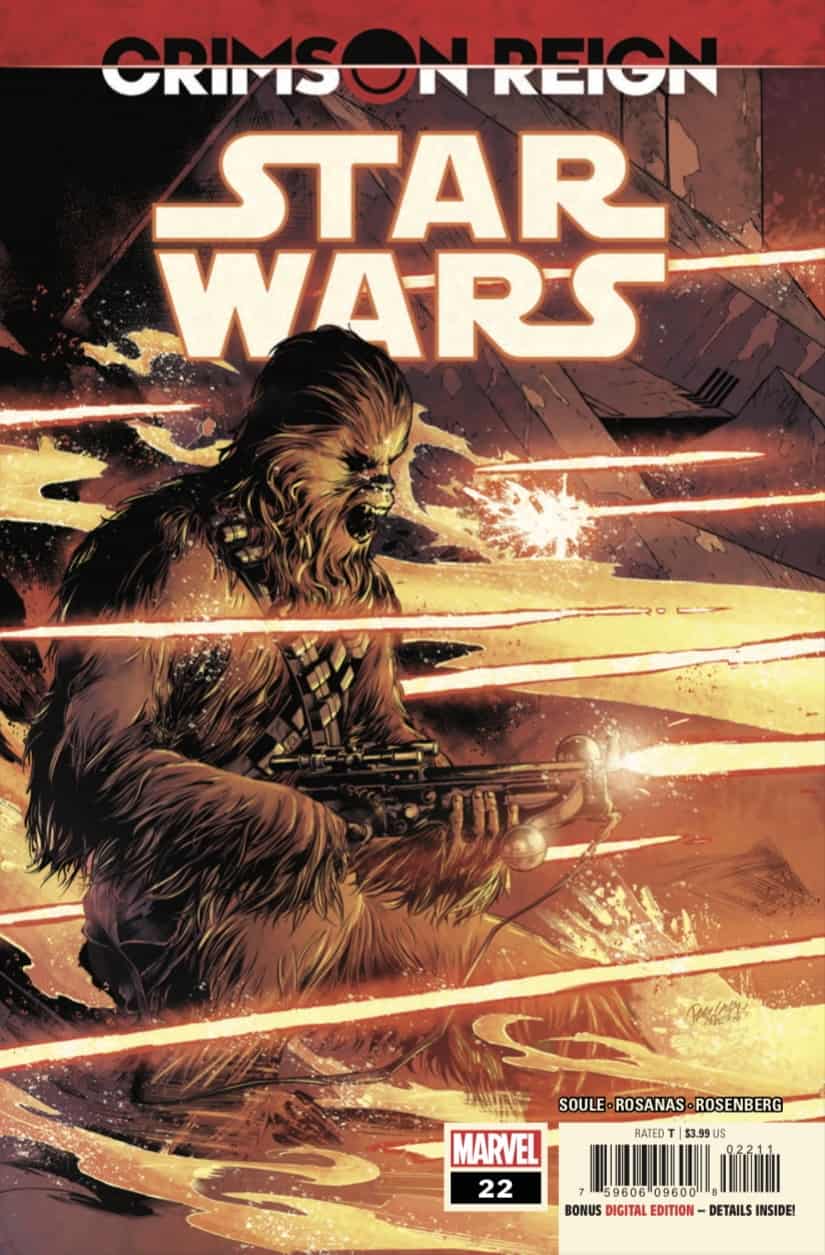 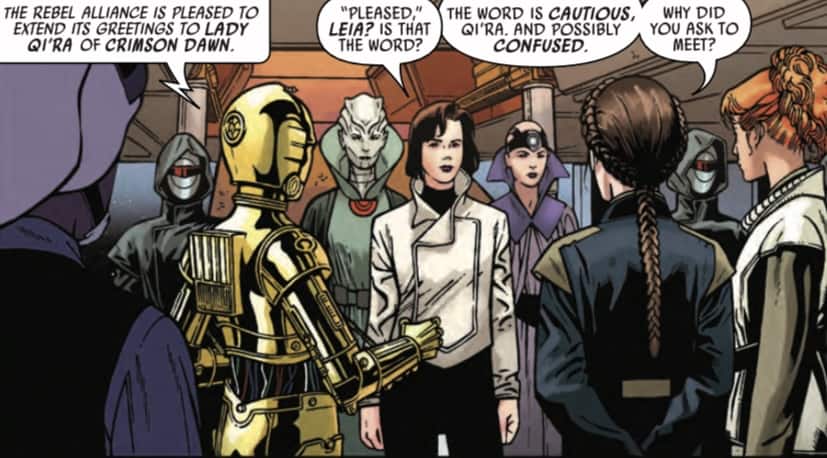 After spending months aboard and Imperial Star Destroyer, things started to look even worse for Shara Bey when she gets captured. At the same time Leia Organa has spent even longer trying to reunite the rest of the Rebel Alliance, while also trying to shake off Commander Zahra who has been hunting them down relentlessly.

The winding down of this series has begun. It is coming closer to its probable end in just a few months. What that means for its overall story is that many things need to be resolved before this story arc ends. The most pressing issue is finding the scattered Rebellion which has been an issue since this series began, as was Commander Zahra. Because this series is basically the flagship of the Marvel “Star Wars“ various series, it had to cover more ground. There needed to be stories about Luke finding info on the Jedi and Lando playing both sides between Jabba and the rebels. Zahra and her crew were sometimes completely out of the series entirely for many issues at a time. Shara Bey also seemed to get forgotten for the promise of new stories. This issue continues upon the groundwork of the last one to fill in the gaps and eventually help finish that tale. On top of a daring rescue mission to rescue Shara, the chapter manages to ground the story within the “Crimson Reign” event by adding Qi’ra into the mix as she offers to help Leia out of a scrape to help further the war she profits from. And even beyond that, readers are treated to a few pages of Chewbacca in action as he trains for the coming mission to Tatooine. This issue certainly managed to pack a lot into a regular sized book. 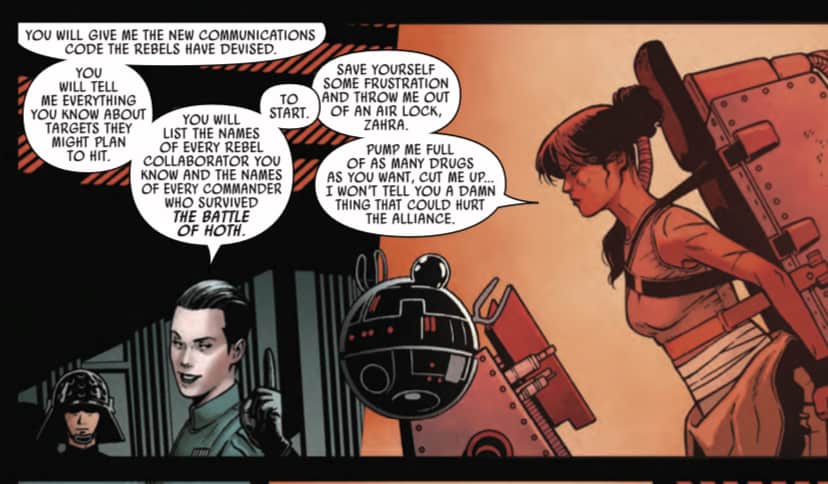 A key function of “Star Wars” comics is to help connect and strengthen the films. This particular series takes on most of that responsibility. This issue does a very good job being a perfect example of that. On the surface it is part of a series meant to bridge the gap between The Empire Strikes Back and Return of the Jedi by taking place between them. However beneath that there tends to be a lot of other smaller connections. Qi’ra ties the issue to Solo and even goes further by allowing her to reunite with Chewbacca in a way. The issue ties to the sequel trilogy as well by including Amilyn Holdo from The Last Jedi, but much younger version of her. This helps establish her long time friendship with Leia, whom she met as a teenager in the novel and manga “Leia: Princess of Alderaan.” Holdo is even there to witness Poe Dameron’s father ignore orders to mount a risky rescue attempt of his wife. Undoubably this is meant to tie into Holdo trying to keep Poe from doing the same thing in The Last Jedi. However, the thing this series has ultimately driving for is to lead up the Han’s Rescue from Return of the Jedi. A quick montage of Chewie training to raid Jabba’s Palace finally grounds the reader into the time period, and reminds the audience of what’s to come. 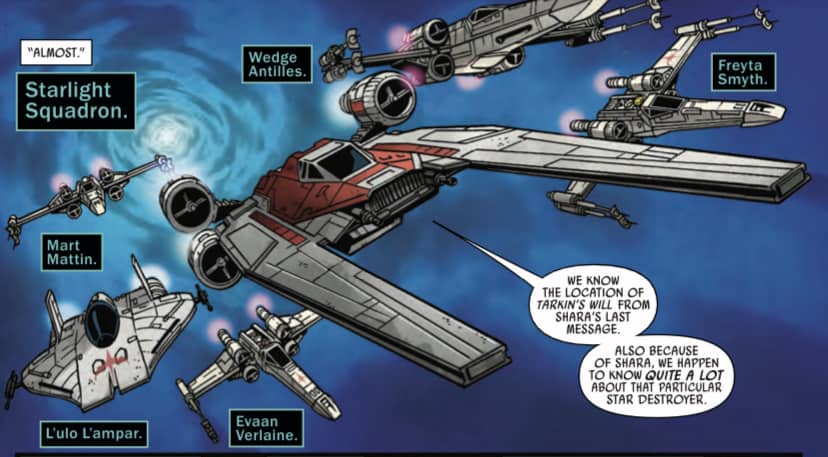 This was a very well balanced issue as far as the series, arc, and individual story is concerned. Despite a lot going on, most of the settings are just control rooms and ship interiors. The limited action that is present is a bit disjointed. It is neat to see Chewie training and fighting, but it is hard to really follow what he’s doing specifically. That goes for a lot of events in this chapter. It is hard to tell where everyone is. The art is in no way subpar, but as has been an issue with this whole series, the faces of the humanoid characters are not recognizable to the actors that played them. The overall color theme is grey and blue, which is not surprising because of the ship interior settings. There are splashed of brighter colors during an interrogation and Chewbacca’s training, but most of the issue is bland in color. Dialogue really wins this show, and it needs to. It’s quite possible color and art took an intentional backseat to drive the tale and that’s really the most important thing for an issue to do, especially near the end of a series. 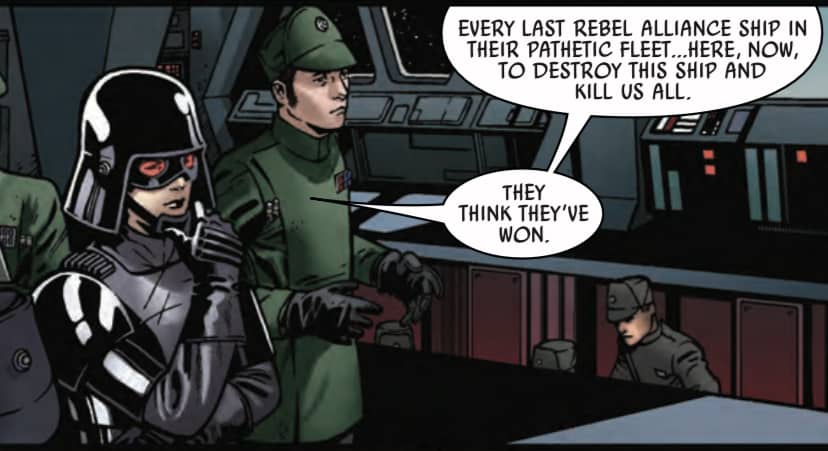 Thanks to Crimson Dawn the rebels have an upper hand. Thanks to the intelligence of Commander Zahra the Empire is ready for them. There is a very good chance this will all come down to the small band of rebels now aboard Zahra’s starship.