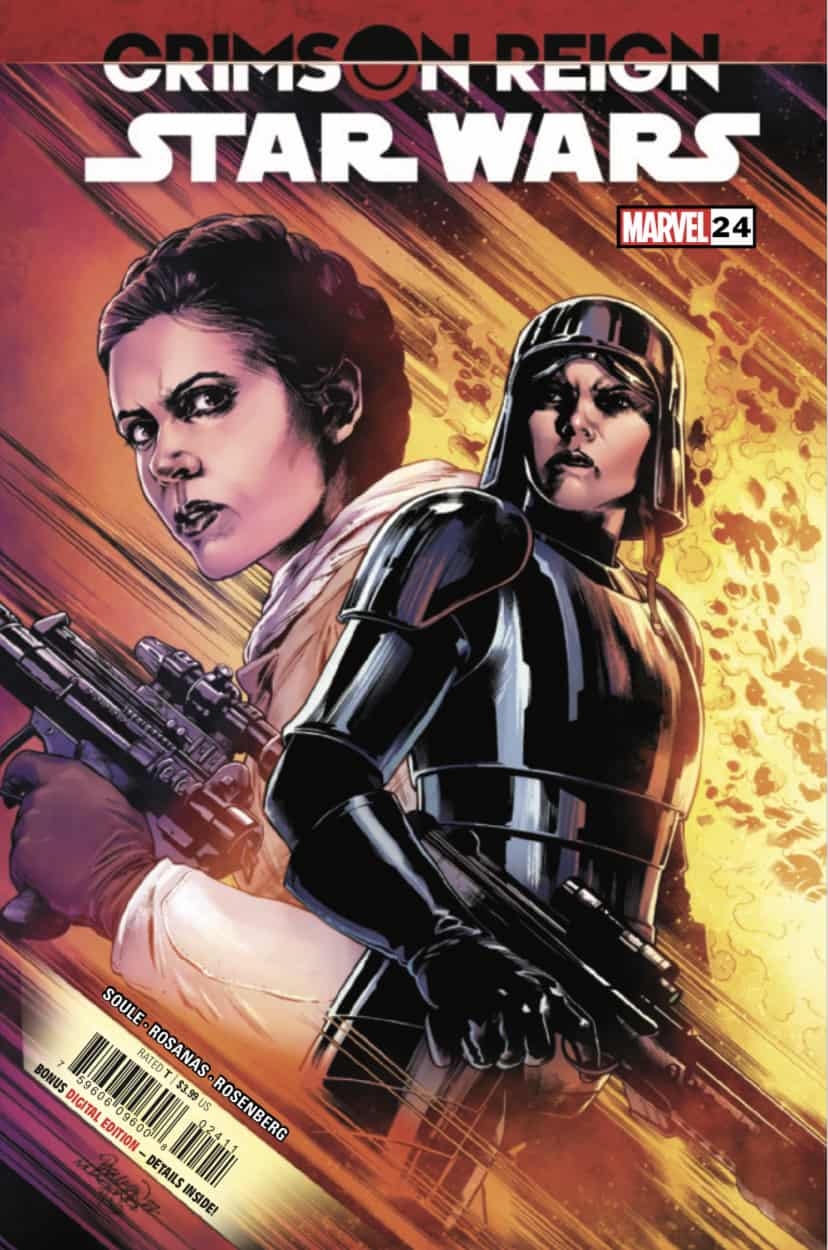 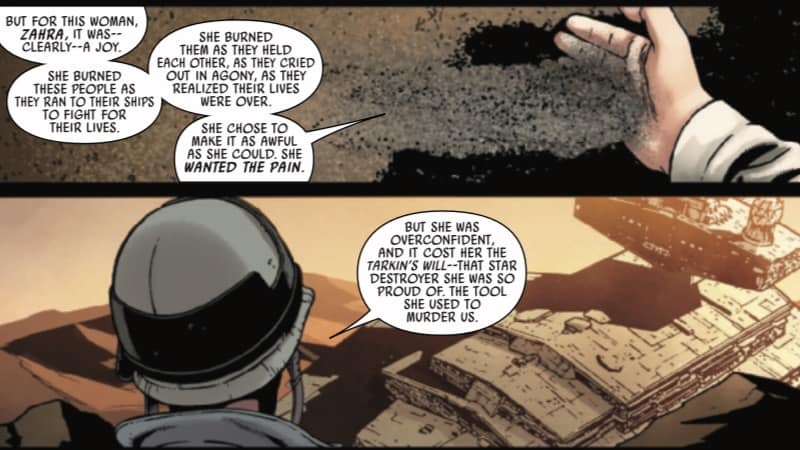 It’s been a long journey to get here. Commander Zahra has made good on her promise to avenger her dead mentor, Grand Moff Tarkin, by wiping out most of the Rebel Alliance. After going for her main prey, a rebel princess warrior who was integral in destroying her teacher, she finds herself alone and hunted by the rebels she recently hunted herself.

It has come to pass, a long epic multi-year series spanning story reaches its conclusion. The “Star Wars” series has always been the flagship of the modern era of the famous space opera’s run with Marvel. It has focused on the main characters from the original film in all three series bearing the title “Star Wars.” This series picked up right after the events of The Empire Strikes Back and fills in some of the one year gap between that film and Return of the Jedi. A big lingering question since the original trilogy was released is addressed with this series. Why did it take Luke and Leia so long to go rescue Han? The short answer is that they were simply busy. This series provided the long answer, Leia and her group was being hunted by Zahra, while Luke trained to become a better Jedi and unlock any Jedi knowledge he could find. The series came with a main villain, which is something the first two series lacked. That villain is Commander Zahra, successor to Tarkin, and survivor of the Battle of Yavin. She is a character that has an understandable hard earned hatred for Leia. 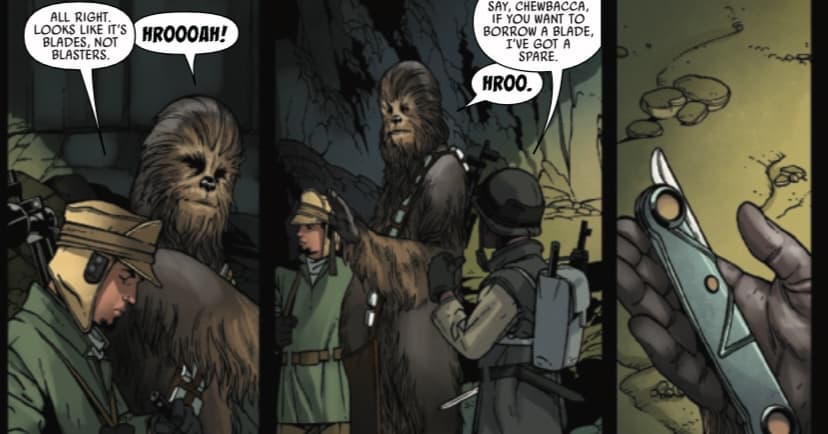 The very pest part of this issue, and by extension the entire series, is the sheer resolve of the Leia’s rebels. They have been beaten in pretty much every way possible, which is typical of the rebels. Yet the use their unrelenting hope to fuel them to find a weakness in an insurmountable enemy and exploit it, which is also typical of the rebels. That’s how they got the Death Star plans. That’s how they destroyed the Death Star itself, and that’s how the took down Zahra’s ship and crew. Now their greatest enemy of the past few months is alone and trapped. Yet a trapped cobra is still a cobra. As much as the rebels troops and Starlight Squadron exemplify the ideals of eventual victory through determination and hope, Zahra proves she is the monster she is. Leia points out early in the issue how Zahra is not just an enemy, but one who delights in destruction and pain. That is not only the basis of a good Star wars baddie, but a comic book villain in general. She is akin to Magneto, or Dr. Doom in many respects. 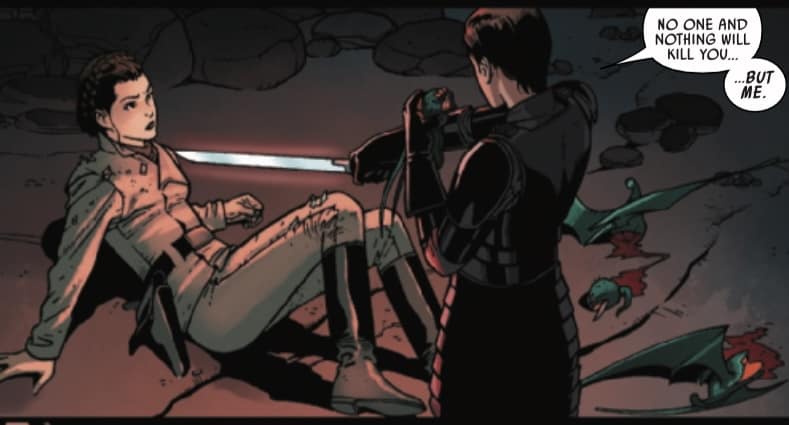 This issue continues the unfortunate trend of it predecessors by being not at all great at capturing the likeness of Carrie Fisher as Leia. Chewbacca is a bit hard to miss though. He does look as he is supposed to. The other characters don’t even have a film presence, and still they seem generic. Yet that does not at all detract from the greatness of this issue. Leia and crew are effectively represented by context, which allows the heart of the illustration to depict action and the issue is stronger because of it. The colors are not the full spectrum, favoring green and red, but still stunning. Those are important opposing colors as far as “Star Wars” battles between good and evil are concerned, so that is more than appropriate. Its hard to deny the inevitable impact on the storyline as it is and end chapter. It is a basically a given that it is an important piece of the story even if it fell short of great. However, this ending is satisfying and certainly a worthy ending for a twenty four issue series. 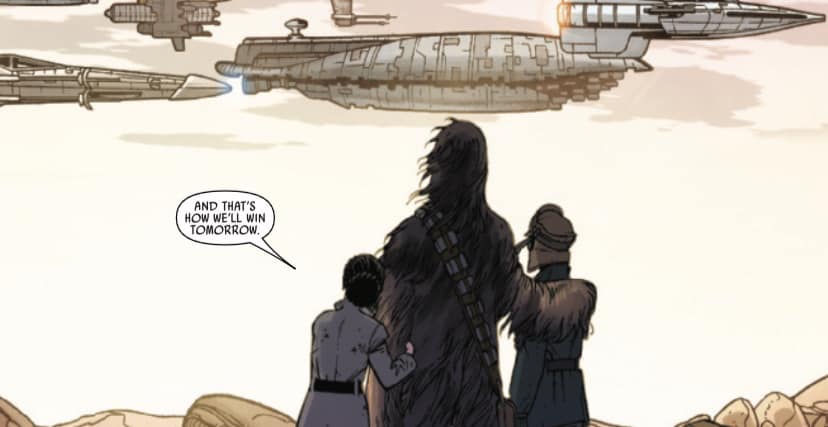 Leia is safe for now. Luke remains in search of a way to make him strong enough to confront Vader. Soon they must come together so they can formulate a plan to rescue the frozen Han Solo. What adventure await them before then?