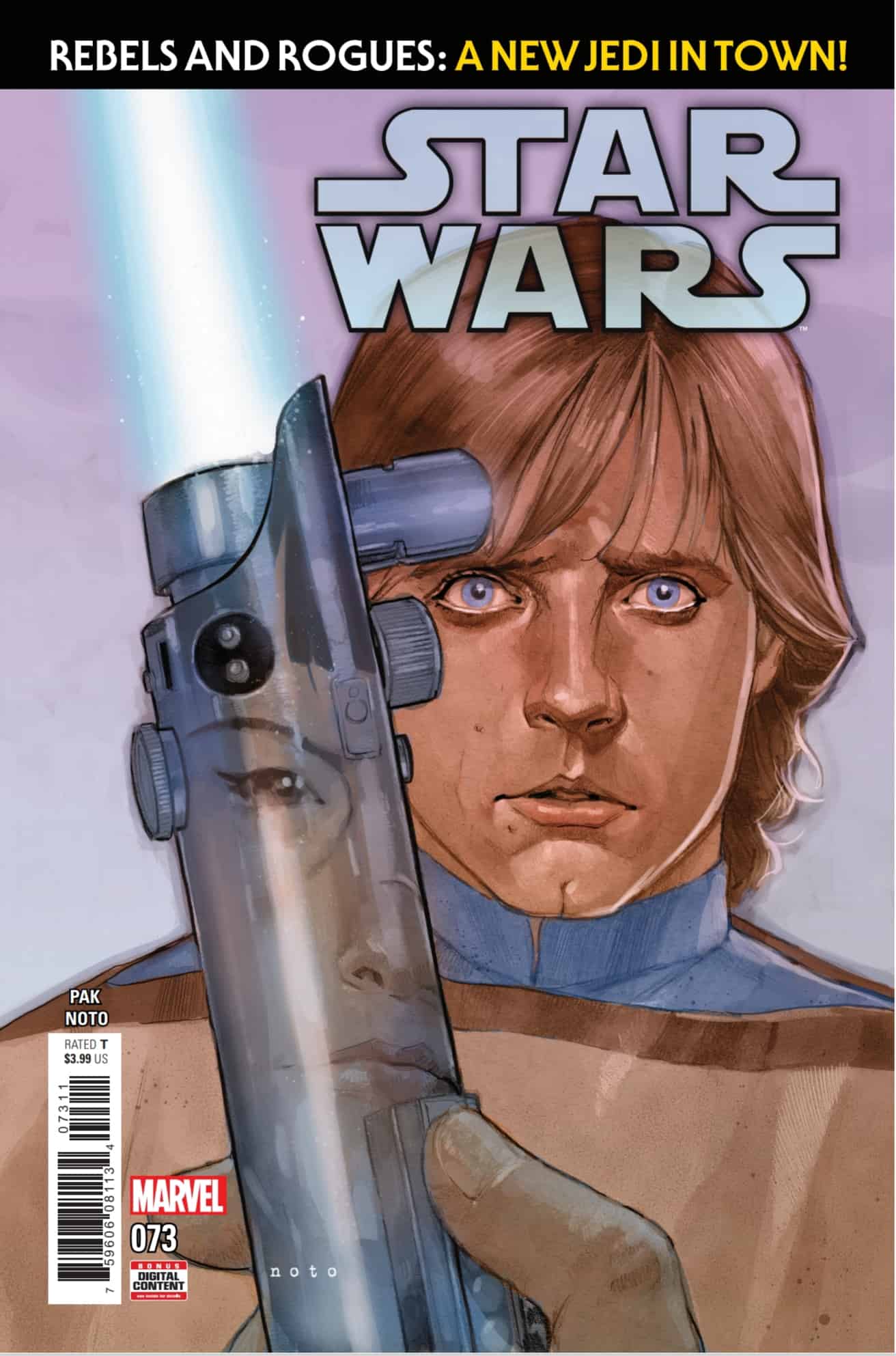 Threepio and Chewbacca are on a mission to lure Imperial ships into a trap. However, they have manged to lure Darth Vader instead. Han and Leia scheme to pit an infamous crime boss against the Empire in order to kill two porgs with one stone. Meanwhile, Luke struggles with protecting a hidden group of Rebels while learning more about The Force.

This story line has struggled for the first five issue thus far, but manages to find its stride in this sixth issue. The main crew has been split into three different groups on three different missions. Lots of pointless dialog and lack of action seems to come to an end in this issue. Chewie is being chased by stormtroopers, leaving Threepio to face Vader. Han has been captured by the crime boss he was supposed to be double crossing. Leia must recalculate her plans. Finally Luke, must chase down the thief who stole his father’s lightsaber. It already sounds more exciting. The most awkward part of this arc has been the three separate missions with no connection between them, which is also something that made The Last Jedi a rocky addition to the film franchise. Luckily, that all ends as the gang finally finds a way to intertwine their mission to accomplish their goals. Now the story really picks up.

There is a ton of action in this issue. Luke steals a speeder speeder in a chase to get his saber back. Han is strung up, beaten, and almost tortured. Vader turns his rage on Threepio. Most importantly, Han and Leia get to blast off into space and off the planet they seemed to have been on for what feels like forever. Yet as much as it is nice to see more action return to this series, some of the art has a hard time portraying it. Maybe it is the rush to finish up this series with a very limited number of issues left, leaving  artist Phil Noto having a hard time matching the increased pace. Vader keeps swinging his blade, but its hard to tell at what exactly. It took a while with multiple views to really get what is actually going on in his attack on Threepio and the rock people of planet K43. Luke’s chase was done much better, and much more representative of the kind of high speed action Star Wars is known for.

While this particular chapter has fixed a lot of problems the series has been having lately, there is still one pressing concern. There are only two issues left in the entire run. The series promises to go straight up to the founding of Echo base on Hoth. It seems so unlikely at this point that fans will get anything but a passing glimpse of Hoth. A new series starts in 2020 with a new team, but it is said to continue after the events of The Empire Strikes Back. It is disappointing to know that the rebels actually establishing Echo Base will be overlooked. It would be neat to see how they hollowed out hallways and rooms in the ice of Hoth, or perhaps how they discovered and trained Tauntauns for riding. With only a couple issues left, and a story arc with clearly more story to tell, it seems doubtful this will be covered.

It is absolutely satisfying to see this series get out of the quagmire of boring storytelling. It is important that this series goes out with a bang instead of a whimper. With the cover art of the next issue portraying the mighty Chewbacca facing off against Dark Lord of the Sith Darth Vader, it looks like fans might actually get an epic conclusion to Marvel's longest running series of modern Star Wars comics.