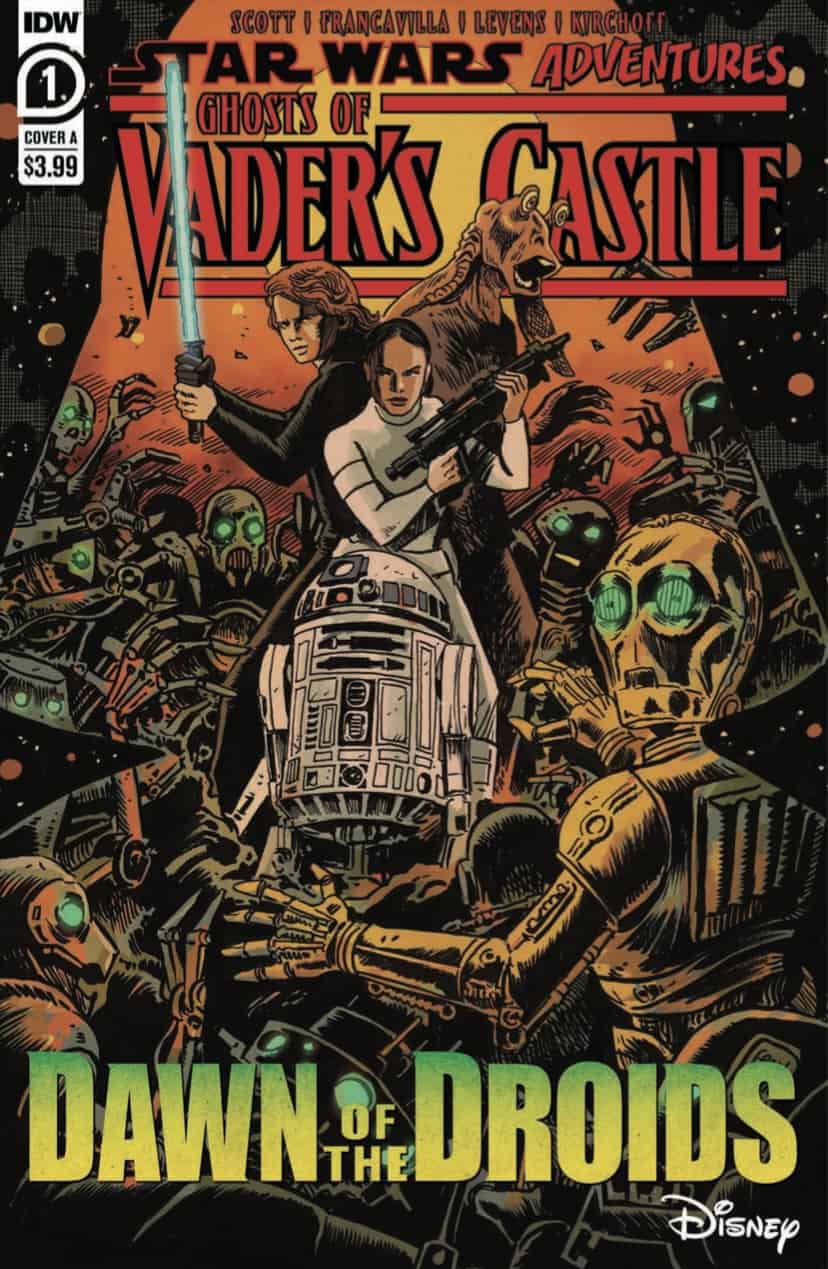 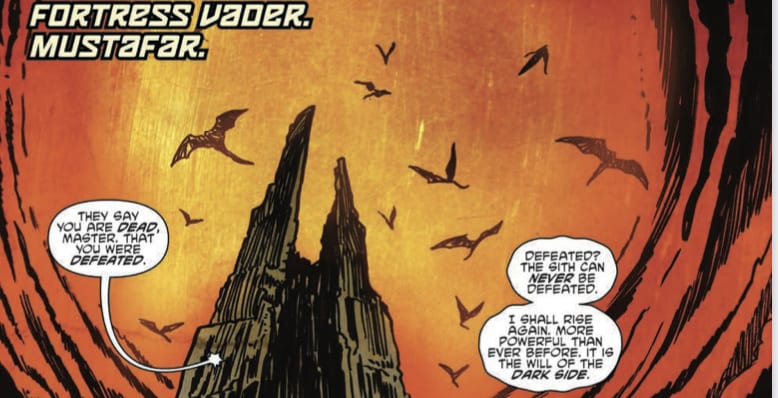 Following in the yearly tradition of the “Vader’s Castle” series, this new addition continues to explore the horrors of Darth Vader’s fortress on Mustafar as a background to various ghost stories told by Milo Graf. Despite the fact that the Sith Lord is dead, his attendant Vanee continues to try and resurrect his former master.

It is that creepy, kooky, mysterious, and spooky season, which means it’s time to return to Vader’s Castle for more tales of Terror in this fourth incarnation of the series. This year the series returns to its weekly month long issue run as the first two series had. Last year IDW only released a single double sized issue, so it’s nice to see this format return. The regular multi-issue series allows for more robust storytelling, with each issue getting its own full ghost story. IDW does an amazing job with all of their “Star Wars Adventures” comics, blending in different artists to create an anthology of various short stories. “Vader’s Castle” is arguably the best version of that formula. It is fun, colorful, scary, and accessible to readers of any age. Previous series have even added some useful bits of canon to the overall Star Wars universe, and has even brought back into canon many concepts from the previous Expanded Universe or Legends continuity. 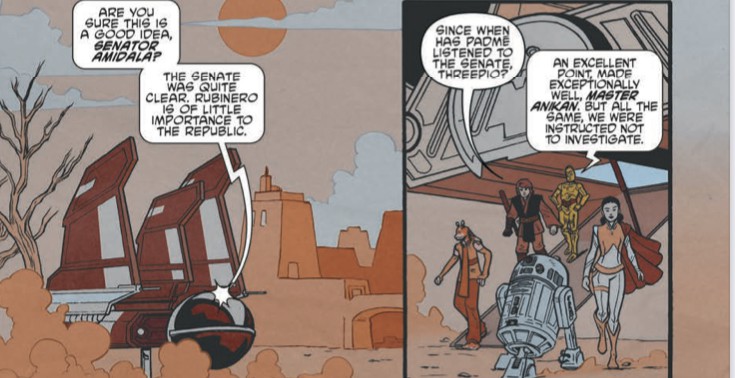 This issue seeks to continue a storyline that was originally part of the second series, “Return to Vader’s Castle,” where Lina Graf and a handful of other characters manage to escape Vader’s fortress after being subjected to tales of horror that Vanee tells them. In this series Vanee seeks revenge on the small band, including Lina. Each issue seemed to be a Star Wars take on classic horror films like Frankenstein and Little Shop of Horrors. This first issue of “Ghosts of Vader’s Castle” picks up on that theme as the first issue’s story is based on classic zombie movies. In fact, the issue is called “Dawn of the Droids” in reference to the zombie movie “Dawn of the Dead.” In this version, the zombies are droids that get infected with a virus and begin to shuffle about in an undead state while looking for living victims. This story stars Anakin Skywalker, Padme, Jar Jar, Threepio, and Artoo. It makes great use of the zombie movie stereotypes by having  Threepio infected first, showing that no one is safe. Other characters follow as the events proceed, which is exactly how the best zombie films go. One of the neat things that sets this zombie tale apart from more traditional ones is the concept that even Anakin’s robot arm is susceptible to the zombie virus. 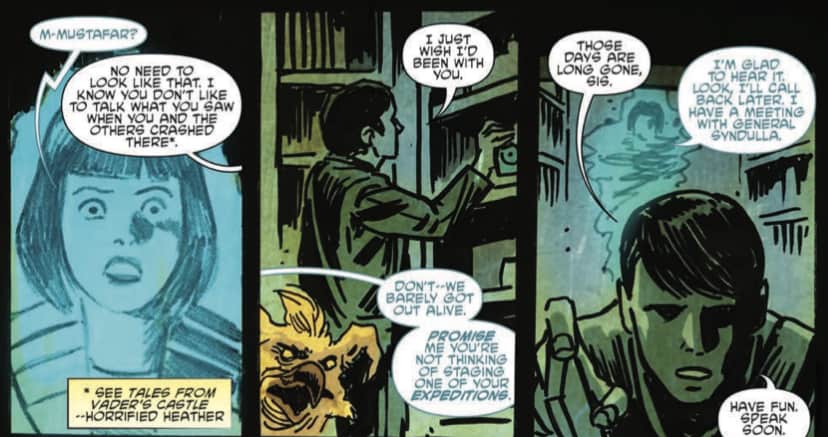 The overlying story in this series is that Vanee is trying to conjure Vader’s evil spirit. Meanwhile Lina’s brother Milo Graf is trying to reorganize the Graf Archive on Orchiss 2, which has recently been reclaimed in the wake of the Empire’s defeat. He tells his droid about a creepy dream he had, which is the device that allows for the droid zombie story to take place within the context of the actual story. It is important to note who Lina and Milo are. The Graf siblings originally appeared in the Adventures in Wild Space junior novels by this series writer Cavan Scott. Later Milo’s grandson Emil was a featured character in the “Star Wars Adventures” comics as a Resistance era storyteller and adventurer. The Graf family has even been given a much larger backstory as they exist in the High Republic series, also written by Scott,  taking place over two hundred years prior. Having the second series focused on Lina and this series focusing on her brother Milo is simply perfect as it brings all those elements together. This issue promises more from Milo when an element from his zombie dream story bleeds into his adventures, which will undoubtedly lead him right to Vader’s door. 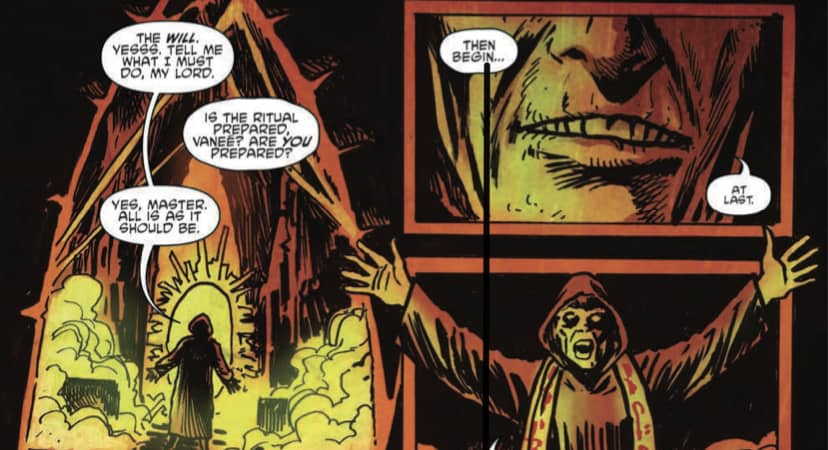 The stage has been set. Vanee continues his plot for revenge, while Milo Graf finds himself in danger. There is sure to be more stories of terror and misfortune as all paths lead back to Vader’s Castle.